Lego™ bricks let you create entire galaxies, so why shouldn’t you be able to create Porsche race cars too? Malte Dorowski does just that, but not by relying on ready-made construction kits.

From time to time, Malte Dorowski has a distracted air as he sits at the breakfast table. His large brown eyes look serious, focused somewhere in the distance. “At first, my wife would always ask me if everything was OK,” he says with a sheepish, apologetic smile. These days, Mrs. Dorowski knows there’s nothing to be concerned about; her husband is simply mulling over a design problem. For instance, whether the elephant’s tusks could be used as wheel spacers on the wheel arches. This may sound rather odd, but it isn’t. Not at all.

After breakfast, Dorowski heads off to work, his real job. Then, in the evening, he checks out his idea of using the tusks. He has his own room for working on this: a Lego room. As almost everyone, young and old, knows, Lego are those colorful plastic bricks that can be pressed together to create an endless variety of shapes. Since the 1950s, Lego bricks, which were invented by a Danish carpenter, have been part of children’s lives all around the world. But Lego is more than a toy; it’s a legend.

From finger exercises to Porsche

Dorowski is 32 years old. Trained as a digital media designer, he now works for a large online portal in northern Germany. His business card reads “Marketing Management,” but the young man prefers staying in the background. He has a three-day beard and is wearing a hoodie and classic sneakers. If there is anything conspicuous about him, it’s his joy in childhood, some of which he has managed to keep into adulthood. Dorowski has built every car available from Lego as a construction kit. But at a certain point, using instructions to press bricks together and build a fire truck lost its charm. Those were nothing more than finger exercises. And this realization brought him to Porsche.

Now, that was a challenge: to recreate these race cars’ distinctive silhouettes on his own. To achieve this, he doesn’t use drawings, only the genuine article on four wheels. This inventive Lego fan needs plenty of imagination, because he wants the details of his models to be as accurate as possible. “The curving line above the rear wheel arches that gently drops down to the rear—that is quite difficult,” Dorowski says, his eyes aglow.

Dorowski has built more than thirty Porsche models over the course of four years. Each one of them at a scale of 1:16 or 1:17. To keep things exciting, he has set himself some strict rules: he uses only the original bricks as offered by Lego, and they are not to be chamfered or otherwise deformed. And with one exception, components are not painted. He does have the wheel rims chrome-plated, because, let’s face it, a blue or pink wheel rim would look rather strange.

Lego keeps children eager for more with a steady stream of new construction kits with a wide variety of play themes. There are scuba divers and pirates, robotic fantasy figures and superheroes. Dorowski makes use of these themes: the scuba divers’ black harpoons are transformed into windshield wipers; the hook used for pirate figures makes a great connector for the roll cage. Once upon a time, the bucket-­seat frame was a window grille in the Lego prison.

Only tool is a pair of tweezers

The playground for Dorowski’s passion is kept simple: a den with a desk. The only tool? A pair of tweezers. The desk is surrounded by twenty plastic boxes in which Lego bricks are sorted by shape. The small parts have been placed in drawer inserts for cutlery. On occasion, Dorowski also visits his parents when he wants to confirm his suspicion that there’s a special part still in his old room that is exactly what he’s been looking for. For example, for the contoured cover on the dashboard: “That used to be a superhero’s black cape—I think it was Batman’s.”

Serious Lego designers are part of a global Web community. They exhibit their models and post photos of their creations on the Internet. Here, Dorowski is a star. Time and again, someone will ask him for construction drawings; some of his fellow players even offer money. But that goes against his honor code as a designer. Besides which, the design for the white Porsche 908 driven by Steve McQueen exists only in his mind. “If I had to set it down on paper,” he says modestly, “that would be work—and I do all of this strictly for relaxation.”

Instead of selling a construction manual, he’d rather keep working meticulously on his projects until a convertible soft top is replicated so precisely that it can be folded and stowed away. These kinds of thoughts run through his mind at breakfast. He’s putting a great deal of thought into a big project for solving an important problem that his hobby has created: he wants to build the Porsche Museum to house his models in the style they deserve.

Dorowski has brought his favorite Porsche models to the studio. Before the photographer presses the shutter, master designer Dorowski carefully blows a puff of air over an independent wheel suspension, just in case a speck of dust might have escaped detection. He gently presses a rear wing closed. We can safely assume that his son is treated even more gently, so one-and-a-half-year-old Paul must be a very happy child. Of course, he is already playing with Lego. But with the big Duplo bricks designed for little hands.

Nonetheless, his father is already anticipating the coming dilemma: What is he going to do when Paul is old enough for the smaller bricks? Is Paul going to be allowed into the Lego room? What if he brings chaos into the order of the design studio? Or just imagine what would happen if he let the red Porsche 917 short-tail fall from the shelf and it flew into 1,523 pieces? Malte Dorowski gazes confidently into the future, saying, “I’ll have to figure something out.” 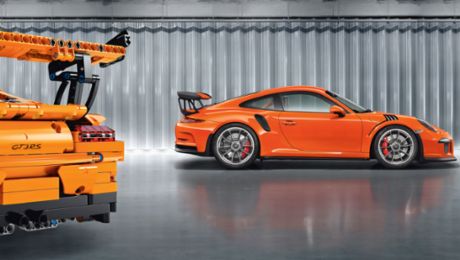 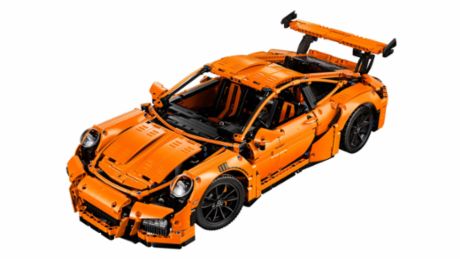 Porsche has been working with PLAYMOBIL and LEGO to develop playsets.