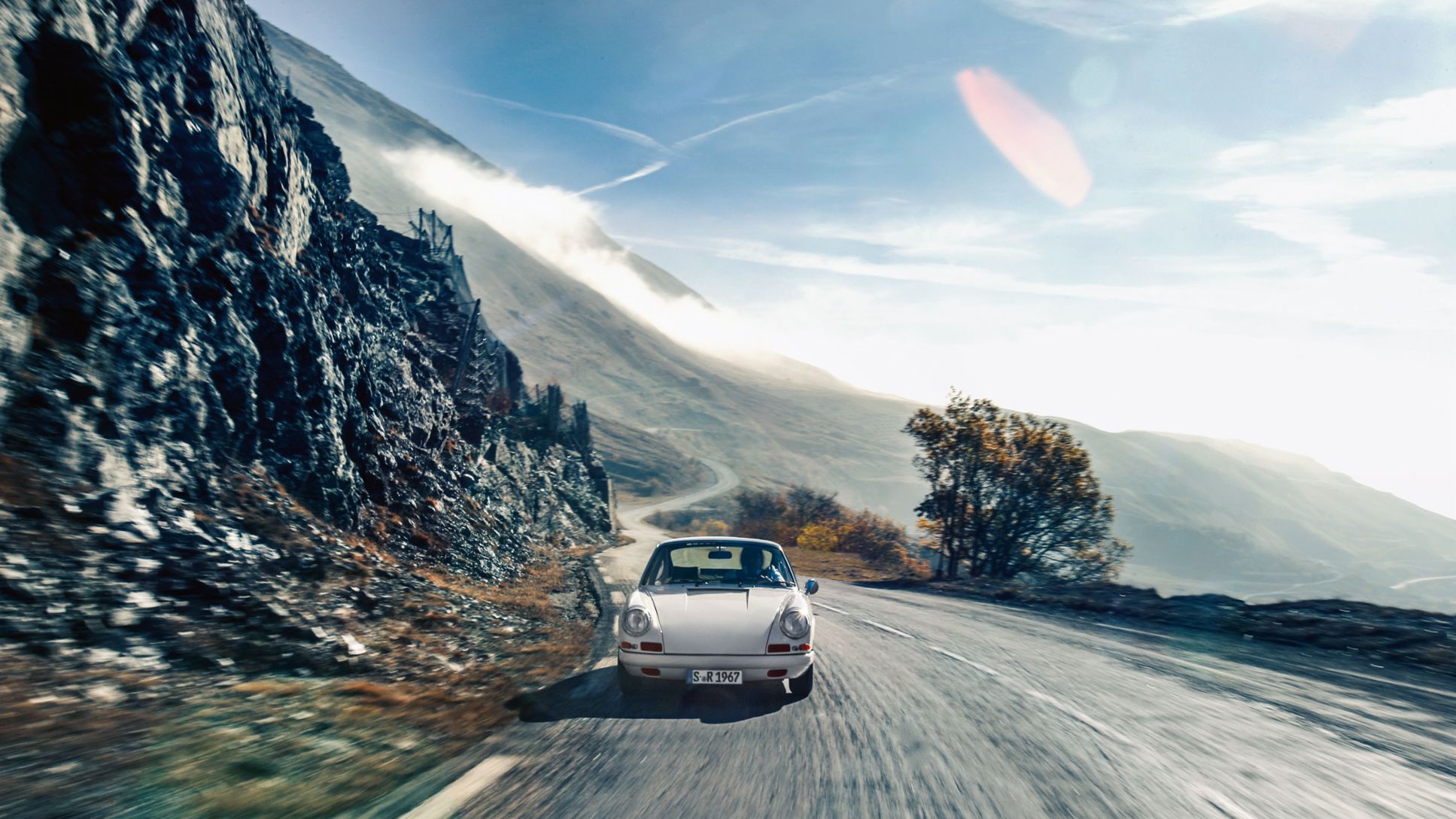 Triumph on the Wall

Fifty years ago a Porsche 911 R traversed the French Alps. Its destination: the Autodromo Nazionale di Monza. Once there, Porsche conquered five endurance world records. A classic 911 R now retraces that journey on its fiftieth anniversary.

It all began over a glass of beer on a summer evening. And any story that begins like that has to be legendary. That’s precisely what went down in Christophorus number 90 of January 1968. Thus began the article by Swiss race-car driver Rico Steinemann, in which he reported on a dramatic endurance-record drive in Monza. The fiftieth anniversary of the triumph on the banked corners of the Autodromo Nazionale di Monza is now in full swing. Porsche collector Johan-Frank Dirickx and journalist Bart Lenaerts, both Belgian, marked the anniversary by retracing the drive from Zuffenhausen to Monza undertaken by the record-hunters fifty years ago in a 1967 Porsche 911 R—one of just twenty units built. The route took a bit of a detour through France, as that was necessary at the time. Why? Well, the story began on a late summer evening over a glass of beer.

Around the table were Rico Steinemann and his racing colleague Dieter Spoerry. Still in the midst of the 1967 racing season with their Porsche 906 Carrera 6, they were thinking of the off-season to come that autumn and winter. Out of nowhere came the idea: what if they were to break the endurance world records for seventy-two and ninety-six hours, for 15,000 and 20,000 kilometers as well as 10,000 miles (16,093.4 kilometers)? They had once belonged to Porsche, but Ford and Toyota had since bested the old records. By the time the final swigs of beer had been drunk, the plan was in place: go for it!

“All races, but especially endurance races, were extremely important to us in order to gain new technical insights,” says Peter Falk, eighty-four, who headed up pre-series and racing development for Porsche at the time. It was the pre-digital age, and computer simulations had not yet come to the automotive industry. Technical solutions had to be field-tested to see if they actually worked. Falk adds, “That and, of course, the hope for success and good press were the reasons why Porsche supported the record attempt.” The endeavor was organized by BP Switzerland, and Firestone supplied the tires. Swiss drivers Jo Siffert and Charles Vögele rounded out the squad, ensuring the team had enough drivers to endure the four-day record-breaking attempt.

The record chase began on October 29 at the stroke of noon. Jo Siffert was first up. A stint at the wheel lasted one and a half hours, followed by four and a half hours of rest. For the mechanics in the box, the Scout motto “Be prepared!” was the perpetual order of the day. Günter Steckkönig, suspension expert for Porsche at the time, recalls: “When the engine sound was uniform around the oval, we relaxed. We could have a bite to eat or even stretch out in the motorhome.” But the sound grew quieter in the dead of night, and the Porsche 906 rolled into the pit with a broken shock absorber piston rod. Steckkönig and his colleagues replaced the spring strut in a flash, but shortly after there was another unscheduled stop. This time it was the other shock absorber piston rod. Again, the repair was carried out, and the car got back out on the track—until the front left spring strut pivot point on the tube frame tore out.

That meant the end of the show after just about twenty hours. The rules of the international motorsports federation FIA stipulated that all spare parts in an endurance record attempt had to be carried in the car. All that was allowed in the pit were spare wheels, jacks, spark plugs, gasoline, and oil. The team had been ready for everything, except for the astonishingly poor condition of the two banked curves in Monza: the concrete walls built in 1954 with inclines of up to 45 degrees had potholes the size of soccer balls. “It was like a washboard,” says Steckkönig. It was, in any event, too violently bumpy for a lightweight race car like the Porsche 906. But there was still hope. The rules allowed a restart of the record attempt within forty-eight hours. A hectic long-distance call between Monza and Zuffenhausen ensued, and an emergency meeting was held. The decision: we’ll give it another go—with a Porsche 911 R. Two of them were available in the Porsche testing department. But the clock was ticking. The cars had to be sent down to Monza as quickly as possible—one as a race car and the other as a parts donor. While the Porsche engineers readied the transmission of the 911 R slated for the record attempt by installing a second fifth gear in place of the fourth gear, mechanic Heinz Bäuerle hit the road to Monza in the second 911 R.

A furious, all-night detour around Switzerland

A few hours later Bäuerle called in from the Swiss border: the Swiss police wouldn’t allow the car into the country, deeming it too loud. There was only one thing Bäuerle could do: make a furious, all-night detour around Switzerland via Lyon, Grenoble, and Turin on the way down to Monza. Peter Falk and engine expert Paul Hensler, who had both embarked in the other 911 R after Bäuerle’s call, naturally opted for the more direct route through Austria and over the Brenner Pass. They arrived on Tuesday morning; by then the other 911 R had already been dismantled. The spare parts were ready for action.

Half a century later, the drive is considerably easier. Johan-Frank Dirickx and Bart Lenaerts don’t have to race against the clock; on the contrary, the two can relax and enjoy the pass roads. They pass Lyon and Grenoble in their identical remake, stop a number of times, take a few pictures, and revel in the road trip.

Fifty years ago the situation was much different: it was dark and raining cats and dogs when the record attempt was restarted at 8:00 p.m. on Tuesday evening. Right away, in the first few hours, there were difficulties with iced-up carburetors, but the BP colleagues resolved that with an injection additive. To help protect the suspension, Peter Falk spent the afternoon marking the biggest potholes on the banked walls with long white arrows on the track. This enabled the drivers to take the potholes between the wheels and thus avoid the most bone-jarring bumps. It worked. The 911 R went about its business with its familiar roar, the rain stopped, and Wednesday and the second night passed without incident. The pit stops took little more than a minute. Ninety liters of gasoline, top off the oil, clean the windshield, check the suspension—it was literally a well-oiled machine in action. Not that the 911 R emerged entirely unscathed from its ordeal: damage to the front damper struts on both sides necessitated a pit stop, where once again Steckkönig and the mechanics repaired the sports car in a flash. In accordance with regulations, the 911 R had the spare damper struts on hand.

It was wet again on Thursday evening. The problem this time was that there were no more rain tires. So the Firestone experts cut rain grooves into the dry tires by hand. The drive continued through the night and the rain, guided by battery-powered lamps on the banked curves’ lower boundaries that gave the drivers at least some range of vision at over 200 kmh. “I still remember how driver Charles Vögele sat there in the pit after his stint, absolutely exhausted, recounting how he had been driving into the banked corners almost completely blind,” recalls Steckkönig. “Those were some tough guys.” The ristorante at the Autodromo was open around the clock during the record attempt. “One time I ordered breakfast at eight in the evening,” recalls Rico Steinemann.

On Friday evening, the tension reached a fever pitch. Had the grueling ordeal paid off? At around 7:00 p.m. it was confirmed: they’d driven 15,000 kilometers at a new record average speed of 210.22 kmh. Not long after that, Porsche set the seventy-two-hour record record with a speed of 209.94 kmh. Fog rolled in. Visibility was hardly forty meters. And yet the team still managed to set a new record shortly before midnight: 210.28 kmh over 10,000 miles. With another twenty hours of top-speed driving to go, two further world records were still waiting to be bested. The minutes dragged on. The drivers grew ever wearier. The rain picked up again. For its part, the 911 R seemed to feel just fine. After four days, at 8:00 p.m. on Saturday, the champagne corks went a-poppin’: the team had achieved 20,000 kilometers in ninety-six hours at an average speed of 209.23 kmh— in a car that, just a few days before, had been standing in the testing workshop in Zuffenhausen. All thanks to a team that remained unfazed by any circumstances.

Today the 911 R still feels great on the venerable old track: Dirickx and Lenaerts do their laps with the classic 911. Without rain tires, but with a bit of fall foliage whipping up around the purist sports car. The Porsche enthusiasts evoke memories of that triumph on the banked walls of Monza fifty years ago.