Six steps on the career ladder in just twelve years—Kerstin Hess earned an industrial engineering degree at a cooperative state university and went on to a top job at Porsche.

For those of you who already know at age nineteen where you want to be in your career at thirty-five, that’s great. But it’s still a good idea to read this article. Often things turn out a little differently than expected. And often that’s a good thing. In January 2020, Kerstin Hess (35) became the director of the department for financial strategy and organization—a top job at Porsche. That wasn’t the plan. If she had taken a different turn in her career, she might be doing cell research at an institute for biochemistry right now.

It doesn’t hurt to have a plan. But it probably does hurt to become fixated on promotions. “The content of the job has to make sense,” she says. “If I’m offered a position where the next strategic step is already evident, I’m wary. Because if I’m not engaged with the work itself, I won’t be good at it.”

Kerstin received her high school diploma in the town of Sindelfingen after taking advanced classes in mathematics, biology, chemistry, and physics. With a Daimler plant nearby, she considered studying something to do with cars. Or would it be better to major in mathematics? Or mechanical engineering? But where would those degree programs actually lead? “Then I found a cooperative program in industrial engineering. It was a good combination for me. I liked the fact that the company lets you get an idea of the day-to-day work, and the types of future careers you could have.”

“You shouldn’t go running after a career at all costs.” Kerstin Hess, director of the department for financial strategy and organization

She began a cooperative program in 2004 with Porsche (“that’s where I wanted to end up”) and what was then the Berufsakademie Stuttgart. Women accounted for only 20% of the industrial engineering students. That has changed, and they are now also well represented in mechanical and electrical engineering. At twenty-two, Kerstin wrote her undergraduate thesis on financial strategies. But there weren’t any job openings in the finance division. Here was another crossroads: what should she do now? Should she stay at Porsche? She did stay, working in procurement, where she was responsible for purchasing media, print, video, and other services. Shortly thereafter, the financial strategy department asked if she was interested in transferring to them as head of a supplier risk management project. Yes, she was. Because the content of the work made sense. She describes herself as “on the risk-averse side,” or, in other words, as a careful individual. She now began managing insolvent suppliers, and the everyday work with balance sheets brought her back into the financial strategy world.

“When the opportunity arises, take it!”

Gut feelings, courage, and the ability to make decisions are more important than a strict career plan. Or, as she puts it, “When the opportunity arises, take it!” When the board member in charge of finances was looking for an assistant, she applied. Her colleagues advised against it, saying that changing positions after only two and a half years could be seen as disloyal and that short stints do not look good on résumés. “But I didn’t care because I was interested in the work itself,” she says. Looking back, the switch was a crucial step. She showed what she could do, earned the confidence of the board member, and was appointed head of risk management at the age of thirty.

When her husband took a job in the US in 2018, Porsche enabled her to get a part-time position at Porsche in Atlanta. That worked out well. Kerstin could have let things rest there. But she didn‘t. She enrolled at a university in Washington, D.C., to build on her cooperative work-study degree. She stayed in contact with the headquarters in Zuffenhausen, and visited every few months. Her return in January of 2020, with a promotion to director of the department of financial strategy and organization, was like going home.

That was not planned. But as Kerstin says, You shouldn’t go running after a career at all costs. That makes you tense. Instead, you should stay in touch with the right people, maintain contacts, and build networks. That’s what helps.” 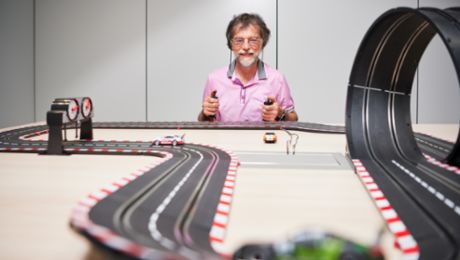 Between Hype and Revolution

Electric cars will bring fundamental changes to mobility in the future—and therefore also to car makers, in the form of new opportunities. 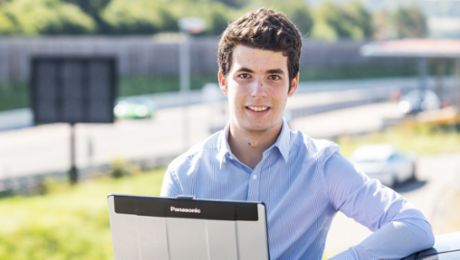 The first day of work for Alejandro Sarró as an intern in the field of cooling circuits and battery conditioning. 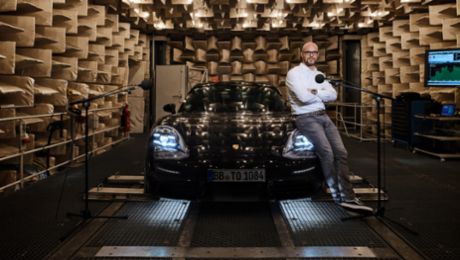 Tobias Hillers quickly realized how important the sound of electric cars would be. Now his team has created an unmistakable sound—that of the new Porsche Taycan. 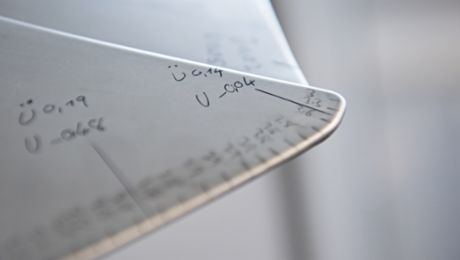 First the tool, then the form

Who made the deep-drawn fender on the Taycan possible in the first place? Michael Mohe and his team in the Saxon town of Schwarzenberg.