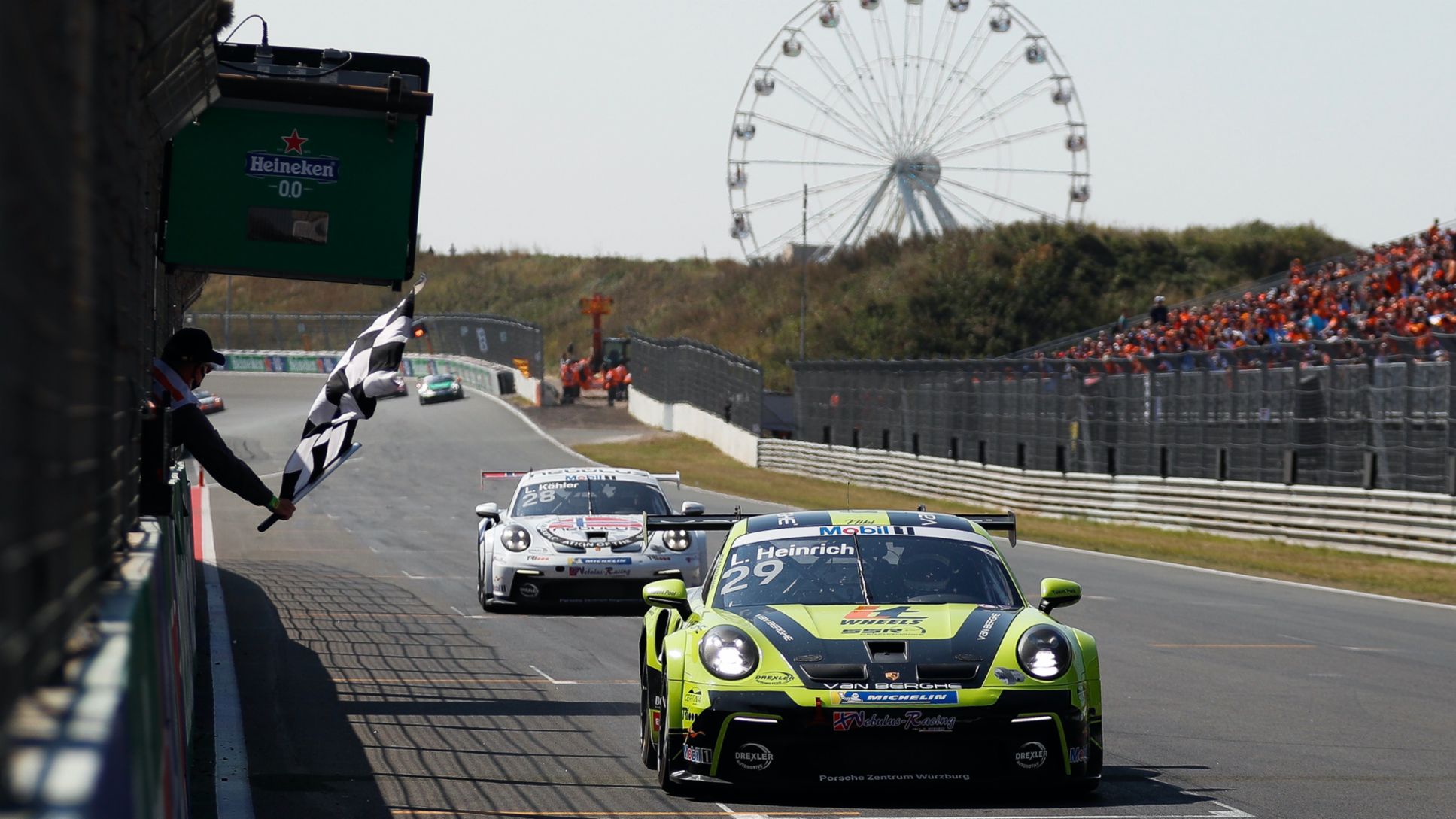 It was a weekend for the newcomers in the Porsche Mobil 1 Supercup: Rookie Laurin Heinrich won round six on the Circuit Zandvoort ahead of Leon Köhler.

The two Germans compete for the Nebulus Racing by Huber, which celebrates its debut season in the international one-make cup with the Porsche 911 GT3 Cup. Heinrich and Köhler even took up the 16-lap race on the Dutch Formula 1 circuit from the front grid row. At the flag, the 19-year-old from Würzburg and the 22-year-old from Kleinwallstadt in Franconia were a full four seconds ahead of the pursuing pack.

“Pole position and victory in the Supercup – what a perfect weekend. I was cautious with my tyres during the race and managed to pick up the pace a little whenever Leon got closer,” revealed Heinrich. “Laurin had the advantage in the fast corners, and I was better in the slower ones, so I never really got the chance to launch a serious attack. Still, I’m super happy with second place,” concluded Köhler. “As far as I’m concerned, both are winners today,” said team boss Christoph Huber in praise of the pair. “We’ve steadily improved since the beginning of the season and now we’ve been rewarded with a one-two result – I’m mega proud of my squad.”

For Oliver Schwab, Project Manager of the Porsche Mobil 1 Supercup, the success for the Nebulus Racing by Huber team was further proof of the one-make cup’s winning formula: “We constantly strive to attract the best teams from the national Porsche Carrera Cups to the international Supercup. This strategy has proven itself to be spot on again this year. Congratulations to Christoph Huber and his team.”

Thanks to his maiden Supercup victory, Heinrich has moved up the leaderboard to rank third overall and has also extended his lead in the rookie standings. Nicolas Misslin (Pierre Martinet by Alméras) achieved a similar feat. The Monegasque won the ProAm category for the fourth time and has thus expanded his lead in this category.

Behind Heinrich and Köhler, the Dinamic Motorsport driver Simone Iaquinta celebrated his best Supercup result to date with third place. “I got off the line perfectly and was able to immediately overtake Ayhancan Güven. He then attacked over the entire 16 laps but I didn’t let him rattle me,” commented the defending champion of the Porsche Carrera Cup Italy. Porsche Junior Güven paid his respects: “Simone made a strong move at the start – after that, I had no real chance to overtake. Still, I’m pleased to take home the points for fourth place,” emphasised the BWT Lechner Racing driver from Turkey.

Points’ leader Larry ten Voorde finished in fifth place. The favourite among the ten thousands of Dutch fans was very pleased with his performance. “I pulled off a super overtaking manoeuvre against Dylan Pereira – that was fantastic racing. Plus, I managed to extend my lead in the overall classification – what more could I want?” stated the reigning Supercup champion from the GP Elite squad. Jaxon Evans (Martinet by Alméras), ten Voorde’s only remaining rival in the fight for the title, experienced a race to forget. “I lacked the speed over the entire race weekend. Now I have to turn my full attention to the finale in Monza,” concluded the New Zealander, who finished in tenth place. As he heads to the doubleheader finale in Italy, his gap to ten Voorde is 25 points.

Nevertheless, Evans could still claim the title: Fifty points are up for grabs at the season finale this coming weekend – the Porsche Mobil 1 Supercup holds two races as support to the Italian Grand Prix in Monza (10 to 12 September 2021).

Surprise at the debut of the Porsche Mobil 1 Supercup at the Circuit Zandvoort. The Nebulus Racing by Huber squad has locked out first grid row for round six on the Formula 1 racetrack in the Netherlands. Laurin Heinrich from Germany, one of the rookies in the international one-make cup with the Porsche 911 GT3 Cup, secured pole position, with the second grid spot claimed by his German teammate Leon Köhler. Taking up the race on Sunday from position three is Ayhancan Güven (BWT Lechner Racing). The Porsche Junior from Turkey shares the second grid row with Italy’s Simone Iaquinta (Dinamic Motorsport). Larry ten Voorde (Team GP Elite), the current points’ leader, qualified on fifth place. The Dutchman tackles the race four places ahead of his closest rival in the fight for the title, New Zealander Jaxon Evans (Martinet by Alméras).

“That was a perfect qualifying. My second lap was the fastest. I think I would’ve been even quicker on the second set of tyres towards the end of the session, but at that point, the track was already very dirty,” said polesetter Heinrich, describing the conditions of the completely renovated Formula 1 circuit at the North Sea coast. Almost every little mistake here ends up in a gravel trap. When the cars return to the track, they carry tiny pebbles with them, eventually compromising the grip of the tyres.

Heinrich’s teammate Köhler was one of the few drivers who managed to post a better time on his second shot despite the deteriorating track conditions. “I changed the setup of my car between the first and second attempt. That worked much better,” revealed Köhler, who currently ranks sixth in the standings. Porsche Junior Güven plans to launch a gripping three-way fight with the two drivers from Nebulus Racing by Huber from third place: “Obviously I wanted more, but P3 is still a good starting position. Let’s see what I can do in the race.”

The qualifying session did not run too smoothly for championship leader Larry ten Voorde. “We tried something at the beginning and it didn’t work. We changed the setup and I managed to improve to fifth place on the dirtier track – that almost feels like pole position,” claimed the defending Supercup champion.

Laurin Heinrich originally comes from the digital sim racing scene and contests his first full season in the Porsche Mobil 1 Supercup. The 19-year-old from the German city of Würzburg is one of the so-called rookies at the wheel of the Porsche 911 GT3 Cup. These youngsters receive support from the Supercup organisation throughout the season, which includes coaching and special fitness training. The rookies also receive tips and advice from experienced professionals, including winners of the Le Mans 24-hour race. At the end of the year, not only the fastest rookie is awarded. The Porsche Mobil 1 Supercup also gives the winner of an internal assessment the chance to take part in training sessions and races on the Nürburgring-Nordschleife. The aim is to secure the permission to compete the 24-hour race on the famous German racetrack.

A vehicle that has already won the endurance classic on the demanding Nordschleife will be showcased to tens of thousands of fans at the Circuit Zandvoort this weekend. On Sunday, the Manthey Racing team’s Porsche 911 GT3-R – known as “Grello” by fans – will turn demo laps with historic racing cars from the Porsche Museum and special Porsche road cars on the Formula 1 circuit at the Dutch North Sea coast.

Round six of the Porsche Mobil 1 Supercup over 15 laps on the Zandvoort Formula One track kicks off on Sunday (5 September 2021) at 12:10 pm CEST. The streaming service f1tv.formula1.com and various TV channels provide a live broadcast. For further information on broadcasting stations visit: https://tinyurl.com/yhvnh2c3.