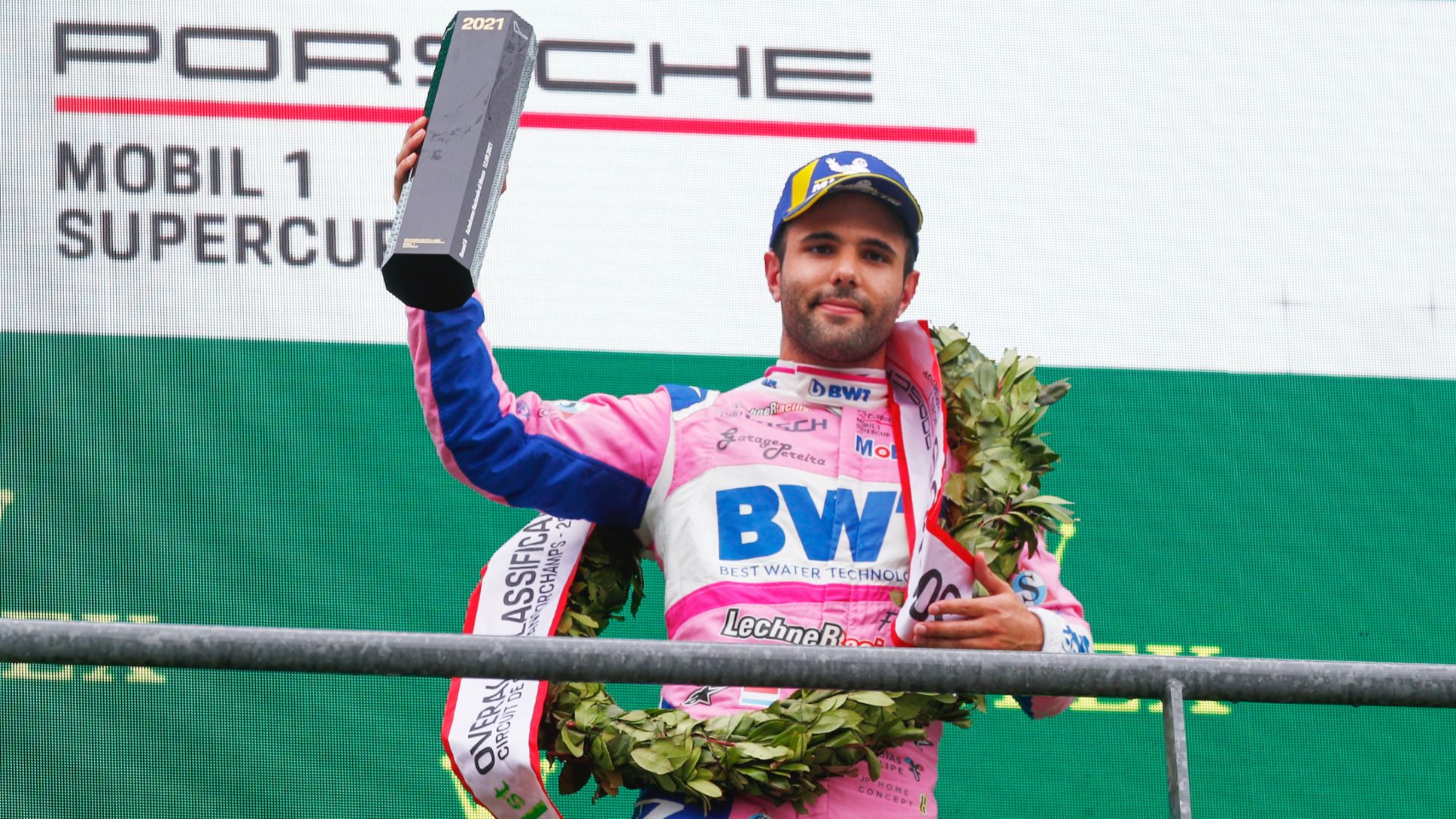 The 300th Porsche Supercup race turned out of be one of the most eventful: on the drenched Spa-Francorchamps Formula One circuit, Dylan Pereira survived the multiple spins and slides of other racers and three safety car phases to secure the win.

Luxembourger Pereira vehemently fended off repeated attacks from his Turkish BWT Lechner Racing teammate Ayhancan Güven to take the win in the anniversary race of the international one-make championship. With Güven ultimately taking second spot, Germany’s Laurin Heinrich (Nebulus Racing by Huber) rounded out the podium as the fastest rookie of the 32-strong field of Porsche 911 GT3 Cup cars.

Just metres after the start, a decisive situation unfolded in the infamous Eau Rouge passage. “I got away well at the start and was able to immediately go for Larry,” says Pereira. On the approach to Eau Rouge he pulled alongside pole-setter Larry ten Voorde from the GP Elite team. The two cars touched slightly – sending the Dutchman into a spin. “I was on a line offering less grip and that made me slide,” Ten Voorde later admitted. While the reigning champion rejoined the race action in 13th place, Pereira took the lead.

After another vehicle spun, the race director sent a safety car out onto the track as a precautionary measure. At the restart, Porsche Junior Güven grabbed his chance to attack the leading Pereira. He, however, defended his positions at the front. While the two 911 racers proceeded to pull clear from the rest of the field, Güven was unable to make another serious attempt to overtake his teammate.

Behind them, the battle for positions continued at full force – not always without contact. One of the victims was Jaxon Evans (Martinet by Alméras). After taking up the race from the third grid spot, the New Zealander, who currently ranks second in the series, was nudged into a spin by a rival, foiling his chances to earn points and close the gap to the overall leader Ten Voorde.

Meanwhile, the main protagonists in the fight for third place were Austria‘s Christopher Zöchling (FACH AUTO TECH), the two Germans Laurin Heinrich and Leon Köhler (both Nebulus Racing by Huber) and Max van Splunteren (Team GP Elite) from the Netherlands. The battle among this quartet was briefly interrupted by a second safety car phase caused by more spins. When the race director deployed a safety car for the third time due to a vehicle stranded in a gravel trap, Heinrich was running in third behind Pereira and Güven. Because the race ended behind the safety car, this order stayed the same. “I started from 10th place and finished on third – something like this can only happen in a wet race,” says a delighted Heinrich.

Thanks to his first victory of this season, Dylan Pereira has moved up the points standings to third place behind Ten Voorde and Evans. For this, the Luxembourger also received a laurel wreath in addition to the usual trophy, as did the rookie winner Heinrich and the Nicolas Misslin (Lechner Racing Middle East), from Monaco, as the best-placed ProAm driver – a fitting homage to the long and successful history of the Porsche Supercup.

“The 300th race of the Porsche Supercup was certainly one of the most exciting – a worthy anniversary. Despite the cold weather, we witnessed spirited fights for positions. My congratulations go particularly to the frontrunners who treated us to some gripping racing under extremely difficult conditions,” says Oliver Schwab, Project Manager Porsche Mobil 1 Supercup.

Premiere at Zandvoort next weekend

Next weekend, the Porsche Mobil 1 Supercup will be held as part of the Dutch Grand Prix support programme from 3 to 5 September 2021. This event marks a premiere in the 28-year history of the Supercup, with the one-make cup racing for the first time in Zandvoort.

At round five of the international one-make cup, the reigning champion from the Netherlands planted his Porsche 911 GT3 Cup on pole position in pouring rain. The GP Elite driver’s gap to Dylan Pereira (BWT Lechner Racing) from Luxembourg was 0.568-seconds – an impressive margin by Supercup standards.

“With the green light for qualifying it began to pour – and the conditions became extremely difficult. I also bumped into a fellow competitor during my first flying lap. But I remained calm and managed to achieve another really good lap,” says a thrilled Larry ten Voorde, the current points leader. Dylan Pereira, for whom the Formula One circuit at Spa-Francorchamps is almost a home track, first had to familiarise himself with the new Porsche 911 GT3 Cup in the rain. “Sections of the racetrack such as Eau Rouge or Blanchimont are hugely challenging even in sunny conditions. The adrenaline rush is even greater in the rain,” says the Luxembourger.

Setting the third-fastest time, Frenchman Florian Latorre (CLRT) managed to beat the Martinet by Alméras driver Jaxon Evans from New Zealand, who currently ranks second in the overall standings. Behind Max van Splunteren (NL), the second driver of the Team GP Elite squad, his 16-year-old compatriot Morris Schuring turned the sixth quickest lap. The youngest competitor of the weekend receives coaching from Ten Voorde. Position seven was achieved by Ayhancan Güven. “My car was set up for a dry track,” admitted the Porsche Junior from Turkey, who competes for the BWT Lechner Racing squad. “To be honest, I didn’t expect such heavy rain.”

Rain is also predicted for Sunday’s race. In addition to the obvious – fitting grooved tyres – the teams also have to adapt other details of their Porsche 911 GT3 Cup racers to wet conditions. “We adjust the rear spoiler with a steeper angle of attack to create downforce at the rear axle and lend the rear wheels better traction,” describes pole-setter Ten Voorde. This effect requires an adjustment of the brake balance towards the rear axle. “What you definitely need to avoid is having the front wheels lock up under braking, because then the car will not turn in,” the reigning champion explains.

For additional grip, a softer set-up of the anti-roll bars is needed. “On a wet track, I also take the kerbs more aggressively to get a more direct racing line,” reveals Porsche Junior Güven. “So that the front splitter is not damaged, I raise the ride height of my car.” Another effective measure would be to select a rain setting for the shock absorbers. This, however, is excluded in the Porsche Mobil 1 Supercup to keep costs for the teams within reasonable limits. “That’s not a problem because we all compete with the same shock absorber settings anyway,” adds Güven.

Round five of the Porsche Mobil 1 Supercup, consisting of 11 laps on the Spa-Francorchamps Formula One track, starts on Sunday (29 August 2021) at 12:05 CEST. Live broadcasts will be available on Eurosport and Sky Sports, as well as f1tv.formula1.com. Fans can also follow the Porsche Mobil 1 Supercup at any time on Twitter (@PorscheSupercup / @PorscheRaces), Instagram (@PorscheSupercup) and Facebook (@PorscheSupercup). Full results and the overall championship standings can be found on the following link: https://motorsports.porsche.com/usa/en/article/2021/03/12/pmsc-2021-results

Michael Steiner, Member of the Executive Board for Research and Development at Porsche AG, comments: “One-make series with the Porsche 911 GT3 Cup have formed the basis of our customer sport for decades. In the current season, there are 29 series on a national level. In addition, there’s the international Porsche Mobil 1 Supercup at the pinnacle. It’s considered to be one of the toughest racing series where the driver counts above all else. There’s a good reason that the Supercup has proven itself to be an excellent training platform for the Porsche Junior Programme. Many Porsche works drivers, world endurance champions and Le Mans winners have emerged from this. With its 300th race, the Supercup cements its position as one of the longest-lasting one-make cups in the world.”

The very first race of the Porsche Supercup, as it was then known, was on April 25, 1993 and thrilled Formula One fans as part of the San Marino Grand Prix support programme. Germany’s Uwe Alzen crossed the finish line in first place at Imola. Since then, the 911 Cup has made guest appearances at 22 different tracks in 16 countries, covering around 1.4 million kilometres at racing pace. The record champion is Patrick Huisman – the Dutchman won the Supercup title four years in a row in 1997, 1998, 1999 and 2000.

The Grand Prix circuit at Spa-Francorchamps is one of the most popular venues on the Supercup calendar. The different generations of the Porsche 911 GT3 Cup have competed there 28 times. The racetrack, which is dubbed the ‘Ardennes rollercoaster’ for good reason, has played a special role in the 28-year history of the Supercup more than once. In 2001, a total of 50 of the cars competed against each other at a joint event with the Porsche Supercup and the Porsche Carrera Cup Deutschland. Back then, the Frenchman Stéphane Ortelli won ahead of Germany’s Marc Lieb, who later became a Porsche works driver and is now Team Leader Sports Communication at Porsche.

In 2015, Hollywood star Patrick Dempsey, of Grey’s Anatomy fame, made a guest appearance at Spa. The American was one of more than 200 drivers to compete in the various VIP racers, in which celebrities from show business as well as champions from Formula One, rallying and motorcycle racing got a taste of the Supercup action. In 2016, a young Dutchman in the Porsche Mobil 1 Supercup attracted attention for the first time on the tradition-steeped Belgian racetrack. Larry ten Voorde will next weekend compete as the reigning champion and current points’ leader.

“This unique combination of ambitious young drivers, experienced VIP guest drivers and enthusiastic ProAms has been one of the secrets to the Supercup’s success since 1993. We can also be proud of the fact that the best teams from the national Porsche Carrera Cups line up on the grid in the Supercup. In the current season, too, this mix ensures a high level of professionalism and exciting races, but at the same time creates an incomparably friendly atmosphere in the pits and in the paddock,” says Oliver Schwab, Project Manager Porsche Mobil 1 Supercup.