Sense’s artwork was transformed into vehicle livery on a new Porsche Taycan, before being photographed to create three unique digital works of art in the form of multimedia photographs. In collaboration with the German NFT collectibles start-up Fanzone.io, the Non-Fungible Tokens* (NFTs) will be auctioned starting from 7 December 2021 at 7:00pm AEDST via the online platform SuperRare.com, a digital art marketplace using Ethereum technology.

Forming part of the celebrations of 70 Years of Porsche in Australia, this collaboration represents the first digital artwork project based on the blockchain technology Ethereum for Porsche in Australia. The NFTs were minted in a carbon neutral way by offsetting them via the Porsche Impact program, and proceeds of the auction will be donated to the Australian Centre for Contemporary Art.

An integral part in transforming Sense’s artwork on the Taycan into the realm of NFTs is attributed to photographer Derek Swalwell. Swalwell’s name is synonymous with the photographic representation of the architectural landscape in Australia and beyond. The location chosen for the three multimedia photographs highlights the commonality with the Taycan in the environmentally conscious architecture.

As an extension of the artwork, the NFTs will be accompanied by sounds that connect to the colours and vibrancy of the Taycan. A piece of original music was composed by Gene Shill who Porsche Cars Australia had already partnered with successfully for the launch of the Taycan in Australia earlier in the year. Shill, who is synonymous with creating music from car engine sounds, crafted all harmonic and rhythmic textures of the music from a single Taycan power unit sound.

“The Taycan is Porsche’s first fully electric car and represents a new era in the company’s history,” said Daniel Schmollinger, Managing Director and CEO, Porsche Cars Australia. “It is also the most digitally advanced car Porsche has ever created and we wanted to celebrate this by pushing the boundaries of traditional artwork on cars, turning inspired artwork into a digital asset. The result is the reflection of natural and modern Australia, linking heritage with the future. “Porsche has been in Australia for 70 years and over the past seven decades we’ve had some outstanding projects and created some once in a lifetime experiences. This is one of them.”

Local neo-expressionist and social expressionist artist Nigel Sense’s pieces are popular amongst Porsche owners. “My work is maps and painted lines that lead to the unknown with symbols and imagery that I have corrected on the way,” said Sense. “It's the emotional feeling of movement going from one place to another, that excitement to see what’s over the horizon. The beauty of living a life well lived.” Selected exhibitions of the Taycan art car itself are also planned for the remainder of 2021.

Porsche Cars Australia is realising the project together with Fanzone. The company builder Forward31 – a business unit of Porsche Digital GmbH – founded the Berlin start-up in June 2021. The young company operates the online platform Fanzone.io on which fans can collect and exchange digital trading cards of different sports IP partners as NFTs and also profit from their increase in value. Fanzone uses blockchain technology to ensure the rarity and identity of the collector’s items is maintained.

Unveiled in 2019 and launched in Australia earlier this year, the Taycan is Porsche’s first all-electric sportscar. It is a unique combination of typical Porsche performance, connectivity, and all-around everyday practicality. Last year, the four-door sports sedan, with a total of twenty-seven innovations, was named the most important innovation driver on the global automotive market: at the World Car of the Year Awards 2020, the Taycan took top honours in the World Performance Car and World Luxury Car categories.

Employing various pop art techniques and the tactic of painting the things he knows, Sense considers his role as an artist and his work reflects an inclusive suburban upbringing and experience. Sense’s paintings are immediate and striking, engaging the viewer in an intimate way with his everyday world. Communicating through fun and humour, his paintings seek understanding and empathy. Nigel Sense is represented by Fox Galleries, Melbourne.

Derek Swalwell’s name is synonymous with the photographic representation of the architectural landscape in Australia and beyond. Having crossed the globe numerous times since starting out on his photographic journey over twenty years ago, Swalwell’s work documents some of the world’s most iconic built environments and visually articulates them in an entirely new light. A Porsche owner himself, Derek searched carefully for the perfect location that would make the idea really sing.

About the music composer

A renowned Australian record producer and musician, Gene Shill is a pioneer in lounge and deep house music creation and collaboration. He designs bespoke soundtracks for luxury brand profiles to create unique consumer experiences. As a Porsche enthusiast, Gene is inspired by the sounds of Porsche sportscars. He takes raw sounds and translates them into musical harmony and rhythm. The end result is dancefloor tunes inspired by, and made from, the sound of a Porsche.

FANZONE Media GmbH develops and operates a novel fan experience platform centered around limited digital collectibles and trading cards secured as non-fungible tokens (NFTs) on the blockchain. On fanzone.io, users can buy, collect, trade and use the digital trading cards of their favorite sports stars in different game variants. The platform has been initially launched in early June 2021 with the German football association (DFB) as launch partner. Founders Dirk Weyel, Claudio Weck and Björn Hesse bring decades of experience in games, sports marketing and blockchain technology to the table.

* A non-fungible token (NFT) is a unit of data stored on a digital ledger, called a blockchain, that certifies a digital asset to be unique and therefore not interchangeable. NFTs can be used to represent items such as photos, videos, audio, and other types of digital files. 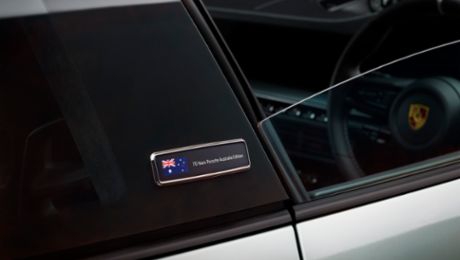 Porsche Cars Australia has held a gala event to mark 70 years for Porsche in Australia. 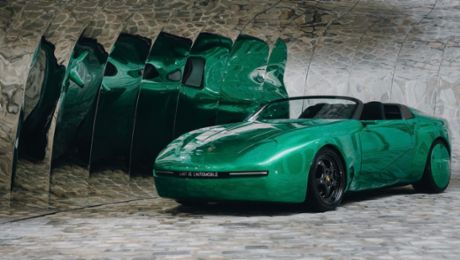 The greatest ever Porsche art cars and their designers

These are the ten most popular Porsche art cars created over the years by talented creatives.