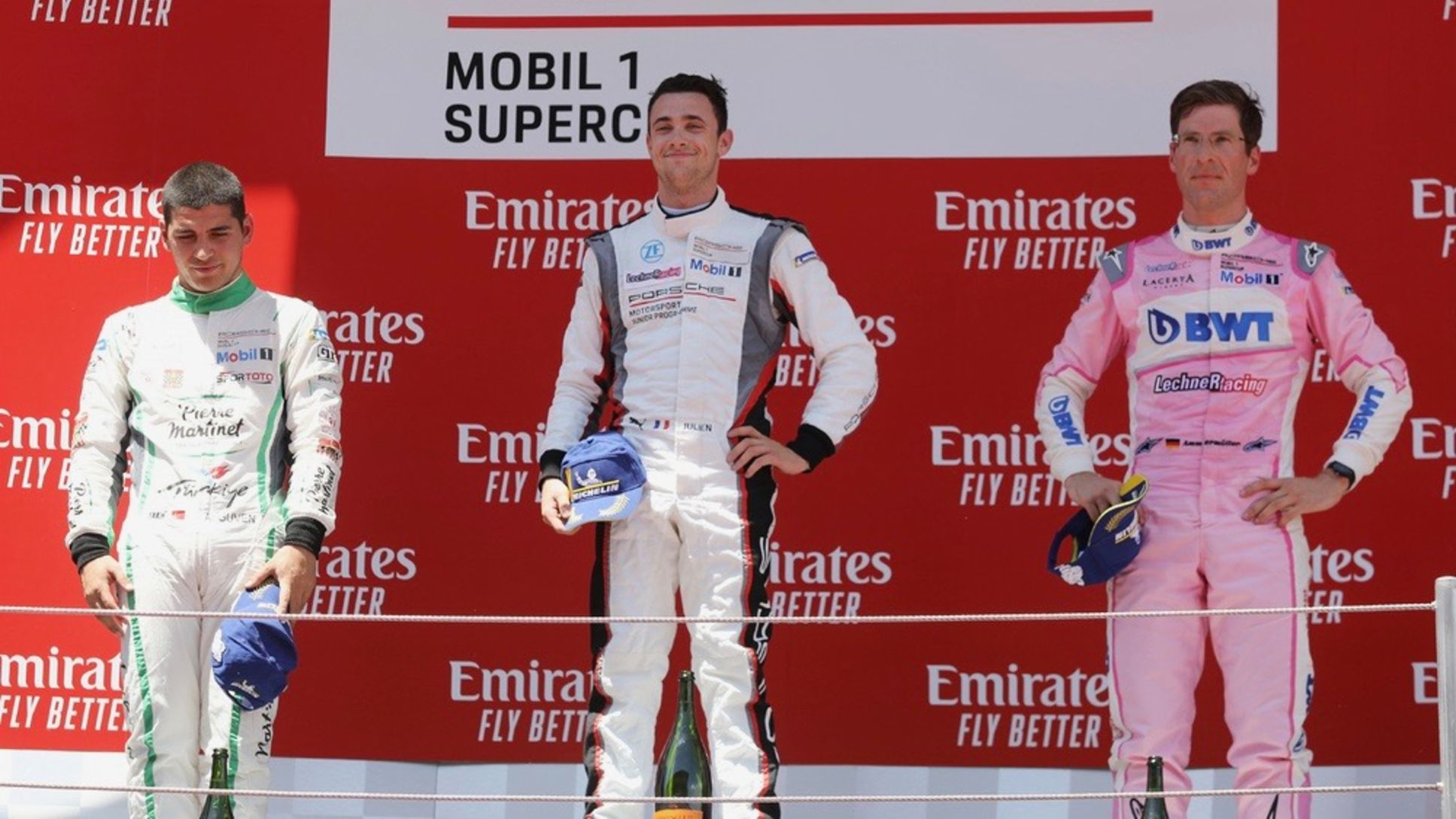 Perfect start to the season for Porsche Junior Andlauer

The first race weekend in the Porsche Mobil 1 Supercup could not have turned out better for Julien Andlauer: fastest in free practice, pole position and victory at round one of the season on the Spanish Circuit de Barcelona-Catalunya.

“That was a perfect weekend for me. I managed to assert myself in the critical phases of the race – which were in the first laps and at the restart after the safety car phase,” said the Porsche Junior (F/BWT Lechner Racing). At Sunday’s race, Ayhancan Güven (TR/martinet by ALMÉRAS) and Michael Ammermüller (D/BWT Lechner Racing) scored the other podium steps with their 485 hp Porsche 911 GT3 Cup racers.

Andlauer made the most of the restart

The 28-strong field from 17 nations treated spectators to an action-packed race on the circuit north of Barcelona. In sunny weather and a temperature of 21 degrees Celsius, Andlauer immediately took the inside line after the start in order to defend himself against Güven. The racing driver from Turkey made repeated attempts to overtake the Frenchman, but was thwarted in lap five when the safety car was deployed to enable a vehicle to be salvaged from the track. Andlauer made the most of the restart and used the remaining distance to pull clear of Güven. After 14 laps, the French racing driver swept over the finish line 3.2 seconds ahead of his pursuer from Istanbul. “I had a great duel with Julien Andlauer over the first laps. Unfortunately, I was no longer able to match his pace. Still, it felt terrific to climb the podium in front of so many people,” said Güven. The Alméras driver concluded his race as the best rookie.

Ammermüller held on to his third place over the entire distance

Andlauer’s teammate Ammermüller held on to his third place over the entire distance. On the 4.655-kilometre racetrack, the reigning Supercup champion defended his position against Mikkel Pedersen (DK/Dinamic Motorsport) over the first laps. In the final phase, Ammermüller even challenged Güven for second place. However, in the duel with the 21-year-old, he never succeeded in making the decisive move. “In the last laps I was sitting on Ayhancan Güven’s bumper. This racetrack has very few passages that are suitable for overtaking, and he was slightly faster than me in those places,” explained Ammermüller. Fourth position went to Tio Ellinas (CY/Momo Meg- atron Lechner Racing), who was rewarded for his patience after he passed Pedersen two laps before the chequered flag. Jaap van Lagen (NL/martinet by ALMÉRAS) also overtook the Dane to secure position five ahead of Pedersen.

On the storied circuit in Montmeló, Al Faisal Al Zubair (OM/Lechner Racing Middle East) crossed the finish line in seventh place. Porsche Junior Jaxon Evans (NZ/Fach Auto Tech) took up his first Supercup race from the tenth grid spot and gained two positions over the course of the race. “Eighth place at my debut is a decent result. But I know that more would have been possible. For this reason, my team and I will work hard. Racing in front of the Formula 1 grandstands was great fun,” said the 22- year-old.

Round two of the Porsche Mobil 1 Supercup season will be held in Monaco from 23 to 26 May. With its tight corners, the city circuit in Monte Carlo demands total concentration from drivers. At the event in the Principality, the international one-make cup uses the big-top circus tent in Chapiteau de Fontvieille as the paddock.

Julien Andlauer has made a perfect start into the Porsche Mobil 1 Supercup season on Saturday: During the qualifying session at the Spanish Circuit de Barcelona-Catalunya, the Porsche Junior claimed pole position in a time of 1:47.869 minutes. Lining up next to him on the first grid row is Ayhancan Güven (martinet by ALMÉRAS) from Turkey. Michael Ammermüller (D/BWT Lechner Racing) takes up the race from the P3. “Being the fastest in free practice and qualifying gives me a lot of confidence for Sunday’s race,” said Andlauer, “but still the race will be a big challenge, as underlined by the close times in the sessions.”

Under cloudy skies and in temperatures of 20 degrees Celsius, the 28-strong field took up the hunt for the best grid positions. Right from the outset, Andlauer underscored his claim to the pole position and topped the time sheets over the entire 30-minute session. After just six minutes, the young racer from Lyon, France, turned his best lap. Güven also used the 485 hp of his Porsche 911 GT3 Cup to post his fastest lap early on in the qualifying. The 21-year-old turned the second fastest Porsche-lap of the day on the racetrack north of Barcelona in a time of 1:48.034 minutes. “The first grid row at my Supercup debut is a cool starting position. It’s been hugely motivating to get the chance to be watched by Formula 1 spectators. I’d like to give the fans a great show on Sunday,” said Güven.

Title defender Ammermüller secured the third grid spot in a time of 1:48.151 minutes. Using the grip of fresh tyres, the Lechner driver set his fastest time on his second lap. “In the final phase, the track surface was a little dirty in the first sector. So it was important to set a good time early on. In the race I’d like to gain at least one position. It’ll be decisive for me to find the right balance between safety and risk,” declared Ammermüller. Sharing the second grid row with the German is Tio Ellinas (CY/Momo Megatron Lechner Racing).

The fifth fastest qualifying time was secured by Denmark’s Mikkel Pedersen (Dinamic Motorsport) ahead of Jaap van Lagen (martinet by ALMÉRAS) from the Netherlands. Starting positions seven and eight are occupied by Dylan Pereira (L/Momo Megatron Lechner Racing) and Al Faisal Al Zubair (OM/Lechner Racing Middle East). Behind them, Florian Latorre (F/Fach Auto Tech) starts from ninth place. In the first race of this season’s Porsche Mobil 1 Supercup, Jaxon Evans (NZ/Fach Auto Tech) rounds off the top ten. The fastest lap time on the 4.655 kilometre circuit for the Porsche Junior was 1:49.097 minutes. “It felt good to be among the top ten in this strong field. However, I didn’t manage to turn a perfect lap. I’ll look at why with my team in order to make up as many positions as possible in the race,” said Evans.

Round one of the Porsche Mobil 1 Supercup takes off on Sunday at 12:45 hrs local time. Fans can watch the race live on Eurosport. The TV station broadcasts the race in 60 countries. In addition, Sport1 televises the international one-make cup in Germany, as does Sky in Great Britain and Italy. Moreover, the official Formula 1 streaming service (F1 TV) shows the race live.

#PorscheMobil1Supercup - First pole position of the season goes to #Porsche Junior @JAndlauer. The youngster turned the fastest lap in a time of 1:47.869 minutes pic.twitter.com/0ixHcNKlaf

The Porsche Mobil 1 Supercup is heading into an exciting season, beginning this weekend (10-12 May) in Barcelona. This year, the international one-make cup calendar again includes ten championship races at nine venues. Like in previous years, all races are contested as support to the Formula One World Championship. The new season brings a substantial expansion in the media coverage of the one-make cup, which was launched in 1993. All ten rounds can be watched live on the Internet and also in full length on TV. “From this year, fans are able to follow the Supercup even better in the audio-visual media. There are some very strong drivers coming up through the ranks from the national one-make cup series. At several rounds, celebrities will enhance the championship at the wheel of our VIP vehicle,” says Oliver Schwab, the Manager of the Porsche Mobil 1 Supercup, outlining the novelties for 2019.

Open fight for the title

The series organisers continue the long tradition of running a VIP vehicle this coming season. At selected rounds, prominent guest drivers will take the wheel of the Porsche 911 GT3 Cup. At the Silverstone race, Chris Hoy will join the field. The Scotsman has won six Olympic gold medals in track cycling and in 2015 clinched the LMP3 class of the European Le Mans Series. Last season, three VIPs took on the Supercup challenge: Dakar Rally winner Matthias Walkner contested his home race in Spielberg, BBC’s Top Gear star Chris Harris competed at Silverstone, and Formula E driver Felix Rosenqvist stirred up the field at Spa-Francorchamps. The current IndyCar driver from Sweden netted an impressive tenth place in Belgium. The greatest success in a VIP-Porsche was achieved by ex-Formula 1 world champion Mika Häkkinen. The Finn won his 1993 guest starts in Monaco and Budapest.

The 2019 Porsche Mobil 1 Supercup season marks an important step in the still young motorsport career of Jaxon Evans (New Zealand). The 22-year-old has come from the Porsche Carrera Cup Australia as the new Porsche Junior to tackle his maiden season in the fast one-make cup on an international stage. 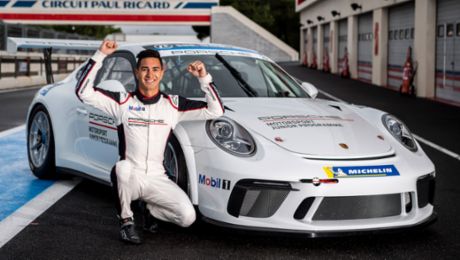 Porsche continues its successful sponsorship initiative for talented youngsters in 2019. 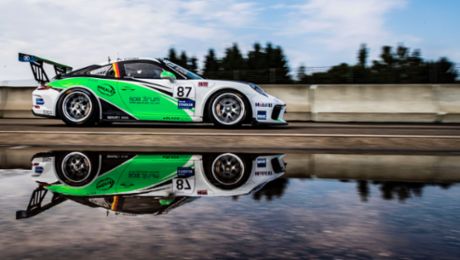