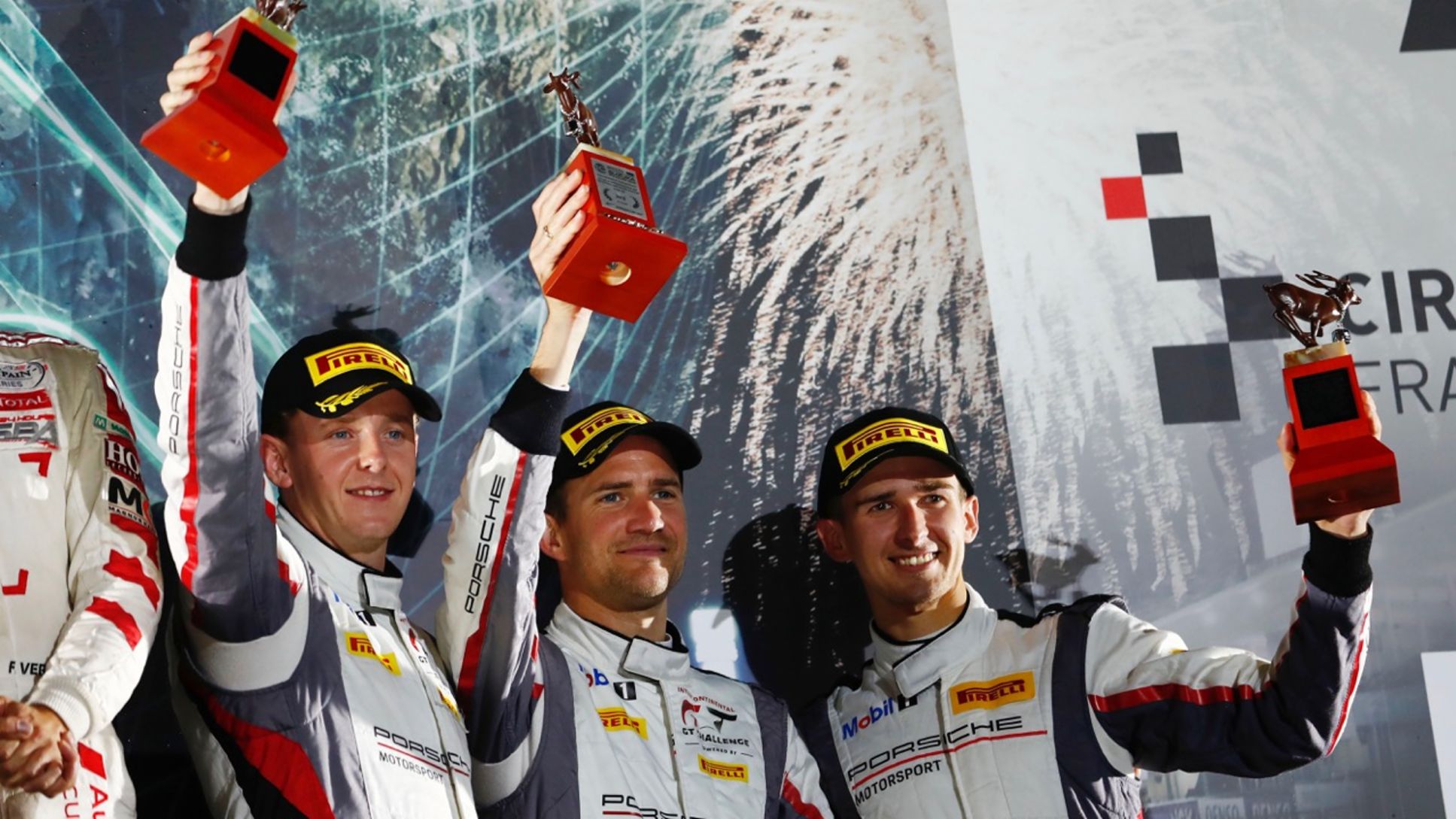 Intercontinental GT Challenge: Porsche has finished the ten-hour race at Suzuka on the podium. Dirk Werner, Matt Campbell and Dennis Olsen mounted a charge back up the order that ultimately netted them third place at the flag.

Putting in a flawless drive, the pilots of the number 912 car fielded by Absolute Racing were able to make up places thanks to the tactics of their team. Japan’s Team LM corsa celebrated a podium finish in the Pro-Am category.

The winning driver trio from the season-opener at Bathurst (Australia) took up the endurance race on the Japanese Formula 1 circuit from twelfth on the grid. In bright sunshine and temperatures of about 30 degrees Celsius, the crew made up several places in the opening stages of the race. Shortly before half distance, the 500+hp GT3 vehicle from Weissach joined the leading pack. Even a fluke collision with a lapped car couldn’t stop Werner, Campbell and Olsen on their battle back up the order. After ten hours of racing, the trio was just 3.430 seconds adrift of the second-placed car.

The two Frenchmen Romain Dumas and Mathieu Jaminet together with Sven Müller (Germany) made up even more places than their Porsche colleagues during the ten-hour race. The trio took up the race with their Earl Bamber Motorsport (EBM) Porsche 911 GT3 R from 24th on the grid. A faultless drive brought the car fielded by the Bathurst (Australia) winning squad to 13th place at the chequered flag. After losing a lap with a flat tyre in the first half of the race, a few incidents and only two caution phases offered limited tactical options for fighting back through the field.

The in the Pro-Am category

In the Pro-Am category the Team LM corsa finished on the podium after a strong effort. Japan’s Juichi Waisaka, Kei Nakanishi and Shigekazu Wakisaka finished third in class with the number 60 Porsche 911 GT3 R (24th overall). Andrew MacPherson, Ben Porter and Brad Shiels from Australia were hampered by bad luck. In the opening phase of the race, the Porsche 911 GT3 R (997) with starting number 51 slipped down the field after an accident and spent an hour of repairs in the pits to finish 31st overall.

Sebastian Golz (Project Manager 911 GT3 R): “In a true cliff-hanger final we battled for second place which we missed by a tiny margin. But third is still a good result. In all four races of this season we made it to the podium. This is strong testimony to the versatility and reliability of the Porsche 911 GT3 R. Today we collected important points for the championship and we will be back to fight in the final round at Kyalami.”

Dirk Werner (Porsche 911 GT3 R #912): “I am delighted with our podium finish at Suzuka. For us drivers, for Porsche and the Absolute Racing team this is a great result. We reaped the rewards for a strong showing in the race. In the last round of the season we’ll do everything to advance in the championship. It’s not going to be easy, but that’s what makes this fiercely contested championship so attractive.”

Dennis Olsen (Porsche 911 GT3 R #912): “We pulled out all stops, and third place is a great result. This was our best racing over ten hours with lots of duels and exhausting stints. Our 911 GT3 R ran like clockwork over the entire distance. This podium finish is the reward for a strong showing.”

Matt Campbell (Porsche 911 GT3 R #912): “We definitely didn’t have the fastest car, but thanks to good tactics and a faultless drive we made it up the order. Our car was very constant during the race, even under the difficult conditions and the heat, the tyres lasted well. From start to finish we didn’t have the slightest technical problem. In the last stint I tried very hard, but second place was just not possible.”

Romain Dumas (Porsche 911 GT3 R #911): “Unfortunately our qualifying didn’t go well, so we had to start from far down the grid. In the opening stages we fought back up the order to 10th place, but then a damaged tyre cost us dearly. We couldn’t do more today, but it’s great that one Porsche made it to the podium.”

Sven Müller (Porsche 911 GT3 R #911): “To make it up the order from 24th on the grid to 13th at the flag is good. Our chances were minimized through the disappointing qualifying. But over the ten hours the car got faster and faster. Overall this was one of the most difficult races of the year for me. Still, I had fun. It was great to be back in Japan, where I spent two great years of my career. The fans were very enthusiastic as always, and we had a few nice duels during the race.”

Mathieu Jaminet (Porsche 911 GT3 R #911): “This was a difficult ten hour race for us. But in the end we’ve got to say, we made no mistakes and got the most out of our possibilities. During the race we made up more than ten places, and this was all that was possible. Moreover, we had bad luck with the tyre damage. So we can live with this final result.”

The Porsche team Absolute Racing will take up round four of the Intercontinental GT Challenge from eleventh on the grid. In the pole shootout on the Formula 1 circuit at Suzuka (Japan), works driver Dirk Werner (Germany) turned the fastest Porsche lap so far this weekend in a time of 2:01.306 minutes. The German shares the No. 912 Porsche 911 GT3 R with Porsche Young Professionals Matt Campbell (Australia) and Dennis Olsen (Norway). The trio won the season-opening round at Bathurst (Australia) and currently rank third in the drivers’ classification. The identical vehicle fielded by Earl Bamber Motorsport (EBM) with the starting number 911 qualified on 24th.

Werner was the only Porsche driver who was eligible to take part in the final qualifying session with the 20 fastest cars. Prior to this, his teammates Olsen and Campbell had joined forces with the German works driver to lay the foundation for the pole shootout with fast lap times in the three qualifying sessions. Bad luck plagued the winning team of the season-opener at Bathurst (Australia), Earl Bamber Motorsport. Factory driver Romain Dumas from France was stopped by a red flag while attempting his flying lap in the first qualifying session. Afterwards, the worn tyres of his Porsche 911 GT3 R prevented the Frenchman from attempting another fast lap. His compatriot Mathieu Jaminet and Porsche works driver Sven Müller (Germany) were unable to make any significant headway in the remaining sessions. The No. 911 car now faces a ten-hour pursuit from P24 on the grid.

In the Pro-Am category, the No. 60 vehicle of the customer team LM corsa, with Japanese drivers Juichi Wakisaka, Kei Nakanishi and Shigekazu Wakisaka, takes up the ten-hour race from the 27th overall spot as the best car of its class. The Porsche 911 GT 3 R (model 997) run by the AMAC Motorsport squad, which is entered in the silver class, achieved fourth in its category (34th overall). Sharing driving duties in the No. 51 vehicle are the Australians Andrew MacPherson, Ben Porter and Brad Shiels.

Sebastian Golz (Project Manager 911 GT3 R): “Only one car in the pole shootout, and the best vehicle on eleventh – this is not what we expected. We need to look at the data to see the reasons for this. I’m confident that both Porsche 911 GT3 R will be competitive in the race. Our strength is our consistent pace over long distances. So I see good chances for our cars to make up ground over the ten hours of the race and join the frontrunners.”

Dirk Werner (Porsche 911 GT3 R #912): “It was a great experience to get the chance to contest the pole shootout on the legendary Suzuka racetrack. My lap was good, but I braked a little too late before the chicane. Perhaps we could have qualified one or two spots further up the grid. We only had one practice session in dry conditions before the qualifying and I didn’t get to turn a single lap. In view of this, I’m really pleased. The car was good to drive and, with this setup, we’re also well prepared for the race.”

Mathieu Jaminet (Porsche 911 GT3 R #911): “It was a difficult day for us. Unfortunately, we missed out on a place among the top 20 cars in qualifying. And that meant we weren’t eligible to take part in the pole shootout. We have to analyse why our car didn’t run optimally. The team is doing everything possible to make significant improvements to the car in time for the race. We want to launch a major pursuit.”

After the successful season-opener at Bathurst, Australia, and the one-two victory at the world’s most important GT3 race in Spa, Belgium, Porsche is again aiming for a top result at the ten-hour race in Suzuka (Japan).The two Porsche teams, Earl Bamber Motorsport and Absolute Racing, each field a Porsche 911 GT3 R in the Pro category. Three Porsche works drivers and three Porsche Young Professionals will share driving duties in the two vehicles on 25 August. Thirty-six vehicles are entered for round four of the Intercontinental GT Challenge on the 5.807-kilometre Suzuka Circuit.

The ten-hour race in Japan marks the fourth of five rounds of the 2019 Intercontinental GT Challenge. The Suzuka Circuit, with its many twists and turns, including slow, semi-fast and flat-out corners, has a reputation as one of the world’s most demanding racetracks for drivers. Moreover, it is one of the very few tracks to feature a figure-eight layout with an overpass.

#IntGTC We have four regional customer teams and six #Porsche drivers heading to the #Suzuka10H this weekend.

The Porsche 911 GT3 R was newly developed for the 2019 season. Improvements in the areas of aerodynamics, kinematics, efficiency and driveability were systematically implemented from the insights garnered from the many race outings of its predecessor. The six-cylinder engine in the rear of the GT3 customer racer produces over 368 kW (500 hp). The successful predecessor has notched up victories in numerous international racing series, for example in the IMSA SportsCar Championship, the World Challenge, the ADAC GT Masters, at the Nürburgring 24-hour race and the Bathurst 12 Hour.

This is the Intercontinental GT Challenge

The 2019 Intercontinental GT Challenge calendar is made up of five endurance races on five continents. While the teams were only permitted to field 2018-spec GT3 cars at the season-opening round in Bathurst (Australia), the latest spec is sanctioned for the Laguna Seca (USA), Spa-Francorchamps (Belgium), Suzuka (Japan) races and the season finale in Kyalami (South Africa). Porsche will not compete with a factory squad, but instead supports various customer teams in their campaign. 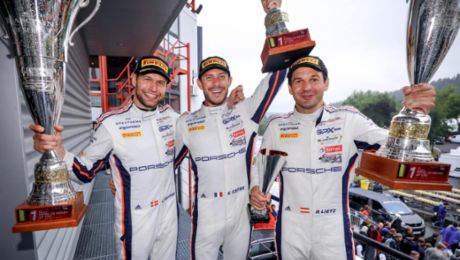 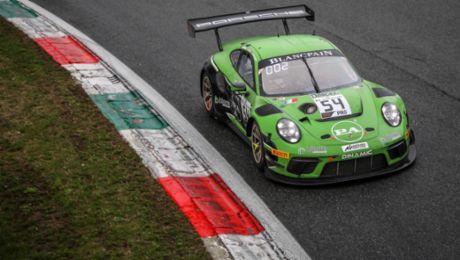 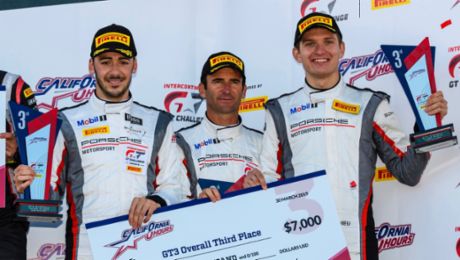 The new Porsche 911 GT3 R scored a place on the podium at its first outing in the Intercontinental GT Challenge.