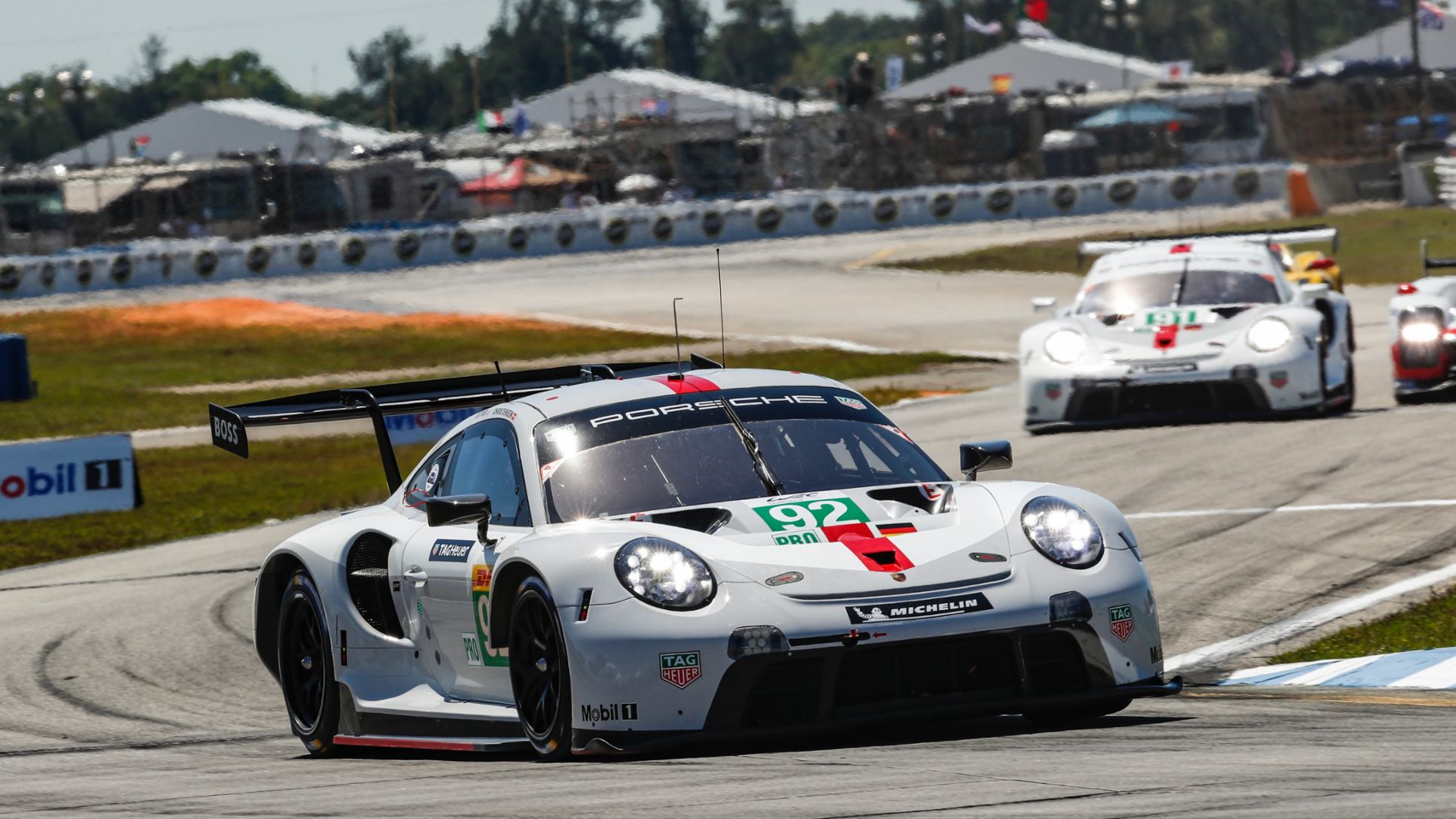 The endurance classic on the 13.626-kilometre Circuit des 24 Heures in the west of France will be contested for the 90th time and represents round three of the FIA World Endurance Championship WEC. The Porsche GT Team will field two ca. 378 kW (515 PS) 911s. In the GTE-Am class, five customer squads campaign a total of eight 911 RSR. After careful preparation as part of the Porsche Racing Experience and two years in the European Le Mans Series (ELMS), Hollywood star Michael Fassbender celebrates his Le Mans debut in the No. 93 entry. He has documented his personal “Road to Le Mans” journey in his own YouTube series: www.porsche.com/RoadToLeMans. With 19 outright victories and 108 class wins, Porsche is by far the most successful manufacturer in the world’s most important sports car race.

“We’re tackling the 24 Hours of Le Mans well prepared, with huge determination and as the leaders of the WEC rankings,” says Thomas Laudenbach, Vice President Porsche Motorsport. “This is the last time the works team will contest the tradition-steeped classic with the two 911 RSR. We still have a score to settle there: Since the debut in 2019, our cars have won on almost all racetracks on the FIA WEC calendar – only the GTE-Pro class win at Le Mans is missing from our list of successes. We want to change this. There’s no doubt that our RSR, the six works drivers and the team are capable of this. And our customer squads certainly have good chances to succeed in the 23-strong GT3-Am class field.”

Since its first race outing in the FIA WEC, the 2019-generation Porsche 911 RSR has notched up seven class wins from 16 races. The cars from Weissach have set pole position 14 times in the GTE-Pro category. In 2018, the predecessor model achieved a sensational one-two result at Le Mans.

“We’ve seen how strong our cars are at the previous FIA WEC races. We’ve learned a lot at Le Mans over the last two years. Now we want to implement these findings and bring home the long-awaited class win,” explains Alexander Stehlig, Director Factory Motorsport FIA WEC. “At the tests in Aragon, we prepared well for the highlight of the year. Plus, we have very experienced trios in our two works cars. They’re very familiar with the quirks of this special racetrack and the challenges of the endurance classic. Still, the pre-test in the week prior to the race is hugely important again this year: During these tests, we’ll confirm the direction that we’ve taken in our preparations. There’s one thing I’m particularly looking forward to: The fans are back and the great events like the public vehicle inspections and drivers’ parade are on the programme again. It’ll be a wonderful celebration for spectators, teams and drivers.”

The event on the 13.626-kilometre Circuit des 24 Heures at Le Mans is extremely popular with motor racing fans and marks the highlight of the FIA World Endurance Championship. The storied circuit south of the city with its 150,000 inhabitants consists mainly of public roads. Normally, hundreds of trucks and cars drive over the legendary Mulsanne straight every day on their way from Le Mans to Tours. Treacherous ruts present special challenges, especially in the rain.

After extensive restrictions due to the coronavirus pandemic, the 90th edition of the Le Mans 24- hour race will be contested in front of a large crowd. Up to 250,000 fans are expected at the Sarthe on the second weekend in June. For the first time since 2019, spectators will once again be treated to special events such the public technical scrutineering, the drivers’ parade and the pit-lane tour with concerts and other highlights. Sunday 5 June is reserved for the so-called pre-tests on the Circuit des 24 Heures – the only chance for teams and drivers to familiarise themselves with the special characteristics of the circuit before the race week kicks off.

Austrian Richard Lietz and Gianmaria Bruni from Italy share the No. 91 Porsche and, like last year, will receive support from Frenchman Frédéric Makowiecki. The No. 92 sister car is crewed by the GTE-Pro World Championship leaders Kévin Estre (France) and Michael Christensen (Denmark) as well as Belgium’s Laurens Vanthoor. At the 2018 Le Mans race, the trio clinched a class victory with the 911 decked out in the historic “Pink Pig” livery. Ahead of the most important and longest race of the year, Porsche currently leads the manufacturers’ classification.

The German customer squad Dempsey-Proton Racing fields a pair of Porsche 911 RSR vehicles. The outfit based in Baden-Württemberg will run two identical vehicles entered under the names WeatherTech Racing and Proton Competition. At his Le Mans debut, Hollywood star Michael Fassbender shares the car with works driver Matt Campbell from Australia and the reigning IMSA GTD champion from Canada Zacharie Robichon, who also tackles the endurance classic for the first time. The Project 1 customer team campaigns two 911, with Hardpoint and GR Racing each bringing one RSR to the highlight of the year.

Overview of teams and drivers

Richard Lietz (Porsche 911 RSR #91): “The biggest race of the year is finally here once again. It’ll be the last factory outing for the Porsche 911 RSR at Le Mans. I very much hope that, unlike in the past two years, we’ll have close competition that gives us realistic chances of winning. Unfortunately, we’re not alone in that hope. One thing is always guaranteed in this race – it’s never easy. But of course, we’re more than willing to accept this challenge.”

Gianmaria Bruni (Porsche 911 RSR #91): “After the disappointments of the past two years, we finally want to get back to the top. We have everything it takes to make that happen. Motivation is at an all-time high because everyone wants to crown the final outing of our factory RSR in Le Mans with a class win. I’m looking forward to driving the first laps, but I’m just as excited for the huge crowds that are expected. The event thrives on big spectator numbers. The return to normality after the peak of the coronavirus pandemic is good for everyone: fans, drivers, teams, manufacturers and last but certainly not least, the sport as a whole.”

Frédéric Makowiecki (Porsche 911 RSR #91): “Absolutely every racing driver associates a home race with a range of emotions – that is especially true for a Frenchman at Le Mans. Friends and family are there, so there’s a lot of support. This gives us an enormous boost and a lot of motivation. At the 24-hour classic, the atmosphere continues to build as the race week progresses. The tension and anticipation can be felt everywhere just before the start. It all comes to a culmination when we cross the finish line on Sunday. I really want to win my home race and I’ll keep trying until it finally happens.”

Kévin Estre (Porsche 911 RSR #92): “Le Mans is always the biggest race of the season. In the past two years, we haven’t achieved the results that do our 911 RSR justice. We are highly motivated to change this at the car’s final Le Mans start in the GTE-pro class. The first two races of this year’s FIA WEC season went well for us: we’re leading the championship. We’re bringing everything we have to the table to achieve a class victory. But at Le Mans, you always have to be prepared for anything, because the track has its own special characteristics.”

Michael Christensen (Porsche 911 RSR #92): “The track has a unique character. Top speed on the long straights is crucial for overall performance. There are five such passages at Le Mans. On the famous Mulsanne straight, we drivers put our foot to the floor for a very long time, only to brake at the very last moment for the chicanes and the Mulsanne corner – these situations determine whether the lap time is good or bad. However, for us drivers, the Porsche corners are more challenging and exciting: It’s great fun driving through them in the 911 RSR every year.”

Laurens Vanthoor (Porsche 911 RSR #92): “For me, Le Mans is the most important race of the year. It’s terrific to be a part of the No. 92 crew again. I get along very well with Kevin and Michael; we won the class together in 2018. I’ve also known our engineers for a very long time. We make a great team. I have a good feeling about this race. We will definitely have a chance to be up the front but there is still a long way to go with a lot of work ahead of us. I’m ready and I’m really looking forward to it.” 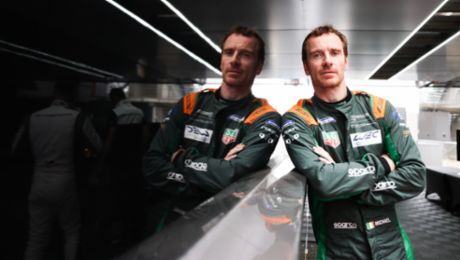 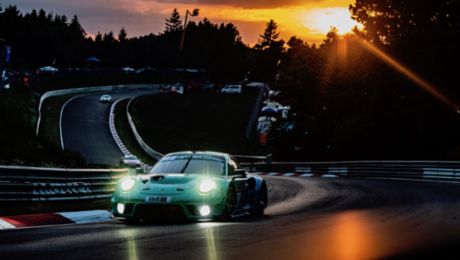 The Porsche 911 GT3 R fielded by the customer team Falken Motorsports has concluded the 24-hour race at the Nürburgring in the top 10.