Porsche has marked the four days of the 2022 Formula 1® Australian Grand Prix with an array of memorable events, including the first Australian race of the new 992-generation 911 GT3 Cup in the Porsche Paynter Dixon Carrera Cup Australia Championship.

The invitation-only event sees Porsche women come together for the annual woman with drive luncheon, which celebrated its 10th anniversay this year - in style.

The success of this pioneering annual event has enjoyed ever-growing popularity thanks in part to being widely copied since its inception, further underlining its pivotal role in celebrating women and their achievements ahead of the annual Australian round of the Formula 1® world championship.

This year's event was all about networking, getting together and celebrating women in business and women who love their cars.

To celebrate ten years of woman with drive, the CEO and Managing Director of Porsche Cars Australia announced a special content series focusing on the women behind the brand.

"Having such an uplifting group of people share their journeys was inspiring and enjoyable," said Daniel Schmollinger.

"It's a delight to access their insights and knowledge and a privilege to provide this important annual forum."

Kick-starting Friday was the opening of the Porsche Pavilion, the brand’s premier track-side hospitality facility at the Albert Park Circuit.

Located at the fast turn two left-hander, the Porsche Pavilion offered guests spectacular views of the on-track action with its outdoor balcony and elevated grandstand seating, making it one of the circuit’s best vantage points.

The track-side super screen situated opposite made it easy for guests to follow the racing action and the all-day five-star grazing and refreshments menu added to its status as one of the most popular places at the Albert Park Circuit.

Among the guests were many of Porsche’s racing heroes, including Formula 1 race-winner, former Le Mans 24-hour winner and Porsche brand ambassador Mark Webber. Joining him were and Tones and I, Khanh Ong and Toby Price, among others.

“Having so many of our owners and retail partners join us at the Porsche Pavilion was a real joy,” said Daniel Schmollinger, CEO of Porsche Cars Australia.

“Sharing such an exciting weekend together was yet another embodiment of the Porsche family.”

The Porsche in Motion experiential roadshow is once again touring Australia, taking Porsche’s fascinating story to a range of venues across the country.

This year’s Australian Formula 1® Grand Prix was the latest setting to host this popular mobile event, which lets visitors get up close to the Porsche brand to discover its heritage, from inception to today.

The captivating exhibition focuses on Porsche’s design, technologies and performance and showcases a selection of exclusive models from the sportscar maker's range.

Porsche in Motion was a popular hit with the public at this year’s Australian Formula 1® Grand Prix, continually busy with delighted visitors from Thursday through Sunday.

A record 31 new cars, each of them presented to local teams at their full technical handover in January this year, made their first competitive outing at the weekend and dazzled crowds with their door-to-door racing and sheer speed.

“The step-up in performance with this new 911 GT3 Cup is significant,” said Barry Hay, Motorsport Manager at Porsche Cars Australia.

“This year’s Porsche Paynter Dixon Carrera Cup Australia is the largest and most competitive in local Carrera Cup history and this weekend’s racing action points to what’s sure to be its hottest year.”

The Porsche 911 Cup is the world’s best-selling racing car and it recently celebrated its 30th anniversary, which was marked with the unveiling of this all-new model in 2020.

Adding extra adrenaline to this year’s Australian Formula 1® Grand Prix was the Porsche High Flier Grand Prix Experience, an exclusive circuit-driving event for guests at one of the world’s most spectacular race tracks, the Phillip Island Grand Prix Circuit.

Conducted on Friday and Saturday, around 50 guests flew to the famous island circuit by private helicopter, which departed from the edge of Melbourne’s Yarra River in a stunning morning flight eclipsed only by the high-speed Porsche Track Experience that followed on arrival.

Porsche’s certified track instructors guided guests as they experienced the advanced driving dynamics of these four sportscar models, with exciting high-speed driving sessions and ‘taxi ride’ sessions before the return flight to Melbourne, which landed at the Porsche Pavilion at the Albert Park Circuit.

“This was an epic day!” said Toby Price. “I'm still stoked and smiling.”

The comparison's staggered start saw these high performance machines enjoy some close finishes on the Albert Park circuit, with Carrera Cup's Luke Youlden steering the Taycan to victory on three out of the four comparisons throughout the weekend.

Special guests who got to ride in the passenger seat next to Youlden were ecstatic about the experience. Amongst them were chef Khahn Ong, singer Tones and I and Artistic Director of the Australian Ballett, David Hallberg.

With even sportier lines and available exclusively as a four-seater Coupé, the Cayenne Turbo GT comes with all available chassis systems fitted as standard  along with performance tyres developed specially for this model.

The powertrain and chassis also have a unique set-up specifically tuned for the Cayenne Turbo GT.

The result is a harmonious overall concept with superb racetrack capability.

As one of Australia’s leading fashion designers, Bianca Spender returns to Australian Fashion Week with a new womenswear collection that revels in her commitment to sustainable fashion practice. 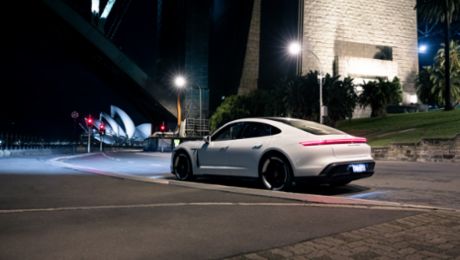