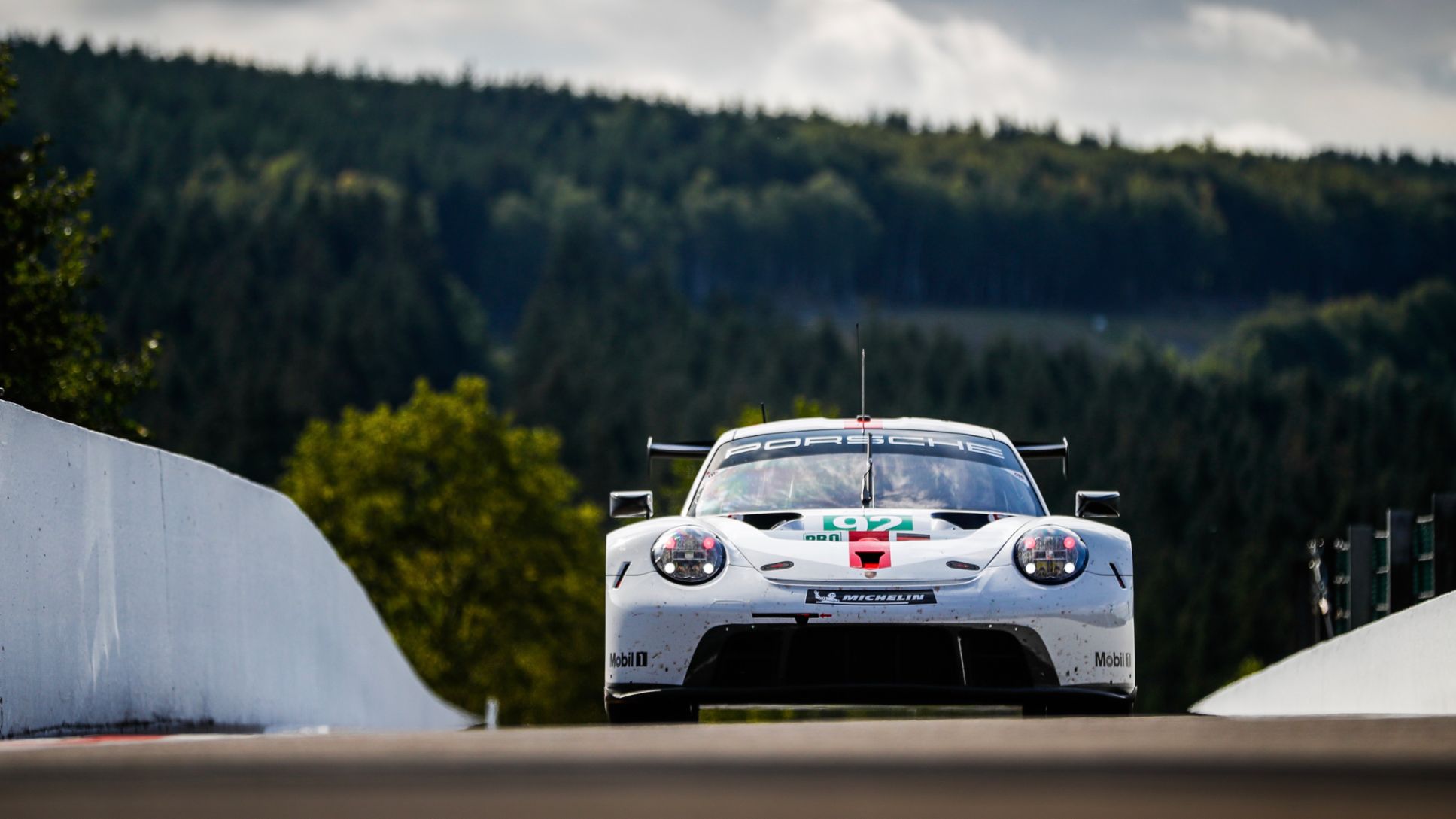 The Porsche works team sends two 911 RSR to tackle the opening round of the FIA World Endurance Championship WEC at Spa-Francorchamps on 1 May. The successful team of the Stuttgart sports car manufacturer faces unique conditions in Belgium’s Ardennes region.

No other racetrack apart from Le Mans is as long (7.004 kilometres), as undulating (with an elevation change of 100 metres), and as diverse in its challenging mix of high-speed passages and spectacular corners with extreme lateral acceleration.

“Every year we face the same question concerning the special features of the racetrack: high or low downforce? In terms of lap times, it actually doesn’t make a difference,” describes Alexander Stehlig, Head of Operations WEC. The Porsche RSR, which contests the GTE-Pro category of the FIA WEC, offers several means to adjust the amount of downforce. The rear wing stands more or less in the airflow, and by adjusting the ground clearance at the front and rear, the vehicle’s so-called rake is trimmed. “In contrast to the LMP1 prototype vehicles of the past few years, we don’t have a special aero kit for Le Mans in the GTE-Pro class to reduce drag,” says Stehlig.

In previous years, the LMP teams often used the WEC race in Belgium as a test run for the 24 Hours of Le Mans. Is the aerodynamic configuration suitable for the upcoming season highlight in France? Do the data from the simulation and wind tunnel correlate to the real findings on the track? Such questions are not relevant in the GT department. “At Spa-Francorchamps, we always opt for a lot of downforce, even if the long straights make a low-drag configuration seem appealing. This allows us to be faster in sections of the racetrack such as Pouhon, while in other places we lose a bit of time. It balances out in the end,” says Stehlig. A setup for high downforce also makes it easier for the drivers in fast corners, on crests and in dips. And the Michelin tyres are used optimally.

Those who want to make a phone call in a mountain village...

One 7.004-kilometre lap of Spa-Francorchamps means an elevation change of about 100 metres. The racetrack is nestled into the hilly countryside of the Ardennes. Cutting-edge technologies are used to maintain radio contact with the driver and keep the ongoing flow of telemetry stable at all times. The two-way radio communication between the gantry and the cockpit is ensured by digital radios supplied by the British provider MRTC.

The broad bandwidth of the digital communication technology ensures that an exclusive channel is available for each vehicle and the race control officials. The technology that is installed in the Porsche 911 RSR weighs just a few hundred grams and is mounted where the passenger seat is in the road car. The drivers wear earplugs with integrated headphones, and a microphone is built into the helmet. The team members at the mission control area and in the pits usually communicate with their full-speed heroes in the cockpit via sturdy headsets.

When it comes to exchanging data between the vehicle and the pits, Porsche relies on extensive mobile phone technology. “The car is installed with a transmitter module with three SIM cards,” explains Stehlig. “The system checks at high frequency whether 3G, 4G, or soon even 5G data connection is the strongest. It then determines independently over which provider the telemetry data are sent.“ The data packages, which are essential for monitoring the operating status of the Porsche 911 RSR, go on a long journey with a transmission speed of 115,000 baud. For example, from the La Source hairpin near the village of Francorchamps via satellite to Great Britain or Australia to the data centre of the mobile communications provider Vodafone, and back through orbit to the pit gantry on the Belgian circuit.

The data covers tens of thousands of kilometres in order to maintain contact of sometimes just a few metres between the racetrack and the command post at the pit wall. “Although the data travel long distances, all values are available within milliseconds,” smiles Stehlig. “That’s extremely impressive and it works with remarkable stability.” Porsche Motorsport is even prepared for network failures.

“For emergencies, there’s a backup solution, for instance in case the data connections via the three strongest local mobile networks don’t work due to possible overloading,” explains Torsten Eichler, Porsche 911 RSR system engineer for the FIA WEC. “We have a receiver module at the pits for such situations. If the data can’t be sent in the normal way, the cars send parcels directly to our on-site server should it be necessary.” The connections between the technicians’ laptops and the data server are secured, among other means, via a VPN tunnel – unauthorised access is not possible.

The data packets, which are sent from the 911 RSR to the computer systems at the control centre during practice or the race, are usually only a few megabytes. The scan rates of the sensors for the immediate transmission of the values are reduced, but the most important data such as tyre pressure, oil temperature, brake and accelerator pedal position and steering wheel angle are always available. “It’s enough to ensure the safe operation of the cars at all times and to make the most important tactical decisions,” explains Stehlig. “It’s not enough for a really precise analysis of the setup or the drivers’ different racing lines. We only get the necessary data if we read it from the laptop at the vehicle during or after a session. We’re talking about ten megabytes of data per driven lap,” says the experienced engineer. He adds with a smile: “Up to this point, the driver is spared from our tips on which areas he could possibly improve. But that then changes...” 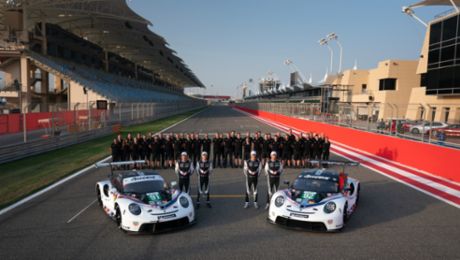 After notching up 18 race wins, five world champion titles and three class victories at the 24 Hours of Le Mans, Porsche has wrapped up its factory involvement with the 911 RSR in the FIA World Endurance Championship WEC. Under the banner of Porsche Penske Motorsport, Porsche returns to the world’s greatest endurance races with the 963 to fight for overall victories from the 2023 season. 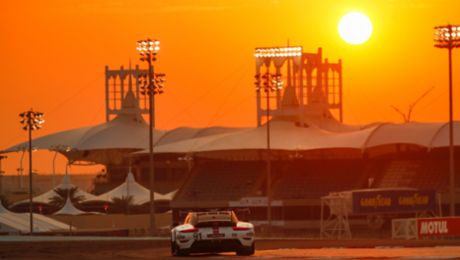 The Porsche GT Team bids the FIA World Endurance Championship WEC farewell with third and fourth place in the GTE-Pro class. After a spirited fight at the season finale in Bahrain, the factory squad narrowly misses out on winning the manufacturer’s and driver’s world championship titles. 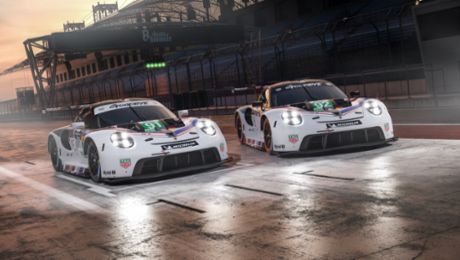 The two 911 RSR fielded by the Porsche GT Team will bid farewell to the GTE-Pro class of the FIA World Endurance Championship WEC sporting a very special livery. 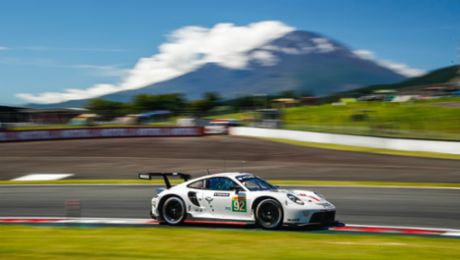