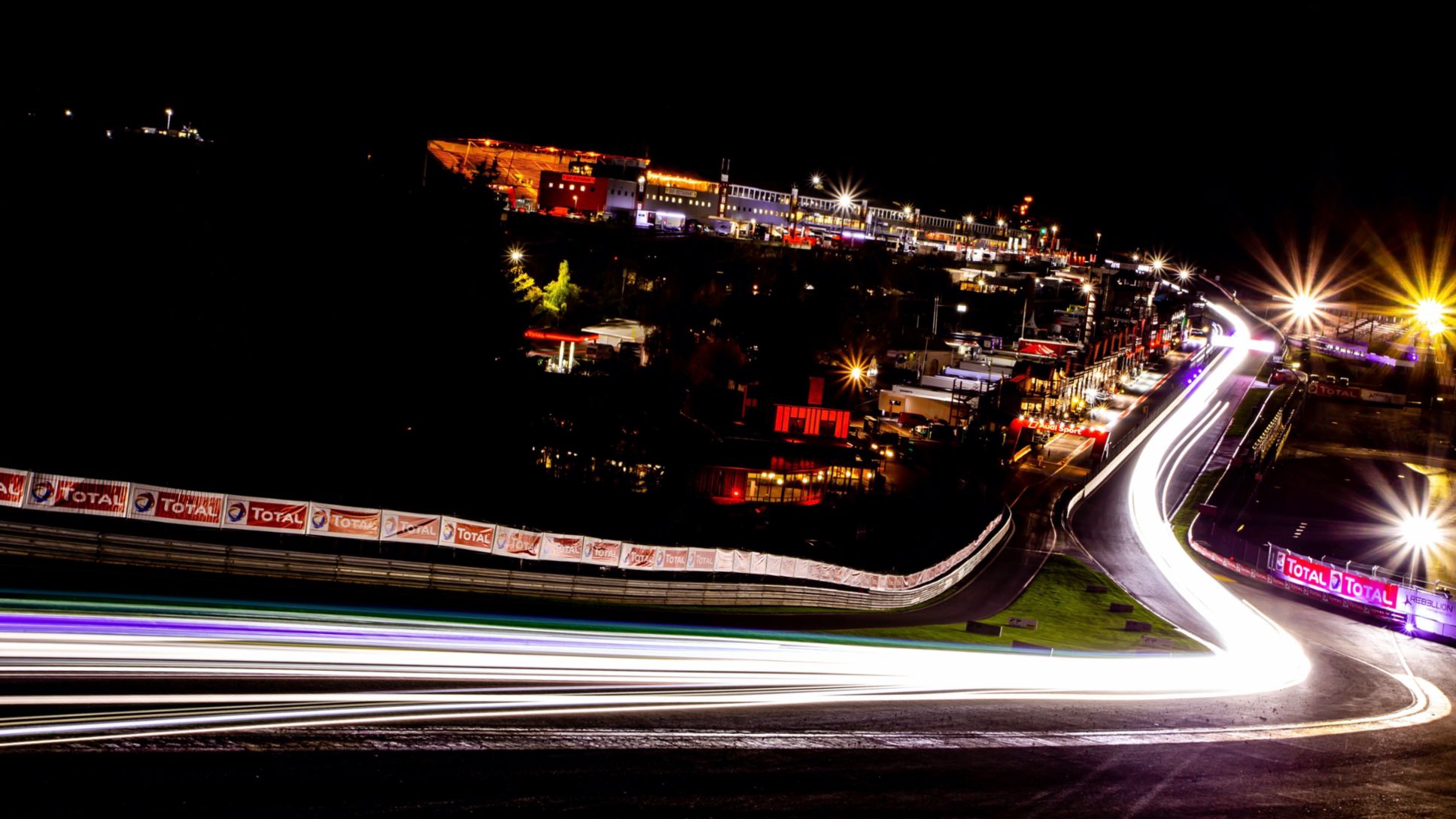 With 10 customer teams, 12 911 GT3 R racers and a total of 40 drivers – seven of whom are from the works team – Porsche is represented by an impressive line-up at the Spa-Francorchamps 24-hour race.

Hardly any other manufacturer will have more racing cars on the grid of the endurance classic this coming weekend. The legendary event on the 7.004-kilometre ‘Ardennes rollercoaster’ is considered one of the most important GT3 events in the world and counts towards two of this season’s championships: the GT World Challenge Europe Endurance Cup and the Intercontinental GT Challenge (IGTC). Porsche is aiming for a hat trick on the Belgian Grand Prix circuit. In 2019, works drivers Michael Christensen (Denmark), Kévin Estre (France) and Richard Lietz (Austria) claimed outright victory in the 911 GT3 R fielded by GPX Racing. Last year, another factory driver trio, Nick Tandy (Great Britain), Earl Bamber (New Zealand) and Laurens Vanthoor (Belgium), won the highlight of the GT3 season, that time with the Rowe Racing squad.

It is a century-old motor racing tradition. The Circuit de Spa-Francorchamps has been one of the greatest challenges for drivers from all around the world since 1921. As early as 1924 – just three years after the opening – the first 24-hour race was held in the eastern-most corner of Belgium not far from the German border. At that time, the racetrack measured 14.863 km and ran between the towns of Malmedy, Francorchamps and Stavelot. In 1979, a shorter version was introduced. At 7.004 km and with 21 corners, the storied Grand Prix circuit is still the longest on the Formula One calendar. Thanks to the spectacularly steep section Raidillon/Eau Rouge and the downhill passage with the infamous Blanchimont left-hander, the circuit continues to live up to its reputation as the ‘Ardennes rollercoaster’. The tight La Source hairpin at the end of the start-finish straight is one of the slowest corners of the GT3 season.

#Spa24h - Last year, @VanthoorLaurens, @earlbamber and @NickTandyR won the @24HoursofSpa. The trio crossed the finish line first after 527 laps on the 7.004-kilometre @circuitspa in Belgium and secured the second straight overall victory for the 500+hp #Porsche #911GT3R pic.twitter.com/nEhSsua8Gm

In the long and illustrious history of this endurance classic, Porsche has so far notched up eight overall victories – the last two in succession. For the Spa-Francorchamps event, drivers and vehicles can earn points towards the IGTC and the GT World Challenge Europe Endurance Cup after six, 12 and 24 hours. Due to the Covid-19 pandemic, only a limited number of spectators are allowed to attend the 24-hour race.

An overview of the Porsche teams and drivers

The 12 911 GT3 R cars fielded by Porsche’s customer teams will tackle the Spa-Francorchamps 24-hour race in four different classes. Seven 911 racing cars each helmed by three drivers will fight for overall victory in the 25-strong Pro division. Dinamic Motorsport and KCMG each campaign two of the Weissach-developed rear-wheel drive vehicles. The 2019 Spa winner GPX Racing fields one car. For the first time, Rutronik Racing runs a 911 GT3 R with another Porsche entered by Schnabl Engineering. The team known from the Nürburgring-Nordschleife decided at short notice to contest its debut race at the endurance classic. The vehicles fielded by GPX and Schnabl Engineering, the No. 47 car from KCMG and Dinamic No. 54 entry as well as the Porsche of Huber Motorsport and Herberth Motorsport from the Am and Pro-Am classes can also earn points for the manufacturer’s classification of the IGTC.

In the Silver Cup, Allied Racing flies the flag for the sports car manufacturer. In this class, four drivers are permitted per racing car and their FIA status must be no more than ‘silver’. Simply put, this class is reserved for semi-professionals. With 17 entries expected, this class is the second largest in the starting field.

Fourteen vehicles contest the Pro-Am class. Aside from Herberth Motorsport, another newcomer campaigns a 911 GT3 R in the long-distance classic: the EBM Giga Racing belongs to Will Bamber and his brother Earl, who claimed overall victory twice at Le Mans in the 919 Hybrid as a Porsche works driver. To be eligible to contest the Pro-Am category, at least two drivers must have ‘bronze’ status, share the wheel for at least eight hours and spend at least 60 minutes in the cockpit per race quarter.

In the Am Cup reserved exclusively for privateers, Porsche is represented by Huber Motorsport and Hägeli by T2 Racing. In this category, too, four drivers share each cockpit, of which at least three must hold ‘bronze’ status and the fourth must have no higher than ‘silver’ status.

Sebastian Golz (Project Manager Porsche 911 GT3 R): “After we won the Spa 24 Hours in 2019 and 2020 with the Porsche 911 GT3 R, expectations are obviously very high. In the past few years, teamwork has been the secret to success. This is precisely what we want to continue perfecting. We have 10 teams with 12 cars tackling the Pro, Pro-Am, Silver, and Am categories. Everything is possible on Belgium’s tradition-steeped racetrack. Like at the Nürburgring, the weather conditions can change completely within a very short time. So that’s why we put a lot of emphasis on supporting our customer teams with helpful information at the track. We’ll do our very best to make a hat trick at Spa possible.”

Even the lead-up to the Spa race was a bit of a rollercoaster for us. I was supposed to compete for Frikadelli Racing but it was cancelled at the last minute because of the disastrous flooding in the Eifel – a devastating situation in Germany where many lives, livelihoods and homes were lost. Michael Christensen, Dennis Olsen and I now get the chance to contest this 24-hour race with Schnabl Engineering. We’re highly motivated and, we’ll do our absolute utmost – I can promise that. Spa is one of the biggest events of the entire GT3 season. I’ve climbed the podium at this endurance classic in second place, but I’ve not yet won it ...”

Matt Campbell (GPX Racing, Porsche 911 GT3 R #22): “There’s no doubt that we’re well-positioned with our GPX Racing team – we underlined this with our strong performance at the last GT World Challenge Europe race in Le Castellet. We’re leading the championship so we’re heading to the Spa 24 Hours feeling very confident. The team won there in 2019, so they know how to do it. There’s definitely only one goal for us in Belgium – victory!”

Mathieu Jaminet (GPX Racing, Porsche 911 GT3 R #22): “The 24 Hours of Spa is my personal favourite on this year’s racing calendar. The endurance race is the largest GT3 event in the world and an important one in the GT World Challenge Europe. We currently rank first in this championship with our GPX Racing team. A good result in Belgium is critical to increase our chance of claiming the title. Our plan is to be cautious in the first few hours then go all-out for the last four or five hours. Let’s see if that works. In the past two years, a Porsche 911 GT3 R has won Spa. That’s a good omen for us.”

Kévin Estre (Rutronik Racing, Porsche 911 GT3 R #21): “I’m delighted to compete at Spa this year. I have shared a cockpit there with Richard Lietz for the last three years and now Sven Müller is joining us. He’s another very fast guy with a lot of experience. Rutronik is new to the series and to Porsche, but they have very accomplished people, such as the team’s sporting director Manuel Reuter. They underlined just how competitive they are at the Nürburgring 24-hour race. The field includes a lot of cars capable of winning and that’ll be super cool. Spa is always a highlight for me – with spectators this year.”

Richard Lietz (Rutronik Racing, Porsche 911 GT3 R #21): “The 24-hour race at Spa-Francorchamps is one of the world’s toughest GT3 races. I know my teammates Kévin Estre and Sven Müller really well, and although Rutronik Racing is new to me, we got to know them at the Spa pre-test. The car should be good. I’m feeling positive about the race. The grid will be packed, so we need to survive the start unscathed. Then let’s see where we stand ...”

Laurens Vanthoor (KCMG, Porsche 911 GT3 R #47): “The 24-hour race at Spa-Francorchamps is my home race, so I’m really looking forward to this event. It’s one of the world’s largest GT3 endurance races with strong manufacturers, teams and drivers. The competition this year is extremely exciting and intense. I won here last year, and I’d very much like to repeat that with the KCMG squad and my teammates Nick Tandy and Maxime Martin. Like me, Maxime comes from Belgium – he’s from Wallonia, I’m from Flanders. To date, we’ve always been rivals, but now we’re teaming up. That’ll be great fun.”

Romain Dumas (Dinamic Motorsport, Porsche 911 GT3 R #56): “With almost 60 GT3 vehicles on the track, the Spa 24-hour race will be one of the toughest challenges of the year. I won this race in 2003 and 2010 and I always enjoy competing there. But you never know what you’re going to get in the Ardennes. Bad weather could be advantageous for us. In fact, I’d be happy if it rained. Hopefully, we’ll achieve a good result there.”

Live streaming of the event

The Spa-Francorchamps 24 Hours takes off on 31 July at 4:30 pm. A free live stream of the classic is available on the website http://www.intercontinentalgtchallenge.com. 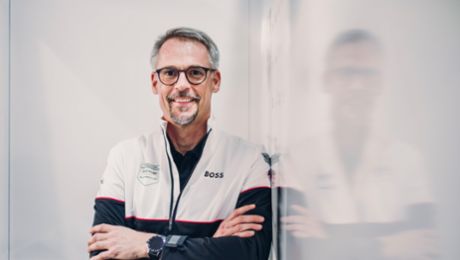 Thomas Laudenbach takes over as head of Porsche Motorsport

Thomas Laudenbach (53) will assume the role of managing Porsche Motorsport on October 1, 2021. The accomplished German engineer takes over from Fritz Enzinger (65), who has led the racing department of the sports car manufacturer to countless successes since 2011.