Murray, along with Cameron Hill, were the only two drivers to record Carrera Cup Australia round victories last year, before the 2020 season was prematurely halted due to the impact of the COVID-19 pandemic.

New to the Queensland outfit for 2021 is Jackson Walls, who made his impressive Porsche 911 GT3 Cup car debut in the same Porsche Michelin and PAYCE Cup event last year, finishing as high as fourth in the final race. The 18-year old makes the move up to Carrera Cup this year after joining Arden Motorsport for the 2020 Formula Renault Eurocup season. Walls previously campaigned open-wheel formulas such as Castrol Toyota Racing Series, Australian Formula 4 Championship and the F3 Asian Championship.

Tim Miles will spearhead McElrea’s Pro-Am class attack. The Sydney businessman will again be a strong contender for class honours in 2021, continuing to grow in belief and confidence every year. This was evident when Miles most recently took pole position in qualifying in the 2020 season opener in Adelaide, among a highly competitive Pro-Am field.

Murray, Jones and Walls will all be looking to emulate the careers of former McElrea Racing graduates, Matt Campbell and Jaxon Evans, who have progressed up the Porsche Motorsport Pyramid and gone onto forge top-level international careers with the Porsche factory team and its customer GT teams.

The 2021 Porsche Paynter Dixon Carrera Cup Australia calendar gets underway on 19-21 March at Sandown Raceway in Victoria, as the premier support category for the Repco Supercars Championship.

Team Owner, Andy McElrea: “We are really looking forward to the 2021 Carrera Cup & Sprint Challenge championships. For the first time in our 13 year history that we have the perfect number of customers for our business model, that is 4 cars in each championship, with businessman Richard Cowen also doing a partial Sprint Challenge championship and (Christian) Pancione doing some selected rounds of the Carrera Cup championship in preparation for 2021. We all realise that we will need to be flexible with plans and logistics for 2021, as some disruptions are inevitable, but we love a challenge and are always prepared to adapt on the run. We’ve already started testing with our Sprint Challenge drivers, while our first Carrera Cup test takes place in February.”

Cooper Murray: I’m really looking forward to working with McElrea team again in 2021 and continuing the form we showed at the start of last year. My goal is to win the overall championship and that ticket to the Porsche Junior Shootout!”

Harri Jones: “Personally, everything has ramped up for 2021. I am fitter, stronger and faster than I have ever been. I am ready to fight for the 2021 championship.”

Jackson Walls: “I’m really excited to be starting my Touring car career with Andy McElrea’s team and all the boys at McElrea Racing, who I have grown-up around. I’ve had an awesome bond with the team for the past few years. This year's a bit different, because I’m the one driving, not my dad, so it’s great to switch roles… especially with the best team in the business.”

Tim Miles: “2021 will be my eighth consecutive season driving for McElrea and I’ve enjoyed many race wins and a Sprint Challenge Pro-Am championship. I’m really looking forward to getting back on track after a pretty quiet 2020.” 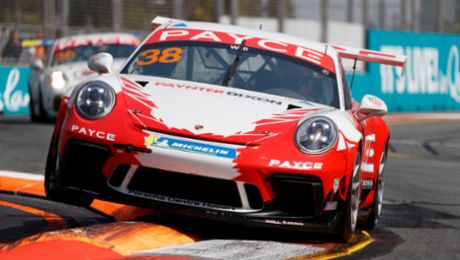