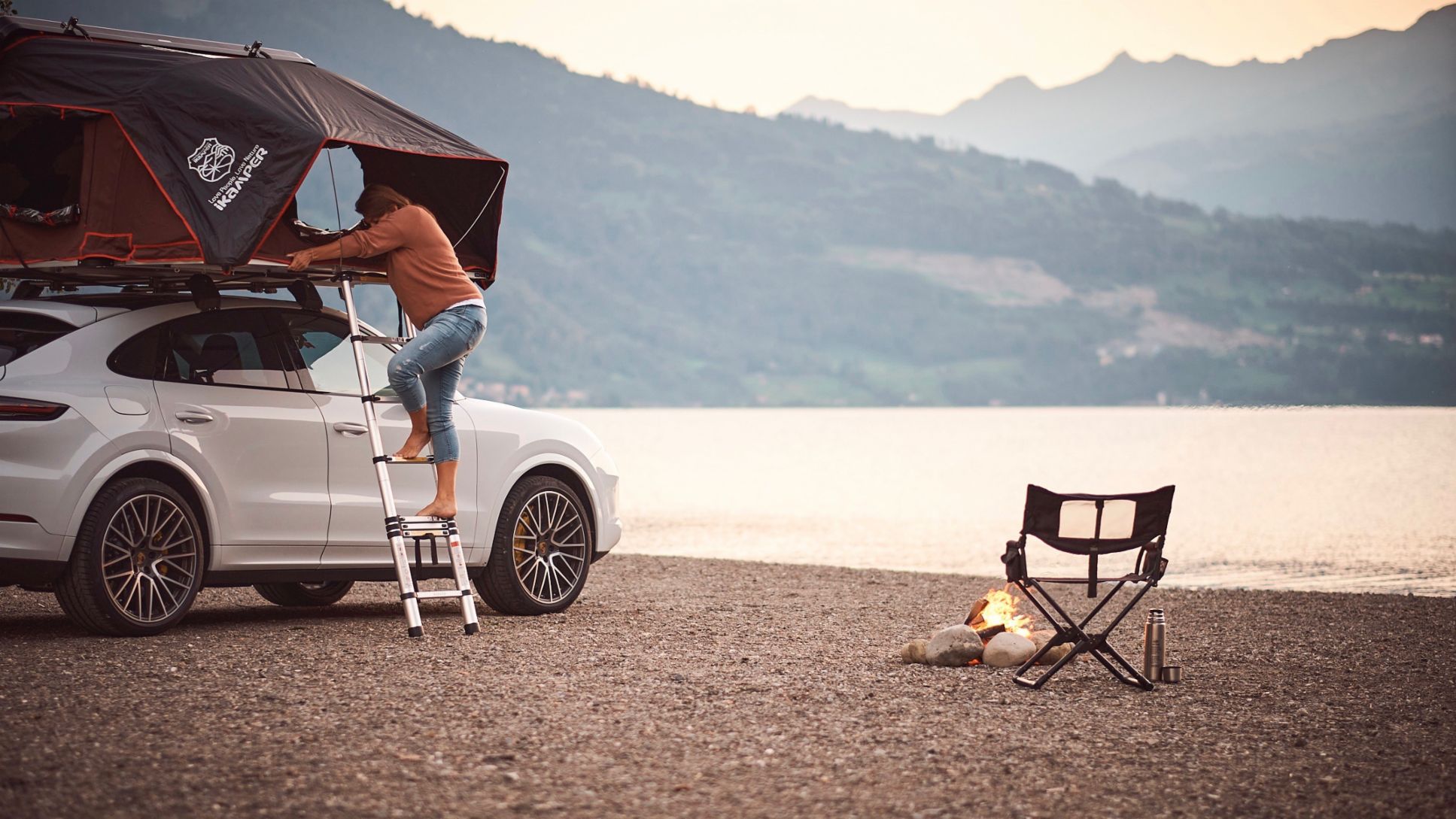 Atypically Swiss moment: a winding, one-lane mountain road, a yawning gorge to the right, and of course an oncoming mail bus at this very instant. No time for shaky nerves in the passenger seat. With preternatural calm, Simona De Silvestro backs up in her Porsche Cayenne Turbo Coupé, confidently edging ever closer to the precipice until the yellow bus can squeeze by. The driver gives a friendly wave, De Silvestro accelerates. Once atop the plateau, she takes in the panorama of the Bernese Oberland.

Cows graze in verdant Alpine meadows; high above them, the hulking masses of rock and ice of the Wellhorn and Wetterhorn jut across the blue sky. “My homeland is a dream,” says the professional race-car driver, extending her arms as if to gather it all in. After this moment of repose, the trip heads back down toward the valley. Our destination is the Manor Farm 1 campground on the shores of picturesque Lake Thun. De Silvestro was born in Thun in 1988. The embarkation point of her journey into the world.

Camping was a popular escape for De Silvestro in the COVID-19-impacted summer of 2020. “I’m a mountain kid and a very active person.” Eight-hour hikes, grueling rides on her mountain bike, or stand-up paddling to the point of exhaustion are physical and mental training for her profession. The Switzerland native is one of the best female race-car drivers in the world. She competed in the renowned Indianapolis 500 five times, gained Formula One experience with the Sauber team, drove regularly for the Formula E team of Andretti Autosport, and was the first full-time driver in the popular and demanding V8 Supercars Championship in Australia.

The high point of her career so far: since September 2019, De Silvestro has been a Porsche factory driver – the first woman ever to do so. The sports-car manufacturer deploys her talents as a test and development driver in the TAG Heuer Porsche Formula E team. Having been in the series since 2015, she is an experienced Formula E driver. In 2016 she became the first female to score points in the series. She was therefore well positioned to help the young Porsche factory team in its 2019/2020 debut season, particularly in its exacting preparations in the racing simulator at the Weissach Development Center. Maneuvering at the campsite is by no means a digital proposition. The Cayenne has to be parked perfectly level in the here and now. “I don’t sleep well with a tilt.”

Ten years ago, she could not have imagined ever racing in an electric car, says the thirty-two-year-old. But times have changed. “The cars in Formula E are getting faster and faster and more efficient, the races are cool, the power density is high, and the wheel-to-wheel battles are always exhilarating.” She’s also enthusiastic about the series because her generation is fiercely concerned about the environment. “When I look back in thirty years, I want to be able to say: ‘I was there when it all began in Formula E.’ With all-electric racing, we are also pointing the way to the future of mass mobility.” Alongside her Formula E job, De Silvestro also competes in the German GT Masters series on Timo Bernhard’s team, driving a Porsche 911 GT3 R. “No matter where, Porsche races to win – that’s the brand’s standard and mine as well,” she says with stirring passion.

No easy way to the top

De Silvestro’s racing career was uncertain more than once. There was no lack of talent, performance, passion, or assertiveness on her end in a male-dominated sport, to be sure. But sponsorship money was scarce. The Formula One project also failed for budgetary reasons. “But I'm determined, persistent, and extremely averse to losing, so I never gave up,” explains De Silvestro as she expertly tends to the grill. The roof tent has since been erected for a night beneath the stars.

Even as a little girl, she dreamed of a Formula One career. She watched grands prix on the couch beside papa Pierluigi and sat on his lap in the go-kart. At the age of seven, after much pleading, and with legs finally long enough to reach the pedals, she got her own kart. She competed in kart races for ten years before getting her start in formula racing. De Silvestro, who thanks to her father also holds an Italian passport, drove her first races in the junior racing series Formula Renault in Italy in 2004.

At seventeen she dropped out of school and moved – alone – to Indianapolis. A sponsor had been found in the USA. In Europe, she would have had to give up, she says. Successes in the Atlantic Championship led her into the American counterpart to Formula One, the IndyCar series. De Silvestro was named rookie of the year in the Indy 500 in 2010, and in 2013 she made it to the podium as runner-up in the Houston race.

Between those two highlights lies a shadow, her most serious accident: on May 19, 2011, the rear suspension of her Dallara broke during training for the Indy 500. De Silvestro spins out at almost 350 kmh, crashes into the wall, bounces off; the car bursts into flames and comes to a halt after a rollover. De Silvestro is hanging upside down in her harness, suffers second-degree burns on one hand and loses confidence because the material has failed – not she. Her mother, who has learned to cope with fearing for her speed-obsessed daughter, becomes her greatest support. She advises Simona to continue as quickly as possible. So De Silvestro climbs back into the cockpit less than forty-eight hours after the crash. She makes it into the qualifying and is dubbed the Iron Maiden by motorsport fans. She likes the nickname. She’s less a fan of the eponymous rock band.

In late 2019, after ten years in the USA and three years in Australia, De Silvestro returned home. Not to Lake Thun, where she was born, nor to Lake Geneva in French-speaking Switzerland, where she grew up from 1990 onwards and where her father still runs a car dealership. Now the globetrotting nature-lover lives a ten-minute walk from the shores of Lake Zurich. From there, she’s quickly on the water with her stand-up paddleboard, a quick jaunt from the mountains for camping, hiking and skiing, and of course just up the road from Germany, Porsche, and the racetracks. Her return to her home continent is associated with big goals. “I want to compete for wins and championships, and with Porsche it’s possible.” And she adds, “As a woman, I want to make history with Porsche.” 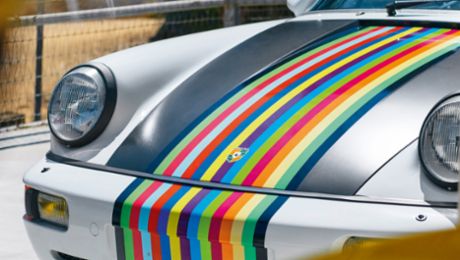 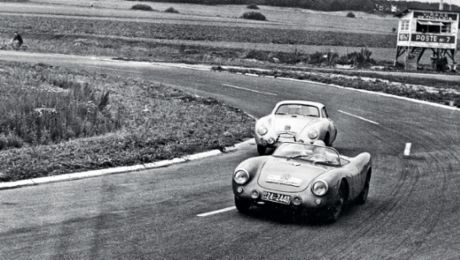 Annie Bousquet – tragedy followed on the heels of triumph

Annie Bousquet's world-record drive in a Porsche 550 Spyder fascinated her contemporaries in 1955.