Few car brands have a longer and more glorious history in Australia than Porsche, which celebrates 70 years ‘down under’ in 2021.

Sitting centrestage and unadorned on the bare polished floorboards of South Melbourne Town Hall, the burgundy 356 Coupé looked more like an alien spacecraft than the early cars most Australians were accustomed to in November, 1951.

Just a year after the first Porsches went on sale in the USA, Australia became the company’s second export territory outside Europe and its very first right-hand drive market, cementing the foundation of a unique and close relationship that continues 70 years later.

Nearly three years before the arrival of the first Volkswagen Beetle, the early Stuttgart-built split windscreen Porsches were very modestly adorned, lacking the visible steel chassis, timber framework and wire wheels that were hallmarks of what was considered a sports car of the era. However, the world’s first production right-hand drive 356 Coupé and its sister Fish Silver Grey 356 Cabriolet were soon to change minds as well as turn heads. 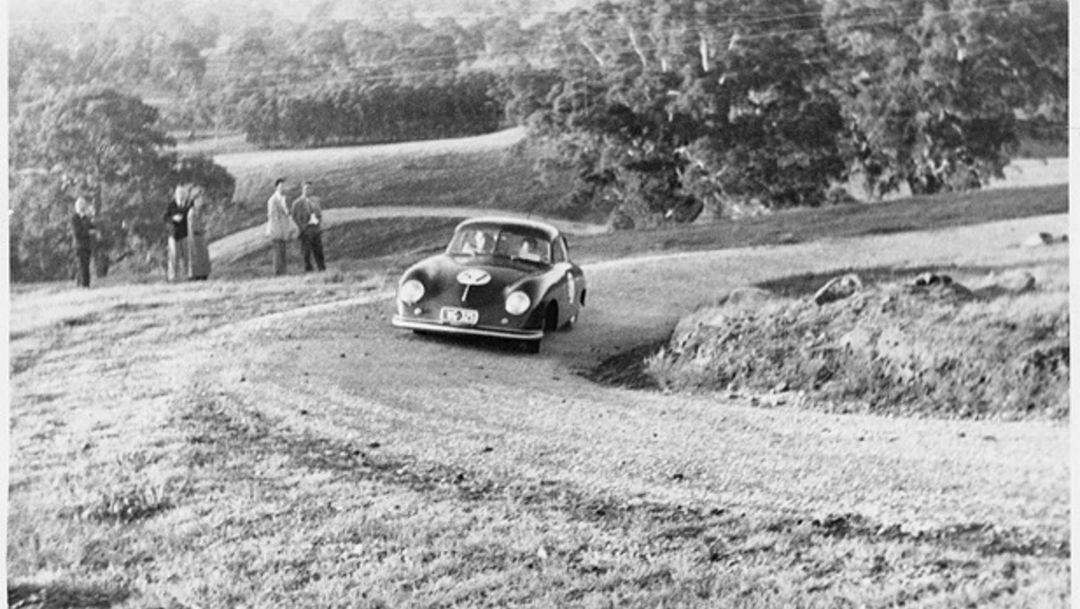 It wasn’t long before Porsche customers tapped into the cars’ rich motorsport DNA.

Notable hillclimb, sprint and circuit appearances in Victoria and South Australia added substance to the little Porsche’s unique style, while the low-slung and overloaded coupe earned public admiration after it thumped and ploughed its way for 10,400 kilometres over some of Australia’s worst roads to complete the 1953 REDeX Round Australia Trial.

Sadly, this important foundation for the growth of Porsche to become Australia’s most successful sports car was not immediately reflected by sales. Under the import restrictions prevailing at the time, vehicle numbers were related to retail prices, with the number of Porsches that could be sold each year pegged at just 2.5.

In stark contrast, more than 4,000 Porsches of all models are expected to be delivered in Australia in 2021, thanks in part to 70 years of unbroken brand representation that is amongst the longest and most enduring in the entire Australian automobile industry.

Multiple sports car and GT championship titles with 911 derivatives throughout the 1960s,’70s and ‘80s; a record number of Targa-style tarmac rally victories; ultimate accolades in Performance Car of the Year judgements by journalists; pioneering trips by Porsche sports cars across the Simpson Desert and to the tip of the Cape York Peninsula, plus a consistently high profile in contemporary Australian motorsport through the Porsche Carrera Cup Australia, which has supported the V8 Supercars Championship since 2003—they have all played their part in elevating the Porsche profile.

911 Turbo to the Tip of Australia

The gnarly, rocky tip of the Australian mainland has not seen many Porsche 911 Turbos. Just one to date, in fact.

Porsches have consistently broken the boundaries of what sports cars can do.

Because of the Australian market’s unique and longstanding relationship with the factory and its flair for marketing innovation, many unique Porsches have found their way to the Antipodes. These include not only those first two right-hand drive 356 models, but also the 550 Spyder that followed; the three roll-cage festooned 911 built to contest the 1968 London-Sydney Marathon; the show prototype of the first production 911 Turbo; the first front-engined 924 to compete in a major rally; the world’s only right-hand drive 944 Cup; the world’s only right-hand drive type 964 911 RSR 3.8 and a unique type 996 911 Aboriginal Art Car.

Australia has also played an important part in the pre-production testing of several new Porsche models, including the front-engined Cayenne and Panamera.

After a full year of celebrations, the 70th anniversary year will come to a stylish and symbolic close in early November with an event staged in South Melbourne Town Hall, where Australians got their first glimpse of those first two Porsches back in 1951.