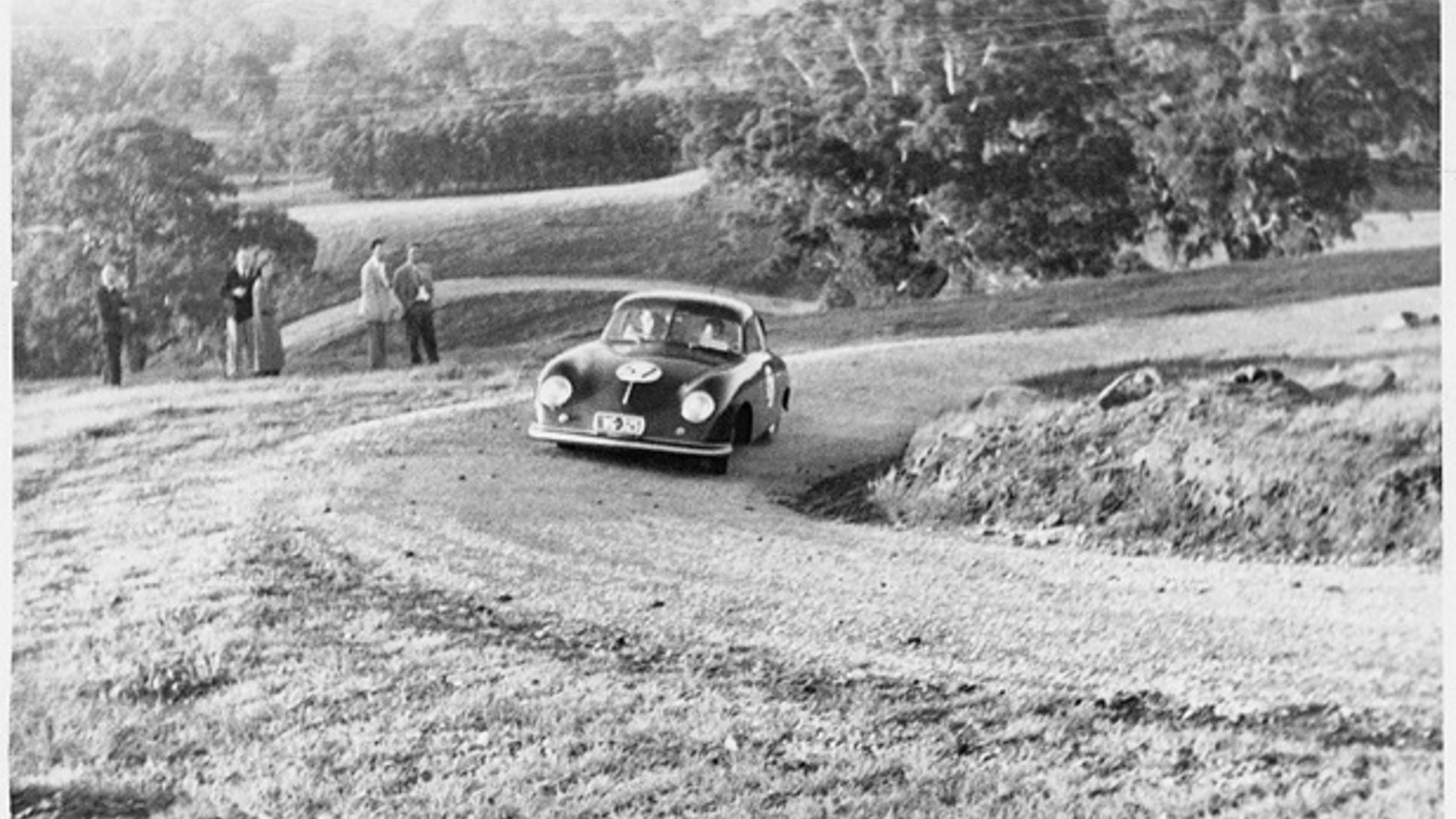 Most Porsche enthusiasts have their own special memory of how they were first smitten by the marque.

For Melbourne pump distributor, Norman McKinnon Hamilton, his Porsche ‘moment’ came at the age of 41 in the early summer of 1951 on one of the 36 switchback corners of Austria’s famed Grossglockner Pass.

On his way from Austria to Switzerland to investigate the latest in pump technology for Australia’s nation-building Snowy Hydro project, his cumbersome rented Oldsmobile 88 was ’rounded up’ by a low slung, silver sports car.

In a village further up the valley, he came upon noted German racing driver and Porsche tester, Richard von Frankenberg, at an inn, with his silver steed still ‘pinging’ hot outside. The two struck up a conversation.

Interrupting his mission of refining its chassis, von Frankenberg showed Norman Hamilton over the sleek little car. Then, in a burst of entrepreneurial enthusiasm, Hamilton followed the German back to the Porsche factory and after a formal introduction to Ferry Porsche, followed by a short factory tour, he secured the Australian and New Zealand commercial rights to sell the rear-engined sports cars on a hand-shake. In doing so, he became only the second Porsche agent outside Europe, following Max Hoffman in the USA.

It wasn’t uncharacteristic for Hamilton, who was born in Preston, Melbourne in 1910 and was a calculated risk-taker. Leaving school early after the premature death of his father to become an accountant in the National Bank, he was interested in all things mechanical. He studied at night while working, getting his pilots’ licence before marrying and then serving in the Air Force during World War II.

After the war, he purchased a pump manufacturing company in South Melbourne on the site of the current Crown Casino. His first retail customer was another pump manufacturer, Kelly and Lewis Pumps, which took him to Europe in 1951 to research high-pressure mining pumps that could be used in Australia’s Nation-building Snowy Mountains Hydro-Electric Scheme.

It was an inspired time to become a Porsche distributor. Just a few months earlier, the design office founded in 1930 by Professor Ferdinand Porsche had completed its 500th eponymous car since production began in Gmund, Austria at the end of 1949. But none, with the exception of a lone aluminium-bodied coupe for the famous Austrian one-armed racing driver Otto Mathé, had been built with right hand drive.

This was no problem for Hamilton, a fearless entrepreneur, and the deal he struck included a supposed contribution to the tooling costs for the right hand conversion.

As part of the deal, the two 356s, a Fish Silver Grey split screen Cabriolet and a Maroon Coupe, were both to be produced in July 1951, with Hamilton arriving back at the factory in August to collect them with a friend, Andrew Kennedy, who was an active spy during and after the War. They then drove the cars across the Swiss and Italian Alps to Genoa, from where they were shipped to Melbourne, arriving in early October.

Then, on 1 November 1951, Hamilton introduced both cars to celebrities and motorsport identities at a function at the South Melbourne Town Hall, after which selected guests were driven for laps of nearby Albert Park Lake by Australian Motor Sports Club members, Ken Harper and Ken McConville. Guests were left suitably impressed with the performance of the unadorned little cars with their 1286cc air-cooled engines.

Just 40 months after the first Porsche had received its road permit in Austria, the make had arrived in Australia.

Alan Hamilton, Norman’s son, was then just nine years old and welcomed Porsche into his young life with enthusiasm. “I recall thinking that I was being dropped at school in a better car than the other kids,” said Alan.

The early days of Porsche in Australia were not very glamorous. Australian import restrictions severely limited the local Porsche population, with Hamilton supplementing his income by becoming an insurance loss assessor. He also started another company, Hamilauto, which manufactured automotive accessories such as trouble lights and battery pole and clamp cleaners, the latter in association with Harold Clisby, who became Porsche’s first South Australian Porsche dealer.

Just one more car arriving in 1952, another in ’53, five in ’54 and 15 in ‘55, but the tally grew to 84 in 1959. Three Porsche tractors and Porsche aero engines also arrived for evaluation during the 1950s, while Porsche industrial engines based on the cars’ later 1600cc engine found their way into Australia’s Antarctic Division, where they were used in over-snow transport by the SEC and the Man From Snowy River Hotel at Mt. Kosciuszko. Porsche engineering was truly part of Australia’s Post-War success story.

Porsche’s first Australian office as part of Australasian Lloyd Pty Ltd was on the eighth floor of the Southern Cross Assurance building at 315-317 Collins Street, Melbourne (which then belonged to the Brotherhood of St. Lawrence) and the showroom was the kerbside, with the parking officers suitably encouraged to turn a blind eye.

Although Norman Hamilton rarely raced himself, he was an extremely competent driver and embraced motor sport as a wonderful way to promote Porsche. This led to close associations with many of the top drivers of the day, including Otto Stone, Frank Kleinig, Harry Firth, Ken Harper, Ken McConville and Jack Brabham, to name just a few.

In 1953, people took notice of Porsche when the first low-slung Coupe driven by Hamilton and Ken Harper bumped and ground its way around Australia to complete the first 10,400km REDeX Reliability Trial, carrying few spares but more than a dozen pairs of Norman’s shoes – just in case he met any prospective customers or celebrities on their travels.

As Porsche sales initially rose at a glacial pace, Alan met and mingled with many motorsport identities who were attracted to the new sports cars and also watching his father building light planes at Moorabbin Airfield. By the age of 12, he was determined to join them. He and his friends – like later 1980 Formula 1 World Champion, Alan Jones – both drove their fathers’ cars as children.

“I was going to Camberwell High School, but my marks weren’t good,” said Alan.

“My parents thought I was aimless, so they sent me off to vocational guidance and they were stunned when they were told my ambition was to be a racing driver.”

After subsequently failing his first year at Swinburne Technical College, he then took a cadetship at William Adams Tractors working on Caterpillar earthmoving equipment. He also and tried his hand at real estate, but at the dawn of the 1962 Credit Squeeze decided, Norman decided it was time he Alan with his destiny, which he believed was to work in the family business.

Alan’s initial task was to help set up a proper Porsche service division in Melbourne, before moving to the retail side. But the big marker in his young life came on his 18th birthday on 29 July 1960 when he passed his driving test and got his racing licence from Motorsport Australia the same Friday afternoon. The latter was essential, as he was already entered in his first motorsport event – a motorkhana at the Templestowe Hillclimb venue – that Sunday in the old small window 1954 VW Beetle he already owned.

As he recalled of his motorsport debut, his enthusiasm was greater than his skill, but he was not easily deterred. Wanting something faster, he acquired a 1958 Porsche 356 Super on Hire Purchase, then looking to go still faster, he befriended another enthusiast with an engine-less racing car. He would tow it to meetings behind the 356, remove the Porsche’s engine, install it in the racing car for a day’s competition, then reverse the procedure to tow it home. Then came a 356 Speedster, with its 1600cc engine modified to output about 130 horsepower, and success followed.

When sent to the Porsche factory to broaden his product knowledge, he found the 904/8 Bergspyder sports car that had finished second in the 1965 Targa Florio road race lying unused in a corner of the Competition Department. After convincing them to replace its flat eight cylinder engine with a two litre 906 six-cylinder engine because it would be easier to maintain, he purchased the car, brought it back to Australia and scored a string of racing successes.

His victory in the 1966 Australian Hillclimb Championship was Porsche’s first Australian national title. Before long, mechanical components from the 904/8 were transferred into a later and more sophisticated Type 906 chassis, generating further circuit success, plus another National Hillclimb Championship in 1971. In 1981 he made it three with a Porsche-engined hillclimb ‘special’.

On a visit to the Porsche factory in early 1968, he ordered a new six cylinder 911 TR to comply with the revised FIA regulations adopted by CAMS that made Porsche 911s eligible to race as Touring Cars against the big American V8s in Australia.

Fresh off the boat with a 204 horsepower Type 906 engine, Hamilton drove the 911 to third place after a last lap puncture in the single race 1968 Australian Touring Car Championship and came to with a single point of taking the multi-race 1969 title.

At that stage in the cautious post Credit Squeeze years, all Porsche were ordered ex-factory to customer requirement, but Alan was even more of a risk-taker than his father and wanted to order cars for stock, rather than to firm customer order.

After old and new Hamilton bulls argued the case, in 1972 at a ‘kitchen table’ board meeting and with the support of Alan’s mother Flora, Norman agreed to hand over control of the Porsche company to his then-29 year-old son. Alan still played hardball and also convinced his father to transfer the company shares to him in case he changed his mind down the line and afterwards moved Porsche into an imposing new purpose-built showroom in Chapel Street, South Yarra, with sales growing to 190 cars in 1974.

Alan Hamilton’s style of running Porsche was similar to his father’s, with the company’s growing an image built to a large degree on entrepreneurial feats and success in motorsport, with 911 variants winning the Australian Sports Car Championship six times in succession between 1976 and 1981 and then dominating the Australian GT Championship with Porsche 935 models in 1982 and 1983.

While Alan’s racing career stalled was cut short by a serious accident at Sandown Raceway in 1978, Porsche’s Australian business grew from strength to strength.

Sales were booming with 660 cars sold in 1985 and 657 in 1986. Expansion of the range to include front-engined ‘transaxle’ 924, 944 and 928 sportscars necessitated a move to larger and more prominent premises in the late 1980s, with Hamilton taking a deep breath before acquiring and renovating the sprawling former Bryant & May match factory in Church Street, Richmond. Then, in 1989, the Recession struck.

It all came to a head in February 1992, when Porsche AG took control of all Porsche operations in Australia, ending 41 years of Hamilton family control that had laid the strong foundations on which the company has grown to be one of the longest continuously represented makes in the Australian motor industry.

Sadly, Norman Hamilton wasn’t there to see his project reach this milestone. He died just a month before Porsche Cars Australia was formed by the head office takeover.