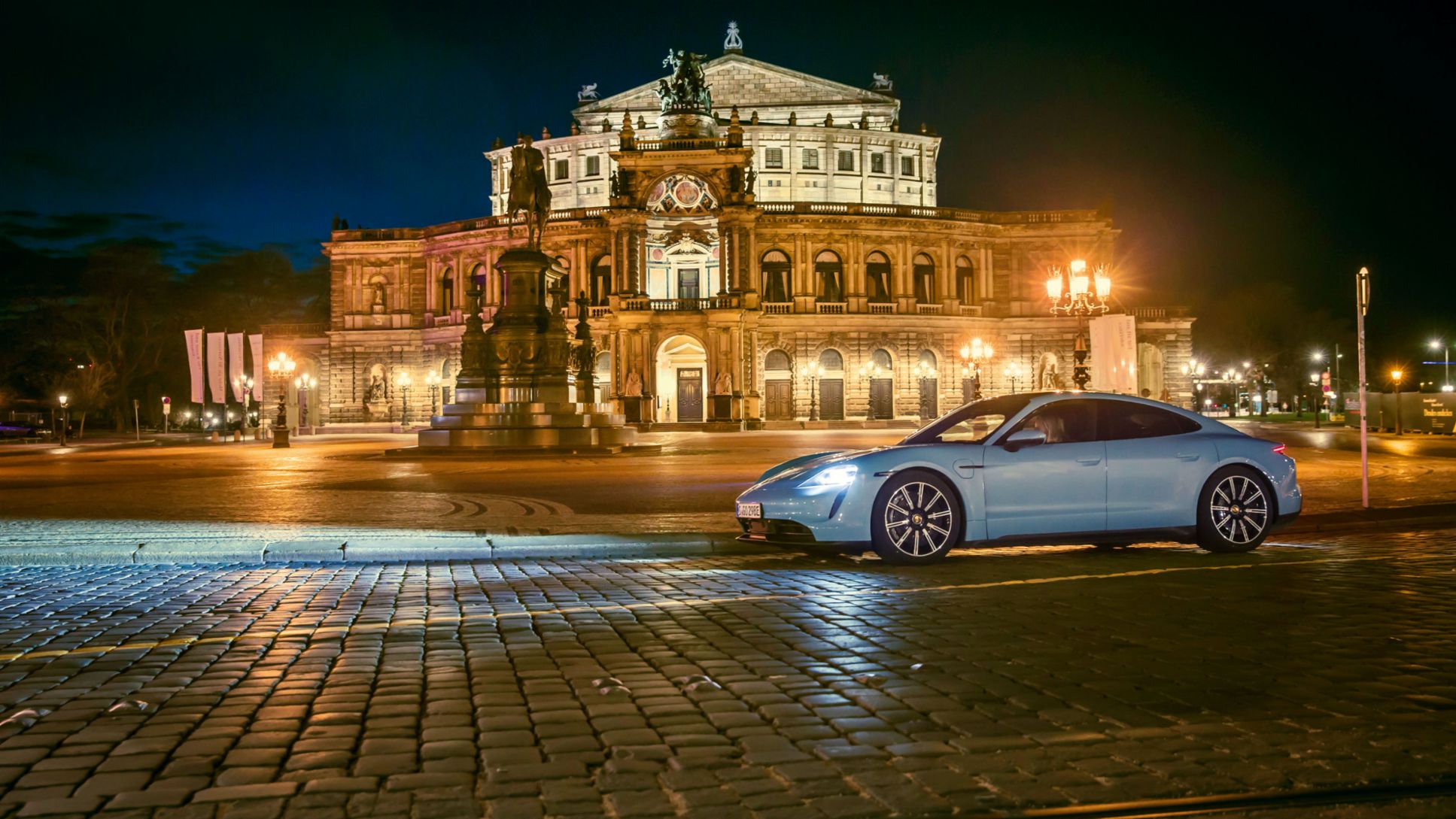 A journey through Germany while not only Le Mans, but also Germany stands still. Steering clear of the German autobahn on tree-lined country roads to lakes, nature and high culture. A journey to Goethe, Fontane, and Beethoven in the Porsche Taycan.

We drive through Germany as it lies peaceful and silent. No, not a twenty-four-hour race on the autobahn. We take our time and enjoy the country roads, following in the romantic footsteps of Germany’s poets and thinkers. Quietly and carefully, in a Porsche Taycan. Like a sailboat in the wind, we glide along in eventful and evocative silence. Traveling down empty roads to the great figures of history, in a present that’s itself making history. Our starting point is Neuschwanstein Castle in southern Bavaria, and we’ll travel up to Neuruppin, Brandenburg, which will be the northernmost stop on our tour.

The Taycan is the perfect companion to allow us listen to our own thoughts while we keep moving. We meet up with Goethe and Schiller in Weimar, Fontane in Brandenburg, and celebrate Beethoven’s 250th birthday in Bonn on the Rhine. Poetry and music dance in our heads.

We travel from south to north, from east to west. Just never from A to B on the autobahn. In the consciousness-expanding flow of the all-electric sports sedan, we explore the diversity of Germany. Operetta-like baroque contrasts with the clear lines of Bauhaus style. We enjoy medieval town centers, Gothic cathedrals, classicism, and wild nature.

Our view over the borders gives us a glimpse of neighbors in Austria, Poland, the Czech Republic, and France. We would also have liked to take a look at Denmark, but this spring the pandemic has cut us off from the beautiful coastal landscape in the north.

A visit with Goethe, Schiller, and Gropius

Weimar lies in central Germany, in Thuringia. The route to the city center takes us over cobblestones. Past the storied Anna Amalia Library, Platz der Demokratie (Democracy Square), and the City Palace. We park the Taycan and continue on foot—in the spirit of Johann Wolfgang von Goethe’s words: “Walking is the only way to truly experience your surroundings.”

So we walk to Goethe’s garden house, where the illustrious author took up residence in 1776—his first home in Weimar. And it was here, in this picturesque location in the Park an der Ilm, that he penned “Der Erlkönig” (The Erl King), a ballad that remains required reading in German schools to this day. Goethe’s house at Frauenplan as well, where he died in 1832, can only be seen from the outside.

Across the way, the Goethe fountain burbles, solitary as never before, while a Thuringian stalwart grills sausages nearby. A little more than five hundred meters away, a monument on Theaterplatz (Theater Square) recalls the city’s intellectual greats: Goethe stands next to his contemporary Friedrich von Schiller. “The Sorcerer’s Apprentice” meets The Robbers. These world-famous literary figures shaped Weimar’s golden age, which was followed by the city’s silver age with an emphasis on music, in particular the works of Franz Liszt and Richard Wagner around 1850. During the twentieth century, Weimar defined style again when the Staatliches Bauhaus was founded here in 1919. The basic idea of architect Walter Gropius was to free art from industrialization and to revive handicrafts. Form follows function—that was the creed of these pioneers of modern building and thought. A creed that would revolutionize architecture around the world. Like the Classical Weimar ensemble, the Bauhaus buildings in Weimar, Dessau, and Bernau are UNESCO World Heritage Sites.

While the Taycan recharges, we read about the Elbsandsteingebirge (Elbe Sandstone Mountains) and our next destination: Dresden, where the writer Erich Kästner was born. It’s hard to imagine a German childhood in the last century without his children’s books like Emil and the Detectives or Lottie and Lisa.

We return from dreams of childhood days; the batteries are back at 100 percent. Time to go. Just a few kilometers further up the road, our surroundings become uniquely bizarre. Craggy sandstone landscapes rise up, shaped by water and wind over millions of years. We think back to geography class, to the moving Earth and continental drift. The Elbe River interrupts our thoughts of plate tectonics as we cross over it. A delicate river like a connecting seam between two countries—Bad Schandau, Saxony, on this side; on the other shore is Děčín in the Czech Republic. Near the border we see the Lilienstein, symbol of the Sächsische Schweiz (Saxon Switzerland) National Park.

From up there we could see Dresden’s Frauenkirche (Church of Our Lady). We drive on, passing the lovely town of Pirna en route to Dresden. We learn that the writer Theodor Fontane worked here as an apothecary’s assistant. Goethe and Schiller are also immortalized in Saxony’s capital, together with sculptures of other world literary figures in front of the Semperoper. The opera house, which was destroyed several times, bears the name of its architect, Gottfried Semper. Goethe’s Iphigenia in Tauris was performed at the opera house’s official opening in 1878. But for the time being, all is silent.

With Fontane en route through Brandenburg

The treetops touch each other oh so slightly, the shadows of the branches form patterns on the asphalt. Romanticism in Brandenburg. Tree-lined country roads that look as though they were painted. As we quietly glide through them on electric power, Theodor Fontane comes to mind: “I have roamed through Brandenburg and found it richer than I had dared to hope,” he once wrote.

Fontane, son of an apothecary and one of poetic realism’s foremost representatives, was born northwest of Berlin in Neuruppin, Brandenburg, in 1819. He loved to travel, but especially in distant countries he always remembered his homeland, rhapsodizing about its rivers, lakes, dams, and forests. The literary and theater critic referred to the numerous country roads of Brandenburg and Western Pomerania as “green groves of travel,” and their dense canopy of leaves in summer served as his inspiration.

The near sixty-kilometer-long Oderbruch, the region along the Oder River bordering Poland, is the focus of Fontane’s Wanderungen durch die Mark Brandenburg (Ramblings through Brandenburg). His most famous work, Effi Briest, was published in 1896, two years before his death. He’s commemorated in a bike path, the Fontane house in Bad Freienwalde, and a bronze bust in front of his father’s pharmacy in Letschin. Fontane’s first name was Heinrich. In contrast to his work, this has fallen into oblivion.

Bonn is celebrating. The year 2020 is all about Ludwig van Beethoven. The perhaps greatest composer of all time was born here at the Rhine River 250 years ago. An exceptional talent, one of the most gifted pianists in the world. Beethoven’s most famous work may be his Fifth Symphony. The first four notes—three eighth notes followed by a half note—are a catchy combination from the classical period. Beethoven himself was already hard of hearing by his late twenties and nearly deaf at the end of his forties. But he kept on composing, “hearing” the notes with his eyes. At Bonngasse 20, we see the house where he was born—now a museum—with its baroque stone façade. The adjacent buildings house the chamber music hall and the Beethoven Archive. Perhaps the composer was even sitting up there at the window when he immortalized Friedrich Schiller’s famous “Ode to Joy” in the fourth movement of his Ninth Symphony, which Europe chose as its anthem two centuries later in 1972. The genius with the wild hairstyle liked to travel to the nearby Siebengebirge mountain range, especially to Petersberg on the western edge. This is also where, at 333 meters above sea level, the Hotel Petersberg has welcomed the most important heads of state as guests: President Dwight Eisenhower and the last emperor of Abyssinia, Haile Selassie; Leonid Brezhnev, then secretary general of the CPSU, as well as a later successor Mikhail Gorbachev.

From Queen Elizabeth II to Bill Clinton, they all surely gazed down from these heights at the river that Heinrich Heine called “Father Rhine” in his satirical epic poem Germany: A Winter’s Tale, published in 1844. This European river travels 1,233 kilometers. Formerly a symbol of separation, it now radiates confident calm as a waterway bringing countries together. We enjoy the sublime view in silence.