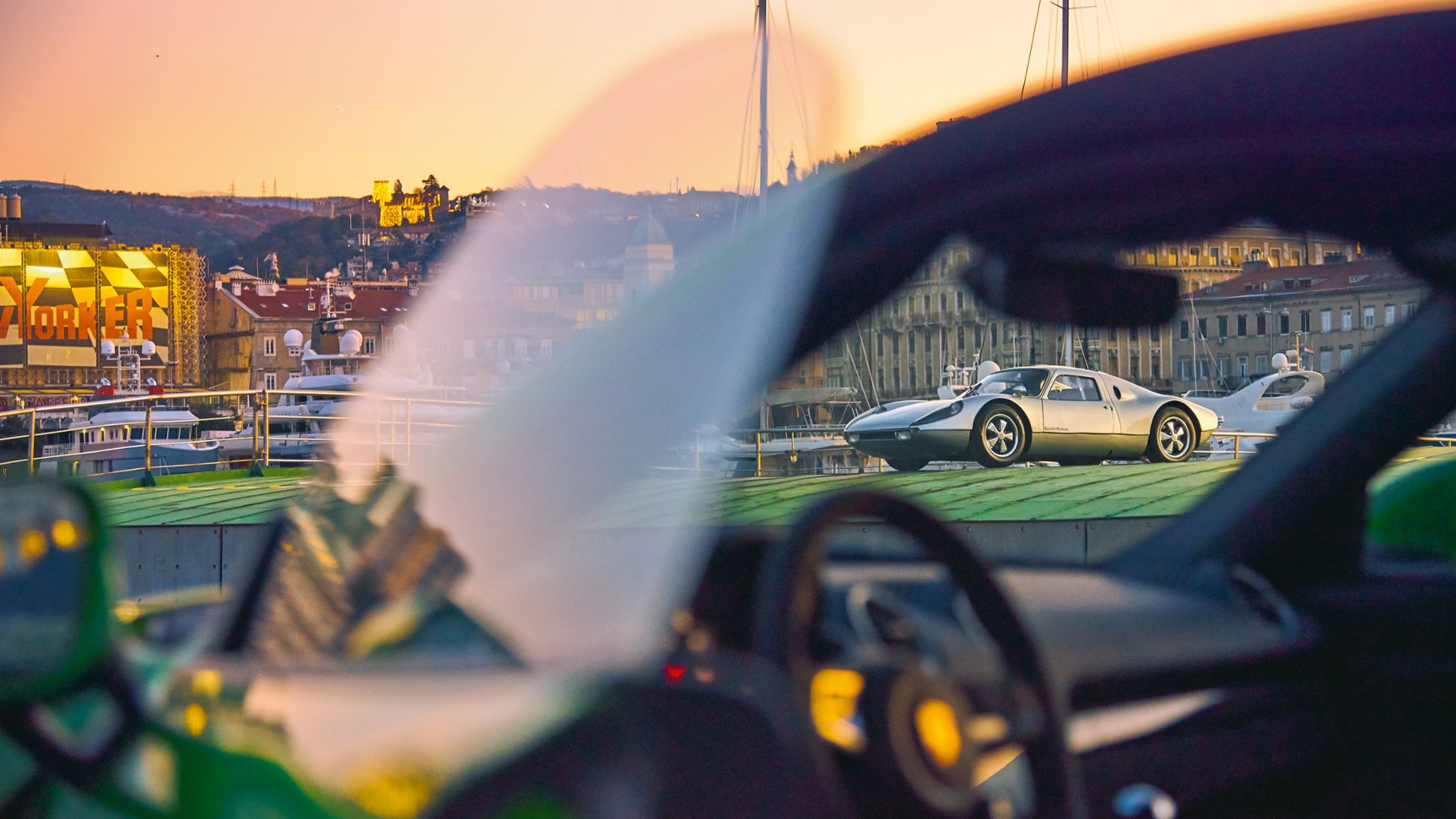 As the first rays of sunshine fall on the roofs of the port city of Rijeka, the new Porsche 718 Boxster GTS 4.0 (718 Boxster GTS 4.0: Fuel consumption combined 10.8 l/100 km; CO2 emissions combined 246 g/km) slices through the corners at the planetarium, high above the city. Even from a distance, the sound of the naturally aspirated six-cylinder boxer engine is clearly present, and you can hear the driver reveling in each of the six gears. Up here at the observatory next to a historic fortress, where everyone’s gaze is normally directed toward the universe, a new star is rising in the Porsche sky—offering a particularly high degree of performance, precise handling, and exclusive standard features.

The winding road seems to have been made for the Python Green roadster, which now elegantly makes its way back toward the harbor. The eyes of passersby in the city center are sure to be on it; heads turn, pedestrians pause, and an elementary school class cheers with pleasure—even the little ones recognize a Porsche from afar. Its iconic line accents form a universal design feature. This one is a GTS, a Gran Turismo Sport. If a Porsche, no matter what model series, bears the legendary GTS emblem, it means the usual high level of comfort with even greater sportiness. The Boxster winds its way between palaces that date back to the Austro-Hungarian Empire and prefabricated high-rise buildings from the socialist era. At the historic harbor causeway, which is called Molo Longo by the inhabitants because of its length of 1,707 meters, its companion is already waiting: the Porsche 904 Carrera GTS from 1963—the first of its kind because it launched the idea of GTS.

At the ferry pier, the junior meets its forefather—the legendary 904 Carrera GTS awaits its offspring with the venerability and poise of a sculpture. Ferdinand Alexander “Butzi” Porsche, who had been responsible for the 911’s design, drew the 904. Yet for all its unquestioned beauty, the original GTS, with its striking headlights and fiberglass-reinforced plastic bodywork, was impressive as well, not only for its design, but also for its inner values: 650 kilograms, 1.06 meters high, 132 kW (180 hp), and a top speed of 263 kmh. In 1964 the race car, endowed with the usual road approval, took the international endurance racing scene by storm. Its career began with a class win in Sebring, continued at Le Mans, and—as a highlight—the 904 GTS even managed a double victory at the Targa Florio, the infamous endurance race in Sicily. This success was the birth of a new seal of quality: GTS.

The acronym still stands for more power, more speed, more performance. In short, more Porsche. This was true of the 924 Carrera GTS Rally of 1981, with which Walter Röhrl won the German Championship, and of the first 911 Carrera GTS of 2010; and it was true of the Cayenne GTS from 2012, one of the most dynamic SUVs of its time. The premise—performance and agility plus comfort—was originally intended to make it easier for private drivers to concentrate during a race. More than half a century after the 904 Carrera GTS caused a sensation, all Porsche models can be ordered in this extra sporty variant.

Back to today, back to Rijeka, which together with the Irish city of Galway has been named European Capital of Culture 2020. The Adriatic Sea lies quietly in the background; the water sparkles in Kvarner Bay; the yachts bob at their moorings. Under the motto “Port of Diversity,” the city has spruced itself up for the cultural year. More than six hundred events are planned, over four million visitors from all over the world expected; some hotels have been fully booked for months. Rijeka is a city of contradictions. Many rulers have reigned here and shaped the townscape: overlooked by the medieval fortress of Trsat, classicist mansions contrast with eyesores of the seventies. In between, abandoned factory halls and forgotten bunkers of the Second World War slumbered away. Now, the pearl of Croatia is being polished. Industrial buildings are being transformed into event locations or cultural meeting places; restaurants and bars are moving into bunkers. Old buildings shine with new luster.

The two Porsches blend perfectly into the scenery. The Boxster GTS 4.0 is a welcome ray of light in the hectic hustle and bustle of the shopping streets. But now it’s leaving town. On the nearby island of Krk, the new mid-engine sports car shows what it’s made of. The boxer revs and after 4.5 seconds reaches one hundred kilometers per hour. It could continue at that speed, but the road, the landscape, and the light are too impressive to simply rush past.

Stylish and well-rounded, the GTS 4.0 makes use of its beguiling potential: the boxer engine develops 400 hp (718 Boxster GTS 4.0: Fuel consumption combined 10.8 l/100 km; CO2 emissions combined 246 g/km) at 7,800 rpm; the top speed is 293 kmh. The standard Porsche Active Suspension Management (PASM), with a lowering of twenty millimeters, adapts to the individual driving style and, together with Porsche Torque Vectoring (PTV), ensures agile handling characteristics and maximum safety. Whether on serpentine roads, highways, or a relaxed urban outing on Sunday—the GTS is right at home.

One hairpin turn follows the next along the stony landscape of Krk. The mountain to the left; the precipice to the right, with the sea in sight. The speed is high; the Porsche 718 Boxster GTS 4.0 sticks to the road, and you almost feel like Baron Antonio Pucci during his triumphant drive with the 904 GTS at the Targa Florio in 1964. For the Italian had already swept over the twisting back roads of a Mediterranean island in his Porsche—Sicily, in his case. With his codriver Colin Davis, Baron Pucci achieved overall victory in the endurance race, which was held on public roads between 1906 and 1977. Ten rounds of seventy-two kilometers were completed after seven hours and some ten minutes—a victory that established a legend.

And the legend drives on today, in the form of the 718 Boxster GTS 4.0. Mid-engine configuration plus high-performance tires make for perfect balance and unwavering traction. The precise handling is impressive, as is the cornering agility. The sporty and elegant ambience contributes to the driving pleasure. Alcantara surfaces and seat covers come as standard and can be upgraded with optional color-contrasting seams. And whether on the rear or sides of the car, on the speedometer or headrest—the prominently placed GTS lettering makes a promise. This is the common denominator among all Porsche GTS models: three letters, one legend.

Rijeka makes a promise, too. Described by locals as a forgotten city, it’s on the verge of becoming a cultural epicenter. Nineteenth-century Rijeka, then one of the largest ports in Europe, even offered direct connections to New York. The city was mostly known as a trade metropolis before it became a hive of industry in the twentieth century. But those days are over, and the hope now is that 2020 will bring the city the opportunity to reinvent itself. Anyone who has ever enjoyed the culinary delights in one of the restaurants on Tito Square or visited one of the mobile bars in the Tunnel, a former underground fortress, will share this hope. The cultural year was opened in February with over 150,000 people at Croatia’s largest carnival—including festive parades, masked balls, and a car rally.

Down at Ploče Beach in the 718 Boxster GTS 4.0, we turn the key to the left of the steering wheel for the last time today, while the sun, low on the horizon, bathes the silver GTS forebear in shining golden light. The engine roars deeply one last time. The light plays on the bodywork one last time. But it’s not the last time for a GTS. Ever since Ferdinand Alexander Porsche’s first draft, Gran Turismo Sport has been a legend without end.