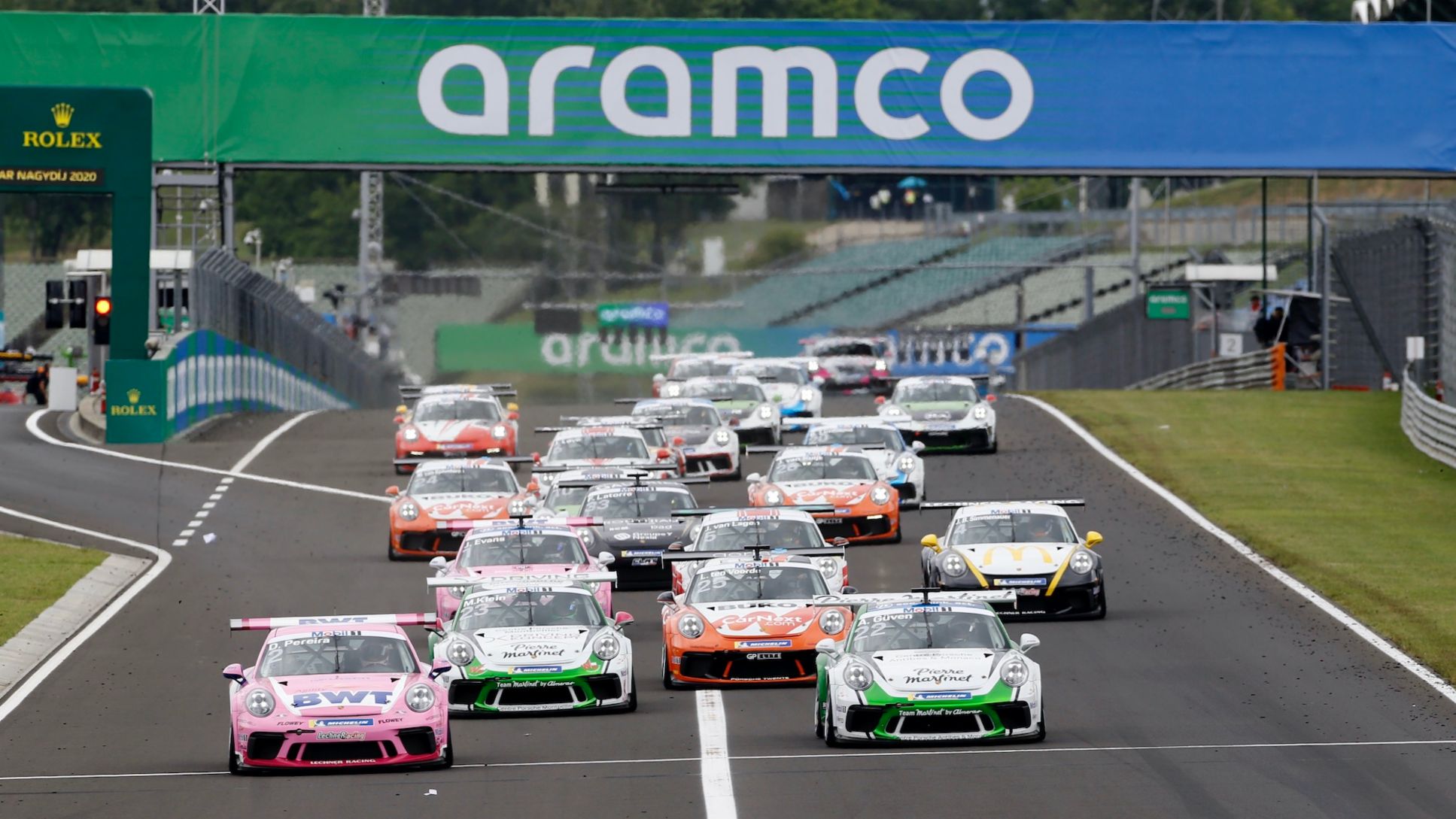 Dylan Pereira (BWT Lechner Racing) put in a dominant performance to take victory at round three of the Porsche Mobil 1 Supercup on the Hungaroring. After qualifying in pole-position, the Luxembourger achieved an uncontested lights-to-flag victory on the Grand Prix circuit close to Budapest.

“Ayhancan Güven put pressure on me during the first lap after the start and straight after the safety car phase, but I managed to fend him off. Afterwards, I focused on not making any mistakes,” Pereira commented after the race.

Porsche Junior Jaxon Evans (BWT Lechner Racing) qualified in sixth, after his fastest lap in the Saturday session was disallowed for exceeding track limits. After sparring with Jaap van Lagen (NL/FACH AUTO TECH) for fifth place in Sunday’s race, the two Porsche 911 GT3 Cup cars made contact in the braking zone for Curve 1.

A resultant puncture saw van Lagen retire out of contention and the race stewards adjudge Evans to be at fault, handing the New Zealander a drive-through penalty and effectively end any hopes of another top five finish.

By contrast, in only his third Supercup race, reigning Porsche PAYCE Carrera Cup Australia Champion, Jordan Love, would achieve his best ever result for the Fach Auto Tech team.

The young Australian put together an excellent drive from 14th on the grid to finish in eighth position. “I’m happy with that result,” the 21-year-old said. “I made up three places on the first lap, and that was a great foundation for my maiden top 10 finish and the third in the Rookie class.”

After three races within three weeks, the Porsche Mobil 1 Supercup now takes a break before round four takes off as support to the British Grand Prix at Silverstone from 30 July to 2 August.

Third race, third polesitter – Dylan Pereira secured the best grid spot for the Porsche Mobil 1 Supercup round at the Hungaroring. For the first time this season, the Luxembourger starts from first place. In cool and dry weather conditions, he was almost three-tenths of a second faster in the qualifying session than Porsche Junior Ayhancan Güven (TR/Martinet by Alméras). By contrast, the next three-tenths of a second were shared by four drivers. “I got a perfect free run,” said Pereira (BWT Lechner Racing), explaining his unusually large advantage by Supercup standards.

Güven, the polesitter of the previous race at Austria’s Red Bull Ring, was content with position two. “Starting from the first row of the grid is very important at the Hungaroring. I’ve achieved that goal. If it rains on Sunday, the cards will be reshuffled anyway.” The two rookies Marvin Klein (F/Martinet by Alméras) and Leon Köhler (D/Lechner Racing Middle East), as well as Larry ten Voorde (NL/Team GP Elite), qualified behind Güven. The sixth grid position is occupied by Jaxon Evans (NZ/BWT Lechner Racing). The second Porsche Junior scored pole position at the season opener on the Red Bull Ring. The fastest driver in the ProAm classification was Roar Lindland (N/Pierre Martinet by Alméras) on 13th.

Dylan Pereira dominated the qualifying right from the outset. Already at his first attempt at pole position, the current series leader was significantly faster than his rivals. “I still had reserves and knew that I had room for improvement,” he reported. As usual, Pereira returned to the pits about halfway through the 30-minute session to get a fresh set of slicks and have the suspension tweaked. “I wanted the rear axle to be less twitchy so that the tyres didn’t overheat and could function perfectly over two laps.” His plan worked, and the No. 2 Porsche 911 GT3 Cup lapped the 4.381-kilometre racetrack faster than all others twice.

“The second attempt is normally faster than the first because a lot of rubber is left on the track, which gives the asphalt better grip,” explains Pereira. Although Formula 1 and other racing series have been practicing on the Grand Prix circuit just outside Budapest since Friday, only the Porsche Mobil 1 Supercup uses Michelin tyres. “That might sound strange, but the tyre rubber from other racing series doesn’t give us much of an advantage,” reveals Dylan Pereira. He has one wish for Sunday’s race, which starts at 12:30 p.m. local time: “I didn’t do as well in the rainy practice on Friday, so I’m hoping for dry weather.”

Three rounds within three weeks – the Porsche Mobil 1 Supercup races now come thick and fast. After the two events at Austria’s Red Bull Ring, the 25 Porsche 911 GT3 Cup will compete as part of the Hungarian Grand Prix this coming weekend (17 to 19 July).

“Overtaking on the Hungaroring is difficult – for us and also the Formula-1-drivers. For this reason, a decent grid position is critical,” says series leader Dylan Pereira (L/BWT Lechner Racing). “Still, for us drivers, the Grand Prix circuit in Hungary is more challenging than the Red Bull Ring. I think there’ll be a balance of power reshuffle in the Porsche Mobil 1 Supercup,” adds Porsche Junior Ayhancan Güven (TR/Martinet by Alméras).

#PorscheMobil1Supercup – After two back-to-back races @redbullring in #Spielberg, the @PorscheSupercup travels to Hungary, where the third round of the season will be held @HungaroringF1 near Budapest next weekend #Porsche #911GT3Cup @Mobil1 pic.twitter.com/4ZWoc2KbCg