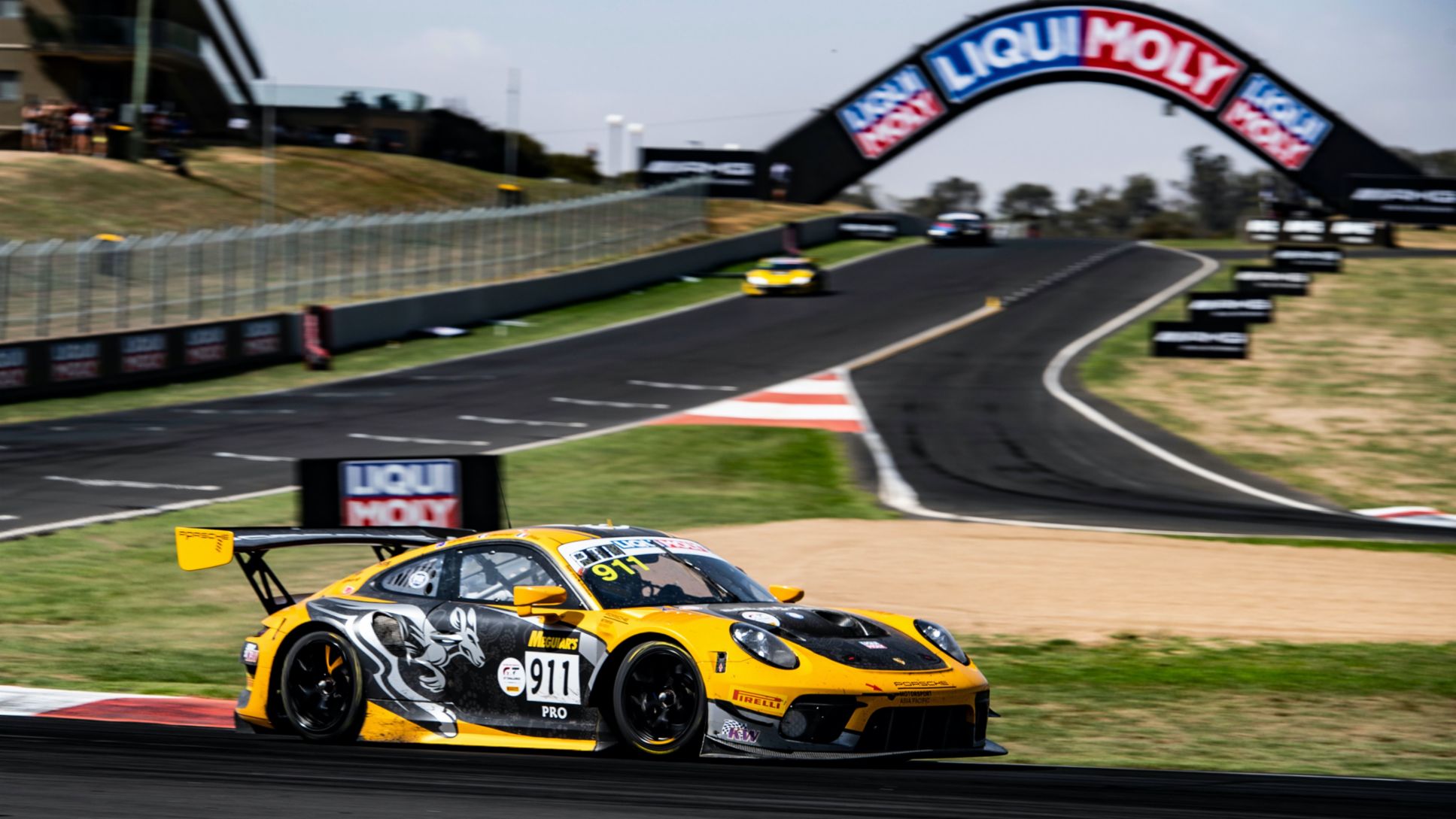 At the season opening round of the Intercontinental GT Challenge at Bathurst, Absolute Racing finished on fourth place as the best Porsche customer team. The three Porsche works drivers Matt Campbell, Mathieu Jaminet and Patrick Pilet shared driving duties in the Porsche 911 GT3 R with the starting number 911.

Three more identical nine-eleven racers finished the 12-hour race in Australia in the top ten on Sunday. Porsche achieved a one-two in the Pro-Am class, with Grove Racing winning ahead of the NED Racing Team.

The many safety car phases turned the long-distance classic on the Mount Panorama Circuit into a turbulent race, with the interruptions causing the field to bunch up several times. Last year’s winner Campbell took up the race on home turf from pole position. Over long stretches, the Porsche 911 GT3 R ran amongst the leading pack. However, tyre damage in lap 117 relegated the No. 911 entry down a lap. Thanks to a clever pit stop strategy, the team was able to make up lost ground during a safety car phase. In the end, the gap to the podium was just 1.529 seconds after 314 laps.

The second vehicle run by Absolute Racing with the starting number 912 took the chequered flag in seventh. The driver of the final stint and Porsche Young Professional Thomas Preining (Australia) shared the vehicle with Porsche works driver Dirk Werner (Germany) and Matteo Cairoli (Italy). Porsche works driver Laurens Vanthoor crossed the finish line two positions behind them. The Belgian was joined in the cockpit of the No. 1 car fielded by EBM (Earl Bamber Motorsport) by his works driver teammate Earl Bamber (New Zealand) and the Australian motor racing legend Craig Lowndes. At the start of the race, the squad fought for the front spots on the 6.213-kilometre racetrack, however a time-consuming change of the brake pads prevented them from achieving a top result.

Fritz Enzinger (Vice President Porsche Motorsport and Group Motorsport Volkswagen AG): “Grove Racing’s victory in the Pro-Am class is really great. All five of our Porsche 911 GT3 R finished in the top eleven. After claiming pole position, we thought we could possibly win. But the field was very evenly matched. As the group representative for Volkswagen Motorsport, I’m of course delighted with Bentley’s win.”

Pascal Zurlinden (Director Factory Motorsport): “It wasn’t a great race in the pro-category. We had problems with the tyres and brakes. But the drivers and teams fought their way through and made the best of the situation. As such, everyone can go home with their heads held high. For our long-standing customer team Grove Racing, I’m absolutely thrilled about their huge success in the Pro-Am class.”

Sebastian Golz (Project Manager Porsche 911 GT3 R): “We have five cars in the top eleven, a class win and a second place in the Pro-Am category. All in all, that result doesn’t sound too bad, but we just didn’t quite pull it all together against the competition today. Because of the punctures, brake problems and penalties we couldn’t make the most of the potential that was available to us.”

Mathieu Jaminet (Porsche 911 GT3 R #911): “All things considered, it was a tough race for us. We had two punctures that threw us back. We lost a lap but we battled hard to get back up into the action. Towards the end we hoped for the predicted rain, but unfortunately it arrived only after the chequered flag came out.”

Earl Bamber (#1 Porsche 911 GT3 R): “We had a good car with an ideal setup, but unfortunately there was a problem with the brake pads in the middle of the race. We had to pit and that cost us two laps. We couldn’t recover from that. Afterwards we had one of the fastest cars, which showed our potential, but after our win here last year we had simply expected more.”

Dirk Werner (#912 Porsche 911 GT3 R): “Starting in the night at Bathurst is something special. However, starting from twelfth on the grid surrounded by so many vehicles makes it difficult to gain any positions at the start. We managed to work our way up the field and were in the top group for the last two hours. At the end we hoped for rain, perhaps then we might have achieved an even better result.”

Stephen Grove (#4 Porsche 911 GT3 R): “First place in the Pro-Am class is fantastic. Ben’s first stint was very important because it put us in a good position. We then fought our way through the field bit by bit. The secret here is that you have to be able to read the traffic on the track correctly. We tried to stay out of trouble and are grateful for a perfect car.”

Jaxon Evans (#12 Porsche 911 GT3 R): “We started from a little further down the grid than we’d originally planned. The name of the game early on was to get through the dark hours of the race without any damage. After that we were able to manoeuvre ourselves further up the order. I’m really pleased with second place and eleventh overall in the Pro-Am class for the NED Racing Team.”

You can find more comments about the race in the press release.

An ideal qualifying for the Porsche customer team Absolute Racing at the opening round of this year’s Intercontinental GT Challenge: Porsche works driver Matt Campbell turned the fastest lap of the day in qualifying for the Bathurst 12 Hour, thus handing Porsche its first pole position at the Mount Panorama Circuit. In the identical Porsche 911 GT3 R, Laurens Vanthoor (Belgium, No. 1) secured the fifth grid spot for Earl Bamber Motorsport (EBM) on Saturday.

Round two of the Intercontinental GT Challenge is held at Spa in Belgium. From 23 to 26 July, the most important championship for GT3 sports cars will be contested at the legendary 24-hour race in Belgium’s Ardennes region.