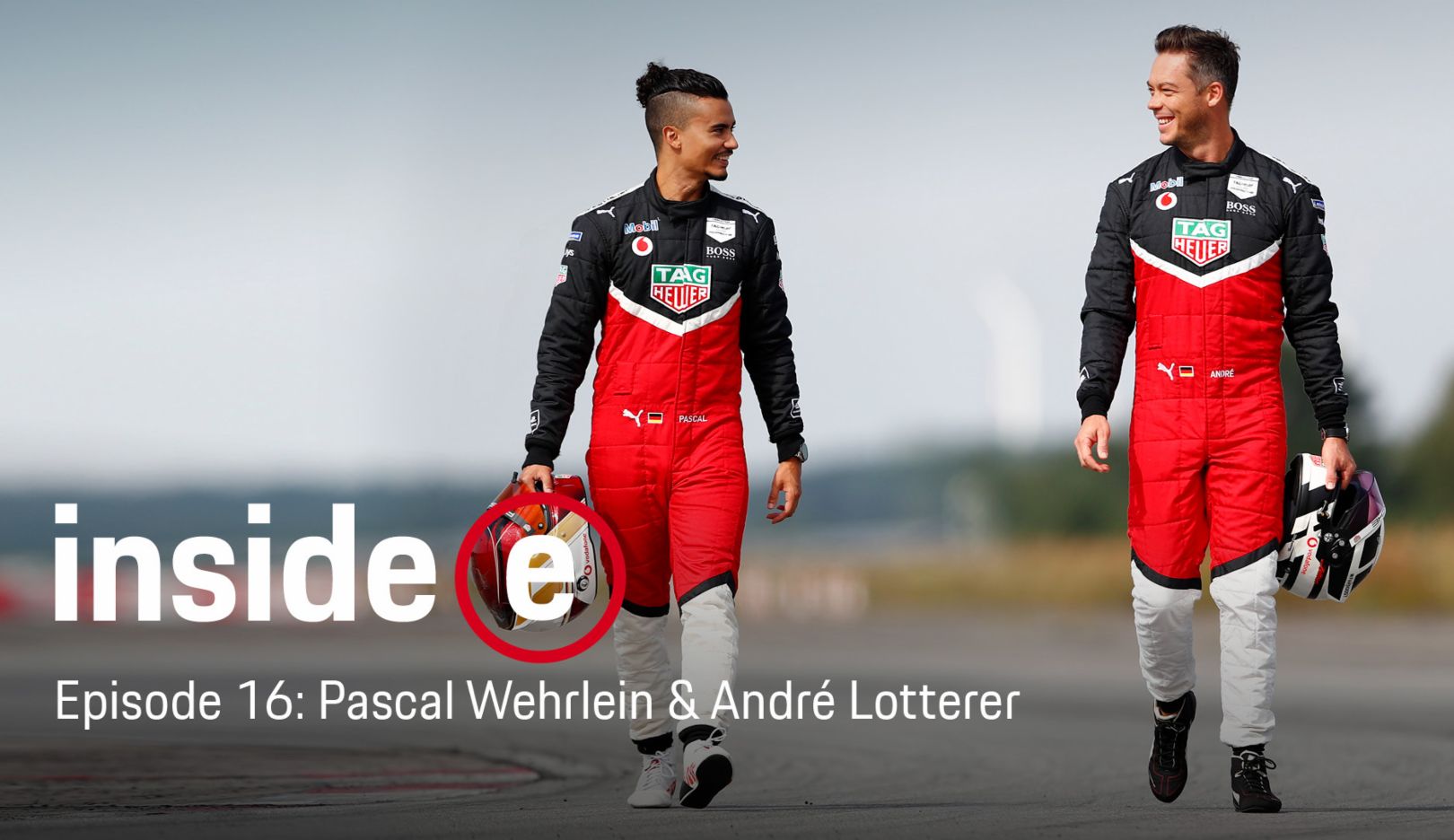 The final test drives are completed, the racing cars are on their way to South America. The TAG Heuer Formula E Team kicks off its second season in the ABB FIA Formula E World Championship in Santiago de Chile on 16/17 January. In the latest “Inside E” podcast, regular drivers André Lotterer (GER) and Pascal Wehrlein (GER) talk about preparations for the season opener, their impressions of the refined Porsche 99X Electric and how important teamwork is for success.

“We were able to complete our demanding test programme without any issues, were usually up there at the front and ended the first day with a best time – that is always a good sign,” was André Lotterer’s summary of the successful test drives at Valencia a good two weeks ago. The Porsche 99X Electric, with its new powertrain developed in Weissach, is not a totally new car, but balance and driveability in particular have been optimised further in quite a few areas. “It’s lots of little things that make a car faster,” said the seasoned driver, “and it’s precisely those that you need to discover.”

Pascal Wehrlein is unable to make that comparison. He is entering his first race season with Porsche, but it hasn’t taken him long to settle into the team well. “I have spent a lot of time in Weissach since August, been in the simulator and had extensive discussions with my engineers,” he recounted. “Even though I am already familiar with Formula E, I had to get used to a lot of new things because every team works differently. But the team made it very easy for me to get my bearings. I feel right at home at Porsche now.”

He sees having a colleague at his side with as much experience as André Lotterer does as a stroke of luck. “He knows the team really well and is great with the car set-up. I can learn a lot from him,” he said. He also sees teamwork as the key to success in Formula E. “We all want to win on race day. That’s normal. But until then we have to come together to the point where we really are in the position of being able to drive for the win.”

“My last race was in March. I can’t wait to get back to racing mode.” Pascal Wehrlein

The pre-season preparations are keeping the Porsche drivers extremely busy. They will be spending a lot of time in Weissach before flying to Santiago de Chile, to ensure, through close collaboration with the engineers, that all the experience and test data is used in the simulation. But before that they are looking forward to a peaceful Christmas-time with their families. Pascal Wehrlein is hosting his parents, and will be preparing raclette and fondue for them. In addition to plenty of walks with his dog, André Lotterer has a very special task, “I have to play Santa Claus for my little nephews.”

Then, after the holidays it’s all about the start of the season in Chile. “My last race was in March. I can’t wait to get back to racing mode,” said Wehrlein. And Lotterer is also “very happy” to be racing again. “It’s not guaranteed at this difficult time,” he added, “which is why I am grateful to everyone who is making it possible.”

The Porsche Formula E podcast is produced in English and is now available in the Porsche Newsroom. “Inside E” is also available on other platforms such as Apple Podcasts, Spotify and Google Podcasts.

The Porsche Formula E Podcast is published in English and is now available in the Porsche Newsroom. Inside E" is also available on other platforms such as Apple Podcasts, Spotify and Google Podcasts.

“Inside E” Episode 16: Interview with Pascal Wehrlein and André Lotterer

In the latest “Inside E” podcast, Amiel Lindesay, Head of Operations Formula E, reveals how much the team and drivers are looking forward to the start of the season, why cancelling the races in Chile was the right decision, and how confident everyone involved is that they can meet the higher expectations.

In the latest “Inside E” podcast, pit lane reporter Nicki Shields and commentator Jack Nicholls talk about their work on the official global TV broadcasting of the ABB FIA Formula E World Championship.

The TAG Heuer Porsche Formula E Team has been at the Circuit Ricardo Tormo near Valencia this week, where it successfully completed its final test ahead of the start of this season’s ABB FIA Formula E World Championship.

At the official test days for the ABB FIA Formula E World Championship at Valencia the countdown to the new season gets underway for the TAG Heuer Porsche Formula E Team.