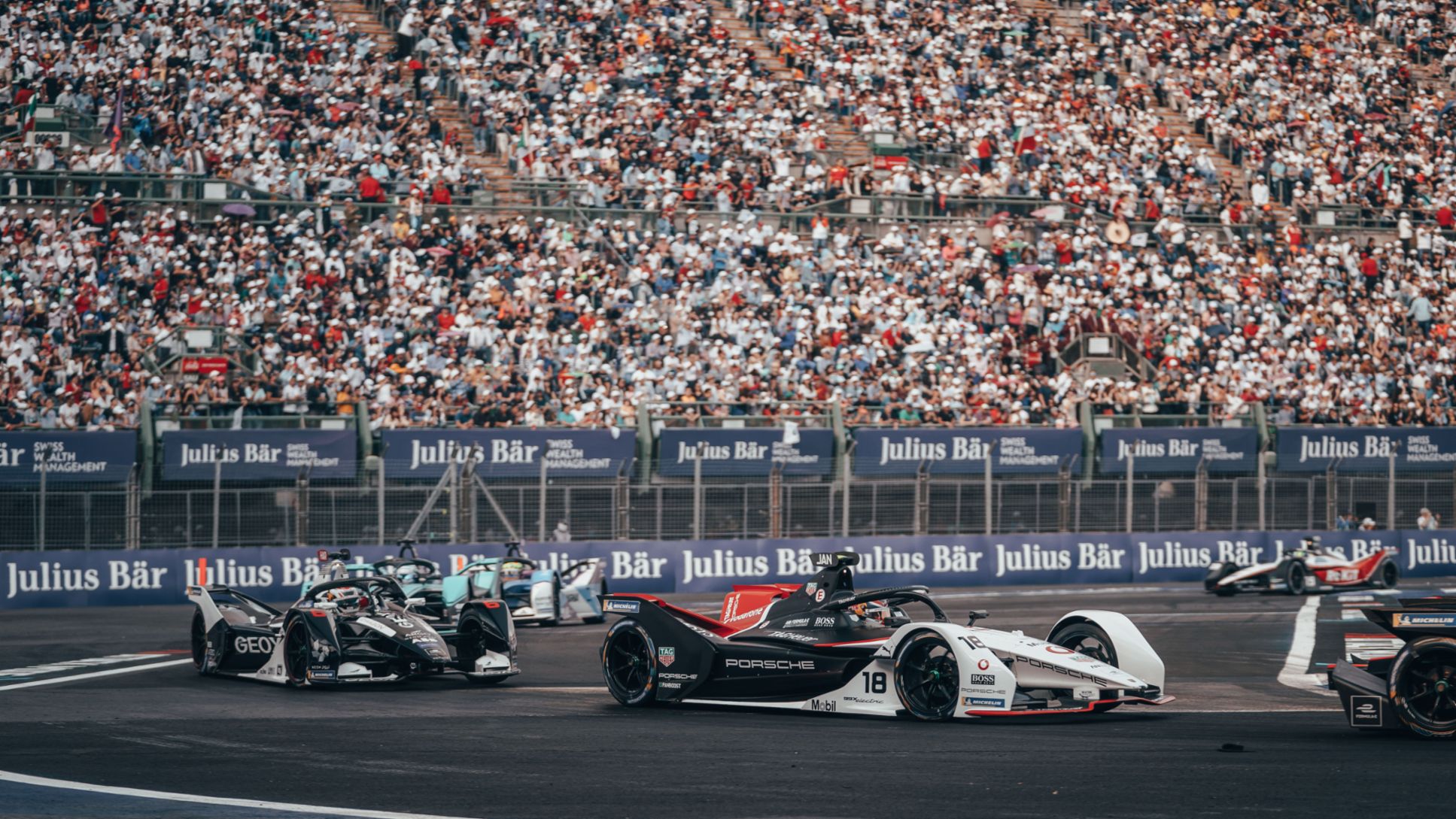 After the first pole position in its still brief history, the TAG Heuer Porsche Formula E Team missed out on a podium finish in the Mexico City E-Prix.

André Lotterer (DE) recorded the fastest lap in Super Pole to secure pole position at the fourth race of the ABB FIA Formula E Championship in Mexico City (MX) and claim another highlight for Porsche in the fully-electric race series. He scored three points in the drivers’ championship.

Lotterer did not, however, enjoy such good fortune in the race itself. After battling with wheelspin at the start, he lost three places after contact with eventual race winner Mitch Evans (Jaguar Racing, NZ) at the entry to turn one. Further battles caused severe damage to the bodywork of the Porsche 99X Electric, forcing him to retire from the race.

Neel Jani (CH) finished the race in 14th place in the #18 Porsche 99X Electric. The Swiss driver had secured 14th position on the grid in qualifying and was able to move up one place in the opening phase, before falling back after taking a drive-through penalty for a technical rule violation.

As was the case in the first two races of the season in Diriyah (SA), Lotterer was in the top five for the Fanboost voting but was unable to make use of the additional energy. Lotterer is in tenth place in the drivers’ standings, while Neel Jani is currently in 23rd position. After four races, the TAG Heuer Porsche Formula E Team is ninth in the team standings. The fifth race of the ABB FIA Formula E Championship 2019/2020 will take place on 29th February 2020 in Marrakesh (MA).

Reactions to the Mexico City E-Prix

Amiel Lindesay (Head of Operations Formula E): “That was another tough race for us. André was repeatedly involved in battles that severely damaged the car. We eventually had to withdraw the car from the race. A drive-through penalty was imposed on Neel after the safety car period. We will have to analyse the precise reason for this. Of course, we are disappointed with how the race went but we need to focus on the positive aspects of this weekend. The pole position and the pace of both drivers shows that we are really competitive.”

Neel Jani (Porsche 99X Electric, #18): “The start went well, even though I was on the dirty side of the track. After that, I was involved in a lot of battles and kept getting hit from in front and from behind. It’s a shame that I was later subjected to a drive-through penalty. Had that not been the case, a better result would certainly have been possible. I am happy that I was able to finish the race and gain some more experience. André’s pole position showed what the car is capable of. That gives us confidence for Marrakesh.”

André Lotterer (Porsche 99X Electric, #36): “Of course, that is not the result I had hoped for. I struggled with wheelspin at the start and then Mitch (Evans) hit me on the first corner. That lost me a few places. It was a tough race with plenty of incidents. After so many collisions, my car was so badly damaged that I had to retire. I will go back on the attack in Marrakesh.”

The TAG Heuer Porsche Formula E Team travels to the next round of the 2019/2020 ABB FIA Formula E Championship full of optimism and with a clear goal: The team is looking to get back in the points with the Porsche 99X Electric at the Mexico City E-Prix. The race takes place on sections of the iconic “Autódromo Hermanos Rodríguez” and climbs to a full 2,250 metres above sea level, making the E-Prix in Mexico City the highest race on the Formula E calendar.

In Santiago, you missed out on the Super Pole by just 0.15 seconds. Can you make it into the top six in qualifying in Mexico?

“Qualifying in Santiago showed us that we have the potential to make it into the Super Pole. I am learning with every qualifying session and every race. I would obviously like to take another step forward in Mexico. It would be nice to get both cars into the Super Pole. As the track has more grip than other Formula E circuits, the conditions will presumably be similar for all four qualifying groups, meaning everyone will have equal opportunity.”

You have driven at the “Autódromo Hermanos Rodríguez” a few times during your time in LMP1 – but on the regular circuit. What is your impression of this year’s Formula E layout, and what are your goals for the race?

“Compared to my previous races at this circuit, the Formula E layout only features two of the same corners. Generally speaking, the track is not your typical Formula E circuit, but it is rather more familiar territory for me: You have more grip and there are no bumps. It is reminiscent of classic racetracks. It is a very fast circuit with long straights and sweeping corners, which will significantly affect energy management. The temperatures also play a major role there. They affect both the tyres and battery management. Generally speaking, we travel to Mexico in a positive frame of mind. The fans always make us very welcome in Formula E, and it is great fun to race in front of the crowds. We want to exploit our potential at the Mexico City E-Prix.”

The layout of the Formula E circuit has changed dramatically this year. What is new?

“Generally speaking, the circuit is much faster. Two sections are key: The first sector is completely different to last year and the final turn no longer has a chicane. You will not find a longer right-hander at any other Formula E circuit. That will pose a challenge when it comes to tyre temperature, particularly for the rear-left tyre. It will be interesting to see how this factor affects tyre management.”

What are your expectations ahead of the Mexico City E-Prix?

“It is hard to say what awaits us in Mexico. In principle, we want to finish in the points with both cars. The circuit is more or less new to everyone, which is a good thing for us. It means we are not at a disadvantage compared to the other teams. And it is more of a traditional racetrack, which means the field will presumably be close together. The layout means you must be economical with your energy management, which will be a deciding factor. The Mexico City E-Prix is always a great race. The Mexican fans are very enthusiastic. When you drive through the stadium, you can hear the crowds in the grandstands. That is what makes this E-Prix so special.”

What has the team learned from the previous E-Prix in Diriyah and Santiago, which is relevant to the Mexico City E-Prix?

“We took what we learned in Diriyah and put it into practice in Santiago, where we were better prepared. The race obviously did not go entirely to plan. However, we did make progress, which gives us cause for optimism. It is important to keep learning all the time and to maintain our positive mindset. The learning curve remains a steep one. That goes for the coming E-Prix and all the remaining races. The team is well prepared and will push hard again at the Mexico City E-Prix.”

Does the team have an advantage in that certain sections of the track are familiar from its time in LMP1?

“That is an easy question to answer: No. Formula E is totally different to any other motorsport series, which means we cannot really use what we learned in the LMP1 races. The circuit has also been specially adapted. Generally speaking, we like the new layout, which has far faster corners and is longer than last season. We are really looking forward to lining up at the Mexico City E-Prix with the two Porsche 99X Electric.”

Everything you need to know about the Mexico City E-Prix

Mexico City hosts round four of the 2019/2020 ABB FIA Formula E Championship. There is a short functional test (Shakedown) on the eve of the race (14th February). Race day (15th February) starts with two free practice sessions. The first lasts 45 minutes, the second 30 minutes. In qualifying, the drivers are divided into four groups of six, based on the standings in the Drivers’ Championship. André Lotterer is currently ninth, so starts in group 2. Neel Jani, in 23rd place, goes in group 4. The drivers each have six minutes to set the best possible lap time. The fastest six drivers across all the groups then qualify for the 20-minute Super Pole. This decides who will start the race from the first, second and third row of the grid. The race lasts 45 minutes plus one lap.

The Mexico City E-Prix is held on sections of the “Autódromo Hermanos Rodríguez”. The 2.606-km circuit has been adapted for this year’s Formula E race and features long, fast corners, as well as some narrow sections. The final sector takes the drivers through the “Foro Sol Stadium”, which is known for its unique atmosphere.

Qualifying and the Mexico City E-Prix will be broadcast live on Eurosport.