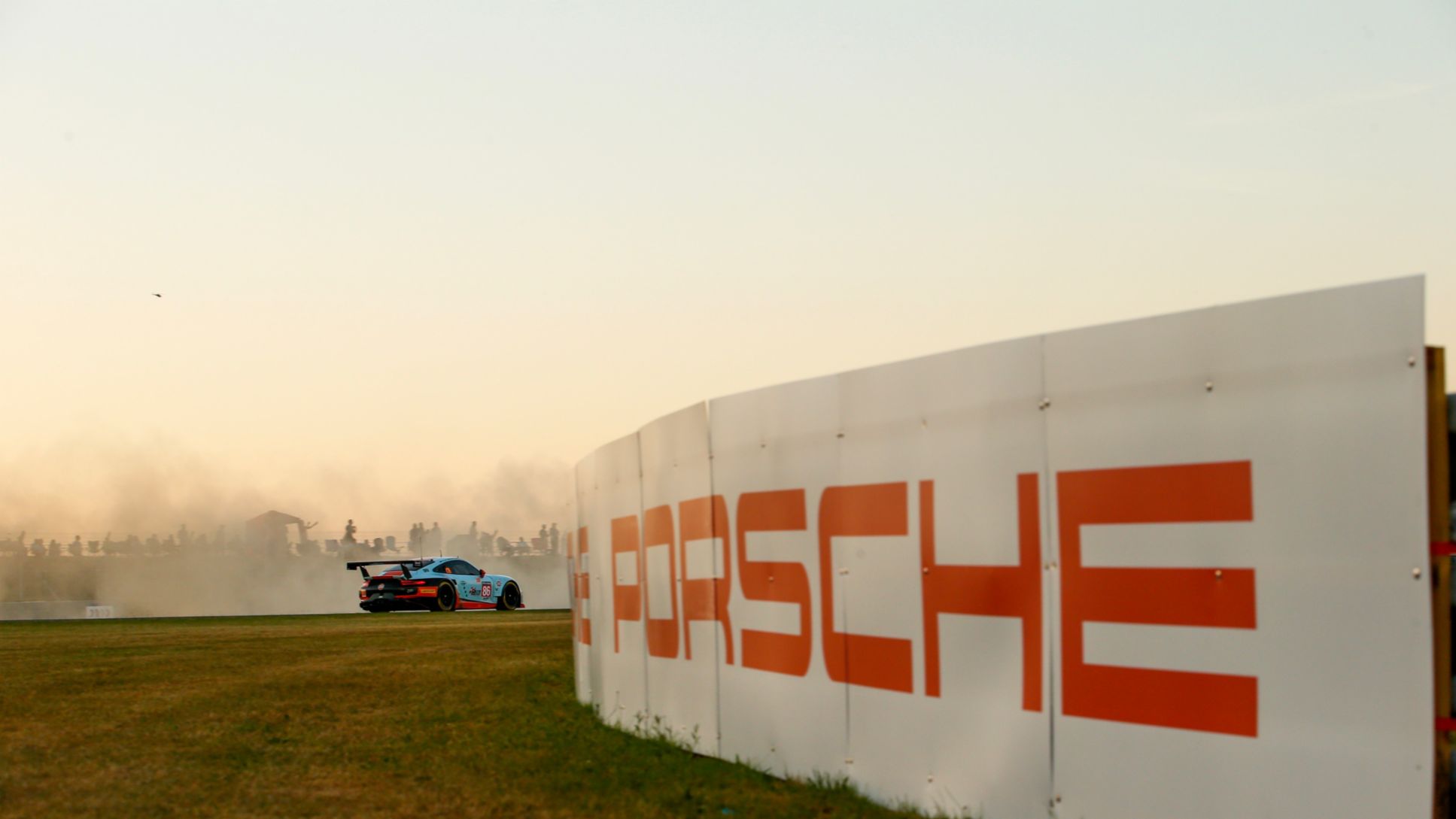 It’s race time: At more than 300 km/h, the Porsche 911 RSR hurtles down the D338 road from Le Mans towards Tours. In the two chicanes, which are closed off for everyday traffic and are a favourite spot for speed cameras, the ca. 515-hp GTE sports car takes the kerbs hard. Then, as fast as possible through the Mulsanne Corner and Indianapolis to the famous Arnage – the slowest passage of the 13.626-kilometre Circuit des 24 Heures. Exiting out of Arnage, the driver hits the throttle early, and now needs every ounce of courage and experience. In a few seconds, the Porsche Curves loom into sight. Five ultra-fast direction changes that are both loved and feared by drivers and represent the most spectacular section of the French endurance classic.

Le Mans is known around the world for its long straights and famous passages. Corners like Tertre Rouge and iconic features like the Dunlop Bridge get adrenalin pumping in the hearts of endurance fans. However, there is another section that features even higher on the spectators’ list of favourites: the Porsche Curves. Originally, only the long right-hander (Turn 23) after the Arnage curve was given the name Porsche. Now, this title also encompasses Virage du Pont, Esses du Karting and Virage Corvette. The flowing combination of two right-hand and three left-hand turns throws major challenges at teams and drivers – when it comes to downforce and grip, the racing cars reach their absolute limit.

“It’s definitely the most demanding passage at Le Mans – and it’s also the one that is the most fun for drivers,” says Jörg Bergmeister. The long-standing works driver and today’s Porsche brand ambassador scored a GTE-Am class win at Le Mans in 2019 with the Project 1 customer team. “Although the cars are set-up for low downforce for the long straights, we shoot through the curves doing over 200 km/h in the Porsche 911 RSR,” describes the tall German. The 1.029-kilometre stretch between track marshals 30 and 33 is over in a brisk 17.6 seconds. Despite constant cornering, the average speed lies at over 210 km/h. “We take the first right-hander in fourth gear, change up to fifth for the next two left-handers, then back down to fourth. It’s a real spectacle,” explains Bergmeister, who has contested 17 Le Mans races between 2002 and 2019.

“If you want to be fast over an entire lap at Le Mans, you have set a very fast pace on the long Mulsanne straight,” emphasises the Head of Operations Alexander Stehlig. “We aim to reach over 300 km/h on the straights. This makes overtaking easier, and that’s important at Le Mans. To do this, the Porsche 911 RSR – like all other cars – is trimmed for very low drag. This means little downforce. It’s a dilemma, because we actually need maximum downforce, particularly in the fast Porsche Curves,” states the engineer. Why is the setup not adjusted to the requirements of the fast corners? The potential lap-time gain would never be able to offset the disadvantages of a slower pace on the long straights.

In the five curves, the speed fluctuates within the narrow range of 189 to 228 km/h. In each curve, the centrifugal forces reach 2.29 to 2.42 g. Other data also underscores just how fast the Porsche Curves are: The good one-kilometre-long stretch makes up 7.5 per cent of the entire lap. It takes the 911 RSR just 17.6 seconds to get through the five-curve combination at speed – which translates to around four per cent of the entire lap time, or an average of around 3:50 minutes for the GTE-Pro racers. In keeping with the name of this spectacular passage, speed is the trump card. Under normal conditions, the best place for fans to watch the action is from the nearby ferris wheel. “From that vantage point, everyone can see that it’s not simply about gentle sweeps. The Porsche Curves are tight, you experience brutal g-forces. From the cockpit, the barriers, which are often very close to the track, make the legendary passage look even faster. It’s a dream for real racers,” enthuses Bergmeister.

“For me, driving through the Porsche Curves is like dancing with the car,” Gianmaria Bruni says about his experience. The works driver from Italy knows exactly how to master the world-famous passage at the absolute limit. In 2018, Bruni turned a sen-sational lap on the way to pole position. At the wheel of the Porsche 911 RSR, he lapped the 13.626-kilometre circuit in just 3:47.504 minutes – and promptly set a rec-ord for GTE vehicles. “When something like that works and you cover this part of the racetrack with its five corners in just 17.3 seconds, it’s hugely satisfying for us drivers. For me, there’s hardly a better feeling,” explains the three-time Le Mans class winner. “It only happens when everything comes together perfectly: Fresh tyres in the optimal operating window, ideal wind direction and no overtaking traffic in the Porsche Curves,” adds the Monaco resident.

As soon as two vehicles meet in the fast passage, time will be lost. “When you encounter a slower car, it’s hard to get past. If it’s a prototype that overtakes you, down-force is lost for a moment, you get annoying understeer and at least two-tenths of a second go down the drain,” says Bruni. Since the vehicle has to be perfectly balanced through the Porsche Curves, understeer costs speed. Completely reliable turn-in is essential for the swift changes in direction at over 200 km/h – for safety reasons, as well. “The barriers and run-off zones were changed again and again in recent years, but the basic characteristics have remained almost the same. The Porsche Curves represent an old-school passage,” emphasises Jörg Bergmeister. “Which means, even with sealed run-off zones and the SAFER barriers, sliding off the track there will very probably result in a write-off. Therefore, a controlled attack is the key to the Porsche Curves.”

Porsche Motorsport and Team Penske have agreed to collaborate closely in fielding the new LMDh vehicle commencing in 2023.

WEC: Porsche wins the WEC season opener in the Ardennes

The Porsche works team sends two 911 RSR to tackle the opening round of the FIA World Endurance Championship WEC at Spa-Francorchamps on 1 May. The successful team of the Stuttgart sports car manufacturer faces unique conditions in Belgium’s Ardennes region.