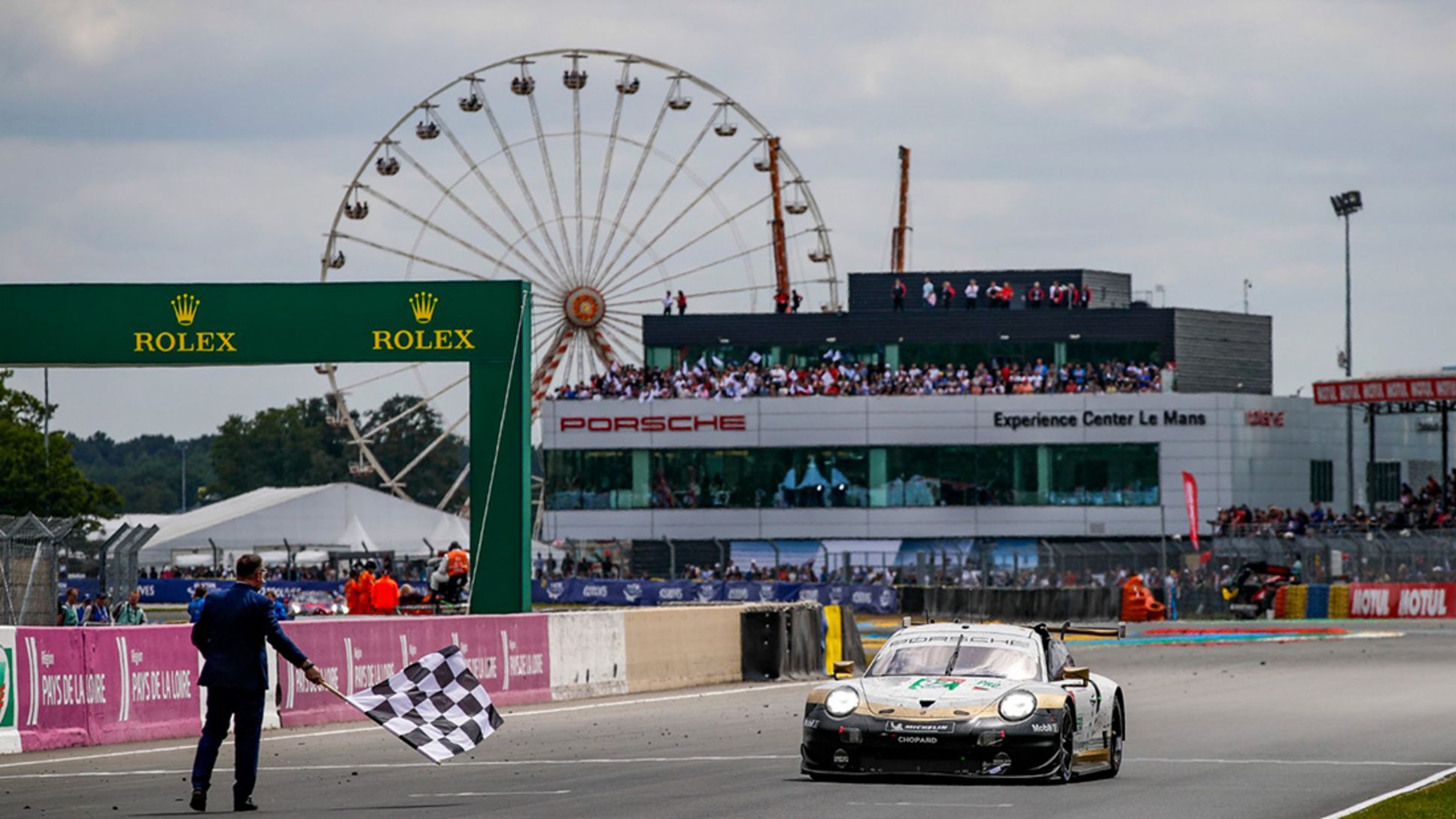 Fans of endurance racing have rarely had so much time to look forward to the 24 Hours of Le Mans as they have this year. Due to the coronavirus pandemic, the French classic was moved from its traditional mid-June date to 19/20 September.

There has only been one other delayed start in the almost 100-year history of the race: in 1968, the Le Mans 24-hour race was contested on 28/29 September due to ongoing unrest in Paris. The postponement of the race also affects the Porsche GT Team. This includes changes to the schedule as well as the waiving of popular fan events such as the technical scrutineering in the town square and the drivers’ parade the day before the start.

In mid-June around the summer solstice (20 June), the days are longest in the northern hemisphere. On the originally planned date for the 88th edition of the endurance race on 13/14 June, the vehicles would have driven in darkness for only 8.02 hours. On the new September date, the sun will set on Saturday evening at 20:01. The first rays of light will appear on Sunday morning at 07:44 – which means that the period of darkness is almost four hours longer than it would have been shortly before the official start of summer. In the fight twice around the clock on the Circuit des 24 Heures, teams will spend only around 12 hours in daylight.

The long night means a longer period with cooler asphalt and air temperatures. As a result, the engines of the two ca. 515-hp Porsche 911 RSR can run longer at an optimal level. Cooler air means more oxygen saturation and thus better and more efficient burning of fuel in the six combustion chambers. A good rule of thumb: if the ambient temperature drops by five degrees Celsius, the output of the engine increases by one per cent. Hence, in the long night of the 2020 Le Mans 24 Hours, a higher average pace can be achieved in the race.

With the sun setting earlier on Saturday evening and rising later on Sunday, temperature profiles will be different. The average temperature over a 24-hour period in mid-June (according to data from the last 30 years) is 16.8 degrees Celsius. The September average is exactly one degree lower. Like the higher oxygenation, this factor further influences the vehicles’ performance.

The cooler night-time temperatures also have the advantage that the soft compound of the Michelin tyres can be run over longer periods. This rubber not only offers more grip but also more consistency when track conditions are good.

“Unfortunately, we’re not permitted to drive triple or quadruple stints in the GTE-Pro class,” explains Zurlinden. After two stints, the GTE vehicles must be fitted with new wheels.

“The changed regulations no longer allow refuelling at the same time as a tyre change, and every tyre change costs additional time. We’ll definitely see more double stints. That’s why we have to keep our pit stops as short as possible,” says the experienced engineer.

The weather statistics over the last three decades show that the highest and lowest temperatures during the day and night hardly differ between June and September. However, the data also clearly shows that although there is less rain in September, the showers are heavier than in June. “We just have to take it as it comes,” says Zurlinden.

At the endurance classic, however, there is an old saying: it always rains at Le Mans. The big question is, at what stage during the race?

“The possibility of rain plays an important role in the teams’ tactics – especially if the car isn’t 100 per cent competitive in the dry. In the wet, the cards are reshuffled – and that opens up new opportunities,” explains Zurlinden.

During dusk and dawn at the 24 Hours of Le Mans, drivers often have to contend with sunstrike. At sunset on Saturday evening, the light shining through the windscreen at a low angle can blind the drivers, especially in the Indianapolis and Arnage passages. At sunrise on Sunday morning, this phenomenon occurs in the famous Tertre Rouge.

“Our seasoned works drivers are very familiar with this problem. As the sun is generally lower in early autumn compared to the summer months, our boys will just have to squint a little more often. It’ll be okay. They’re professionals after all,” smiles the Frenchman.

Unlike in previous years, the 24 Hours of Le Mans in 2020 will start at 14:30 local time. One of the reasons for this is that the final stage of the Tour de France, the famous road cycling race, ends in Paris in the late afternoon of 20 September. To avoid a clash with this event, the 88th edition of the long-distance motor race – part of the FIA World Endurance Championship (WEC) – will finish on Sunday at the earlier time of 14:30. “From the outside, this slight adjustment may seem insignificant but it has a major impact on our team. We have to finish our preparations even earlier for the start on Saturday. This means shorter breaks and even more stress,” outlines the Director of Porsche Motorsport. That allows only four hours between the end of the warm-up and the start of the race to complete the final preparations.

For motor racing fans, the 24 Hours of Le Mans event is high on the list of favourites. Every year, around a quarter of a million people flock to the track to watch the race. As a result, the capital of the French Departement Sarthe, with its 150,000 residents, bursts at the seams. But not this year: the organiser, ACO, has prohibited spectators at the racetrack.

“Fans always give us huge motivation,” says Zurlinden. The large grandstands opposite the pit lane are usually packed, especially at the start on Saturday and the finish on Sunday.

“When I look at the spectators from my gantry at the pit wall on Saturday and Sunday, I basically see the same faces. These euphoric fans always give me an additional boost when energy runs low after 24 hours. That’ll be different this year. Still, despite the restrictions, it’ll definitely be another great experience for the spectators watching from home.”

The official one-day pre-test, held a fortnight before the race, is a traditional part of the Le Mans 24-hour event. It is the one chance for manufacturers, tyre partners, teams and drivers to prepare for the unparalleled quirks of the 13.626-kilometre racetrack prior to the greatest classic of the year. The Circuit des 24 Heures is a combination of the permanent Circuit Bugatti and public roads. Such a setup is virtually unique in the motor racing scene. Moreover, there are no other chances to test on this circuit outside the race week.

“The elimination of the pre-test is a big challenge,” says Zurlinden. “This is the first time we’re fielding our latest 911 RSR there, so we have some unanswered questions about the setup. We would’ve liked to have done this work during a test so that we could analyse the results and arrive at the official sessions as well prepared as possible. We would also have preferred to check-out the handling of the tyres during test drives. Now we only have the practice sessions just before the race do to this work.”

This year’s 24 Hours of Le Mans deviates from the well-established time schedule. The practice sessions, which in the past were held alongside the qualifying on Wednesday and Thursday, are now scheduled for Thursday (ten hours free practice, plus qualifying) and Friday (free practice and hyperpole).

“The longer practice sessions allow us to do extensive work on the setup and tyre management,” explains Zurlinden. “We can complete a lot of tasks, but compared to the usual pre-test, we are disadvantaged in that the breaks are no longer sufficient to conduct a really detailed analysis.”

The Friday before the start of the race was always the last chance for drivers and team members to relax and catch their breath before the biggest race of the year. The so-called “Mad Friday” was normally all about the fans.

During the day, wildly souped-up cars roll through camping grounds and over thoroughfares lined with fans. Every burnout is greeted with thunderous applause. The “Le Mans holiday” on the Friday before the race traditionally ends with the famous drivers’ parade through the town centre. Not so in 2020: the spectacle with pilots driving classic cars from the Place des Jacobins to Place de la République has been cancelled.

“It’s a real shame for the fans, but there’s no other way around the restrictions required to contain the coronavirus. We’ll try to offer our passionate Le Mans fans the same gripping and spectacular programme via our social media channels,” says Zurlinden, explaining Porsche Motorsport’s plans.

Watery eyes, runny noses and medication are all familiar scenes in the Le Mans paddock in June: many drivers, team members and fans suffer from pollen allergies. In summer, the amount of grass pollen in the grain-growing Sarthe region in France is enormous.

“I’m one of those affected,” reports Zurlinden. “There’s no way around taking antihistamines in June but the medication makes you tired. And that’s definitely something you don’t want at a 24-hour race. In this respect, I’m certainly not the only one who is happy to work almost allergy-free at Le Mans in September.” 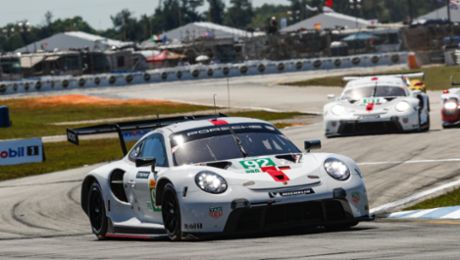