Darkness, low temperatures, low friction coefficients on the road – not quite the ideal conditions you’d want to drive a car in. A visit to the Porsche Experience in Levi, Finland shows why the Taycan doesn't lose out on performance in winter and in fact is even superior to combustion engines in terms of driving dynamics.

He spends fifteen weeks a year north of the Arctic Circle – and you can tell. Casually anticipating every imminent turn in the pitch dark forest, he manoeuvres the Taycan 4S with millimetre precision and accelerates with incredible force and at an even more incredible drift angle out of every bend.

Christian Wolfsried, Development Engineer Chassis Driving Dynamics – All-Wheel Development and Torque Vectoring, sits silently with full concentration behind the gently heated steering wheel of the ice-blue Taycan. It’s not that there's nothing to talk about: he simply knows that the experience is even more impressive that way – because you can’t hear anything.

Everything is silent. Totally silent. The snow towering metres above swallows every sound and the warming sunlight of the very short day – together with the bracing night-time temperatures – have turned the trees and bushes in the forest into bizarre ice sculptures. The Taycan dances almost in surreal style behind the gigantic cone of light of its LED matrix headlights through the Finnish fairytale woods, and only in the distance do you hear the groaning rumble of the tyres penetrate the double-glazed window panes as the tyres bite their way into the sheer ice at full throttle.

The birthplace of the Porsche Electric Sport Sound

“The completely different vehicle acoustics is certainly one of the most striking differences,” says Wolfsried, “which is why the idea for the Porsche Electric Sport Sound also arose out of the m-low tests. For the driver, intuition is closely linked to acoustic sensor technology. This is because we have always been accustomed to it in conventional vehicles. So the PESS is more than just an emotional gimmick: it offers a real benefit in demanding driving situations.”

More than just the acoustic feedback on driving status itself, the control of this feedback is a real bonus in the Taycan – and no other car can will be able to equal it soon. Whereas previously developers were only able to distribute drive torque between the axles, the electrical architecture and its two motors now enable them to actively control the torque for the first time. “The advantage offered by the two completely independently controllable motors on the axles is absolutely priceless. It’s like having four accelerator pedals,” says Wolfsried enthusiastically. “With the Taycan, you can drive at extreme drift angles without any problem because you can apply torque to the front axle when you need it without having the rear axle spinning due to a locked centre differential at the same time.”

The fact that the entire powertrain can be controlled even more precisely than in a comparable combustion engine is due to the immediate and instantaneous response of the electric motors.

“Nonetheless, the advantages of a mechanical connection – which in conventional all-wheel drive systems ensures maximum traction between the two axles via a multi-disc clutch – have to be achieved via software. For this purpose, the functionality was completely redeveloped and distributed among several control units in order to do justice to the very high dynamics of the motors,” explains Ingo Albers, Project Manager Chassis for the Taycan.

The pulse inverters with a response time of 2 ms enable a control speed which is up to five times as high as previous systems. In comparison with a 911 or Panamera on the ice, the Taycan does not require any acclimatisation time. The control strategies of the drive stayed the same as in the familiar PTM system – simply benefiting from the new possibilities.

The same applies to slip control. Just that here the advantages of direct speed and torque control are even greater: “By directly integrating the PSM into the control loop of the pulse inverters, the drive slip control can not only be implemented ten times faster than before but also more harmoniously than in conventional drives,” says Albers.

Porsche has also developed its own winter tyres for the Taycan so as to achieve the typical Porsche driving characteristics on winter roads, too. This is the only way to adapt tyre characteristics to the chassis and therefore to the requirements of the vehicle. “During development we paid particular attention to improving lateral guidance and vehicle balance on snow-covered roads,” explains Albers. “Optimisation of braking and traction response was also a focal point of our work.”

Porsche applied new strategies to thermal management, too, so as to ensure optimum adaptation of the car to all weather conditions. “With more than 300 different wiring states in the entire vehicle, the range here is significantly broader than in conventional vehicles,” says Bernd Propfe, who is involved in the series as project manager for the platforms. “The Taycan reacts intelligently to the driving style of the past 600 kilometres and conditions the battery and interior based on the planned route, outside temperature, humidity and solar radiation.”

The Taycan particularly demonstrates its advantages in winter

The lower performance of electric battery systems at low temperatures is due to the higher viscosity of the electrolyte. The resulting increased internal resistance of the battery results in a loss of performance. Porsche therefore not only preconditions the high-voltage battery when it comes into contact with the mains, it also overheats the cells to up to 28 degrees Celsius, depending on the outside temperature.

“This not only enables the Taycan to draw on its full performance at any time,” says Propfe. “In conjunction with the optional heat pump, the vehicle is also able to heat the interior while driving without having to use electricity from the HV battery for the purpose of electrical heating.” In this case, the thermal energy of the 650 kg battery is used intelligently as a warming buffer storage tank. The clever design of the battery box also ensures that as little heat as possible is dissipated from the battery to the environment.

Clearly, a lot of effort went into ensuring the Taycan was a real Porsche without compromise. But the finished vehicle is impressive in all disciplines – whether a summer road trip or an intense winter driving programme. The Taycan is hot. Especially on ice. 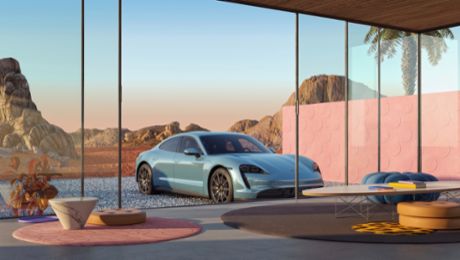 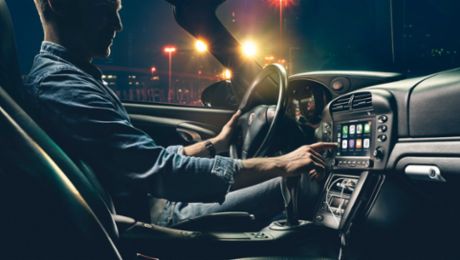