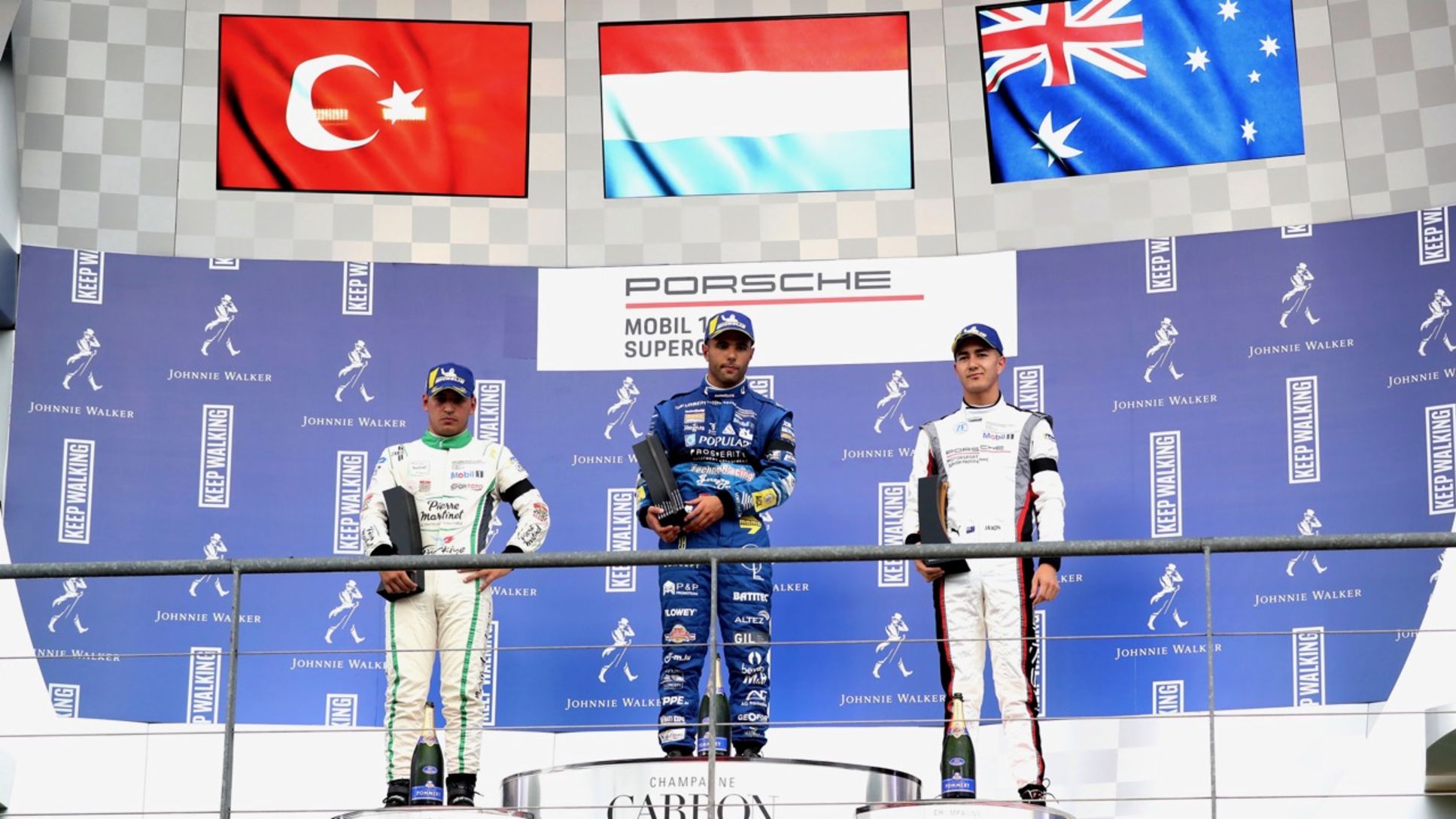 Dylan Pereira celebrated his second victory of the Porsche Mobil 1 Supercup season at the Circuit de Spa-Francorchamps in Belgium. On Sunday, the young racing driver won round seven of the international one-make cup ahead of Ayhancan Güven and Porsche Junior Jaxon Evans.

“As a Luxembourger, this was a home race for me. To win in front of my fans, partners and family feels fantastic. I made a slight mistake shortly before the end, but I managed to defend myself well from Ayhancan Güven,” said Pereira.

Over the entire eleven-lap race, Pereira led the field in his 485 hp Porsche 911 GT3 Cup. After the start, the 22-year-old initially pulled clear of his pursuers. Güven took up the race alongside Pereira on the first grid row, but had to fend off Evans when the lights went out. Over the course of the race, the Turkish rookie managed to shake Evans off and shorten the gap to Pereira. Shortly before the finish, spectators in the Formula 1 grandstands were treated to some gripping action: In the final lap, Güven made several attempts to snatch the lead from Pereira. The vehicles touched, but Pereira held strong and was the first over the finish line. “My third podium result so far this season is terrific. I put a lot of pressure on Dylan Pereira towards the end, but he defended himself brilliantly and deserved to win,” said Güven.

Porsche Junior Evans was delighted with his race, with the 22-year-old climbing the podium for the first time this season at the storied Belgian racetrack. “I’m really thrilled. My start was great and I managed to beat Larry ten Voorde in the sprint to the first corner,” declared Evans. Taking the flag behind the New Zealander were Larry ten Voorde (NL/MRS GT-Racing), Florian Latorre (F/Fach Auto Tech) and Tio Ellinas (CY/Momo Megatron Lechner Racing).

A three-way fight ensued for seventh place on the 7.004-kilometre circuit. Ultimately, Jaap van Lagen (NL/martinet by ALMÉRAS) prevailed followed by the reigning Supercup champion Michael Ammermüller (D/BWT Lechner Racing) and Porsche Junior Julien Andlauer (F/BWT Lechner Racing). “All in all it was a difficult weekend. The speed simply wasn’t there. In the race I concentrated on maintaining my position. Later, it got really intense amongst the midfielders,” stated Andlauer. Denmark’s Mikkel Pedersen (Dinamic Motorsport) rounded off the top ten finishers. In the ProAm class, Roar Lindland (pierre martinet by ALMÉRAS) secured victory for the seventh time this season. In this classification, the Norwegian beat Philipp Sager (A/Dinamic Motorsport) and Clement Mateu (F/pierre martinet by ALMÉRAS).

After round seven, the situation in the championship continues to be cutthroat. Porsche Junior Andlauer remains in the lead with 92 points, but is tied for points with his teammate Ammermüller. Both have won two rounds, but Andlauer has more second-place finishes to his credit. Third is occupied by Güven with 76 points. The youngster from Istanbul is also the best driver in the rookie classification. In the ProAm class, Lindland ranks first (120 points). For round eight of the season next week (6-8 September), the Porsche Mobil 1 Supercup travels to the north of Milan. Gianmarco Quaresmini is particularly looking forward to the race at the Royal Park of Monza. The 23-year-old Italian comes from Brescia and competes for Dinamic Motorsport, which is based in the Italian provincial capital Reggio Emilia.

Points standings after 7 of 10 races

First ever pole position in the Porsche Mobil 1 Supercup for Dylan Pereira: At the Circuit de Spa-Francorchamps in the Wallonia region of Belgium, the 22-year-old clocked the fastest qualifying time on Saturday. “For the last four years I’ve dreamed about the pole position in the Supercup. It makes me even happier that I succeeded on my favourite racetrack. I got my tyres to the optimal temperature and had hardly any traffic in front of me. The conditions were perfect,” said Pereira. Lining up alongside the Luxembourger on the first grid row is Ayhancan Güven. Larry ten Voorde planted his Porsche 911 GT3 Cup on position three.

Under blue skies and in temperatures of 28 degrees Celsius, Porsche Junior Jaxon Evans was the first to show top form: early in the qualifying session, the 22-year-old topped the time sheets on the 7.004-kilometre circuit. In a gripping final phase, however, Michael Ammermüller became the one to beat. The two-time Supercup champion remained at the top of the field until shortly before the end of the 30-minute session. Switching to fresh tyres, times tumbled amongst the 32-strong field, with one best lap turned after the other. First ten Voorde led the pack, followed by the rookie Güven. On his final hot lap, Pereira undercut both of his rivals with a time of 2:22.508 minutes, with the 22-year-old shaving 0.227 seconds off Güven’s effort. “In the last corner I lost a little time unfortunately. Still, second place is a great result for the race,” said Güven.

The best spot on the second grid row is occupied by ten Voorde. The Dutchman completed the Ardennes rollercoaster in a time of 2:22.744 minutes. “On my fastest lap I got slight oversteer in Eau Rouge. With a view to the championship, it’s a good starting position,” said ten Voorde. Porsche Junior Evans was satisfied with fourth place. “I wasn’t totally happy with the free practice, but I was considerably faster in the qualifying and I’m now looking forward to the race,” said the New Zealander. Ammermüller rounded off the top five.

Position six is occupied by Tio Ellinas ahead of Florian Latorre and Berkay Besler. The current leader of the championship, Porsche Junior Julien Andlauer, finished the qualifying on P9. “Unfortunately, that was one of my weakest qualifying performances this season. Just as my temperatures were at the ideal temperature I made several mistakes. We’ll now take a good look at how we can improve. Still, a lot is possible and every point counts towards the championship,” stated Andlauer. Lining up alongside him in tenth place is Jaap van Lagen. Pole position in the ProAm classification was secured by the Norwegian Roar Lindland.

Round seven of the Porsche Mobil 1 Supercup gets underway on Sunday at 12.30pm local time. Eurosport televises the race live in over 60 countries. Sky covers the international one-make cup in Great Britain and Italy, with Sport1 broadcasting in Germany. Fans can also watch the race live via the official Formula 1 streaming service (F1 TV). 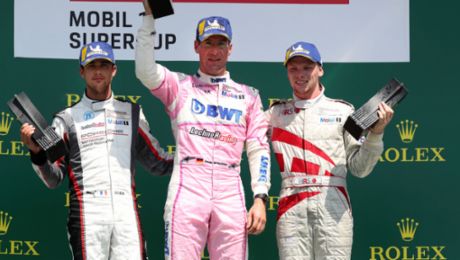 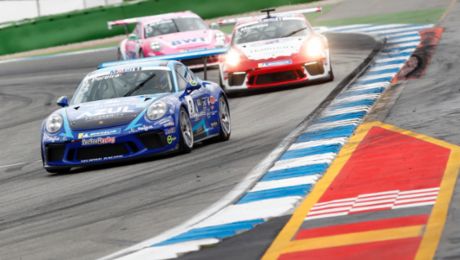 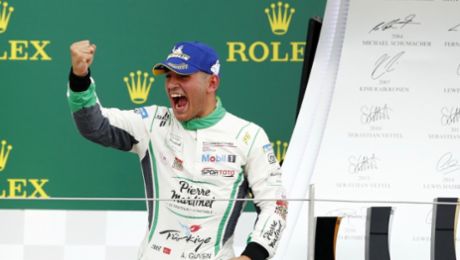