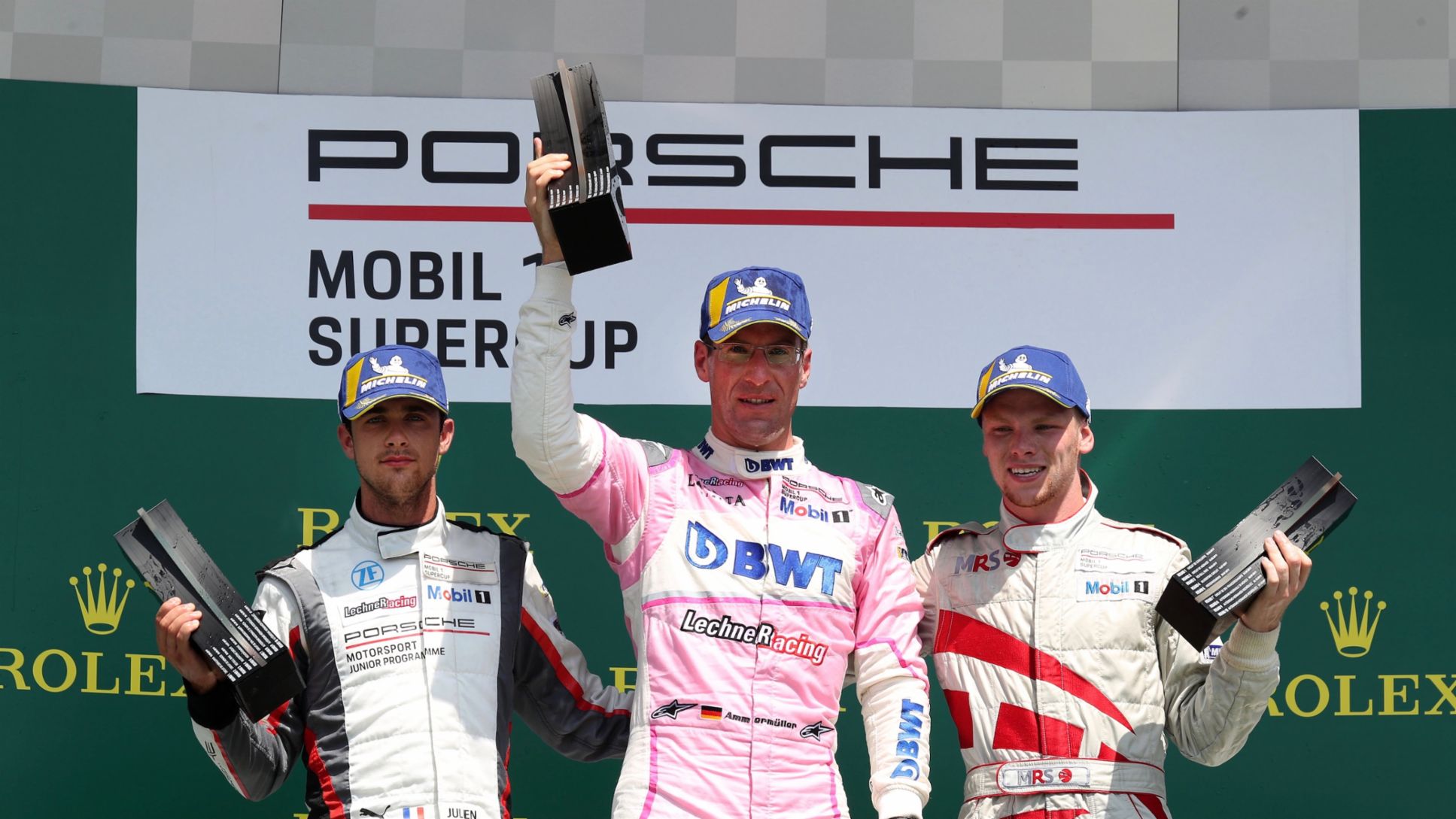 Michael Ammermüller celebrates his second win of the season in Budapest

The suspense in the Porsche Mobil 1 Supercup remains high: On Sunday, Michael Ammermüller won the sixth of ten races on the calendar of the international one-make cup.

With this, the German (BWT Lechner Racing) reduced the gap to the points’ leader and Porsche Junior Julien Andlauer (F/BWT Lechner Racing) to just one point. “At first, Julien Andlauer and I were at about the same speed. But then he made a couple of mistakes and I grabbed my chance. I’m particularly pleased that I could present our team boss Walter Lechner with such a gift for his 70th birthday,” said Ammermüller. Andlauer scored second place at the Hungaroring racetrack near Budapest ahead of Larry ten Voorde (NL/MRS GT-Racing) on third.

In temperatures of 24 degrees Celsius and sunshine, the 31 Porsche 911 GT3 Cup headed into the race. Andlauer initially defended his lead in the 485 hp vehicle, however a safety car was deployed shortly after the start which bunched the field together. The French Porsche Junior came under increasing pressure from his teammate. In lap seven, Ammermüller squeezed past the 20-year-old on the inside of the last corner of the track. The reigning Supercup champion then pulled clear of his pursuers to beat Andlauer across the line by 2.961 seconds. “The first laps were super and I could eke out a small advantage. Unfortunately I missed my braking point slightly in the third to last corner. Michael Ammermüller and I were side by side and I think I left him too much room. He then used that gap,” said Andlauer.

Behind the Lechner pair, four drivers battled for the remaining podium spot: Ten Voorde defended his position over the 15 laps to celebrate with champagne on the podium for the third time in a row. “I felt the pressure from behind, of course, but in such a situation you can’t lose your rhythm and you have to stay cool. I succeeded,” said ten Voorde. Tio Ellinas (CY/Momo Megatron Lechner Racing) occupied fourth place ahead of Dylan Pereira (L/Momo Megatron Lechner Racing) and Florian Latorre (F/Fach Auto Tech). Only 0.458 seconds separated the quartet at the flag. Securing seventh place, Gianmarco Quaresmini (I/Dinamic Motorsport) brought home his best result so far this season. Eighth over the line was rookie Ayhancan Güven (TR/martinet by ALMÉRAS).

The Porsche Junior Jaxon Evans (Fach Auto Tech) took up the race from 15th and worked his way through the order to lie in tenth. At the flag, the youngster from New Zealand finished on eleventh place. “Overtaking on this track is virtually impossible. That’s why my good start was so important. Unfortunately I made a mistake later which cost me a better result,” said Evans. Roar Lindland (pierre martinet by ALMÉRAS) drove to victory in the ProAm class. Thus, the Norwegian remains unbeaten in this championship category. Philipp Sager (A/Dinamic Motorsport) and Stephen Grove (AUS/Team Australia) came second and third in class.

After six races, Andlauer maintains his lead in the championship. With 85 points to his credit, he holds a one-point lead over Ammermüller. Ten Voorde ranks third overall with 62 points. The Porsche Mobil 1 Supercup now heads into a four-week summer break before the seventh round of the season takes off in Belgium’s Spa-Francorchamps from 30 August to 1 September. At 7.004 kilometres in length, the venerable Ardennes racetrack is the longest circuit on the Supercup calendar.

Porsche-Junior Julien Andlauer (BWT Lechner Racing) has achieved the perfect grid spot for round six of the Porsche Mobil 1 Supercup: During Saturday’s qualifying, the Frenchman secured pole position for the race on the Hungaroring near Budapest. “I actually encountered traffic over the whole session, so it certainly wasn’t easy. Position one is a particularly great result here, because overtaking on this racetrack is pretty tricky,” said Andlauer. Michael Ammermüller (D/BWT Lechner Racing) and Larry ten Voorde (NL/MRS GT-Racing) will take up the race from positions two and three in their Porsche 911 GT3 Cup racers.

During the hunt for top times on the circuit north of Barcelona, Andlauer topped the time sheets right at the beginning, with the 20-year-old posting the first top time after six minutes. Shortly afterwards, seasoned racer Ammermüller claimed the top spot, with Andlauer reasserting himself on P1 four minutes before the end of the 30-minute session after switching to fresh tyres. The Porsche-Junior lapped the racetrack in a time of 1:47.847 minutes. Tio Ellinas (Momo Megatron Lechner Racing) managed to undercut the pole-setting time, however the Cypriot turned his fastest lap under yellow in the third sector, thus his result was subsequently scratched. The qualifying had to be cancelled 55 seconds before the schedule end of the session as a vehicle had come to a standstill in the run-off zone of the last corner. Posting a time of 1:47.998 minutes, Ammermüller shares the front grid row with his teammate. “I was on course for pole when the yellow flag appeared and the race was stopped. That’s so annoying, because I definitely could have done better today,” said Ammermüller.

Porsche-Junior Jaxon Evans (Fach Auto Tech) concluded the qualifying session on 15th. “I’d expected a very different result of course. On my second set of tyres I was considerably faster, but unfortunately the race was then red-flagged. The best chance to make up some places is at the start of the race on Sunday,” said the New Zealander. Roar Lindland (pierre martinet by ALMÉRAS) achieved the top spot in the ProAm classification. The driver from Norway beat Stephen Grove (AUS/Team Australia) and Philipp Sager (A/Dinamic Motorsport).

Featuring many tight corners, the 4.381-kilometre-long Hungaroring offers very few chances to overtake. In the past two years, Ammermüller (2017) and the current Porsche Young Professional Thomas Preining (2018) won the race from pole position. Round six of the Porsche Mobil 1 Supercup takes off on Sunday at 12:40pm local time. Eurosport televises the race live in over 60 countries. Sky covers the international one-make cup in Great Britain and Italy, with Sport1 broadcasting in Germany. Fans can also watch the race live via the official Formula 1 streaming service (F1 TV). 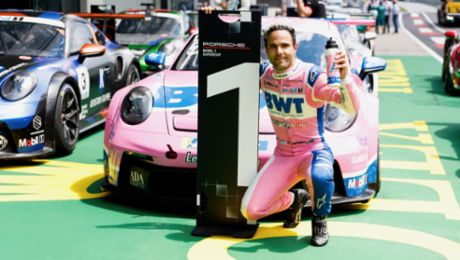