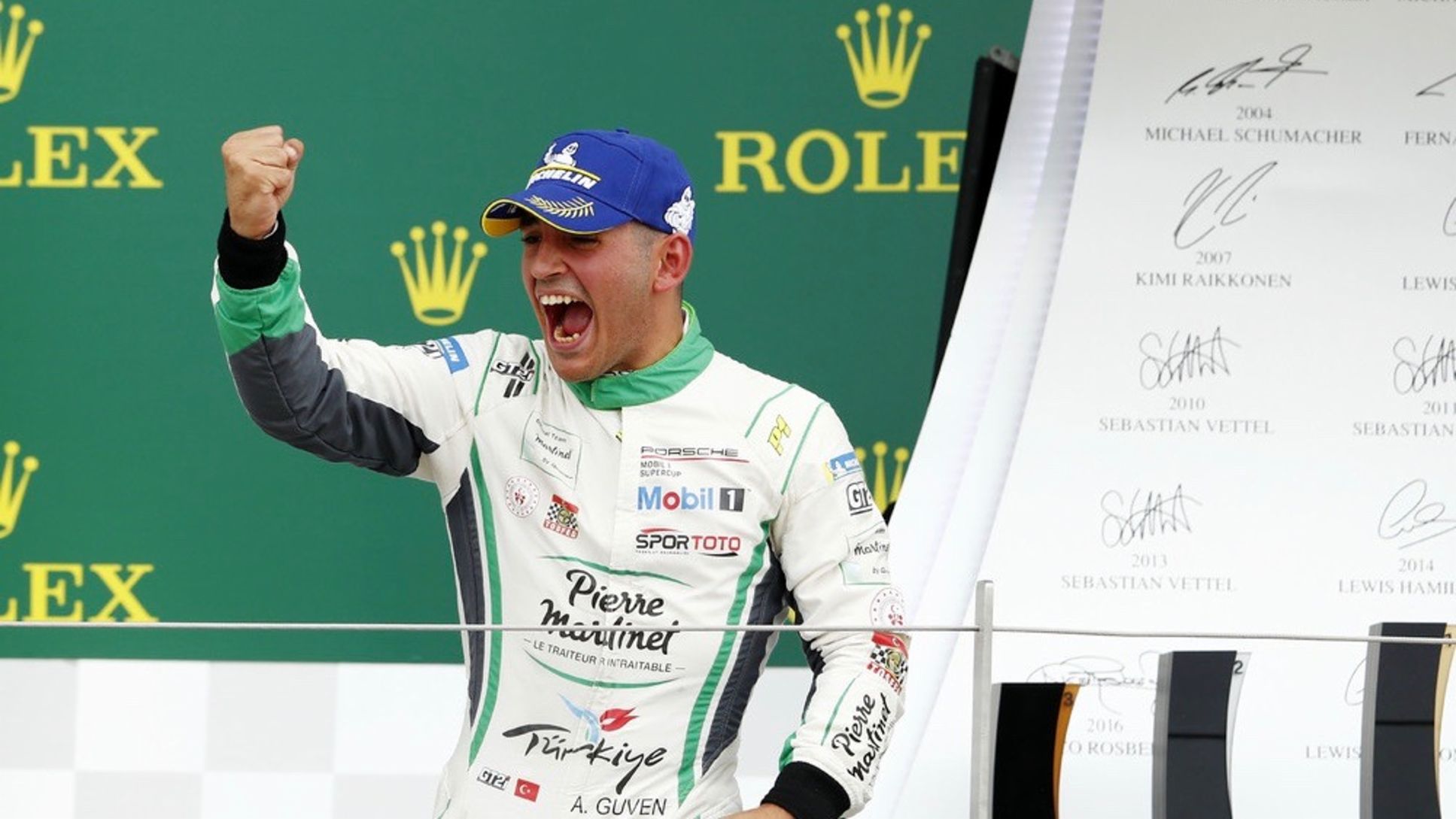 Huge celebrations for Ayhancan Güven: The Turk has won round four of the Porsche Mobil 1 Supercup at the Silverstone Circuit on Sunday. This marks the rookie’s first victory in the international one-make cup.

“Pole position on Saturday, victory on Sunday – I’m over the moon. After the start I managed to eke out a small advantage, which meant I didn’t have to risk too much when drizzle set in towards the end,” said Güven. Porsche Junior Julien Andlauer (BWT Lechner Racing) reached the flag in his 485 hp Porsche 911 GT3 Cup in second place ahead of his French compatriot Florian Latorre (Fach Auto Tech).

The race on the storied British circuit with its legendary corners Maggots, Beckets and Chapel was distinguished by many overtaking manoeuvres. In temperatures of 16 degrees Celsius, Güven led the field over the entire distance. After Porsche Young Professional Dennis Olsen (2017) and Latorre (2018), Güven is the third driver in a row to score his maiden Supercup win at Silverstone. Plenty of battles for positions played out behind the Turkish youngster – with Porsche Junior Andlauer overtaking four rivals to the delight of fans in the packed Formula 1 grandstands. Taking up the race from sixth on the grid, the 20-year-old worked his way up the ranks to third place. In lap nine, Andlauer slipped past Latorre to take second. “My starting position wasn’t ideal, but the vehicle was set up perfectly for this racetrack. Now I’m leading the championship – a perfect end to the weekend,” said Andlauer.

Latorre celebrated with champagne on the podium for the first time this season. “I finished in the top three here last year. This result makes me confident for the next races – I hope I’ll climb the podium more often this season,” said Latorre. Larry ten Voorde (NL/MRS GT-Racing) occupied position four. Porsche Junior Jaxon Evans (Fach Auto Tech) experienced a turbulent race. The New Zealand made a cracking start from third place, which propelled him right behind Güven. However, Evans came under increasing pressure and within four laps the 22-year-old was overtaken by Andlauer, Latorre and then ten Voorde. “After such a good start, fifth place is, of course, disappointing. I really wanted to finish on the podium, but unfortunately I made a few mistakes. Still, I’ll learn from them and hopefully demonstrate this at the next race,” stated Evans.

The VIP vehicle fielded by Porsche AG this weekend gave its season debut decked out in a new livery. At the wheel, Scottish cycling ace Chris Hoy finished on 28th. “I managed to overtake several cars after the start. When it started to rain in the last laps, I eased off a bit and couldn’t defend my position. Of course in front of so many fans, I wanted to bring the car home unscathed – and that’s what I did,” said the six-time Olympic gold medallist in track cycling. Roar Lindland (pierre martinet by ALMÉRAS) secured his fourth win so far this season in the ProAm class, with the Norwegian beating Stephen Grove (AUS/Team Australia) and Philipp Sager (A/Dinamic Motorsport).

After the Silverstone race, Andlauer now leads the championship. The young race driver from Lyon ranks first with 67 points ahead of Ammermüller and Güven. In the rookie classification, Güven occupies position one. Lindland is the best driver in the ProAm class.

Round five of the Porsche Mobil 1 Supercup will be contested on 26-28 July as support to the Formula 1 race at Hockenheim. In the history of the international one-make cup, nine German drivers have won their home race in the forested Hardtwald region in south-west Germany. As the only German contesting the entire season, Ammermüller is still waiting for a Supercup victory in front of home crowds.

Points standings after 4 of 10 races

“This is my first race weekend at Silverstone in my debut Supercup season – pole position is a truly surprising result. Of course my goal for Sunday is to win,” said Güven (martinet by ALMÉRAS), who is the first Turkish driver ever in the international one-make cup to post pole position. Florian Latorre (F/Fach Auto Tech) secured the second grid spot ahead of Porsche Junior Jaxon Evans (NZ/Fach Auto Tech).

The 32-strong field treated spectators to an action-packed qualifying in their  Porsche 911 GT3 Cup race cars, with a turbulent final phase. Halfway through the 30-minute session, Larry ten Voorde (NL/MRS GT-Racing) topped the timesheets. Donning fresh tyres, the drivers set one best time after the other in the final minutes on storied racetrack north of London. With four minutes left on the clock, Evans posted the quickest time, followed by Latorre, who was then shoved off pole by Güven in the last seconds. Only 0.07 seconds separated Latorre from the pole-sitter – thus the Frenchman shares the front row with Güven. “My lap was really good up to the last corner, but then I made a slight mistake and that cost me the pole. I won here last year; I really like this racetrack,” explained Latorre.

Latorre’s teammate Evans, who turned his fastest lap in 2:02.517 minutes, was delighted with his best qualifying position so far. “This result shows me that I have the speed. I feel good and optimistic for the race. It would be fantastic to achieve my first Supercup podium,” said the Porsche Junior from New Zealand. The fourth grid position is occupied by Mikkel Pedersen (DK/Dinamic Motorsport) ahead of ten Voorde.

Porsche Junior Julien Andlauer (BWT Lechner Racing) turned the sixth fastest qualifying time. “My fastest lap was annulled because I went too wide off the track. That’s really annoying. My aim for Sunday is to earn as many points as possible towards the championship,” said the Frenchman. Lining up behind the 20-year-old on the grid are Al Faisal Al Zubair (OM/Lechner Racing Middle East) and Joey Mawson (AUS/Team Australia). Less than a second separated the first 18 drivers on the time sheets. The fastest Pro-Am driver was the Norwegian Roar Lindland (pierre martinet by ALMÉRAS).

The VIP vehicle of Porsche AG will race this weekend for the first time this season. At the wheel of the nine-eleven is Chris Hoy, the six-time Olympic gold medallist in track cycling. The Scotsman qualified on 26th. “The session was great fun. Compared to free practice, I managed to improve by around two seconds – to be honest, I didn’t expect that,” said Hoy. The best British driver was Daniel Harper (JTR) on P11. Aside from the 18-year-old and Hoy, three more British racing drivers tackle the race on Sunday: Josh Webster (Team Project 1 – Fach), George Gamble (JTR) and Sebastian Perez (JTR).

Round four of the Porsche Mobil 1 Supercup gets underway on Sunday at 11.15am local time. Eurosport televises the race live in over 60 countries. Sky covers the international one-make cup in Great Britain and Italy, with Sport1 broadcasting in Germany. Fans can also watch the race live via the official Formula 1 streaming service (F1 TV).