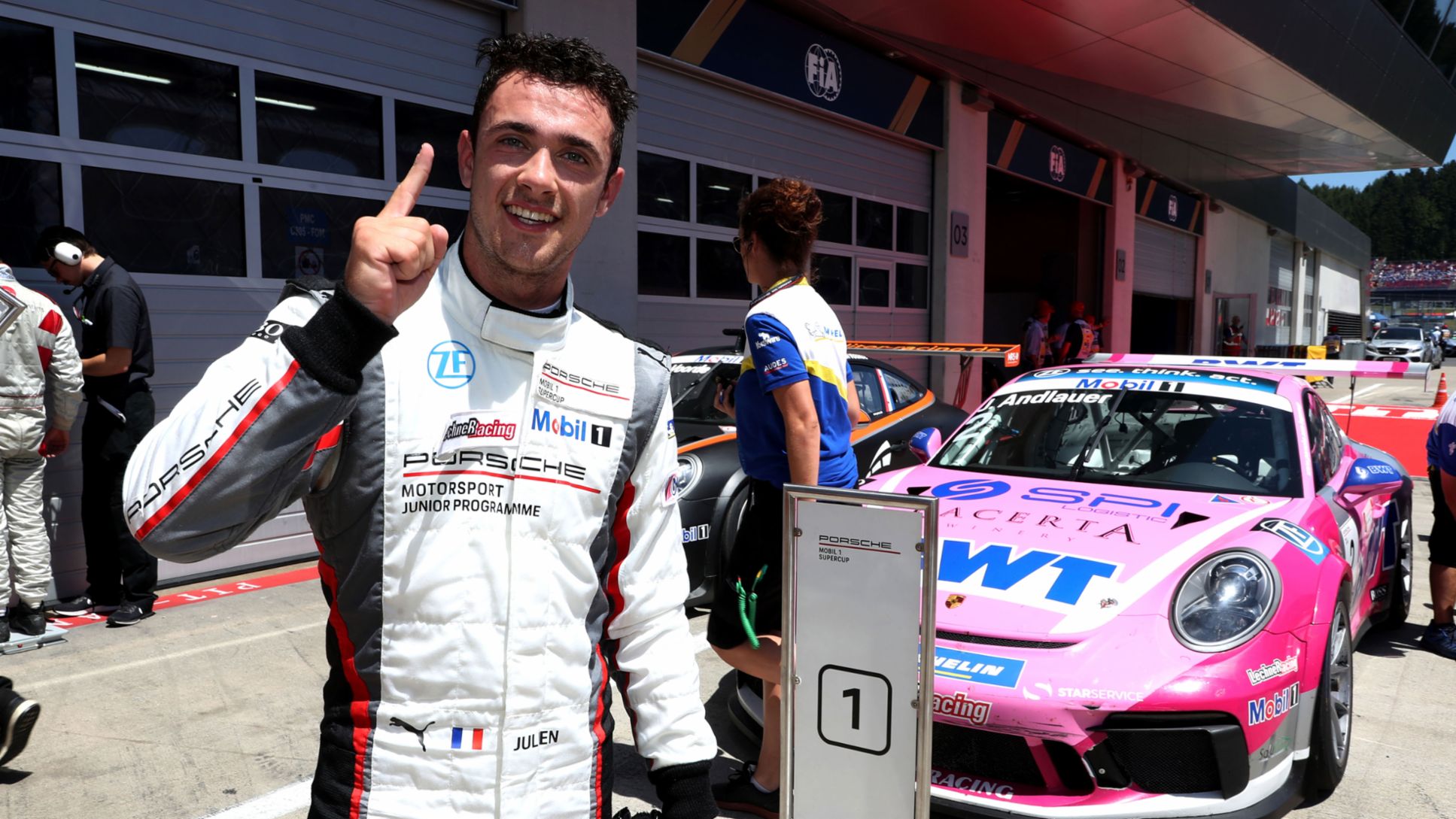 A lights-to-flag victory for Julien Andlauer in the Porsche Mobil 1 Supercup: At the Red Bull Ring in Austria, the Porsche Junior won round three of the season at the wheel of his Porsche 911 GT3 Cup ahead of his German teammate Michael Ammermüller.

“Fastest in free practice, pole position in qualifying and winner of the race – that was a perfect weekend. Although my start wasn’t ideal, I was really fast afterwards,” said Andlauer, who received his trophy on the podium from the entertainer and singer DJ Ötzi. With this, the Lechner Racing squad scored a double victory at its home race on Sunday. Third place went to Larry ten Voorde.

The race in Styria literally turned into a heated battle for the 30-strong field. Bright sunshine and temperatures soaring to 32-degrees Celsius made for challenging conditions. In the first lap, ten Voorde swept from second place past pole-sitter Andlauer. The Frenchman, however, countered immediately and reclaimed his lead. While Andlauer managed to pull clear from his pursuers, ten Voorde came under increasing pressure from Ammermüller. In lap nine, the seasoned specialist pulled alongside the MRS driver in the hairpin and overtook him at the end of the straight. “Larry ten Voorde defended himself well over a long stretch, but I was clearly faster. By the time I’d overtaken him, the gap to Julien Andlauer was simply too big for me to pose a serious threat,” said Ammermüller. The driver from Rotthalmünster in Bavaria was the only driver in the Porsche Mobil 1 Supercup to achieve podium results at all three races so far this season.

Ten Voorde reached the flag after 17 laps in third place. “My start was really good, but unfortunately Julien Andlauer grabbed his chance for an immediate counterattack. In the duel for second place, Michael Ammermüller had the advantage as he’d kept a fresh set of tyres from the qualifying for the race,” stated the 22-year-old. Jaap van Lagen was thrilled with his best result of the season so far with fourth place. Following him over the finish line were Mikkel Pedersen and Florian Latorre, who triumphed over Dylan Pereira in a fierce battle during the final phase of the race.

Marvin Klein was the best rookie after crossing the finish line in eighth place. Porsche Junior Jaxon Evans took off from 13th on the grid and managed to make up four positions. “After the disappointing qualifying, this was an important step forward. The conditions with this heat were unusual and a real challenge,” said the 22-year-old. Tio Ellinas from Cyprus rounded off the top ten.

Round four of the season will be in Silverstone

Roar Lindland celebrated his first place in the ProAm class. For the Norwegian, this marks the third win of the season in this category. Second on the 4.318-kilometre rollercoaster circuit went to Philipp Sager. This weekend’s race was a home event for the driver from Peggau in Austria. Behind Sager, Stephen Grove took the flag as third in the amateur standings.

For round four of the season, the Porsche Mobil 1 Supercup travels to the race in Silverstone, Great Britain, from 12 to 14 July. At the race run as part of the Formula 1 weekend, a VIP vehicle will be campaigned for the first time this season. Chris Hoy will take the wheel. The Scotsman has won six Olympic gold medals in track cycling and in 2015 clinched the LMP3 class of the European Le Mans Series.

Porsche Junior Julien Andlauer has posted pole position in the Porsche Mobil 1 Supercup qualifying at the Red Bull Ring in Austria on Saturday. For Sunday’s race run as support to the Formula One race, the Frenchman shares the first grid row with Larry ten Voorde (NL/MRS GT-Racing). This is the second time Andlauer has claimed the first grid spot this season. “This racetrack is so much fun. I won the German Carrera Cup here this year, and I’d like to do that again in the Supercup on Sunday,” said Andlauer. The third grid spot is occupied by the Porsche 911 GT3 Cup of Dylan Pereira (Momo Megatron Lechner Racing) from Luxembourg.

In the qualifying, 30 drivers battled it out for the best grid positions. The top time in the first half of the 30-minute session was set by Michael Ammermüller (D/BWT Lechner Racing). The championship leader turned the fastest lap after five minutes. For the final phase, the drivers switched to fresh tyres. Shortly before the end of the session, Porsche Junior Andlauer posted the fastest time of the day in 1:30.457 minutes, with ten Voorde just 0.215-seconds slower. “It’s simply fantastic to drive in front of so many Dutch fans. The first sectors were really good on my final lap, but my tyres were no longer ideal for the last two corners,” said the driver from Netherlands.

Pereira planted his nine-eleven on the second grid row next to Ammermüller. “At first I encountered a lot of traffic on the track, so a top time wasn’t possible. Unfortunately in my flying lap I didn’t take the last corner very well. Still, third place is a good starting point for the race,” said Pereira. Guest driver Igor Walilko (PL/MSG-Huber Racing Team) claimed the fifth grid position on the 4.318-kilometre circuit. Positions six to eight went to Jaap van Lagen (NL/martinet by ALMÉRAS), Florian Latorre (F/Fach Auto Tech) and Toni Wolf (D/Team Project 1 – Fach) as the best rookie.

Porsche Junior Jaxon Evans (Fach Auto Tech) takes up the race in Styria from P13. “This is obviously not the result I’d anticipated. It’ll be a tough race in this competitive field. Slipstreaming is pretty good here on the long straights,” said the New Zealander. The fastest driver in the ProAm classification was Roar Lindland (N/pierre martinet by ALMÉRAS) ahead of Philipp Sager (Dinamic Motorsport). The Austrian lives in the Peggau municipality just 60 kilometres from the racetrack. Lechner Racing will also compete in front of home crowds: The team is based in Faistenau in the Salzburg region.

Round three of the season gets underway on Sunday at 12.15pm local time. Eurosport televises the race live in over 60 countries. In Germany, Sport1 covers the international one-make cup, with Sky broadcasting in Great Britain and Italy. Fans can also watch the race live via the official Formula 1 streaming service (F1 TV).

IMSA: The Porsche customer team WeatherTech Racing has successfully concluded its first campaign with the 911 RSR.