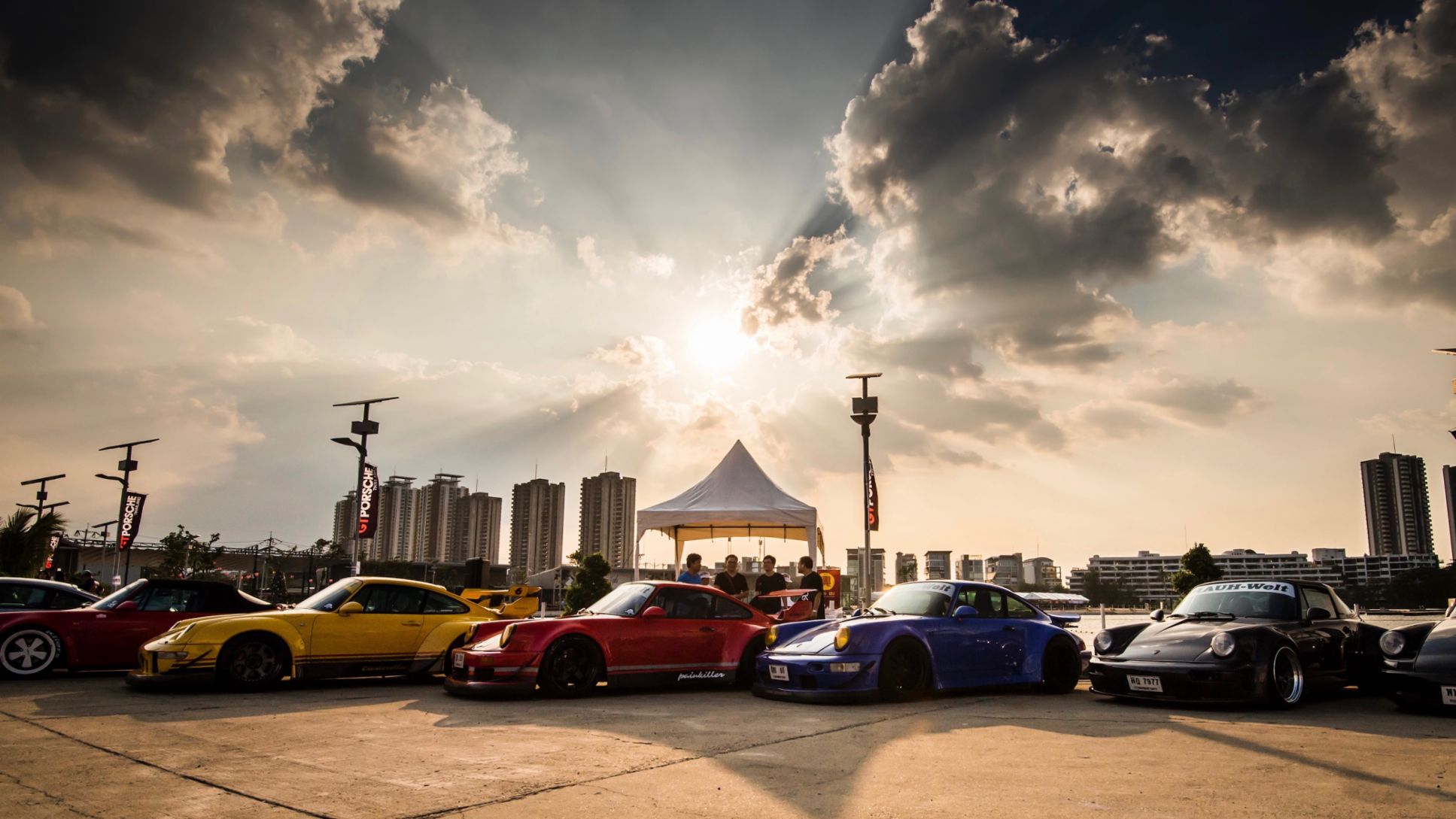 ‘Das Treffen’. ‘The meeting’ in its native German. Today these words are on the tip of a thousand tongues across the vast urban sprawl of Bangkok. Since the 1960s Porsche has exported vehicles to the Thai capital, creating a small but loyal fan base that now spans several generations. The recent resurgence in air-cooled culture has driven many Thai owners to bring mothballed cars out of storage and in the last five years Porsche fever has tangibly gripped Bangkok. What was still missing, however, was a means to harness this burgeoning passion, a proper Porsche gathering to rival the established meets in the US, Europe and Australasia. There was nothing of the sort in Southeast Asia; not until a man called Sihabutr Xoomsai appeared.

Xoomsai was inspired by his own passion

Xoomsai, known as Tenn to his friends, was first inspired by his own passion for Porsche. “I always had a thing for Porsche since I was a kid. The first Porsche I drove belonged to my father’s friend. He came over to our house one day in a brand new 964, tossed me the keys and asked me to get them something to drink. I never forgot that day – the sound, the smell and the kick in the back.”

“The most important thing I learnt that day,” Tenn recalls, “is that the best way to enjoy Porsche is to share it. Since then that is what I tried to do – to share my passion with my friends and fellow enthusiasts.”

In 2016, he decided to organise a casual get-together of Porsche cars and their owners. Was he inspired by the likes of Patrick Long’s Luftgekühlt’ in California? “Luftgekühlt”, he explains “is largely about the air-cooled cars. Even though we have a strong group of air-cooled lovers in Thailand, I wanted to make sure that every Porsche model is welcome. It’s really a get-together for the love and passion of Porsche for the Porsche family.”

The first thing was to decide on a name. He wanted to keep it simple and memorable, and recalled a meet he attended a few years ago called “Rgruppe Treffen”. The even simpler ‘Das Treffen’ seemed to work perfectly. As the Executive Editor of GT Porsche Thailand, coupled with the help of Porsche Thailand, Porsche Club of Thailand and Renndrive, Tenn had no difficulty spreading the message. And the response was simply overwhelming – nearly 1,000 enthusiasts registered for the first event and more showed up besides. There were over 300 cars on display in 2017 ­– only its second year – meaning Das Treffen had already grown into one the largest annual gatherings of Porsche enthusiasts in Southeast Asia.

Besides the attraction of the rare Porsche models, another highlight of “Das Treffen’’ was the camaraderie among old friends and new, who bonded over the experience as one Porsche family.

“I have made a lot of life-long friends from all over the world through the brand, and it’s amazing how people from different parts of the world can speak the Porsche language,” Tenn says. He has met enthusiasts from as far away as Malaysia, Singapore and even Dubai now, some driving their own Porsches all the way to Bangkok. And they all said the same thing – they will be back next year.

With 2018 being the 70th anniversary of Porsche sports cars, Tenn is confident that this year’s event will be very special. Could it be that ‘Das Treffen’ takes to the road? “We are open to ideas so we will see what comes our way. Das Treffen will always be about the car and its owner, and for everyone to enjoy. That will always remain!”