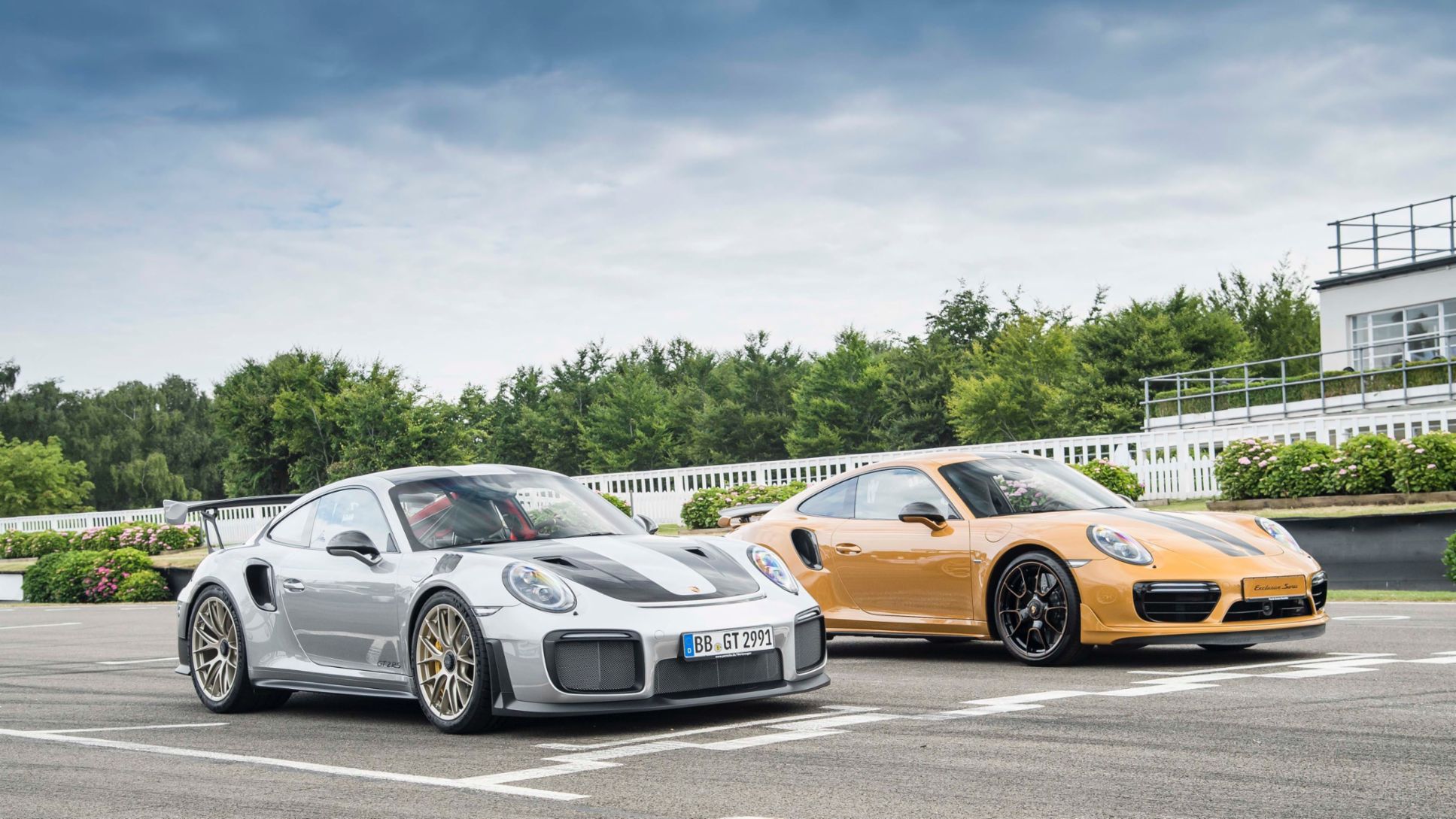 Porsche is celebrating the Goodwood Festival of Speed 2017 in the UK by unveiling two exceptional sports cars: the new 911 GT2 RS and the 911 Turbo S Exclusive Series. All updates of the event here.

The new 911 GT2 RS sees Porsche take turbo technology to new heights. The biturbo engine with a displacement of 3.8 litres delivers 59 kW (80 hp) more power than the engine in the previous model. For the first time, a Porsche Doppelkupplung (PDK) transfers the enormous power to the rear wheels. Thanks to its lightweight construction and thoroughbred motorsport chassis with rear axle steering, this fascinating two-seater offers competitive driving dynamics at speeds of up to 340 km/h. The optional Weissach package improves the weight-topower ratio even further as the lighter components made from carbon and magnesium provide a weight saving of 30 kg.

Porsche will unveil the 911 Turbo S Exclusive Series at Goodwood as a luxury counterpart to the 911 GT2 RS. The engine, design and equipment all bear the hallmarks of Porsche Exclusive Manufaktur. From a technical perspective, this limited-edition small series includes a power increase of 27 hp. Many of the body parts of the Golden Yellow Metallic Coupé are made of lightweight materials. The interior is particularly refined, with such features as two-layer leather covers, Alcantara roof lining in a Golden Yellow double-stripe look and Goldcoloured metal thread in the trim strips. The exclusive Turbo model is also available in five additional exterior colours on request.

The new Porsche 911 GT2 RS – the most powerful production 911 ever – has made its public debut at the Goodwood Festival of Speed. Fittingly, the 911 GT2 RS was seen for the first time in public doing what it does best - being driven hard on a challenging road. More specifically, the road was the 1.16-mile Goodwood Hill, running through the centre of the Festival of Speed, being held for the 25th time in Sussex, England.

Driving the 911 GT2 RS was Walter Rohrl. There were two further new additions to the 911 line-up – these were the new 911 GT3, driven by head of the GT programme, Andreas Preuninger, and the new 911 Turbo S Exclusive Edition, driven by Porsche Supercup racer and Porsche Carrera Cup winner, Paul Rees.

The mightiest Porsche of all and the car that won the Le Mans 24 Hour race, the 919 Hybrid, still covered in a layer of grime from its arduous achievement, was driven up the Goodwood Hill by 2015 Le Mans winner and current Porsche LMP1 driver Nick Tandy. The car was joined by its racing siblings from the past, including the 917/30 and the fire-breathing 935 ‘Moby Dick’, driven by Porsche Le Mans winner Richard Attwood.

The Goodwood Festival of Speed is the biggest motoring event of its kind, attracting over 200,000 visitors over four days – with every realm of motoring represented, be in on two wheels or four, race or road orientated.

Action from the Festival can be followed via Porsche Newsroom, the Goodwood Website or on Twitter using #PorscheFOS

Porsche in the UK

Porsche enjoys ever-growing popularity among British sports car customers. Between 2011 and 2016, total deliveries doubled to reach 13,288 vehicles. The SUV series have become established as bestsellers in the country. The most successful model line last year was the Macan with 4,618 new vehicles, followed by the Cayenne with 3,388 units. The 911 models take third place with 2,152 units. The Boxster (1,457) and Cayman (1,226) enjoyed a similar level of popularity. As it moved to a new generation, the Panamera remained at 446 units.