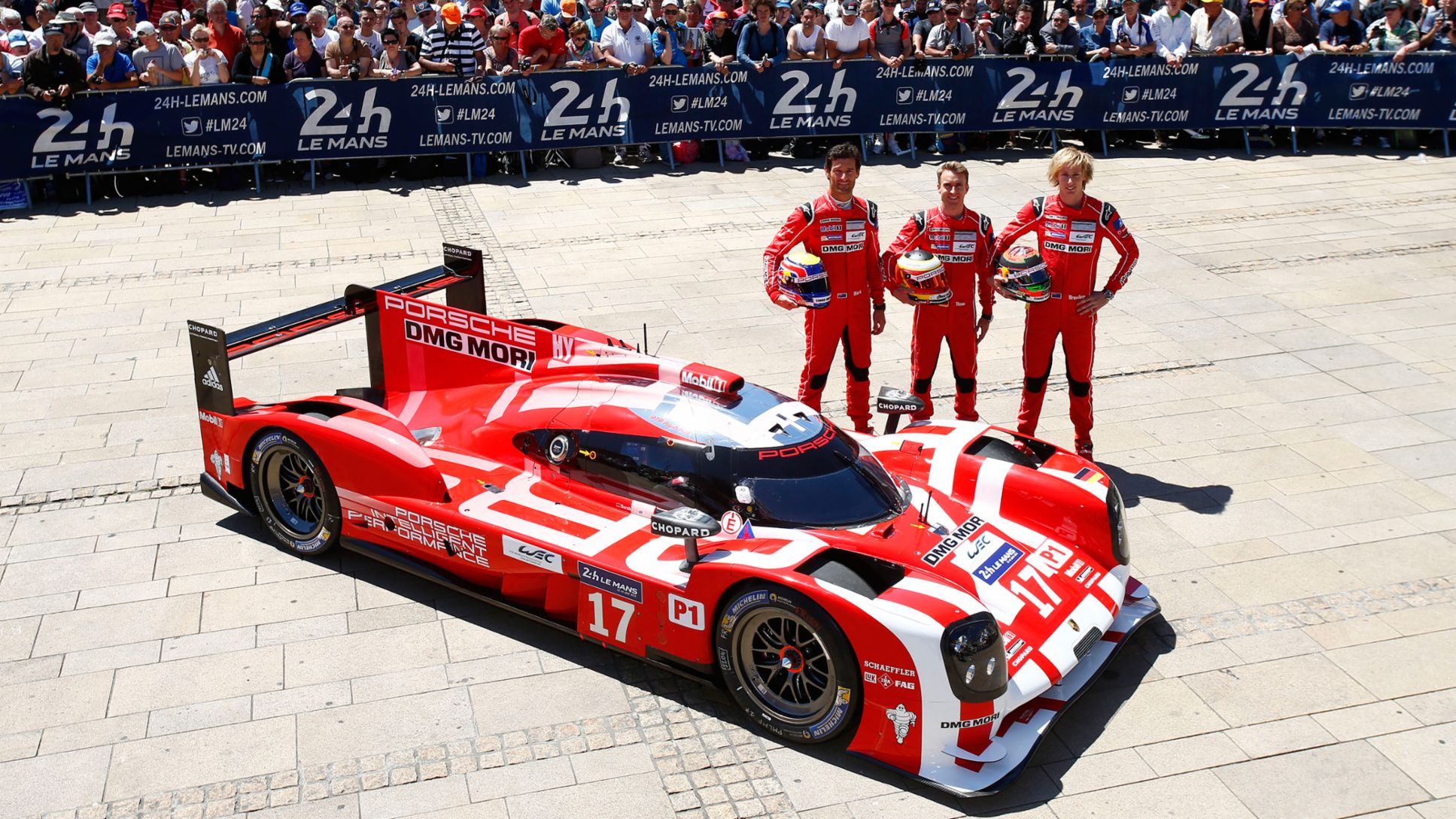 Three characters, one title: By finishing fifth at the 6 Hours of Bahrain, the three Porsche works drivers Bernhard, Hartley and Webber have won the 2015 FIA World Endurance Championship drivers’ title.

Each of them is a top athlete in his own right – together they have been unbeatable. Since the 2014 season they have shared a Porsche 919 Hybrid. In 16 races they achieved six pole positions and four race wins.

It is a varied trio: of them Timo (34, Germany) is the most successful in endurance racing. A member of the Porsche family since 1999, he has won titles in all categories. Especially when the programme was in its infancy, it was up to him to guide the newcomers Brendon (26, New Zealand) and Mark (39, Australia), who had just joined Porsche for the programme with the class one Le Mans prototype. Timo, Brendon and Mark have now won the first Drivers’ World Championship title in their careers.

What the World Champions say

Timo Bernhard: “Winning the FIA World Endurance Drivers’ Championship today is an exceptional moment for me and truly the icing on the cake. It was great seeing the team winning in Le Mans and clinching the one-two with our second place. The Manufacturers’ Championship for Porsche was another highlight for me. And now Brendon, Mark and myself even won the drivers’ title. I owe Porsche so much. It was Porsche who gave me the chance to be a professional racing driver. Together we have celebrated so many successes in different categories of motor racing. To secure the drivers’ title is incredible. I have Porsche in my heart, this is the brand I am living for. Today a dream has come true.”

Brendon Hartley: “I am very, very proud. My earliest memories are watching my father at the racetrack. I was six years old when I started racing go-karts and always dreamt of being a World Champion. I am extremely proud of sharing this moment with Mark, Timo and the entire Porsche Team. A big thanks to the guys at the computers behind the pits, the mechanics fixing the car in the box, the crew of car number 18, who did an incredible race to take the victory. And, of course, to Mark and Timo. We were all managing issues on the track. Every single person in the Porsche Team contributed to this. I will never forget this day, I am very proud!”

Mark Webber: “It’s the first World Championship for me – this feels beautiful. That’s not an easy thing to achieve, so to have won this title is very special. But to win it wearing a Porsche suit is even more special to me. The last time Porsche won this Championship was 29 years ago with Derek Bell.”

... has won every major sports car endurance competition: Le Mans, Daytona, Sebring, he has even won the 24-hour race in the Nürburgring outright no less than five times. Before becoming a World Champion, he had gained major international recognition after overall victory in Le Mans in 2010, which he won with Romain Dumas and Mike Rockenfeller for Audi. Back then he was out on loan from Porsche to its group partner.

Timo is the most senior Porsche works driver. He began his successful Porsche career in 1999 as a Junior and, to date, is the only works driver to become a champion in all the categories in which Porsche participates: In 2001 he won the Porsche Carrera Cup Germany, in 2004 the GT title in the American Le Mans Series and in 2007 and 2008 he was LMP2 champion in that series in a Porsche RS Spyder. In his leisure time he is involved in rallying. In 2013 he won an event in the German rally championship in a 911 GT3 near his home region. In 2014 he went on to win the Homburger ADAC hill climb – once again in a 911 GT3 Cup and on home ground. In the same year Bernhard succeeded in winning the Rallye Baden-Württemberg, which was part of the ADAC Rallye Masters-Championship. Also at home is “Team 75 Bernhard”, which is managed by his father Rüdiger. Despite all his international successes, Timo keeps his feet firmly on the ground. In 2013 he and his wife Katharina became proud parents of little Paul.

Timo experienced the tough beginning of the LMP1 programme, and drove the first 919 Hybrid on 12th June 2013 at the roll out. “An honour,” he said, and explained: “This was not just a new Le Mans racing car, it was a Porsche." He reminisced: “When I drove my very first company car in the village there were children standing around. I couldn't hear them, but I could see by their mouths what they were saying: It's a Porsche!"

… started with go-karts at the age of six, inspired by his father Bryan and his older brother Nelson, named after Nelson Piquet. Back home in New Zealand – Brendon Hartley grew up in Palmerston North on the North Island – he launched into formula racing. After a series of wins in Formula Ford and further successes, it was soon evident he had the talent to make a career out of it, but lived at the wrong side of the world. At the age of 16 he jumped in at the deep end – moved to Europe. He took up residence in the east of Germany and raced in a Formula Renault 2.0 in the German and European Championships. In 2007 he won the World Series by Renault. That was a defining time for him in a foreign country. He joined the Red Bull talent pool and worked hard.

Then he had a coup de main in 2008 at the Formula 3 Grand Prix in Macau: started 20th on the grid, finished third, including fastest lap. He was still taken by complete surprise when the phone call came from Red Bull, asking if he could stand in for the injured Mark Webber at a Formula One test. “Wow, this was what I had been working for all my life. I phoned home straight away and let it ring until I had woken my whole family.” He did well and moved from Germany to Milton Keynes in the UK, and it at least gave him the chance to live somewhere where they spoke his language.

He had a Formula One contract up to and including 2013 – first as a test driver for Red Bull Racing, and then for the Mercedes Team. His simulator work was highly regarded, but a racing driver has to race. In 2012 he started his second career in endurance racing: European Le Mans Series, Grand Am, 12 hours in Bathurst, 24 hours in Daytona and Le Mans. “My goal and hope was that one day I would attract the attention of a manufacturer. The fact that it was Porsche, the most successful brand at Le Mans – it’s a dream come true.”

… has had a roof over his head for two years now, but its been a car he has had to share with two others. After 215 Formula One Grands Prix, and winning nine of them, he left the F1 paddock at the end of 2013. Sharing the Porsche 919 Hybrid with two other drivers requires compromises for seats, pedal systems and set-up. It is vital and beneficial that the better a driver feels, the faster he will be, and in that context they certainly take good care of each other. “I surprised myself by how much I enjoyed sharing after a short period of familiarisation,” he said.

Mark left his home in Queanbeyan in New South Wales, Australia, at the age of 19. In England he was one of many of those without a sponsor. He won the prestigious Formula Ford Festival in Brands Hatch, drove Formula 3 and Formula 3000. He was invited to join the sports car programme at Mercedes. In Le Mans the car became airborne. Mark survived two dramatic crashes unharmed, but his career seemed to have run out of steam. The page turned, however, with a successful Formula One test for the Benetton team, which secured him a test and reserve driver position with the team in 2001. In 2002 he started his first Grand Prix and finished fifth in Melbourne – with an uncompetitive Minardi.

In 2005 he scored his first podium with the former BMW WilliamsF1 team. He had his first F1 win at the 2009 German Grand Prix with Red Bull Racing in his 131st race. In 2010 and 2012 he won the Monaco Grand Prix.
In 2014 he returned to Le Mans, was leading the race for some time, but retired with engine failure with two hours to go. In 2015 the car he was sharing with Timo Bernhard and Brendon Hartley was leading for an even longer period, but dropped back after a penalty and came second behind the winning sister Porsche 919 Hybrid. This is what Mark calls “unfinished business“. After the 2015 World Championship title he wants the Le Mans win in 2016 – in a Porsche. “To me this brand means highly developed sports cars that make the grade without being overstated – perfect for everywhere and in every scenario.” Being the private owner of 918 Spyder, a 911 GT2 RS and a GT3 RS 4.0, he is well prepared.