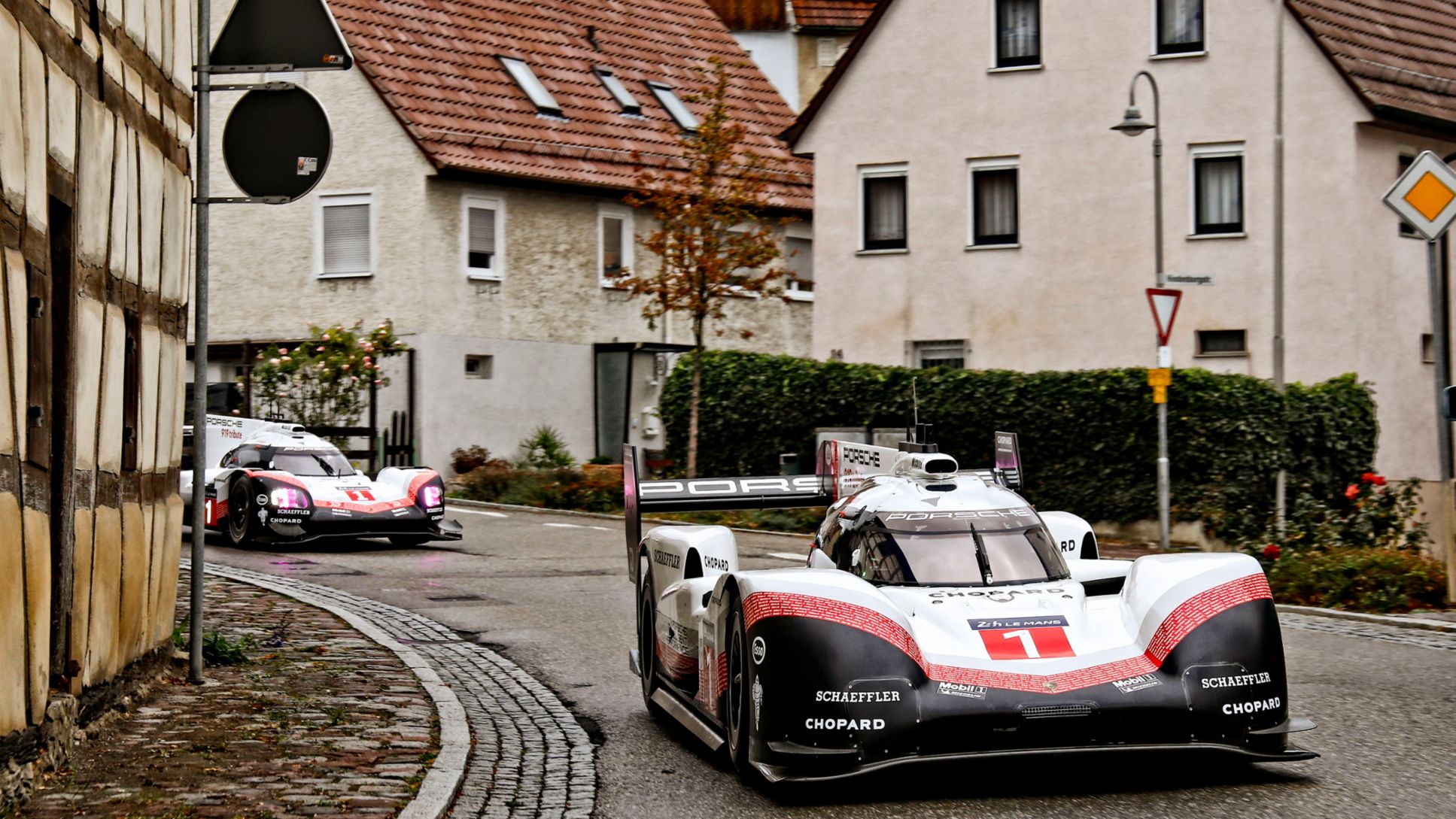 A convoy that compares to none: This morning the Porsche 919 Hybrid entered the Porsche Museum with the utmost class.

Escorted and approved by the authorities, Mark Webber and Marc Lieb drove two Le Mans prototypes from Porsche’s research and development centre in Weissach to the Museum in Zuffenhausen. The two drivers did 25 kilometres from Number 911, Porschestraße to Number 1, Porscheplatz – managing together more than 2000 hp in public traffic. Part of the welcome ceremony for the successful racing cars was a reading from the book “Legendary – The Porsche 919 Hybrid Project”, which will go on the market in December. The reading was performed by Dietmar Wunder, well-known as the German voice of Daniel Craig, alias James Bond 007.

Mark Webber (42, Australia) was at the wheel of the 919 Evo, which provides a system output of 1160 hp. The Evo is the ultimate development of the 919, with which Neel Jani broke Formula One’s qualifying record at Spa-Francorchamps in April 2018 and Timo Bernhard set an absolute track record at the Nürburgring-Nordschleife in June. Webber, a nine-times Formula One Grand Prix winner and Word Endurance Champion with the Porsche 919 Hybrid in 2015, said: “It was kind of crazy but fun to handle the beast in public traffic in Germany. It’s typical of Porsche to try to manage something cool like this. The 919 and the years in the FIA World Endurance Championship mean a lot to me. It was an honour to bring the 919 Evo home now.”

A nice finale for the 919 Hybrid

Marc Lieb (38) drove the second Porsche 919 Hybrid in the spec it used to race in the FIA World Endurance Championship (WEC for short). “Today’s drive was a very nice finale for Porsche, the 919 and for me personally,” he commented happily. Stuttgart-born Lieb won the Le Mans 24 Hours and the world championship with the 919 in 2016. “Every day I take parts of this route from my house in Ludwigsburg to get to work in the Weissach office. Being in my Cayenne, from now on I will always remember how it looked from the 919’s much lower seat position.”

Fritz Enzinger, Vice President LMP1, handed over the cars to Achim Stejskal, the Porsche Museum’s director. “I explicitly want to thank the authorities for enabling the 919’s final business trip,” Enzinger emphasised. “For the entire team this move-in to the museum marks the end of a very special era. Three Le Mans victories and a total of six world championship titles from 2015 to 2017 with the successful record at- tempts at Spa and at the Nordschleife in 2018 being the icing on the cake – you just cannot ask for more. The team and I would like to say a big thank you to the executive board and to the Porsche and Piëch families for their great support. The new book ‘Legendary’ and the coffee-table book tell and show the experiences and achievements of the LMP1 team. This means a lot to me.”

Team Principal Andreas Seidl was also pleased: “With the 919 Hybrid project we could explore the fields of technology for Porsche and showcase the performance modern hybrid technology provides. Ultimately this was achieved by the lap records of the ‘919 Evo’ on its 2018 ‘Tribute Tour’. At this point my special thanks go to our partners. Without them, we could not have financed the programme. The last miles on public roads now close the LMP1 chapter for us and we turn the page: Porsche faces the new challenge of e-mobility for road going and racing cars. We are getting very positive feedback for our Formula E entrance at the end of 2019. This is an extra boost of motivation to once again search for the limits.”

Back in 2011, the Porsche executive board decided to return to the WEC and to Le Mans with a class 1 prototype after revolutionary new regulations were introduced that required hybrid powertrains from 2014 onwards, together with a huge freedom in terms of development. Those rules had the context of relevant innovation – an allure that has always inspired the company. Ferry Porsche believed in the pressure that comes from racing as the best accelerator for development. Porsche is linked closer to the legend of Le Mans than any other manufacturer but had not taken outright vic- tory at the race since 1998, and the glory was fading.

On a clean sheet of paper a racing car evolved that had no role model. Porsche competed against Audi and Toyota with both manufacturers being more experienced entering prototypes. In 2011 in Weissach, neither a team nor the infrastructure for the programme existed. Technical development, buildings, recruitment – everything had to happen at the same time. There were throw-backs and doubts and drama – with a brutal accident and the first win coming within minutes of each other.

The Porsche 919 Hybrid, which had been created under such difficult circumstances, became a record winner. After the third consecutive success in 2017, Porsche has 19 overall Le Mans wins to its tally – plus three titles in both the drivers’ and the manufacturers’ world championships. The 2018 record-breaking tour truly made the car legendary. The YouTube video of Timo Bernhard’s lap on the Nordschleife has hit three million views.

The Porsche 919 Hybrid was a rolling laboratory for future technologies. In WEC specification it generated around 900 hp (662 kW) system output from a compact two-litre V4 turbo petrol engine (almost 500 hp/368 kW) in combination with two different energy recovery systems – brake energy from the front axle and exhaust energy. While the combustion engine drove the rear axle, an e-motor powered the front axle with over 400 hp (294 kW). The energy generated from the brakes and the ex- haust was temporarily stored in a liquid-cooled lithium-ion battery. In particular, the system’s 800-Volt technology turned out to be a pioneer for the purely electric sports cars from Porsche that will come to market in 2019.

For the record-breaking Evo version, the hardware in the drivetrain remained un- touched but was freed of the regulations’ restrictions: Without limitations on energy from fuel and recovery systems, the 919 could realise its full potential. Using the same fuel (with 20 per cent bio-ethanol), software updates led to a system output of 1160 hp. Everything that wasn’t needed for a single fast lap was taken off the car – reducing its weight by 39 kilograms to 849 kilograms. Active aerodynamic devices, a brake-by-wire system for all wheels and, given the higher aerodynamic force, stronger suspension and specially developed Michelin tyres also helped to increase performance. 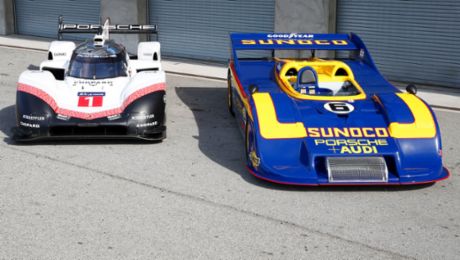