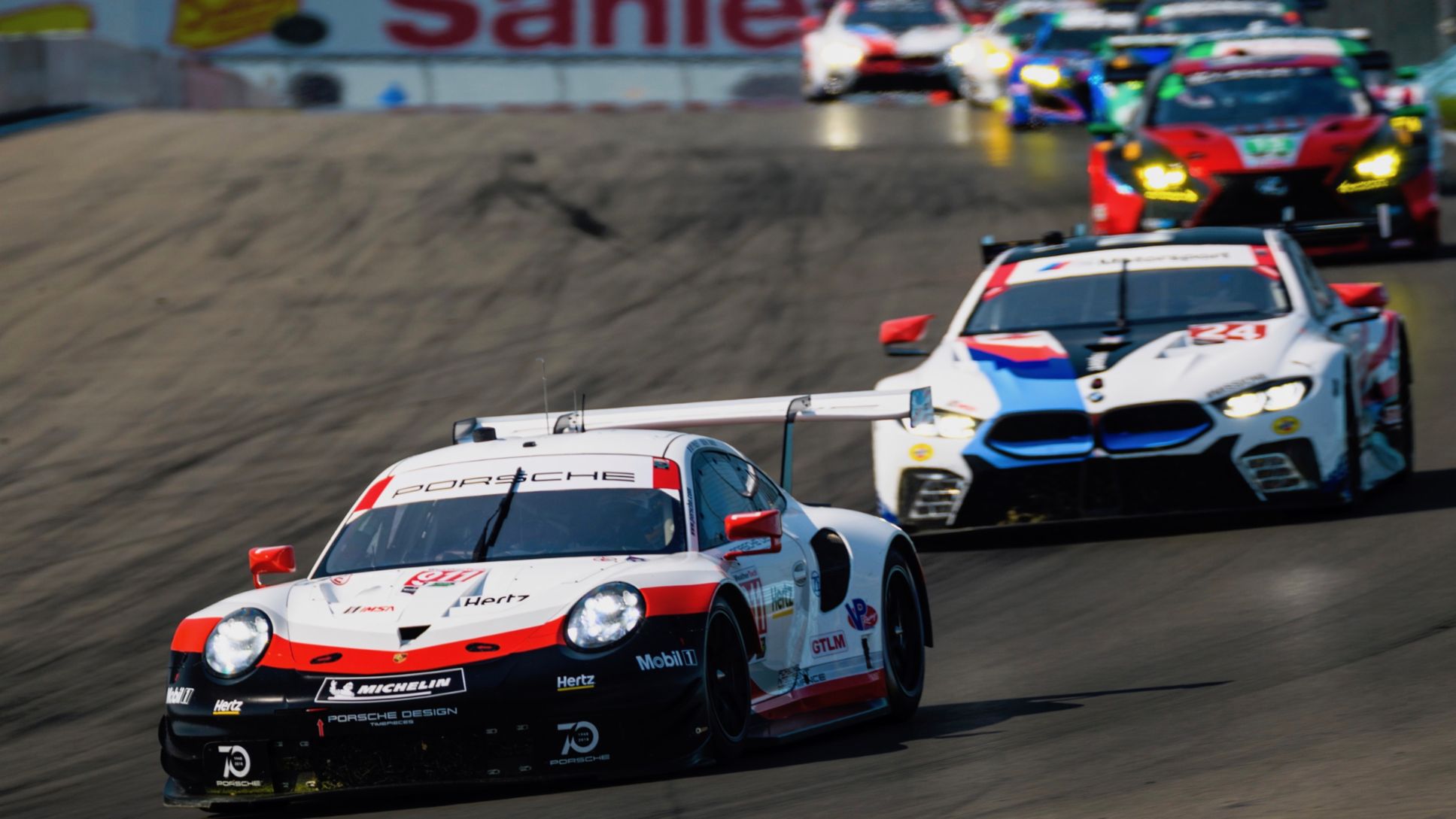 The six-hour race at Watkins Glen in the US state of New York turned into a heated battle: In temperatures reaching 34 degrees Celsius, the Porsche 911 RSR scored positions three and four.

At round five of the IMSA WeatherTech SportsCar Championship on Sunday, the Frenchman Patrick Pilet and Nick Tandy from the UK crossed the finish line ahead of the sister car driven by Laurens Vanthoor (Belgium) and Earl Bamber (New Zealand). In the GTLM class, the Porsche GT Team has notched up two wins so far this season at Sebring and in Mid-Ohio. After five championship rounds, Porsche ranks second in the manufacturers classification.

When the 42-strong field rolled onto the grid on Sunday morning, the temperature had already reached 30 degrees Celsius. In the GTLM class, in which four different automobile manufacturers fight for points, the two Porsche 911 RSR took up the race from the third grid row. Putting in swift pit stops and spectacular overtaking manoeuvres, the two vehicles battled their way up the field. Halfway through the race, they were running in first and second. When the safety car was deployed half an hour later, both frontrunners were struck by bad luck: Just as they were about to enter the pits to refuel and change tyres, the pit lane closed. Several competitors who were far behind managed to complete their pit stops shortly before this happened. This occurrence, however, threw both Porsche 911 RSR back to positions four and six. In the last hour of racing, Laurens Vanthoor in the #912 car was again hampered by a safety car phase and had to ultimately relinquish the fight for a podium spot.

After three of four races, Porsche lies in second place

Porsche managed to earn important points towards the North American Endurance Cup. After three of four races, Porsche lies in second place. The long-distance classics that count towards this classification are the 24 Hours at Daytona, 12 Hours at Sebring, 6 Hours at Watkins Glen as well as Petit Le Mans at the legendary Road Atlanta, which is run over ten hours.

Two Porsche 911 GT3 R contested the GTD class on the storied 5.472 kilometre racetrack. Patrick Lindsey (USA) and Jörg Bergmeister (D) occupied sixth place. Due to an accident, the duo were unable to take part in the qualifying and thus took up the race from position 18. Patrick Long (USA), Porsche Selected Driver Christina Nielsen (DK) and Robert Renauer (D) drove the #58 car sporting the US flag livery. The driver trio took up the race from eighth on the grid to cross the finish line in ninth place.

Round six of the IMSA SportsCar Championship will be contested on 8 July in the Canadian Tire Motorsport Park in Bowmanville/Canada.

Steffen Höllwarth, Porsche Programme Manager IMSA SportsCar Championship: “We can be happy with positions three and four. A clever tyre choice and a good strategy put us in the lead in the first half of the race. Then the safety car came out at an inopportune time. Several parts were lying on the track, but it wasn’t as if a car had hit the wall. For this reason you didn’t necessarily expect the safety car to be deployed. Several vehicles that were running far behind us opted to take the risk and come in for an early pit stop and that brought them forward. But when you’re running in the lead you don’t risk making such a stop.”

Patrick Pilet (Porsche 911 RSR #911): “It was a very intense race. The heat inside the cockpit was extreme and during my final stint my drinking system didn’t work. Now I’m thirsty but I’m also pleased to have climbed the podium. The race was a little complicated. At the beginning I was really wedged in and that means you lose a lot of downforce. In terms of strategy I’m proud of the team. We responded well. Ultimately we earned important championship points to take home.”

Nick Tandy (Porsche 911 RSR #911): “I’m pleased that we finished on the podium. Our car was fast and reliable. The caution phases didn’t go so well for us, but that’s typical for sports car races. When we were leading I could really go flat out. Overtaking, however, was extremely difficult.”

All results are available at: http://results.imsa.com

Review of the Qualifying

In the 15-minute qualifying for the IMSA WeatherTech SportsCar Championship, Earl Bamber set the fifth quickest time in the GTLM class with a time of 1:42.507 minutes. Patrick Pilet planted the #911 car directly behind. Shortly before the end of the qualifying session, which took place in sunshine and a temperature of 30-degree Celsius, both vehicles had locked out the second grid row, only to be out-qualified by the competition in the final seconds.

The Porsche GT Team tackles round five of North America’s premier race series on Sunday on the tradition-steeped 5.472 kilometre racetrack. For the long-distance race over six hours, New Zealander Bamber and Belgian Laurens Vanthoor share the cockpit of the #912 car, with Pilet (France) and Nick Tandy (Great Britain) driving the sister car. In the strongly represented GTLM class, in which four automobile manufacturers fight for honours, Porsche currently ranks first in the manufacturers’ category after four races and two victories.

Steffen Höllwarth, Porsche Programme Manager IMSA SportsCar Championship: “Until 20 minutes before the end of the session we’d counted on the second grid row. Then the situation in the qualifying changed. Still, we’re not worried about the race. We performed well in the race simulation during practice. It’ll be tougher in the race compared to the qualifying. But we’re heading into the race well prepared.”

Earl Bamber (Porsche 911 RSR #912): “Positions five and six are not what we’d hoped for, but we’ll have a good car for the race. I’m confident of this. We’re expecting a temperature of 30-degrees Celsius for the race and it’ll get pretty hot in the car for us drivers. The heat puts stress on the tyres, too, but let’s see how things go.”

Patrick Pilet (Porsche 911 RSR #911): “That was a difficult qualifying. We were a tiny bit off with our tyre choice, but I think we’re well sorted for the race. I like this track and we’ll do everything possible to climb the podium at the end. We have six hours to achieve this. The main thing here is to have a consistently fast car. That’s our forte.”

All results are available at: http://results.imsa.com

A fortnight after winning the 24-hour classic at Le Mans, Porsche takes on the next challenge in the USA: The six-hour race at Watkins Glen on 1 July heralds the start of the second half of the IMSA SportsCar Championship season. At the traditional race in the U.S. state of New York, the Porsche GT Team fields two Porsche 911 RSR in the strongly represented GTLM class. After scoring victories at Sebring and Mid-Ohio, Porsche leads the manufacturers’ classification of America’s premier sports car series. In addition to the long-distance races at Daytona, Sebring and Petit Le Mans, Watkins Glen, too, counts towards the North American Endurance Cup. Porsche currently ranks second in the toughest and most important performance and reliability category in GT racing worldwide.

The 5.472-kilometre Watkins Glen International racetrack was built around a forested hilltop and opened in 1956. The storied course is not merely a phrase for sports car fans around the world: From 1961 to 1980, the United States Grand Prix was contested on the outskirts of this tranquil town. 2015 marks the last Porsche victory at “The Glen” courtesy of Wolf Henzler and Bryan Sellers in the 911 RSR.

For the second race season, the 911 RSR was optimised primarily in the setup. Depending on the size of the restrictor, the motor, which is positioned in front of the rear axle, puts out around 375 kW (510 hp). The particularly large rear diffuser combined with a top-mounted rear wing provide strong downforce and aerodynamic efficiency. For 2018, Porsche provides its customer teams with an evo-kit for the 911 GT3 R. The ca. 368kW (500 hp) customer sport racer was designed for worldwide GT3 series on the basis of the 911 GT3 RS production sports car.

#IMSA - Two weeks after the #LeMans24, the focus goes to the #Sahlens6HRS at #WatkinsGlen. Fielding the No 911 and No 912 #911RSR, the #PorscheGTTeam hopes for their third #WeathertechChampionship win of the season after #Sebring12 and @Mid_Ohio @Porsche pic.twitter.com/qQuFBwVrGV

Dr Frank-Steffen Walliser, Vice President Motorsport and GT Cars: “After our triumph at Le Mans, Porsche is by no means returning to everyday life. The next big challenge awaits us at the Watkins Glen race, one of the great sports car classics in the USA. We are looking good in the race for the North American Endurance Cup, not least thanks to our win at the 12 Hours of Sebring. At this prestigious long-distance event, our 911 RSR shone in terms of performance and reliability. We want to bring home a top result from Watkins Glen, not only to extend our lead in the IMSA SportsCar Championship, but also to defend our chances to bring home the North American Endurance Cup title.”

Sebastian Golz, Project Manager 911 GT3 R: “The track suits our 911 GT3 R with the new Evo-update. It’s a flowing circuit and is only driven using the third to sixth gear. The slightly banked Turn 1 allows early acceleration, and from there you pick up the pace to carry momentum through the Esses. Typical of Porsche, the weight advantage makes it possible to brake very late into the chicanes in order to position the vehicle for the right-left-right combination. In Turn 11, you usually get slight lift. We’re curious to see if the curve can be taken at full speed with the Evo-update.”

Patrick Pilet (911 RSR #911): “We’ve had many great experiences at Watkins Glen. Okay, I haven’t won there yet, but maybe it’ll happen this time. It’s a fabulous racetrack and it suits our 911 RSR very well. We saw this last year when we were running in second place over a long period of time. I’m very much looking forward to it.”

Nick Tandy (911 RSR #911): “Watkins Glen is one of those classic racetracks – very fast and very demanding. Strategy plays an important role at a six-hour race. This’ll definitely play into our hands, as our team has a lot of experience. I’ve never climbed the podium at Watkins Glen, so it’s high time I changed that.” 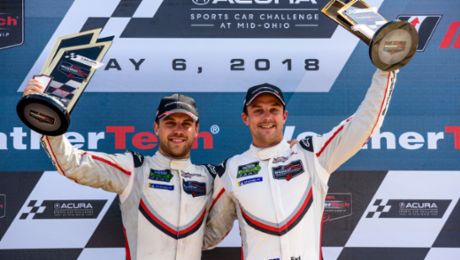 Clinching the second win of the season at Mid-Ohio, Porsche grabbed the lead of the IMSA SportsCar Championship. 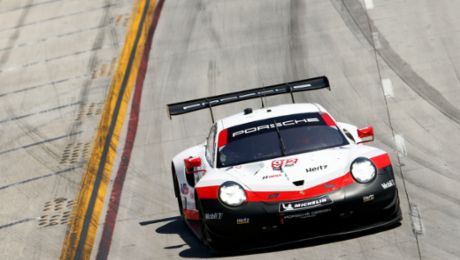 IMSA SportsCar Championship: In Long Beach the situation for the 911 RSR looked promising for a long time. 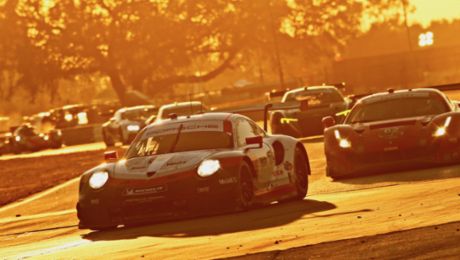 Victory and third place for Porsche at Sebring

The Porsche 911 RSR has scored its first win of the IMSA SportsCar Championship season in Sebring.