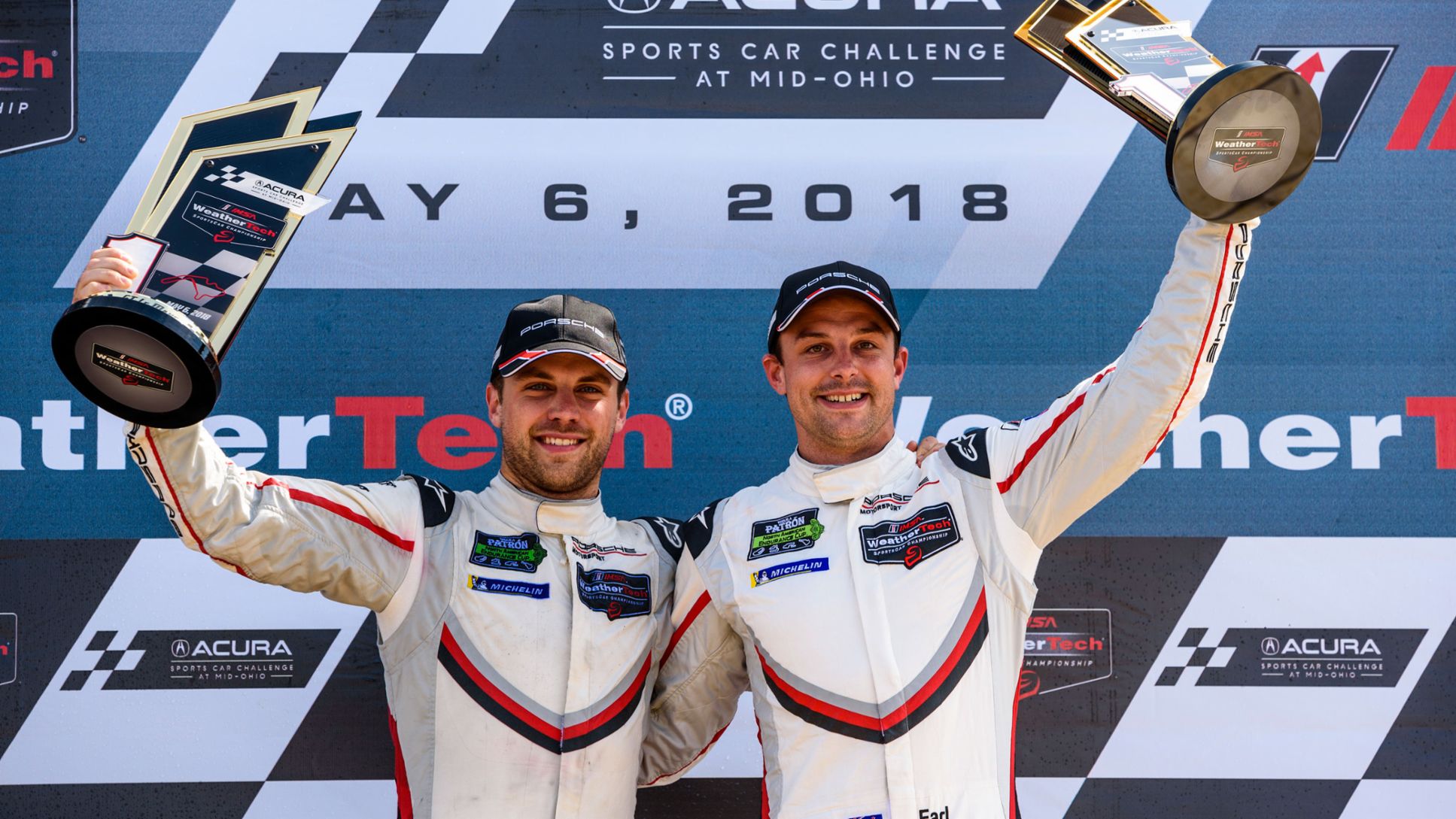 Second win of season for 911 RSR and championship lead

Clinching the second win of the season at Mid-Ohio, Porsche grabbed the lead of the IMSA SportsCar Championship. In a nail-biting finale, Laurens Vanthoor and Earl Bamber snatched victory with the Porsche 911 RSR on Sunday at the Mid-Ohio Sports Car Course and celebrated their first win in the USA as teammates at the most gripping race of the season by now.

After completing 118 laps on the tradition-steeped 3.634-kilometre racetrack in the Midwest, Laurens Vanthoor (Belgium) and Earl Bamber (New Zealand) held a 1.673-second advantage in the GTLM class. For the Porsche GT Team, this marked the second victory from four rounds so far this season of North America’s premier sports car race series. In March, Patrick Pilet (France) and Nick Tandy (Great Britain) won the twelve-hour classic in Sebring with the 911 RSR. At Mid-Ohio, the pair saw the flag in sixth after spending a long period in the lead.

This was the first race of the IMSA SportsCar Championship in Mid-Ohio. That the #912 Porsche 911 RSR managed to win this debut event is thanks to the concentrated and goal-oriented work of the drivers and team from the very first practice session. The Porsche GT Team had to do without viable data for vehicle setup and tyre choice, because at tests in mid-April on the racetrack close to Lexington the weather turned crazy: snow on day one, on day two the snow melted, however the temperatures fluctuated around freezing point. On race day, the sun was shining with summery 23-degree-Celsius temperatures and the many fans enjoyed watching the action from the grassy areas around the track.

Despite this, the team pulled everything together in record time. Laurens Vanthoor and Earl Bamber clocked the fastest time in all three practice sessions. In qualifying, Nick Tandy planted the #911 Porsche 911 RSR on the first grid row of the GTLM class and got the best jump off the line: He seized the lead in the first lap, with Earl Bamber, who’d gained two positions at the start, in his slipstream. Flying in close formation, the leading duo lapped the challenging circuit, keeping their strong rivals at bay. After the first pit stop, Laurens Vanthoor took the lead. On his second set of tyres, Patrick Pilet could no longer maintain the pace set by the leading group, leaving Laurens Vanthoor at the front.

The final phase of the race was the most exciting of the season and was definitely not for the faint-hearted: with 20 minutes to the flag, Laurens Vanthoor was running 3.879 seconds ahead of the BMW, who had pitted a long time after his competitors and was therefore chasing down the frontrunner on fresh tyres. With 15 minutes left on the clock, Laurens Vanthoor’s lead had shrunk to 3.587 seconds. Ten minutes to the finish and it was just 2.329 seconds, and five minutes later his advantage had diminished even further – to just 1.393 seconds. Under the enormous pressure, the Belgian kept his cool and brought the 911 RSR safely over the finish line in first.

Steffen Höllwarth, Programme Manager IMSA SportsCar Championship: “What a race. That was not for weak nerves. Laurens and Earl drove a flawless race and always stayed at the front. The final stint, when the freshly-shod BMW launched an attack and slowly reeled our car in, felt like an eternity. But Laurens kept his cool in the car. It’s fantastic how he brought the car home with just over a second to spare. It was like in the movies. It’s a pity that our #911 car was off the pace and lost ground after getting the second set of tyres. Still, this was a banner day for Porsche. Two wins from four races in the USA – that’s an interim result we can all be proud of. Porsche now leads manufacturer’s classification in both the IMSA and WEC championships. This gives us an additional boost heading to the 24 Hours of Le Mans.”

Laurens Vanthoor (911 RSR # 912): “We’ve waited for a year and a half for this day. We were often so close to winning, but then something foiled it. Today it was finally our turn. Earl drove a great first stint and conserved as much fuel as possible. After the first pit stop we took the lead. I tried to control the race while keeping a close eye on the tyres. That wasn’t easy, but it worked.”

Patrick Pilet (911 RSR #911): “Nick’s first stint was great. He did precisely what was needed to put us in the lead. I don’t quite know why our performance dropped off later, but we’ll take a good look at this and fix the problem before the Watkins Glen race.”

Nick Tandy (911 RSR #911): “Congratulations to our teammates. It’s great how they won this gripping race. For us, everything ran according to plan initially, we were in the lead until the first pit stop. But then we lost pace and dropped back. Today was a great success for the entire team.”

All results and points standings for the IMSA WeatherTech SportsCar Championship and the North American Endurance Cup can be found on results.imsa.com.

At the Detroit race on 2 June, the GTLM class will not be contested. The next round of the IMSA SportsCar Championship where the Porsche GT Team will compete is the six-hour classic in Watkins Glen in the US state of New York on 1 July.