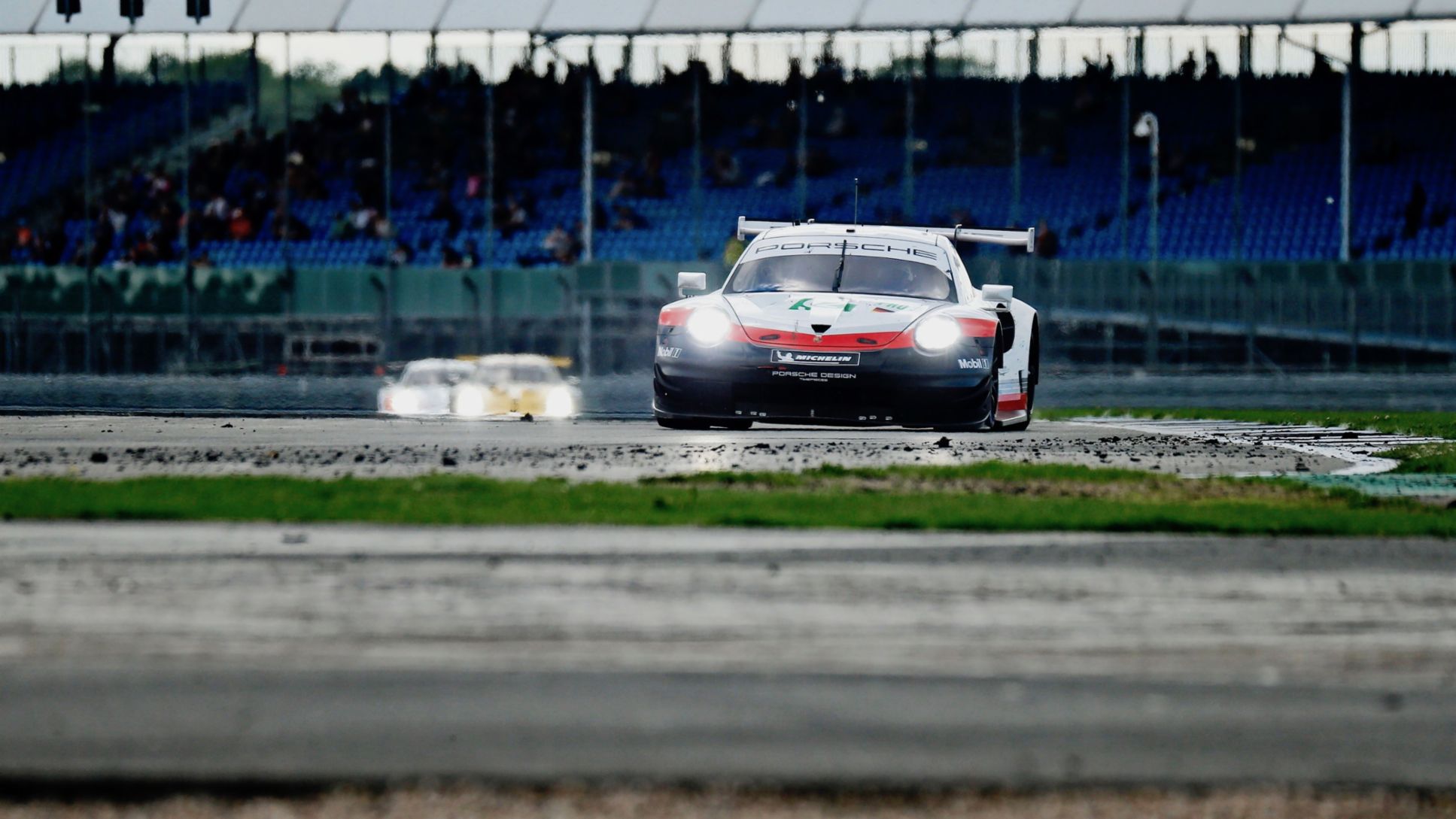 Podium for Porsche at Silverstone – victory in the GTE-Am class

In a turbulent round three of the FIA World Sports Car Championship WEC at Silverstone in Great Britain, Kévin Estre and Michael Christensen finished on third place at the wheel of the Porsche 911 RSR with the number 92.

The No. 91 sister car driven by Austria’s Richard Lietz and Gianmaria Bruni from Italy initially scored second, however was subsequently disqualified due to an irregularity in the ride height. Witnessed by 60,240 spectators, ten vehicles from five manufacturers fought for victory in the GTE-Pro class this weekend. Four additional Porsche 911 RSR race cars tackled the GTE-Am class in the UK. Victory went to Dempsey Proton Racing with Porsche Young Professional Matt Campbell (AUS), Christian Ried (Germany) and Porsche Junior Julien Andlauer (F). Porsche continues to lead the manufacturers’ classification in the GTE-Pro class as well as the drivers’ classification of both the GTE-Pro and GTE-Am classes in the WEC.

Under partly cloudy skies and with a temperature of 23-degrees Celsius, British spectators were treated to a gripping race with many changes at the front of the field. Estre and Christensen drove a spirited race. Estre made an inspired start in the No. 92 Porsche 911 RSR. The Frenchman got away well off the line and made the most of a collision amongst the front pack of the 34-strong field to sweep to the front of the GTE-Pro class. When his teammate, Dane Christensen, experienced tyre problems in the second stint, they fell back to position six, however, thanks to a good pit stop strategy, the pair worked their way back up to the front and at times held the lead. Towards the end of the race, however, they had to let vehicles pass. The two Le Mans winners continue to lead the drivers’ classification of the WEC.

The GTE-Am category also treated fans to some enthralling race action. Heading into the race from P2, the Dempsey Proton Racing squad with Porsche Young Professional Campbell, Ried and Porsche Junior Andlauer crossed the finish line first after 168 laps. Starting from pole position, the Project 1 team with Porsche works driver Jörg Bergmeister (Germany), Patrick Lindsey (USA) and Egidio Perfetti (N) led the field over two-thirds of the race. A stop-and-go penalty as a result of a pit stop error relegated the team back to position five, however the trio manoeuvred their way up the field to third place and celebrated their first podium result in the WEC. Michael Wainwright (GB), Ben Barker (GB) and Alex Davison (AUS) achieved sixth place for the Gulf Racing customer team. Gianluca and Giorgio Roda (I) as well as Porsche Young Professional Matteo Cairoli (I) brought the second Porsche 911 RSR fielded by Dempsey Proton Racing home in eighth.

Pascal Zurlinden (Director GT Factory Motorsport): “Unfortunately we were informed after the race that an irregularity was detected in the ride height. That threw our number 91 car out of the classification and advanced the number 92 car to third place. We’re still leading the manufacturers’ and drivers’ classifications. Now we need to focus on the next tasks.”

Kévin Estre (Porsche 911 RSR #92): “Our race started well and I moved into first place after the start and built up a comfortable lead. Unfortunately, Michael was hampered by tyre problems during his stint. We had to call him in earlier than planned and change our strategy. This enabled the Ferrari to overtake us in the pits. At the end, our tyres weren’t fresh enough to attack again. Still, I’m satisfied with our result.”

Michael Christensen (Porsche 911 RSR #92): “This race was really exhausting and long. Kévin did a great job at the start. Unfortunately I then had bad luck with the tyres and lost positions and we never managed to really catch up again, even if at times the situation looked promising.”

Round four of the FIA World Sports Car Championship WEC is contested on 14 October in Fuji (Japan).

Under cloudy skies and in temperatures of around 20 degrees Celsius, Kevin Estre (F) and Michael Christensen (DK) were just 0.719 seconds off the polesitter in the 911 with the starting number 92. The #91 sister car on tenth position is shared by Richard Lietz (A) and Gianmaria Bruni (I). After clinching a double victory at the 24 Hours of Le Mans, Porsche takes up the six-hour race on Sunday as the leader of the drivers’ and manufacturers’ classification.

Dr Frank-Steffen Walliser (Vice President Motorsport and GT Cars): “As expected, it was a difficult qualifying session for us. We’re satisfied with P5 for the number 92 car, it’s what we expected. With our other vehicle we have to see why we didn’t manage to turn better laps. I’m thrilled about positions one and two for our customer teams in the GTE-Am category.”

Gianmaria Bruni (Porsche 911 RSR #91): “This qualifying session was really difficult for us. We had problems getting the front tyres up to temperature and we couldn’t really turn a fast lap. Still, tomorrow is another day and we’ll do everything we can to get further up the field.”

Richard Lietz (Porsche 911 RSR #91): “That was definitely not our best qualifying. In the first lap the grip was still okay, but then the tyre temperature dropped and we lost grip. Unfortunately this meant we couldn’t do anything more. Now we just have to cross our fingers for the race.”

Kévin Estre (Porsche 911 RSR #92): “I’m really pleased with the qualifying. Michael drove a great lap. I encountered a lot of traffic on my first lap, but I still pushed hard and unfortunately made a mistake. In the second lap I didn’t have the grip I needed for a better lap time.”

Michael Christensen (Porsche 911 RSR #92): “I’m happy with the qualifying. My lap was okay. The car was well balanced and felt good. For this reason I’m heading into Sunday’s race feeling optimistic.”

Richard Lietz and Gianmaria Bruni tackle the six-hour race in the #91 car. Bruni from Italy won the WEC Silverstone race in 2012 and 2015, while Lietz crossed the finish line first there in 2014. The cockpit of the #92 Porsche 911 RSR is shared by Le Mans champions Kévin Estre from France and Michael Christensen from Denmark. After winning the world’s toughest endurance race earlier this year, the two drivers now lead the drivers’ classification in the GTE-Pro class. Porsche currently ranks first in the manufacturers’ classification.

Three customer squads field four more 911 RSR in the GTE-Am category. Porsche Junior Julien Andlauer (France), Christian Ried from Germany and Porsche Young Professional Matt Campbell (Australia) compete in the #77 car. Driving for Dempsey Proton Racing, the trio travels to Silverstone leading the drivers’ and team classification after scoring a class victory at Le Mans. Manning the sister car are Porsche Young Professional Matteo Cairoli (Italy), Khaled Al Qubaisi from the United Arab Emirates and Italy’s Giorgio Roda. Out of all the teams that contested the GTE-Am class at the Le Mans classic, the drivers of the #88 vehicle achieved the best grid position. Competing in the 911 RSR campaigned by the Project 1 team are Porsche works driver Jörg Bergmeister (Germany), Patrick Lindsey from America and Norwegian Egidio Perfetti. The two Englishmen Michael Wainwright and Ben Barker join forces with Alex Davison from Australia in the cockpit of the nine-eleven run by the British customer team Gulf Racing.

In 2017, the latest generation Porsche 911 RSR celebrated its WEC debut at Silverstone. At last year’s season-opening race on the British circuit, the Porsche works drivers Richard Lietz (Austria) and Frédéric Makowiecki (France) promptly scored a podium spot, with the 2017 vice champions concluding the race in Great Britain on third. The Silverstone circuit hosted the first modern-day Formula 1 Grand Prix in 1950. Legendary corners such as Becketts, Copse and Stowe were carved out of the grounds of a former military airbase.

The Porsche 911 RSR celebrated its WEC debut at Silverstone in 2017. So far this season, the racer from Weissach has clinched a one-two result in the GTE-Pro class at Le Mans as well as the GTE-Am class win. The water-cooled four-litre boxer engine is based on the seventh generation of the iconic 911 sports car. The #91 and #92 vehicles tackled Le Mans sporting a special historic design. For the Silverstone round, the Porsche GT Team will revert to the factory design with the primary colours white, red and black.

Dr Frank-Steffen Walliser (Vice President Motorsport and GT Cars): “After the close fight at Le Mans we’re ready to take on the next challenge. Our aim is to defend our lead in the points. Silverstone enjoys a long tradition and holds a very special place in the hearts of drivers and motor racing enthusiasts. We’re up against tough competition, but we’re perfectly prepared. At Le Mans, the Porsche 911 RSR once again underlined that it can handle huge stresses and is reliable.”

Pascal Zurlinden (Director GT Factory Motorsport): “The high grip level at Silverstone puts special demands on the setup of the 911 RSR. Intuition and finesse are needed here. Only those who opt for the right setup will be in a position to fight for victory. We were among the frontrunners to the end at Spa and we scored a double victory at Le Mans – it should continue like this at Silverstone.” 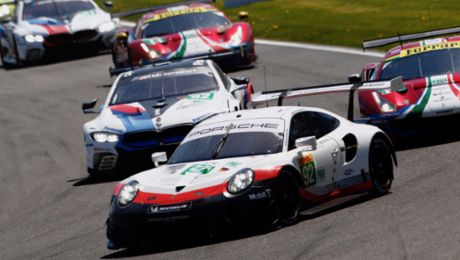 After a gripping race at Spa, Porsche has started into the new season with second and fourth place.