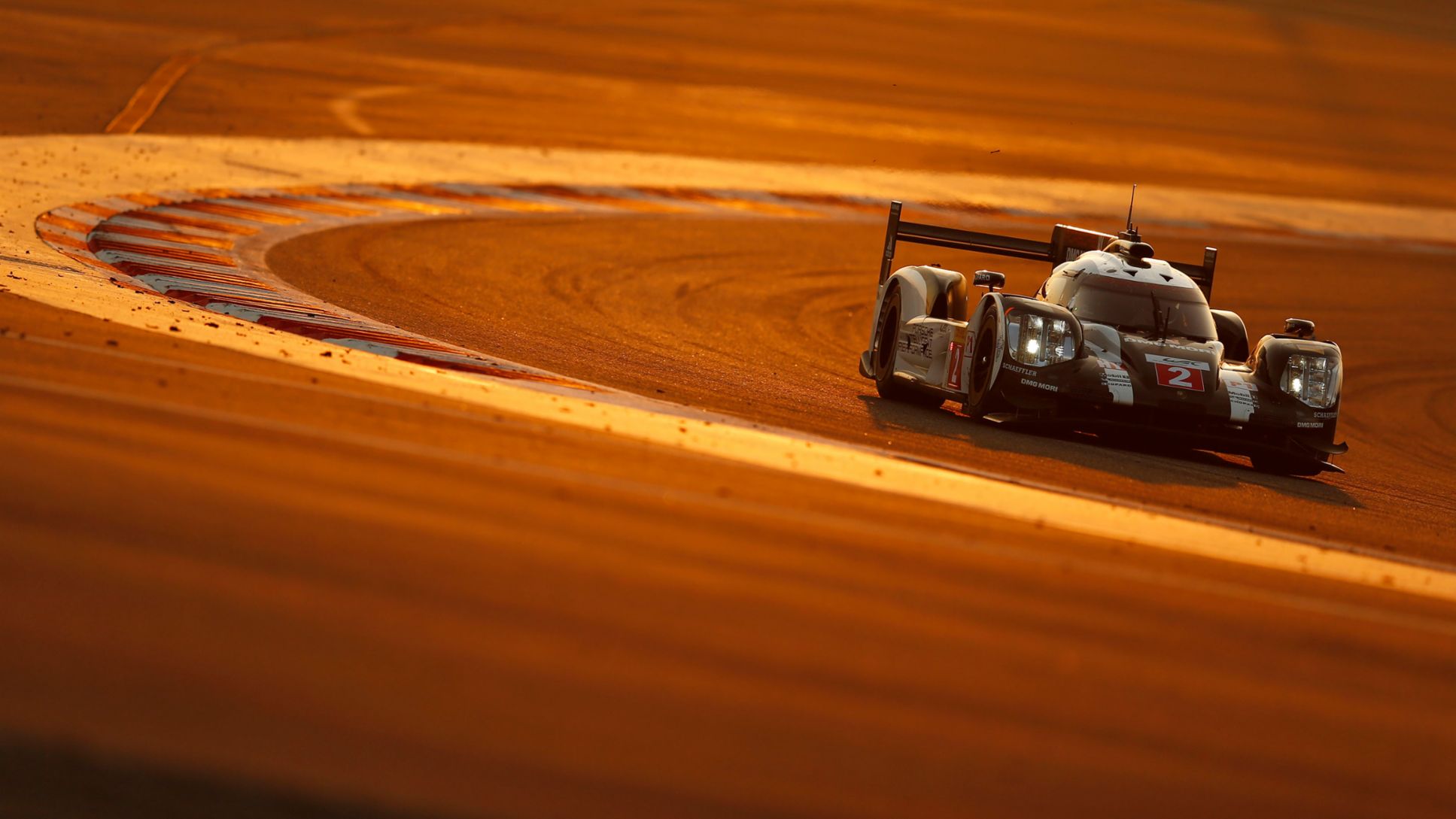 Can Porsche secure the world championship title for manufacturers? How does Mark Webber experience his final racing weekend? Find all information from Bahrain in our news blog.

It's done! 919 Hybrid No 2 comes in 6th, but Toyota couldn't win the race. Congrats to Marc Lieb, Romain Dumas and Neel Jani for winning the WEC drivers championship!

Mark Webber is now driving the 919 Hybrid No 1. For the last time!

In @Porsche_Team garage, @AussieGrit is waiting beside @fritzenzinger for the last stint in his career as professional race driver pic.twitter.com/UwPSJ0LlVR

Last our of the race

One hour is left. Positions are unchanged. With the Toyota on P4 & P5 right now, Marc Lieb, Romain Dumas and Neel Jani would win the drivers championship.

Porsche is still on P3 and P6. See the highlights of the first half in this video:

919 Hybrid No 2 is back on track, but dropped back some positions.

Oh no! Damaged left rear tyre of car No 2 caused by contact with GTE car. 919 Hybrid has to pit in.

Start of the race

Green flag! The race has begun. The quickest updates from the racetrack can be found on Twitter. Regular updates here.

Race about to start in 45 min

The drivers are getting ready for the grid. For Dumas/Jani/Lieb the six-hour race is all about the drivers’ world championship. They have an advantage of 17 points ahead of the best placed Toyota. Finishing fifth in the race would still be enough for them to win the title, even if the number 6 Toyota won.

All point standings can be found here.

Just before the race the drivers are there for the Fans.

Webber as Taxi driver? Not a good idea, if you ask Brendon Hartley...

Cameraman? Cook? Taxi driver? In tha past few days, the FIA WEC made some humorous suggestions for new job opportunities for Mark Webber... but it's not sure if these fit.

World class driver Mark Webber takes on new tasks at the end of the season: He will quit his professional racing career to become Porsche special representative. Obvioulsy, his last race in Bahrain is very special to him:

“Of course we would love to go out with a victory, but, irrespective of the result, I think it would be nice for me to have a smooth day and look back on a very, very long career of which I’m, of course, very proud. I thought about it a few times: I will walk away from the car just one more time – take the helmet and balaclava off and the ear plugs out, doing all these things for one last time.” Mark Webber, works driver LMP1

From the L.A. Autoshow directly to the 6 hours of Bahrain: the new 911 RSR. Porsche will tackle the 2017 racing season with the all-out newly developed GT racer. A short introduction given by the FIA WEC:

Discover the incredible new @Porsche #911RSR GT car - on show in the paddock in the run up to #6hBahrain! pic.twitter.com/4XABGgIzYT

Good morning and welcome again from the Emirates! The 6 hours of Bahrain will start at 4 pm local time (2 pm CET). Tension is rising...

Only few hours left untill start of @FIAWEC final #6HBahrain and the drivers' title decision. Watch our short clip to prepare yourself pic.twitter.com/1YPxglBzI4

Good night and see you tomorrow!

That's it for today from Bahrain. Tomorrow, we will see the WEC season finale and the answer to the question: Who will win the drivers championship? Mark Webber as well is facing an extraordinarily emotional race, as it will be his last one as a professional driver. The Porsche Newsroom reports live on site.

The Porsche Team with the two 919 Hybrids achieved a good qualifying result in Bahrain: Last year’s world champions, Timo Bernhard, Brendon Hartley and Mark Webber, will start from second on the grid for the finale of the FIA World Endurance Championship (WEC). The sister car, with the aspirants for the 2016 drivers’ title, Romain Dumas, Neel Jani and Marc Lieb, will start third on the grid for the six-hour race on Saturday.

Tomorrow is all about the drivers’ world championship

In the WEC the average of the two fastest laps of two drivers counts for the qualifying result. In Bahrain the qualifying drivers were Bernhard/Hartley (car number 1, position 2, 1:39.471 minutes) and Jani/Lieb (car number 2, position 3, 1:39.669 minutes). Audi took pole position on the 5.412 kilometre long Formula One circuit in the Persian Gulf.

For Dumas/Jani/Lieb the six-hour race is all about the drivers’ world championship. They have an advantage of 17 points ahead of the best placed Toyota. Finishing fifth in the race would still be enough for them to win the title, even if the number 6 Toyota won.

Enzinger: “My compliments go to our entire team”

Fritz Enzinger, Vice President LMP1: “Today we saw a very good qualifying against exceptionally strong competition. My compliments go to our entire team for this performance. The weather conditions are consistent. We have all the ingredients in place for an exciting race tomorrow, when we want to reach our big aim of also winning the drivers’ title for the second time in a row.”

Qualifying LMP1 about to start

Qualiying is getting closer. Start is at 5:30 pm local time (3:30 pm CET)! Keep your fingers crossed!

The interest in Mark Webber and his final race as a ProDriver is huge. The colleagues from CNN Sport also have some questions for "Aussie Grit".

📽 Almost the end of the road for @AussieGrit 🏁 but what a career! 👏🏻 🇦🇺 #WEC #F1 #CNNTheCircuit pic.twitter.com/AXQwdGvXSc

After his professional racing career, Mark Webber will become Porsche special representative. The FIA WEC has collected some humorous alternatives. The video will be online tomorrow. Beforehand you can see the first suggestion here: Taxi driver!

Two beauties are welcoming the guests at the Bahrain International Circuit. After the L.A. Motorshow, the Porsche 911 RSR celebrates its premiere in the Emirates! On the left: the 2016 919 Hybrid.

Webber: A lap in Bahrain

Ahead of his last race for Porsche, let Mark Webber talk you through a lap of Bahrain International Circuit.

It was a smooth Free Practice 3 for the Porsche Team!

For those who cannot wait any longer, we have a short video with scenes from the racetrack in Bahrain!

The @FIAWEC driver's title decision comes closer. Watch our short clip if you can't wait for #6HBahrain to begin on Saturday... pic.twitter.com/7Fbc7tpxLA

The championship leaders, Romain Dumas, Neel Jani and Marc Lieb topped the time sheets in both of the two 90-minute free practice sessions. Jani set the fastest lap of the day with a time of 1:39.817 minutes. This is only 0.081 seconds slower than last year’s pole position time, and this is despite the fact that, according to the regulations, the Porsche 919 Hybrid can use eight per cent less energy per lap in 2016. The reigning World Champions, Timo Bernhard, Brendon Hartley and Mark Webber came fifth and second in the two sessions on the 5.412 kilometre long Formula One circuit in the Persian Gulf region. In this trio Hartley did the fastest lap in 1:40.272 minutes.

Team Principal Andreas Seidl summed up the first day: “A good start for an important race weekend here in Bahrain. It was of key importance to have two trouble free sessions for both our cars. We are satisfied that we were able to achieve this and could work on our programmes as planned. Today there were qualifying simulations as well as tyre evaluation on longer runs. We are obviously quick over a single lap, on the long-runs, however, the competition appeared to be very close. We will now analyse all the data. Both driver crews are reasonably happy with their 919 Hybrids. We will, however, try to find further set-up improvements tonight.”

In the meantime it got dark here in Bahrain. The sunset is already at 4:45 pm local time. It's Timo Bernhard in 919 Hybrid no 1 and Marc Lieb in car no 2 who are driving first.

Free practice session 1 is finished. 919 Hybrid no 2 of FIA WEC leaders Marc Lieb, Romain Dumas and Neel Jani set fastest lap in 1:42,107 min. For the next sessions even faster laps are expected.

It is a special race for Mark Webber. This requires special support. One of his fans in Bahrain: his father Alan.

Braking: We found a proper replacement for retiring @AussieGrit in #919hybrid #1, and his name is Webber, too: Welcome Alan @Porsche_Team 😎 pic.twitter.com/hCdNgr3Fp7

Jani: Positive before the finale

“At the most recent race in Shanghai our pace was very good in the beginning, we were on track for the title win, but then we lost ground. This was analysed and we found the reason for it. This makes me very positive before the finale. After having secured the manufacturers’ title, it would be the greatest joy to now seal the drivers’ title as well.” Neel Jani, Works Driver LMP1

A lap on the F1 track of the Bahrain International Circuit is 5.412 kilometres. It has eight right-handers and six left-handers. The longest straight is at the start-finish and measures 1.090 kilometres.

Bernhard: “We will do everything for Mark”

“Being the season’s closing event and the last race for my team mate Mark, it definitely will be a highly emotional weekend. We will do everything that he can walk away with the best possible result for a nice farewell. Of course we’d love to finish the season with another victory.” Timo Bernhard, Works Driver LMP1

Webber: “Not a normal race”

“Bahrain is obviously not a normal race for me. It will be pretty emotional. To arrive there knowing it is the last time I will compete seriously will be a big moment. I’m looking forward to the weekend. I’ve got a lot of friends coming from all around the world, especially from Australia and Europe, to watch me drive for the last time.” Mark Webber, Works Driver LMP1

Enzinger: “Bundling up all our forces”

“For the finale now we will again bundle up all our forces to win the drivers’ crown again in Bahrain. It is not going to be easy, but surely exciting. I just hope it doesn’t become such a nail-biter as it was in 2015. Thinking about this race being the last one for Mark as well as for our highly respected competitor Audi, I prefer to postpone until afterwards.” Fritz Enzinger, Vice President LMP1

After having won the world championship title for manufacturers, Porsche is determined to also take the drivers’ title at the final round of the 2016 FIA World Endurance Championship (WEC) on November 19 in Bahrain. This year’s Le Mans winners, Romain Dumas (FR), Neel Jani (CH) and Marc Lieb (DE), have an advantage of 17 points ahead of the best placed Toyota. In other words: bringing home the 919 Hybrid in fifth place would be enough for the title win, even if the Toyota wins and also takes the one point for pole position. The basic requirement is a clean and error free six-hour race.

While the driving trio in the number 2 car fights for the title, the number 1 car’s crew also faces an emotional weekend: Bahrain will see the trio of Timo Bernhard (DE), Brendon Hartley (NZ) and Mark Webber (AU) racing together for the very last time after the former Formula One driver announced his retirement at the end of the season. In the future he will join Porsche in his new role as special representative. The three drivers, who are still the reigning world champions, have won four races so far this season. However, after being unlucky earlier this year and in Le Mans, they still rank fourth in the standings.