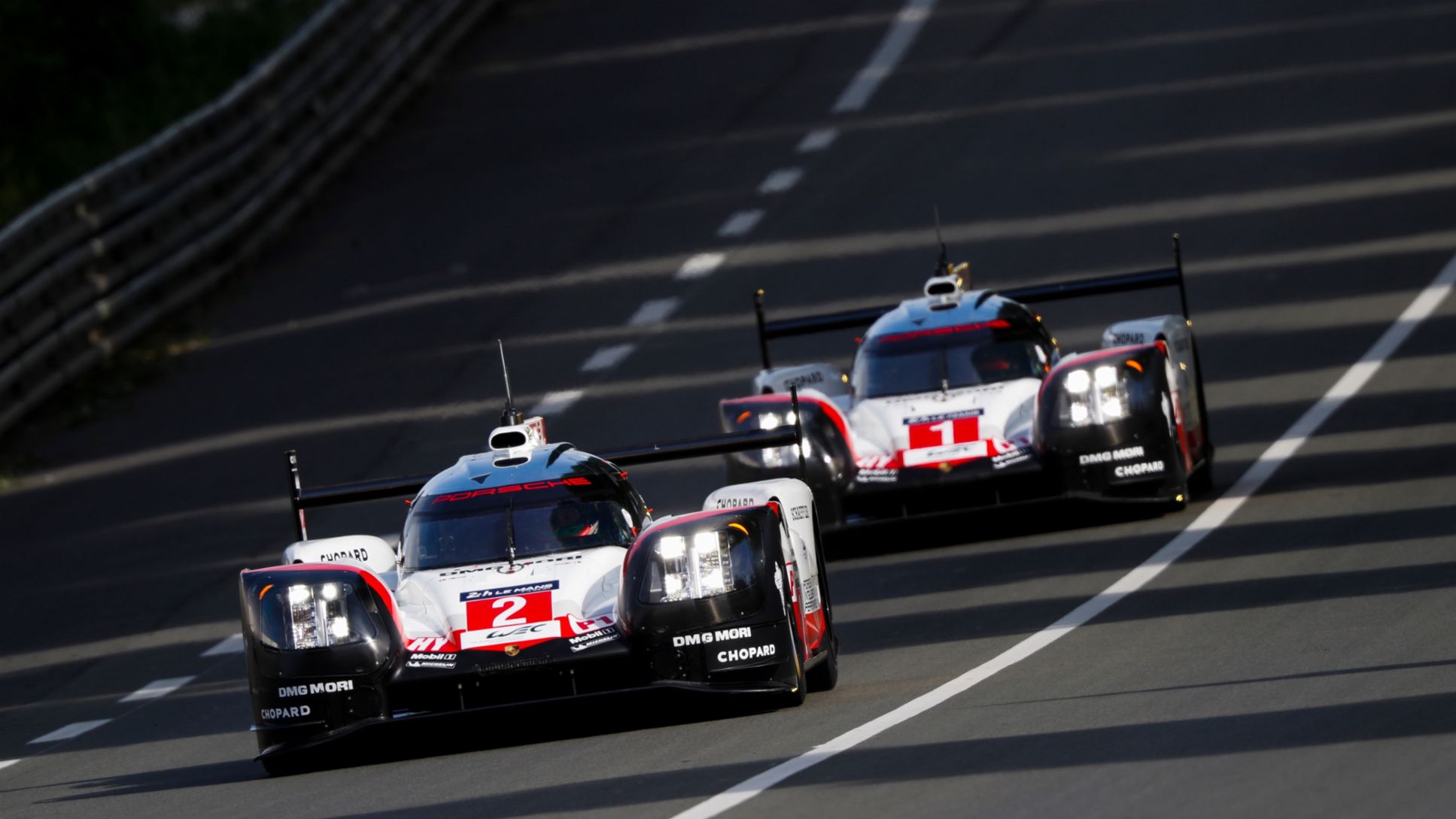 The countdown for the Le Mans 24 Hours is on: At the official pretest on the 13.629-kilometre Circuit des 24 Heures, the Porsche Team has entered the critical phase in preparing for the world’s toughest automobile race.

The best 2017 lap time of a Porsche 919 Hybrid at the official Le Mans test was 3:21.512 minutes which means an improvement by seven tenths of a second compared to the 919’s best test lap time in 2016. This was achieved despite restrictions enforced by new regulations concerning the aerodynamics in particular. The Porsche LMP Team refrained from simulating qualifying at the test and finished fourth and fifth quickest behind Toyota after eight hours of testing.

911 RSR celebrates its much anticipated debut at Le Mans

Sixty cars and 180 drivers will take up the prestigious pursuit around the clock on 17 June, which marks the 85th running of the French classic. Two of these contenders are the new 911 RSR. The race car, which Porsche Motorsport developed in Weissach based on the seventh generation of the iconic 911 sportscar, celebrates its much anticipated debut at Le Mans in the fiercely contested GTE-Pro class.

In changeable conditions and pleasant temperatures of just over 20 degrees Celsius, all six GT works drivers, who will drive the 911 RSR at the long-distance Le Mans classic in France, worked on the setup of the new cars and on testing tyre options. Richard Lietz (Austria) and the Frenchmen Patrick Pilet and Frédéric Makowiecki share driving duties in the #91 Porsche 911 RSR. During the two four-hour test sessions, the trio covered a distance of 1,185.723 kilometres and drove the fastest lap in the GTE-Pro class.

The sister car with the starting number 92, driven by Michael Christensen (Denmark), Kévin Estre (France) and Dirk Werner (Germany), covered a distance of 981.288 kilometres and posted the second quickest time. The 24-hour circuit with its legendary corners like Mulsanne and Tertre Rouge as well as its almost five-kilometre-long Mulsanne straight is unusual in its mix of racetrack and normal roads. This, too, throws special challenges at the pilots and their cars.

#LEMANS24 - With only 30 min left at the @24hoursoflemans test day on #Circuit24Heures, here's another #videoclip of the #911RSR. @Porsche pic.twitter.com/FNpOvkUUXC

Matteo Cairoli in the Spotlight

At the pretests, the focus for the three Porsche customer teams fielding four 2015-spec 911 RSR in the GTE-Am class was on the setup and tyres. The spotlight was on the #77 nine-eleven run by Dempsey Proton Racing with the Porsche Young Professional Matteo Cairoli (Italy) who celebrates his debut at the world famous long-distance classic. Patrick Long (USA), as another Porsche factory driver, competes for the Proton Competition customer team, fielding two 911 RSR. The third customer squad is Gulf Racing.

Comments on the pre-test

Fritz Enzinger, Vice President LMP1: “Now Le Mans 2017 is on. The return to the Sarthe definitely brings back the nicest memories for us. Of course, we would like to follow up on these recollections. The test result is difficult to read as we stuck to our plan and focussed on race preparation. On Tuesday, we’ll have a roll-out with the Le Mans cars here on the Circuit Bugatti. Afterwards the majority of the team will be sent home to take a deep breath before we return and enjoy the hype at scrutineering next Sunday in the Le Mans town centre.”

Andreas Seidl, Team Principal: “We’ve had a mixed test day. We were focussing on race set-up and refrained from simulating qualifying. Although we didn’t achieve the mileage we wanted, we still learnt important lessons for the race regarding tyre choice and tyre wear. Toyota’s speed was impressive, we could not match that. In the coming days we will analyse today’s data and draw our conclusions to improve our cars’ performance. We unfortunately lost a lot of test time with our number 2 car. Due to an oil leak we had to change the combustion engine over lunch. At 3:38pm, after only two-and-a-half hours repair time, the car was back on track. What caused the leak is still to be analysed but the team did a great job. Now we go full throttle on the road to the Le Mans race week.”

Dr. Frank-Steffen Walliser, Vice President Motorsport and GT Cars: “The first tests at Le Mans with the new 911 RSR were very clearly on the tyre situation and the setup. After the first laps our drivers provided us with a very encouraging feedback. The car feels good, the drivers feel comfortable, the 911 RSR responds logically to all our set-up changes. Right from the start everything ran according to plan. The fast lap times gave us a good comparison to our simulations and an insight into the grip conditions on this non-permanent racetrack. We now know where we stand, even if not exactly how we compare to the competition. This is because today’s testing programmes were simply too different.”

The race takes off on Saturday, 17 June, at 15.00 hrs CEST. The FIA WEC App is free in its basic version. For a fee, the App offers a live stream of the entire race plus live timing.