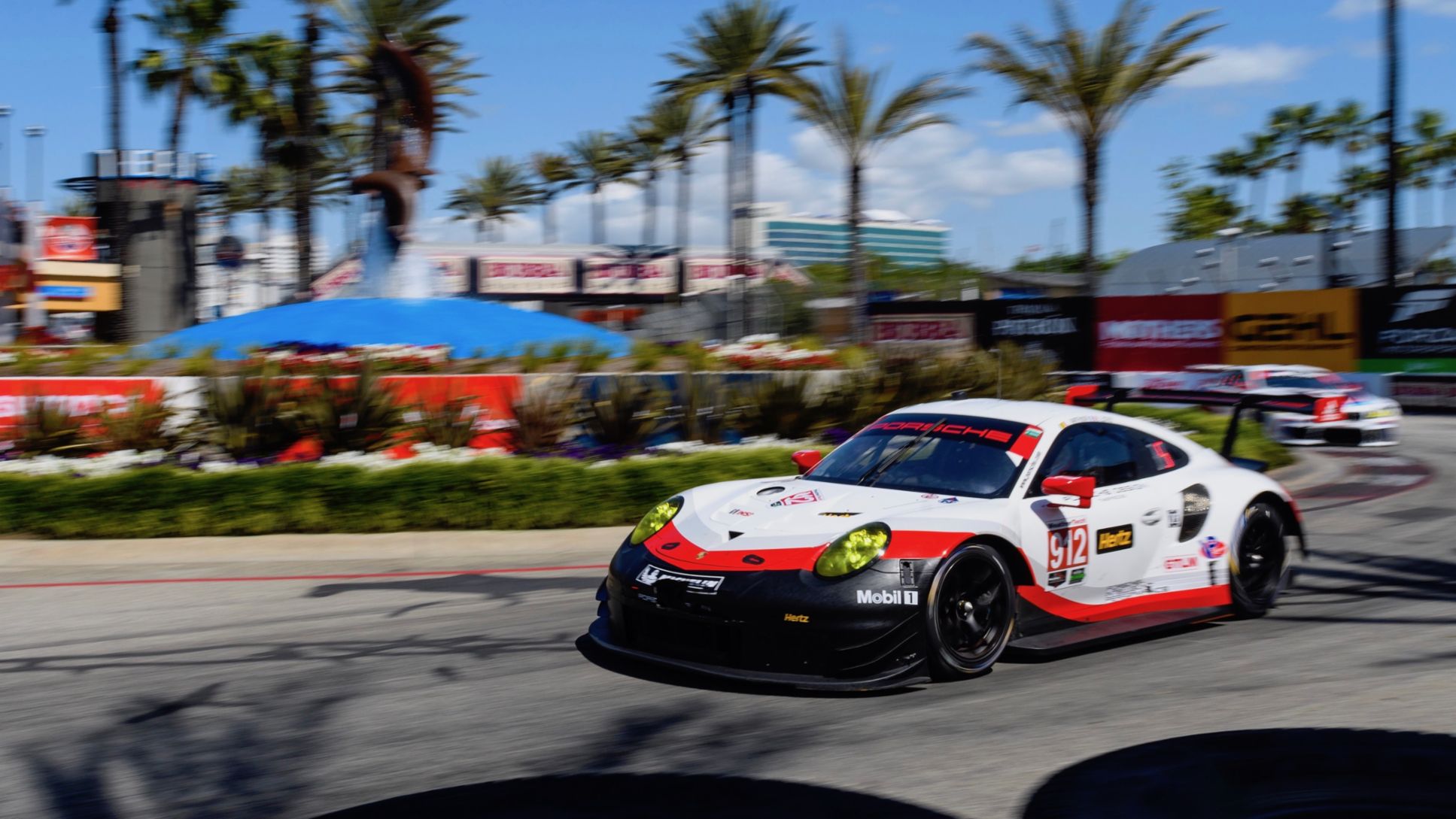 At the Grand Prix of Long Beach, the new Porsche 911 RSR has claimed its second podium result at its third race in IMSA SportsCar Championship.

On the spectacular city course in the port district, where the pits are just a stone’s throw away from where the docked ocean-liner giant “Queen Mary” lies anchored, Laurens Vanthoor (Belgium) and Kévin Estre (France) secured third place on Saturday with the #912 car. In the sister 911 RSR fielded by the Porsche GT Team, last year’s winner Patrick Pilet (France) and Dirk Werner (Germany) finished sixth. At the season-opening round at the 24 Hours of Daytona, they came second.

The race set against a postcard-perfect backdrop of sun, sea and palms is regarded as the American equivalent to the Monaco Grand Prix for good reason. Despite the short race duration of just 100 minutes, the completely walled and fenced 3.167-kilometre street circuit demands everything from the drivers, and on the grandstands and balconies of high-rise apartments, keen sports car fans mingle with famous stars. The simple reason for the high number of prominent celebrities is that Hollywood is virtually just around the corner.

Kévin Estre kept his cool just before the finish line

The race was as spectacular as the backdrop. After just one lap, the leading trio in the particularly competitive GTLM class clashed – which opened the door for Laurens Vanthoor. Taking up the race from the fourth grid spot, the Belgian, who as the winner of the 2016 Macau Grand Prix is no stranger to narrow city circuits, moved into the lead. Vanthoor held onto the top spot for almost 45 minutes until the first pit stop – no other GTLM vehicle stayed out on the track as long without a tyre change.

It was only while handing the 911 RSR off to Kévin Estre that the position was lost. Running in fifth place, the Frenchman then took up the chase again. In the final laps of a race that had seen no less than five safety car phases, events turned truly dramatic: Kévin Estre advanced to fourth place and kept his cool in the hairpin just before the finish line: In stop-and-go traffic he overtook another competitor in the last seconds to secure the second podium result for Porsche in North America’s premier racing series.

A spirited drive and a drive-through penalty

In the second 911 RSR with the starting number 911, two former Long Beach winners had to line up at the back of the field: Patrick Pilet (2016) and Dirk Werner (2015) were unable to take part in the qualifying session due to an accident during practice and were therefore relegated to the very back of the 35-strong field. Putting in a spirited drive, Patrick Pilet ploughed his way through the pack and as he came into the pits he was running in eighth position. Dirk Werner gained another four places during his stint and was even looking good for a podium spot. However, a drive-through penalty imposed by the stewards of the meeting for making contact with another competitor put a sudden halt to his charge.

In the GTD class, Park Place Motorsports with Jörg Bergmeister (Germany) in the 911 GT3 R finished on fourth place as the best Porsche customer team. His works driver colleague Wolf Henzler (Germany) took the flag in the 911 GT3 R of the TRG squad in fifth. Fielded by Alegra Motorsports, the customer sport racer, which Porsche had designed for worldwide GT3 series based on the 911 GT3 RS production sports car, secured a class win at round one at the Daytona 24-hour race.

Dr Frank-Steffen Walliser, Head of Porsche Motorsport: “It takes a while to digest such a race. It was turbulent and difficult to keep oversight. Finishing in third place at the end was pretty good. Still, you’re left feeling that there could have been more. Thanks to a good strategy and fast pit stops we managed to gain ground, particularly with our number 911 car, which had started from the very back. But because of the drive-through penalty it wasn’t enough for a podium result. Congratulations to our customer team Park Place Motorsports, who was rewarded with fourth place for its strong pursuit after a spin in the first lap.”

Marco Ujhasi, Overall Project Manager GT Works Motorsport: “That was a crazy race with highs and lows. We suffered a setback on Friday when our number 911 car was damaged during practice. But the team worked brilliantly to repair the car in time to compete. The race started turbulently. We were able to take the lead at a relatively early stage, which suited our strategy perfectly. At the next safety car phase we then split the strategy, like most other teams, and that also worked well. As far as the result is concerned, we definitely did the best we could under the circumstances. But no one needs such a rollercoaster of feelings every weekend.”

Patrick Pilet (911 RSR #911): ““That was a dramatic race with a lot of incidents. The safety car had to be deployed often. There were a lot of collisions and drive-through penalties. And then the front-runner loses the race in the final lap because several cars didn’t make it around the bend. That’s pretty crazy.”

Dirk Werner (911 RSR #911): “Patrick got us back in the race with great overtaking manoeuvres. We were lucky with the caution phases and by mid-way through the race we were already running in the top four. But then we were handed a drive-through penalty and our fight for a podium spot was over. It’s a shame for the team who worked so hard through the night to repair our 911 RSR. Those guys certainly deserved a better result.”

Kévin Estre (911 RSR #912): “It was a difficult race. We actually did everything right with our strategy. We were leading, but then lost places due to the many safety car phases. In my first lap I was hit quite hard in the rear. After that I had hardly any downforce, but I kept fighting and was rewarded in the bizarre final lap.”

Laurens Vanthoor (911 RSR # 912): “We actually didn’t expect to be on the podium. But we’re happy to take it home. My teammates told me a lot about Long Beach, but I hadn’t expected it to be quite so turbulent here.”

Round four of the IMSA SportsCar Championship will be contested on 6 May at the Circuit of the Americas in Austin/Texas.