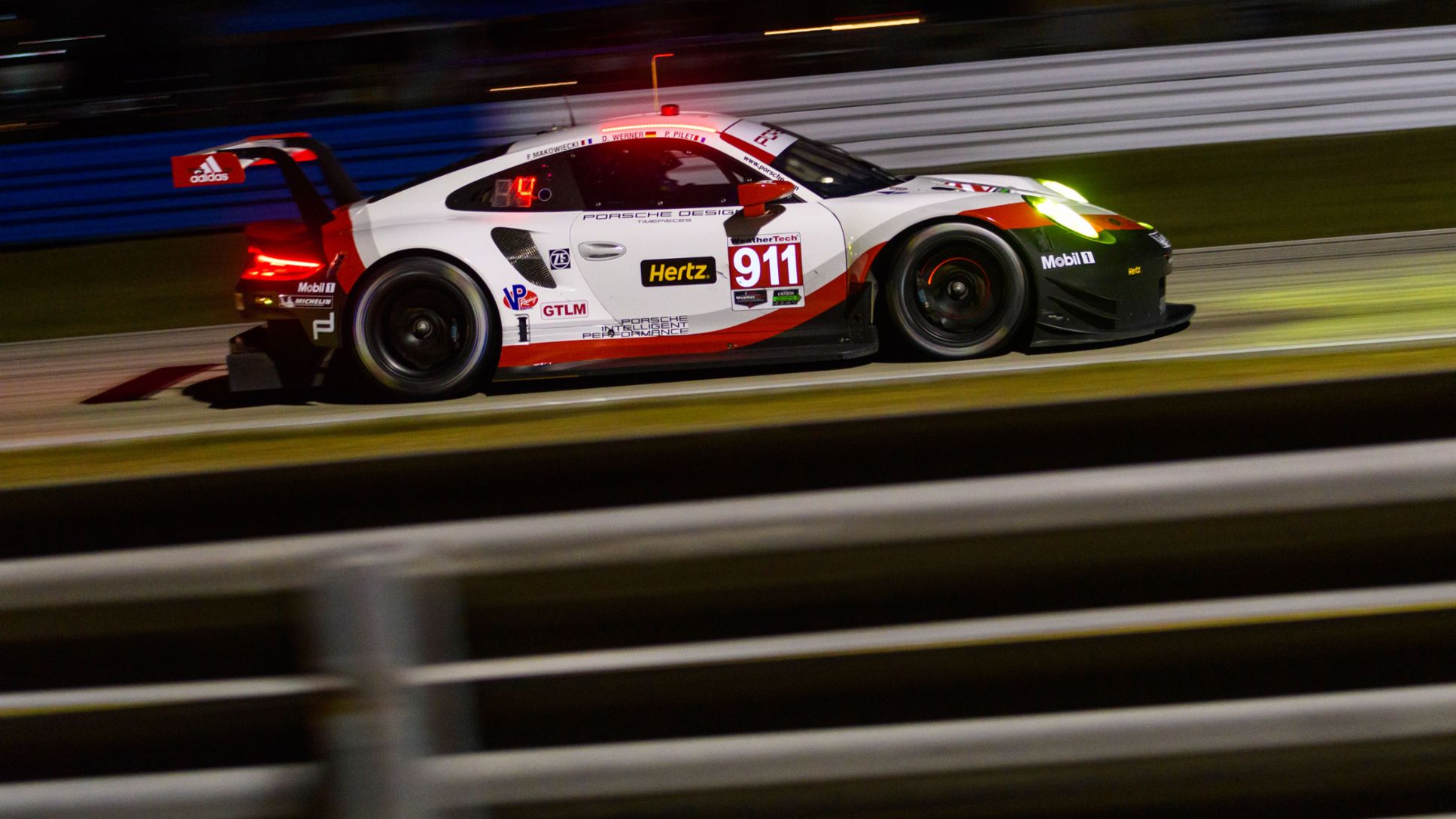 The new Porsche 911 RSR have secured good starting positions for the 12 Hours of Sebring: The Porsche GT Team-campaigned race cars from Weissach take up the oldest sports car race in the USA from the second grid row of the GTLM class on Saturday.

In qualifying for round twoce of the IMSA SportsCar Championship season, which is contested on the 5.954-kilometre Sebring International Raceway, Kévin Estre (France) posted the fourth quickest time in the 911 RSR with the starting number 912. His teammates for the race are Laurens Vanthoor (Belgium) and Richard Lietz (Austria). In the second 911 RSR, Dirk Werner (Germany) starts from the seventh grid spot. For the race on the airfield circuit in the heart of Florida, Werner shares driving duties in the number 911 vehicle with Frenchmen Patrick Pilet and Frédéric Makowiecki.

Marco Ujhasi, Overall Project Manager GT Works Motorsport: “Sebring is always a challenge. It’s very difficult to turn really quick laps here with a new car. Dirk and Kevin did a super job and our expectations have been fully met. A very positive development was that Dirk drove his fastest lap at the end of the qualifying session on worn tyres. We’re looking forward to Saturday and we’ll be attacking hard.”

Kévin Estre (911 RSR #912): “The second grid row is good for us. We can be pleased with this. Our 911 RSR was well balanced and fast. In the first lap I pushed a little too hard and made a minor mistake. But then I drove faultlessly on the second lap, although I was a little slower due to the deteriorating tyres.”

Dirk Werner (911 RSR #911): “I haven’t driven a qualifying session in a Porsche for a long time. Compared to free practice, the track had changed noticeably and was somewhat more difficult to drive on. I didn’t really get a perfect lap in, however the gaps are very close. Seventh on the grid is a good starting position for the race, especially when you consider the pace of our 911 RSR.”

The race is as legendary as its winners. Immortalised on the winners’ list are racing greats such as Juan Manuel Fangio, Dan Gurney, Hans Hermann, Jacky Ickx and Mario Andretti. Hollywood stars Paul Newman and Steve McQueen, who finished second overall in 1970 with a Porsche 908, have also fulfilled their racing dreams on the Sebring International Raceway. Built on a former military airfield, the circuit with its 17 corners is 5.954 kilometres long and hosted the inaugural race on 31 December, 1950.

Six Porsche works drivers contest the GTLM class with the new 911 RSR for the Porsche GT Team. Sharing the cockpit of the #911 vehicle are Patrick Pilet (France), Dirk Werner (Germany) and Frédéric Makowiecki (France), who kicked off the season with second place at Daytona. In the #912 car are Laurens Vanthoor (Belgium), Kévin Estre (France) and Richard Lietz (Austria). In the GTD class, two other works drivers compete for Porsche customer teams with the 911 GT3 R: Daytona winner Michael Christensen (Denmark) for Alegra Motorsports and Jörg Bergmeister (Germany) for Park Place Motorsports.

The 911 RSR, which celebrated its race debut in January at Daytona, is a completely new development: the suspension, body structure, aerodynamic concept, engine and transmission have all been designed in Weissach from scratch. Depending on the size of the restrictor, the motor, which is now positioned in front of the rear axle, puts out around 375 kW (510 hp). Thanks to the particularly large rear diffuser combined with a top-mounted rear wing, the level of downforce and the aerodynamic efficiency were significantly improved. The new factory design of the 911 RSR with the basic colours white, red and black has further developed the clear and dynamic design language of Porsche Motorsport. The 911 GT3 R celebrated its race debut a year ago in Daytona mounted with the new ultra-modern, four-litre, flat-six engine with direct fuel injection. Porsche had designed the more than 368 kW (500 hp) customer sports racer for worldwide GT3 series on the basis of the 911 GT3 RS production sports car.

Porsche is the manufacturer with the most Sebring victories. The first of 18 outright victories for Porsche on the Sebring International Raceway came in 1960 courtesy of Hans Herrmann and Olivier Gendebien in the Porsche 718 RS/60. The most recent overall win in 2008 was clinched by Timo Bernhard, Romain Dumas and Emmanuel Collard with the Porsche RS Spyder. Porsche’s list of successes also includes no less than 70 class wins at this race. The most recent success was in 2015 with the Porsche 911 GT America fielded by the Alex Job Racing customer team. Prior to that, in 2014, Jörg Bergmeister, Michael Christensen and Patrick Long scored class victory at the wheel of a Porsche 911 RSR.