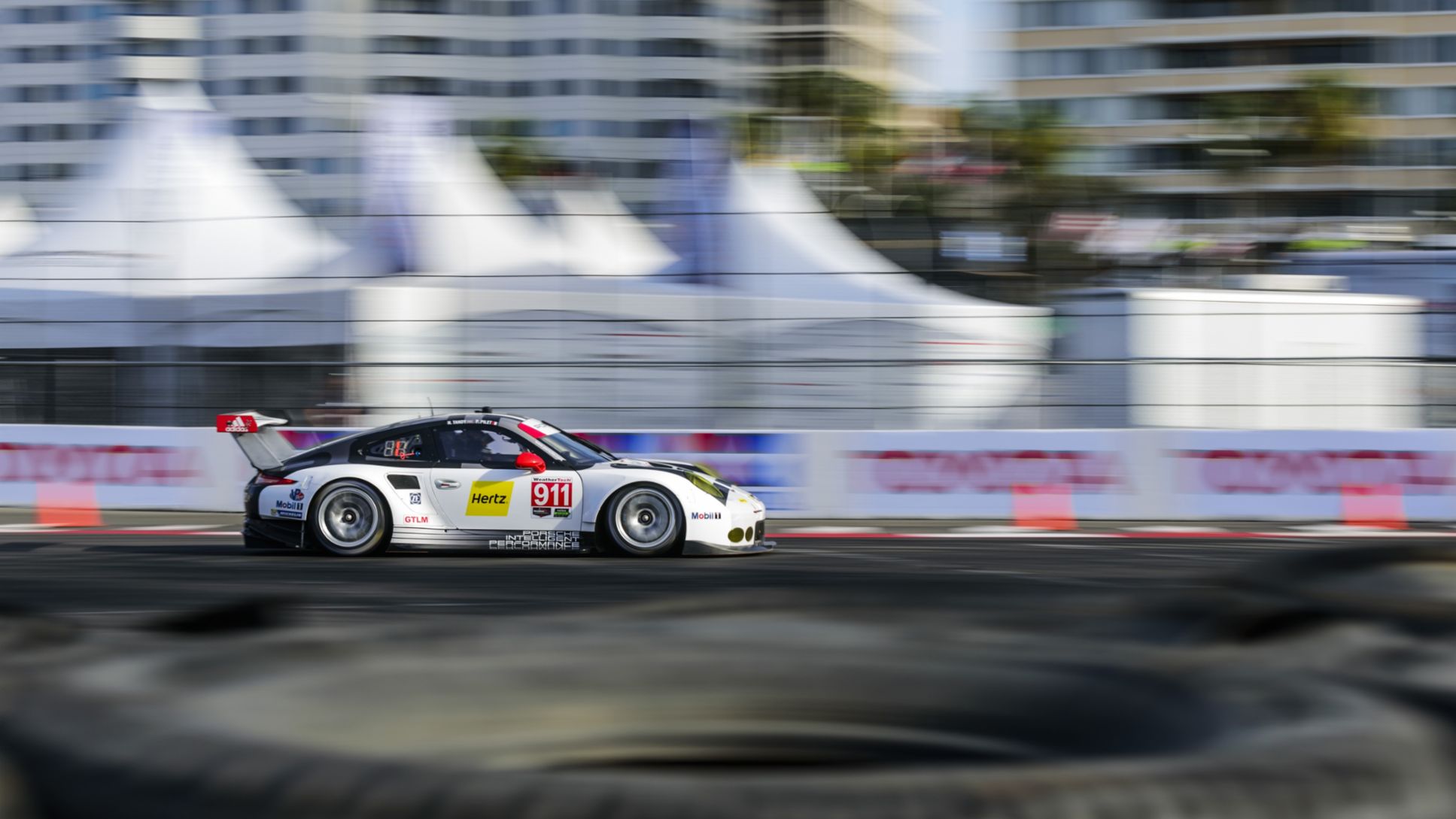 After the break in racing due to the 24 Hours of Le Mans, the IMSA SportsCar Championship picks up the pace again. One of the most storied sports car races in America will be contested on 3 July in Watkins Glen.

As the defending champions in the GTLM class, the most well-supported category with five manufacturers, the Porsche North America factory team campaigns two Porsche 911 RSR in the only six-hour race on the calendar of North America’s most important sports car racing series. The most successful GT car of the 2015 season was based on the seventh generation of the iconic 911 sports car and last year celebrated a double victory at Watkins Glen. This race counts towards the North American Endurance Cup, a competition also encompassing Daytona, Sebring, and Petit Le Mans. Porsche currently leads this special long-distance category.

The 5.472-kilometre-long Watkins Glen International racetrack, nicknamed by experts and fans as “The Glen”, is located in the US State of New York. It was built around a forested hilltop and opened in 1956. From 1961 to 1980 the Formula 1 circus also pitched its tents near the tranquil town of Watkins Glen for the United States Grand Prix.

Driving the Porsche 911 RSR with the starting number 911 is the reigning IMSA GT Champion Patrick Pilet (France) and Nick Tandy (Great Britain) who scored their first win of the season at Long Beach in April. At the wheel of the #912 contender are Earl Bamber (New Zealand) and Frédéric Makowiecki (France). Last year the duo clinched second at Watkins Glen. So far this year they have netted third place at the rounds in Daytona, Sebring and Laguna Seca. The fifth works driver at Watkins Glen is Jörg Bergmeister (Germany) who competes for the Porsche customer squad Park Place Motorsports.

For 2016, the winning racer from Weissach received modifications to the aerodynamics to comply with the new regulations. The position of the rear wing was moved further to the back, with the rear diffuser now considerably larger. Moreover, the fastest ever nine-eleven received a new factory design. The 911 GT3 R was built by Porsche based on the 911 GT3 RS production sports car. In January 2016, it celebrated its racing debut at Daytona mounted with the new, ultra-modern, four-litre flat-six engine with direct fuel injection. The first win in the IMSA SportsCar Championship the 911 GT3 R took at Laguna Seca.

The six-hour race takes off on Sunday, 3 July, at 10.10 hours local time (16.10 hours CEST) and will be broadcast live outside the USA on www.imsa.com.

Dr Frank-Steffen Walliser, Head of Porsche Motorsport: “After Le Mans we’re now turning our attention to another classic – this time in the USA: The traditional six-hour race in Watkins Glen is an important chapter in America’s sports car racing history and every year it poses a new challenge. With the extension of our successful partnership with CORE Autosport in Le Mans we have set the tone and the course for the future in the popular IMSA SportsCar Championship. This is sure to be an additional motivation at Watkins Glen, as well.”

Marco Ujhasi, Overall Project Leader GT Works Motorsport: “Given that the Watkins Glen racetrack now has a new surface it was important that we went testing there prior to the race. Despite the whole timing pressure with Le Mans, we did this. Thanks to Patrick and Earl we were able to collect a raft of useful data and experiences, which we will use in the setting up of our 911 RSR for this demanding circuit.”

Patrick Pilet (911 RSR #911): “A year ago when Porsche clinched all GTLM-class championship titles we hadn’t won any races prior to Watkins Glen. This time we’re travelling there with the Long Beach win under our belts. Everything is running according to plan. In the rain race of 2015 I got away well and immediately took the lead. I’d also like to do this again this year – regardless of whether it’s wet or dry.”

Nick Tandy (911 RSR #911): “It’s great that the season continues at last for us in the USA after a two-month break. I love traditional racetracks like Watkins Glen. Legendary drivers like Jim Clark and Graham Hill have won Formula 1 races here. It’s also a great pleasure to drive our 911 RSR on this circuit.”

Earl Bamber (911 RSR #912): “It bucketed down last year in Watkins Glen. That was a really crazy race. I got the chance to test on the new track surface recently. The grip is definitely better, and there are sure to be faster lap times in the race. Fans can look forward to some exciting duels.”

Frédéric Makowiecki (911 RSR #912): “So far this season we’ve contested four races in the United States – and we finished three of them on third place. I think it’s time for the first victory. Our team used the Le Mans break to test on the Watkins Glen circuit. That was important because the track has been resurfaced. We’re heading into the race well prepared.”

Jörg Bergmeister (911 GT3 R #73): “Watkins Glen is a real sports car classic in the USA and for me a highlight of the IMSA SportsCar Championship. The weather can play a decisive role, it’s often very changeable in this region. But I’m sure that we have good chances in dry and wet conditions.”