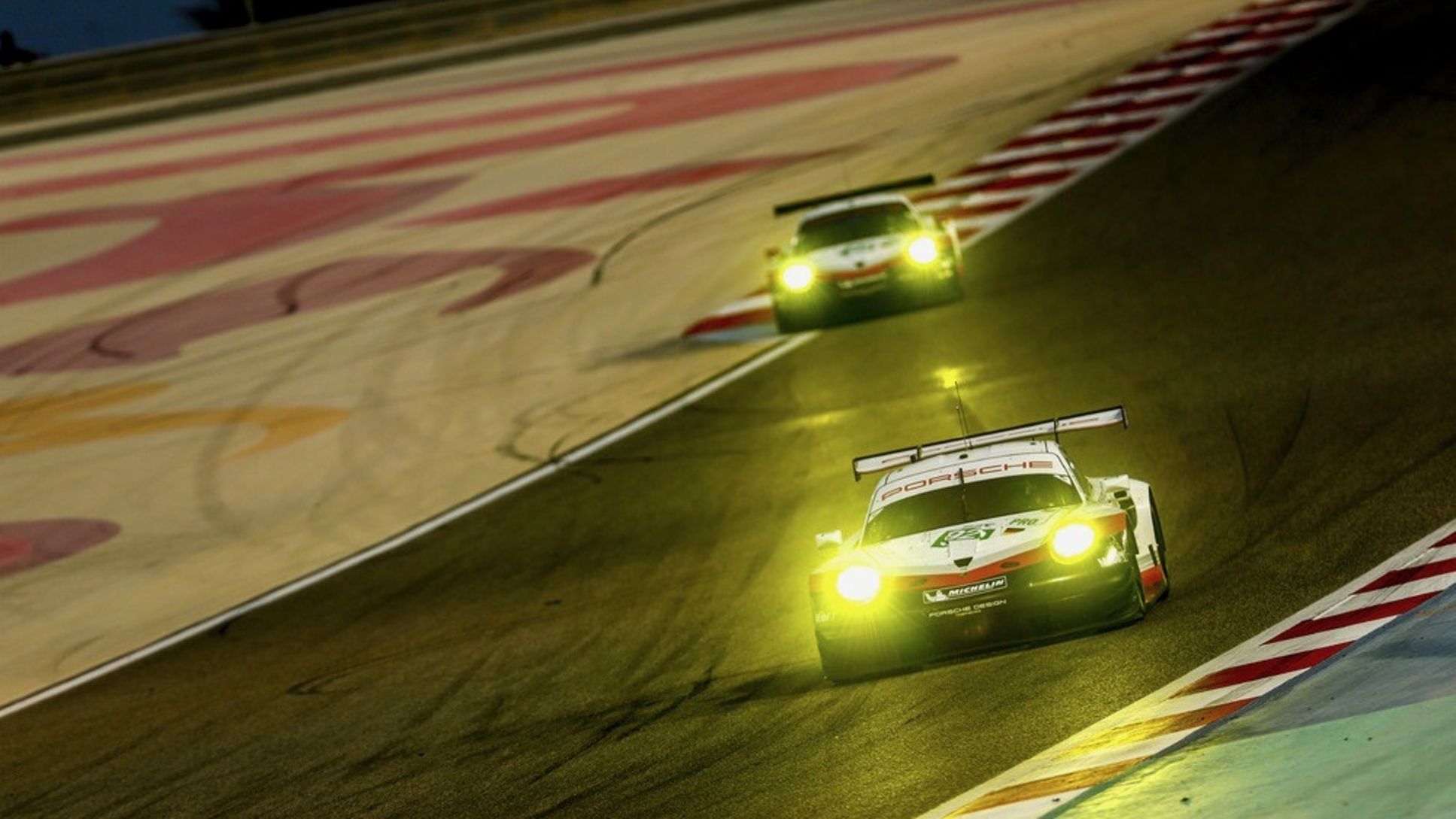 At the six-hour race on the Bahrain International Circuit, Richard Lietz and Frédéric Makowiecki secured second place in the Sports Car World Endurance Championship WEC. With this race one of the most successful chapters of Porsche’s motorsport history comes to an end.

With the Porsche 911 RSR, Richard Lietz (Austria) and Frédéric Makowiecki (France) finished fourth in the GTE-Pro class at the season finale in the desert. For Michael Christensen (Denmark) and Kévin Estre (France), who were on course for victory after running at times in the lead, all hopes were dashed after they became entangled in a collision caused by another competitor.

On the 5.407-kilometre Grand Prix circuit close to Manama, the capital of the Persian Gulf kingdom, the two 911 RSR made a somewhat cautious start to the last race of the year. Only when the engineers sent the #91 vehicle with Kévin Estre at the wheel back out on the racetrack with a new tyre strategy after the first pit stop did the 911 RSR demonstrate the desired performance. Pulling out all stops, the Frenchman overtook two Ferraris in a spectacular overtaking manoeuvre and worked his way up the field one position after the other. After two hours he had snatched the lead. His teammate Michael Christensen rejoined the race in third place, moved up into second and set his sights on the frontrunner. However, after half the distance, an LMP1 Toyota squeezed past the 911 RSR in the blind spot and roughly shunted the Porsche into retirement. All prospects of the new GT spearhead from Weissach claiming its maiden victory in the world championship were destroyed.

As spectators in the pits, Michael Christensen and Kévin Estre had to watch how the fight for victory played out without them. However, their team colleagues Richard Lietz and Frédéric Makowiecki jumped into the breach for them. After a weak start which saw the two at times running at the back of the GTE-Pro field, the title aspirants in the #91 Porsche 911 RSR gathered momentum. With 90 minutes left to the flag, Frédéric Makowiecki had fought his way through to sit second behind the leading Ferrari. However, in the last hour of racing, he was unable to maintain this level of performance. Despite his determined efforts to defend his position, he ultimately had to let the second Ferrari and then a Ford pass him. He didn’t, however, relinquish the runner-up spot in the drivers’ classification of the world championship as reward for the strong performance of the entire team this season and particularly at this gripping final race of the season.

For the Porsche customer team, Dempsey Proton Racing, the Porsche Junior Matteo Cairoli (Italy), Christian Ried and Marvin Dienst (both Germany) concluded the season on second place in the FIA World Endurance Trophy. In Bahrain they took the flag as fourth in the 2015-spec 911 RSR, with which they had won this year’s GTE- Am class races at the Nürburgring and in Mexico.

Dr. Frank-Steffen Walliser, Vice President Motorsport and GT Cars: “We were only narrowly beaten in the debut season of the 911 RSR. Like the last race of the season, all the other races in the GTE-Pro class were extremely competitive. Spectators were treated to truly spectacular racing. Unfortunately, our number 92 car was often hit by competitors. In 2018 we’ll return with the goal of winning the world championship. Congratulations to our Dempsey Proton Racing customer squad for securing second place in the drivers’ classification of the FIA Endurance Trophy.”

With two podium finishes at the last round in Bahrain, the Porsche LMP Team bid a fond farewell to the FIA World Endurance Championship. Drivers Earl Bamber (NZ), Timo Bernhard (DE) and Brendon Hartley (NZ), who were crowned world champions two weeks ago, finished second in what was an incident filled and highly emotional 2017 finale. This year’s Le Mans winners dropped behind after an early incident but impressively fought back. The sister car, shared by Neel Jani (CH), André Lotterer (DE) and Nick Tandy (GB) started from pole position but also suffered a set-back after a collision and a subsequent penalty. Lotterer clocked the fastest race lap and finished in third position after six hours of racing. Toyota won the night race.

With this race, that was green flagged by Matthias Müller, Chairman of the Executive Board of Volkswagen AG, one of the most successful chapters of Porsche’s motorsport history comes to an end. From 2015 to date, the Porsche LMP Team took three consecutive Le Mans outright victories plus three successive manufacturers’ world championship titles while Porsche 919 Hybrid drivers won the drivers’ world championship title on three occasions. Since the 919’s debut in 2014, the tally from 34 races is 17 wins with seven of them being one-two victories. Furthermore 20 pole positions and 13 fastest race laps were achieved.

Oliver Blume, Chairman of the Executive Board of Porsche AG: “No other Porsche team has ever managed three Le Mans outright victories in a row but this squad achieved it. I thank them very much for this. I’m extremely proud of every single team member. They have mastered a mammoth task with hard work, consistency and the right approach. To me this represents the Porsche spirit that our brand stands for spanning almost 70 years. Now the team of Fritz Enzinger and Andreas Seidl face its new challenge: to enter Formula E for season number six at the end of 2019.”

Michael Steiner, Board Member for Research and Development at Porsche AG: “An era comes to an end with the last race entry of the Porsche 919 Hybrid. We have often shown in our company’s history that inventiveness, experience and courage can make a highly complex and successful race car. The 919 achieved almost everything possible in its four years and demonstrated the predominance of hybrid power. The combination from a highly efficient combustion engine and a powerful electric drive reached a new level with the 919 Hybrid. We consequently follow this path with our road sports cars.”

Start driver Neel Jani – who just like Timo Bernhard did all four Le Mans starts for the team as well – stays in front of the Toyotas on the first lap and also at the restart after a safety car period at the end of lap 5. But on lap 19 he cannot hold the number 8 Toyota anymore and on lap 20 he also gets passed by the number 7 Toyota. After 30 laps Jani comes in for refuelling, currently third in the race. He continues in P2 because the number 7 Toyota changes driver and tyres but gets passed again by that car on lap 48 due to its fresher tyres. Still in P3, Jani hands over the car to Nick Tandy after 61 laps. The Brit refuels after 92 laps, jumping the number 7 Toyota who pitted for a full service. Still in P2, he stops for fuel again after 124 laps, refraining from a tyre change and takes the lead. But only six laps later, a collision when lapping a slower car causes a front left puncture. Tandy limps to the pits, the car’s front end gets changed and André Lotterer jumps in with 131 laps completed. After 161 laps, he serves a stop and go penalty for Tandy’s collision and after 162 laps, stops for fuel and a tyre change. Near the end of the race on lap 193, Lotterer has his final splash and dash before he brings the car home – one lap down to the leader – when the Toyota takes the chequered flag after 199 laps.

Timo Bernhard improves from third to second at the start but on lap three runs over a bollard that lies on track. The bollard gets stuck underneath the car but was not obvious during the safety car period. At the end of lap seven, Bernhard pits to get the bollard removed and the nose changed, taking on fuel as well. He loses almost one lap. After 37 laps, running fourth, he hands over to Brendon Hartley. He refuels after 68 laps, still in P4. During a “Full Course Yellow” at the end of lap 96 he hands over the car to Earl Bamber who gets fresh tyres and improves to P3 because the number 7 Toyota is being repaired after a collision. He refuels after 127 laps and continues in P3. With 150 race laps completed, Bernhard gets back into the car. He refuels after 177 laps for the last time. The driver who did the initial laps with the very first test chassis of the Porsche 919 Hybrid back in 2013 also covers the last miles. One lap down to the race winner, he comes home in second place.

Fritz Enzinger, Vice President LMP1: “Today a very successful era comes to an end and this is the right time to say thank you. Foremost I want to thank the Board who had the faith to give me the project, supported me a lot and always gave me the feeling I was the right choice. Personally, I was only convinced about this when we took our first race win in São Paulo back in 2014. Thanks to all our drivers who took every chance and delivered the highest performance. Finally, it was 17 wins in 34 races. Thanks to everybody in the team for their relentless work and euphoria for the project. There was nothing I enjoyed more than seeing the instinct to win in their eyes on race days! Today is also the right time to pay my gratitude to our Team Principal Andreas Seidl: For the last two years, Andreas mastered the dual role of Team Principal and Technical Director in a superior manner with the first 919 that was developed under his guidance winning the world championship. And finally: It is great a company like Porsche exists. If I had to put the six years I’m with Porsche in one sentence it would be: I was allowed to live my dream. Thanks for the project and thanks for the freedom of scope.”

Andreas Seidl, Team Principal: “Over the past four seasons, Toyota has been an incredible competitor, and I congratulate them on today's victory. Thanks to the whole team here and in Weissach, to our drivers and partners for four sensational years. This definitely was the last race for the 919 Hybrid. We are very proud of the success we were able to achieve with this technology driven car. Next year we will celebrate these innovations with some very special events. But these details will be unveiled at a later date. “