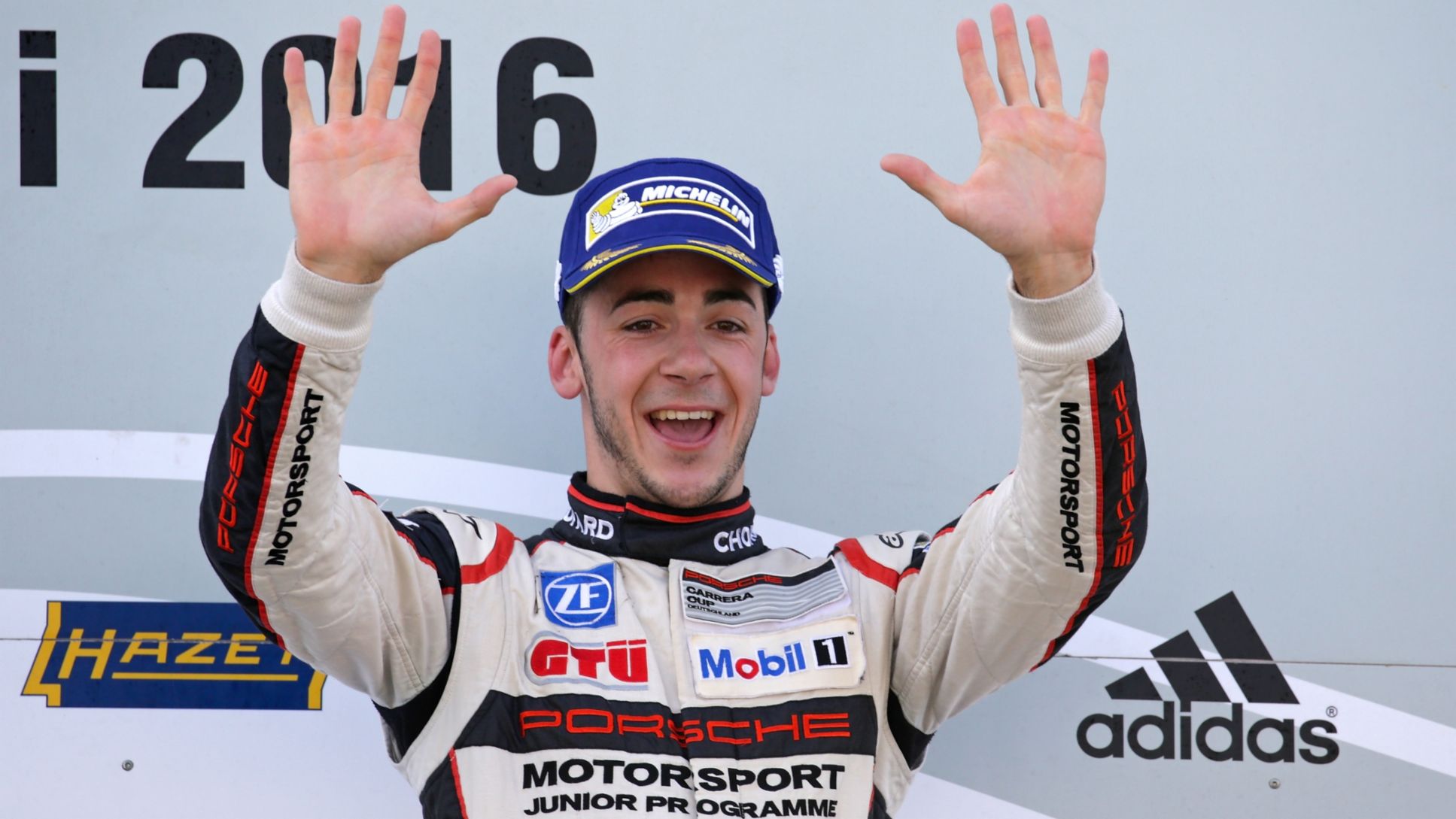 Sven Müller has won his ninth and tenth victory at the Porsche Carrera Cup Deutschland. The 24-year-old has scored on Saturday and has dominated the Sunday’s race in Zandvoort.

This season’s Porsche Carrera Cup Deutschland is dominated by a serial winner: From twelve races so far this season, Germany’s Porsche Junior Sven Müller (Konrad Motorsport) has notched up his tenth win on Sunday in Zandvoort. With this impressive performance, the 24 year old has set a new record: No other driver has managed to win ten times in one season of the Porsche Carrera Cup Deutschland. “I’m thrilled with this record. Today’s race was extremely exciting and I had to defend my lead over the entire distance. My grid spot was slightly damp, but I still got away perfectly off the line. Tyre wear is very high at Zandvoort and therefore I had to be easy on the tyres. This worked and I could bring home another victory,” said Müller, who struggled all weekend with cold symptoms. In a repeat of Saturday’s results, positions two and three went to Jeffrey Schmidt (Team Lechner Huber Racing) from Switzerland and Germany’s Christian Engelhart (MRS GT-Racing).

Schmidt, who had planted his black and red Porsche 911 GT3 Cup on pole position for both races this weekend, took off from the first grid row next to Müller. Müller got away perfectly at the start and got the jump on Schmidt. During the 19-lap race, Schmidt put the leading Müller under pressure and stayed glued to the Konrad pilot’s rear bumper. After a short safety car phase to salvage a race car, Schmidt managed to maintain contact and close the gap to 0.1 seconds. However, the Porsche-supported junior, Müller, defended his lead and netted his tenth victory. “It’s incredibly difficult to overtake on this racetrack. With my start I had problems again getting it right with the clutch and I didn’t get away very well. Sven overtook me. Unfortunately I couldn’t achieve a win today and therefore I’m only 50 percent happy,” explained Schmidt.

The 4.307-kilometre racetrack on the Dutch North Sea coast was still damp in the early morning after a light rain fell two hours before the start of the race. As the vehicles lined up on the grid, the skies cleared and with an air temperature of 19 degrees Celsius and a track temperature of 21 degrees the conditions were good. While Müller and Schmidt pulled clear of the field, Engelhart, who started from third, had to fend off his pursuers. Porsche specialist Engelhart used his wealth of experience and kept Porsche Junior Dennis Olsen (N/Team Lechner Huber Racing) at bay: “The race was a defensive battle. We were the only ones in the front runners without new tyres. I noticed this especially in the first lap. But ultimately I earned all-important points. I can be satisfied with two podium results this weekend.”

Olsen finished fourth behind Engelhart. “I passed Luca Rettenbacher in the first lap, but then I got stuck behind Christian. With my setup I clocked top lap times until half way through the race, but I had no answer to Christian,” declared Olsen. Luca Rettenbacher (A/Konrad Motorsport) came fifth, with David Kolkmann (D/Rookie Team Deutsche Post by Project 1) taking the flag in sixth place.

Wolfgang Triller has scored the first title in this year’s series. With four races left on the calendar, the amateur pilot from Lower Bavaria has proved unbeatable with nine victories in the B-classification and is delighted with his achievement: “My Huber Lechner Racing team did a perfect job. We made no mistakes and I didn’t retire once. What I particularly enjoy is the friendly atmosphere. The drivers swap data analyses and we have a lot of fun together.” The team thanked Triller by showering him with two bottles of champagne.

After twelve of 16 races, Müller ranks first in the overall classification with 221 points. Engelhart (197 points) lies second after one victory and ten podium results. In third place is Olsen with 182 points, who also leads the rookie classification. As the newly-crowned winner of the amateur championship, Triller has 232 points to his credit. Konrad Motorsport (343 points) leads the team classification ahead of Lechner Huber Racing (321).

Porsche Junior Sven Müller extends his championship lead after pocketing his ninth win of the Porsche Carrera Cup Deutschland on Saturday. At the wheel of his Porsche 911 GR3 Cup run by Konrad Motorsport, the 24-year-old won the eleventh race of the German one-make race series. With a gap of 0.2 seconds, the German relegated Jeffrey Schmidt (Team Lechner Huber Racing) from Switzerland to second. Christian Engelhart (D/MRS GT-Racing) occupied the third podium spot after Saturday’s race. “In European nine-pin bowling we call this a strike. I’ve won nine of eleven races. The finish today was rather confusing because as I drove over the finish line the organiser forgot to wave the chequered flag. I’m very happy about my first ever win at Zandvoort,” said Müller.

In the 9am qualifying session, Schmidt posted pole position on 4.307-kilometre dune circuit. Müller got a better jump off the line and pulled next to Schmidt. As the pair turned into the first corner, Müller was a nose ahead. Although the German held on to his lead over the 14 laps, Schmidt kept his rival under pressure and managed to close the gap to the frontrunner to 0.7 seconds. By the end of the race the Swiss had almost caught the German, but with the absence of the chequered flag, the pair raced on to the next corner. Via radio, the Steward of the Meeting then clarified the misunderstanding and announced the end of the race: “When you start from pole you want to win. Unfortunately I didn’t manage it today because my start wasn’t great. At the end it was a little chaotic because we didn’t see the flag. I need to get off the line better on Sunday then perhaps I can win,” said Schmidt.

Scoring position three, Engelhart earned vital points towards the championship. “The most exciting part was the lap after the final lap. Everyone was overtaking because no one really knew if the race was still on or not. Such a situation is very rare,” explained Engelhart. Porsche junior Dennis Olsen (N/Team Lechner Huber Racing) finished fourth behind Engelhart: “My start wasn’t good at all and unfortunately I couldn’t make up any positions. I managed to stay with Engelhart early on but my driving took a toll on the tyres and ultimate I wasn’t able to maintain the pace.” Fifth place went to Britain’s Nicholas Yelloly (Rookie Team Deutsche Post by Project 1) with the Australian Nick Foster (AUS/KÜS Team75 Bernhard) concluding the race in sixth.

After eleven of 16 races, Müller leads the overall championship after nine victories with 201 points. Ranking second is Engelhart with 181 points. Olsen sits third with 168 points, which makes him the best rookie in the field. Wolfgang Triller (D/Team Huber Lechner Racing) leads the B-category for amateur race drivers with 212 points. Thanks to the good results of Müller and his Austrian teammate Luca Rettenbacher, Konrad Motorsport ranks first in the team classification.

Two YouTubers from “DailyMandT” were also at the track. They shared their experiences from the racetrack in a video-journal. The Porsche Carrera Cup Deutschland now enjoys a summer break. The championship rounds 13 and 14 will be contested on the Nürburgring from 9-11 September.