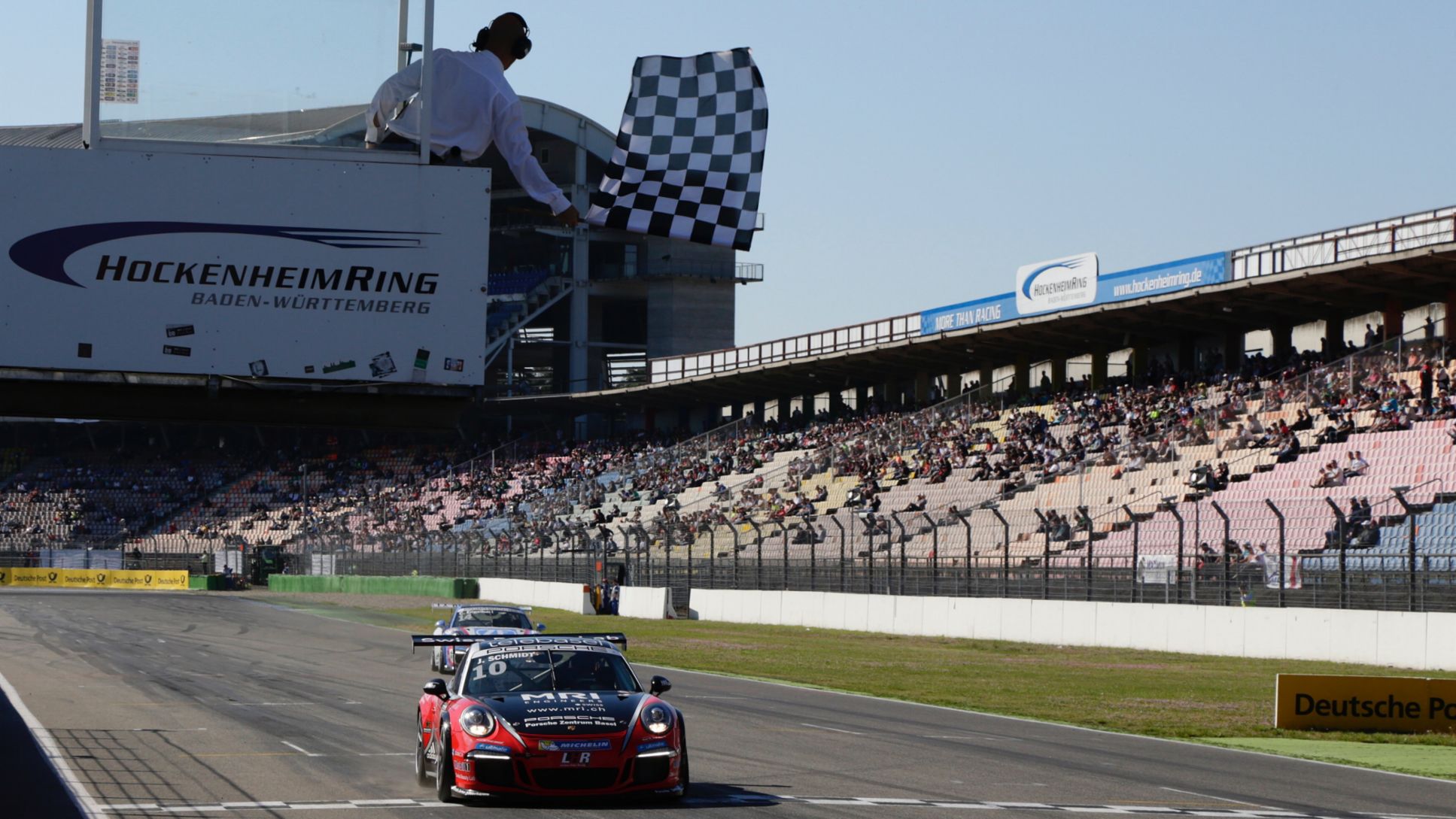 Schmidt and Müller win in Hockenheim

Jeffrey Schmidt has won round four of the Porsche Carrera Cup Deutschland on Sunday. Sven Müller has scored victory at Saturday’s race.

On the Hockenheimring Baden-Württemberg, the 22-year-old Jeffrey Schmidt from Switzerland relegated Christian Engelhart (D/MRS GT-Racing) and Porsche Junior Dennis Olsen (N/Team Lechner Huber Racing) to positions two and three on Sunday. “We didn’t start the season very well so I’m all the more pleased with my win today, and I’m also thrilled for my team, the newly-founded Lechner Huber Racing. The race seemed to go on for ages because when you’re alone at the front you have a thousand thoughts going through your head,” said Schmidt after he leapt out of his Porsche 911 GT3 Cup and, with a wide grin and full of elation, even clambered onto the roof.

Spectators were treated to a race with gripping fights for positions and a clear winner. As soon as the lights went off, Schmidt got the jump at the line and immediately past pole-sitter Engelhart. “On Saturday and again on Sunday I had a problem with my start,” explained Engelhart. “I can’t explain it; I’m actually really good at starts. The team and I need to analyse this.” The seasoned specialist from Germany was able to hold on to his second place, while two Porsche Juniors Sven Müller (D/Konrad Motorsport) und Dennis Olsen (N/Team Lechner Huber Racing) delivered a spirited duel behind him. In lap three Olsen got past Müller, who then tried repeatedly to overtake him over the 18 laps – with no success. “Unlike Sven I had fresh tyres and I could overtake easily. My goal was then to keep him behind me and that worked very well,” said Olsen.

Müller still retains the lead position in the overall classification

Earning three victories, Müller still retains the lead position in the overall classification with 74 points after four of 16 races. “My victory and a fourth place earned me some crucial points this weekend. I was running on fresh tyres today so I didn’t have the pace at the beginning,” analysed Müller. Behind him on second place in the standings is Engelhart with 63 points, followed by Olsen (56) who also leads the rookie classification. In the category for amateur racing drivers, Wolfgang Triller (Team Huber Lechner Racing) from Germany currently ranks first.

Prominent guests travelled to Hockenheim to hand over the trophies: Albrecht Reimold, Member of the Executive Board for Production and Logistics, as well as Porsche brand ambassadors Marcel Nguyen and Richy Müller presented the winners with their prizes. YouTuber Luca (ConCrafter) also spent the weekend at the racetrack. This coming week on his YouTube channel he will publish a video in which he shares his experiences in the race taxi with Jeffrey Schmidt and in gaming in the Porsche racing simulator.

A look back at race 3

Porsche Junior Sven Müller has won race three of the Porsche Carrera Cup Deutschland. On the Hockenheimring Baden-Württemberg the 24 year old from Germany seized the lead with his 460 hp Porsche 911 GT3 Cup and refused to relinquish it to the flag. Finishing in second and third were Christian Engelhart and Jeffrey Schmidt. “That was one of the most exciting races I’ve ever driven. I got away superbly at the start because, unlike at other races, we were started with a flag. The drivers behind me were on fresh tyres so I knew I would have quite a job to fend them off. My third victory in a row. I’m very pleased,” said Müller.

Polesitter Engelhart appeared a little disconcerted when the flag suddenly came out to start the race instead of the usual lights. Müller used the situation to get past the MRS pilot and snatch the lead in the first corner. But Engelhart gathered his wits and caught Müller to put him under pressure from the fifth lap. Schmidt in third made the most of their dual and made up ground to Engelhart. In lap nine, the Swiss pilot briefly got past Engelhart but the Hockenheim specialist from Germany immediately made a countermove and reclaimed position two. “The start proved decisive. The lights didn’t work and I reacted too late. Afterwards I tried to get past Sven a couple of times but it didn’t work,” explained Engelhart.

Müller, Engelhart and Schmidt eked out an advantage

On the 4.574-kilometre racetrack, Müller, Engelhart and Schmidt eked out an advantage and later on the podium the three were handed their trophies by Board Member for Production and Logistics Albrecht Reimold. Behind the top three were Luca Rettenbacher (A/Konrad Motorsport) as the best rookie on fourth, followed by the Australian Nick Foster (KÜS Team75 Bernhard) in fifth. The Irishman Ryan Cullen (Konrad Motorsport) crossed the finish line in sixth.

The vehicle driven by Porsche Junior Dennis Olsen (N/Team Lechner Huber Racing) was forced into a spin after contact with another driver. “I felt the shunt but was able to correct the car after the spin. Then I was hit from behind and the suspension broke. I had to park my car in the pits,” said Olsen. In the overall classification, Müller leads after three races with 60 points ahead of Engelhart (45) and Olsen (40).

The next race weekend of the Porsche Carrera Cup Deutschland will be contested from 20 to 22 May on the Red Bull Ring in Spielberg.