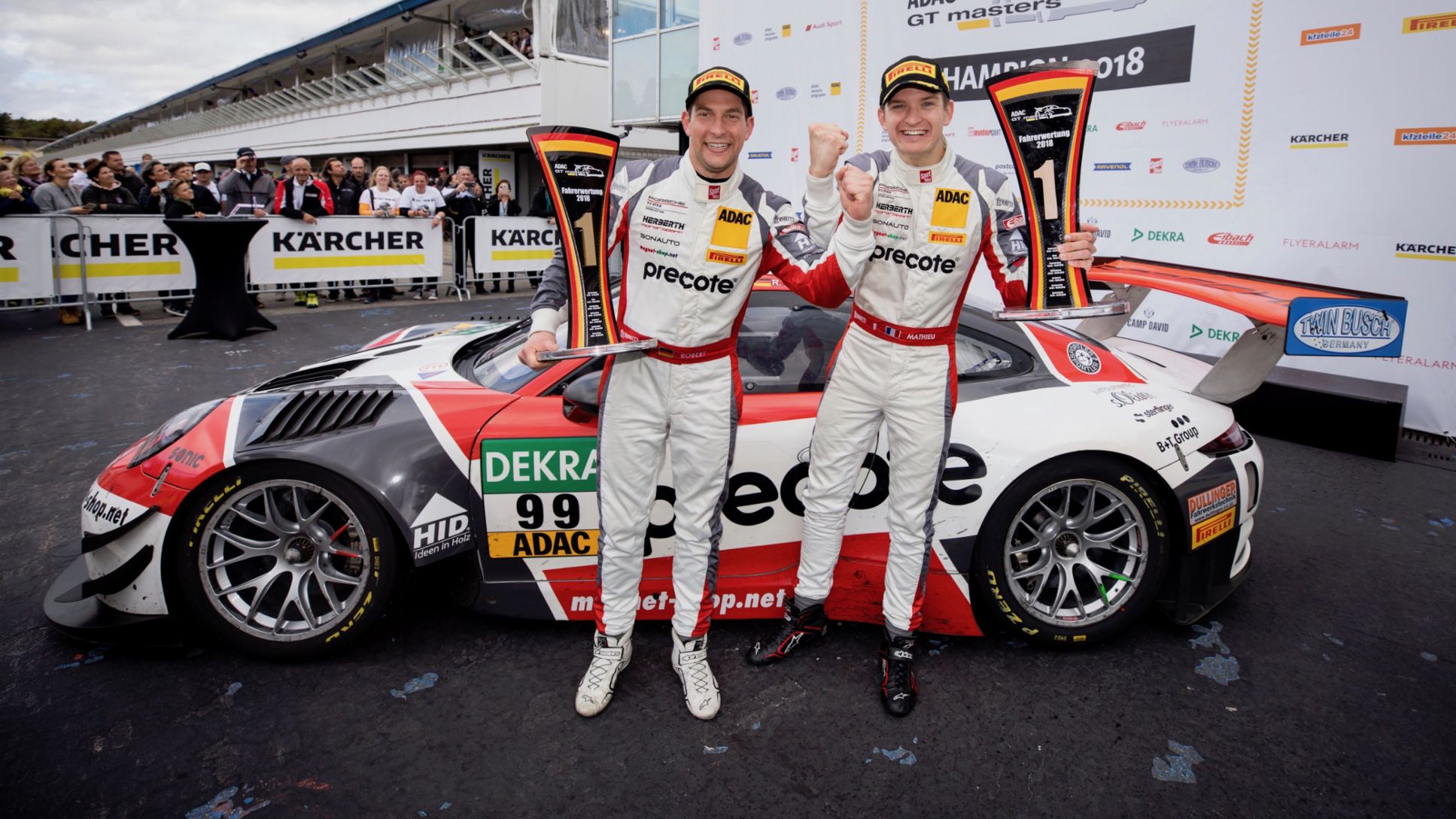 A great achievement for the Porsche customer team Precote Herberth Motorsport: In a turbulent final race at the Hockenheimring, the Porsche Young Professional Mathieu Jaminet and Robert Renauer celebrated the championship title in the ADAC GT Masters.

The German-French duo took up the race on Sunday from tenth place and battled their way up the field to finish fifth to be crowned the new champions at the international race series with a one-point advantage. The drivers’ championship title for Jaminet and Renauer marks the second for Porsche in the “super sports car league” since 2008. Timo Bernhard and Kévin Estre took the flag in sixth place with the second-best Porsche 911 GT3 R. The newcomer team IronForce by Ring Police secured second place in the Trophy category for amateur drivers.

After an inspired drive, the Porsche-supported Jaminet (France) and his German teammate Renauer were crowned champions. When the start driver Jaminet achieved the tenth fastest qualifying time on the drying racetrack, a pursuit race was needed to defend their lead in the drivers’ standings. The 23-year-old Porsche Young Professional maintained his composure amongst the chaos of the start, in which four vehicles retired due to an accident, kept his eye on the big picture and immediately gained six positions. By the time he handed the race car from Weissach to Jaminet he was running in fourth place. After 15 laps, the current 24H series winner Renauer took the wheel of the 911 GT3 R. The racing driver from Upper Bavaria left the pit lane in fifth place and maintained this position to the flag after 31 laps. “I’m lost for words. This weekend was a rollercoaster of emotions. We came here leading the points, yesterday we took pole position and came second in the race. The timing in today’s qualifying didn’t go at all well. Watching the race from the pitwall after the driver change was a real nail-biter. Now I’m over the moon,” said Jaminet. “The 911 GT3 R fielded by Timo Bernhard and his crew was behind me when I left the pit lane. It covered me brilliantly, the Porsche spirit out there was tremendous,” explained Renauer.

In a repeat of the previous day, the number 17 race car fielded by KÜS Team75 Bernhard put in an impressive performance. Estre took up the challenge on the 4.574-kilometre from position 18 on the grid. By the time the Frenchman came in for the mandatory pit stop after 13 laps, he had gained twelve positions. His works driver teammate, Timo Bernhard from Germany, held on to this position to the chequered flag. “Once again our car was very fast. If we’d started further up the grid, we could have fought for a podium spot. I managed to make up several positions during my stint, and Timo was the guardian angel for Precote Herberth Motorsport after the driver change. I’m thrilled that a Porsche team managed to secure the title,” said Estre.

IronForce by Ring Police finished the final round on 22nd place. Lucas Luhr from Switzerland could not reap the full potential of the 911 GT3 R in qualifying due to the changing track conditions. Starting from P33 on the grid, the former long-standing Porsche works driver immediately launched a pursuit before handing the No. 69 car off to Jan-Erik Slooten after 16 laps. The German brought home second place in the trophy category, and second overall in the class for amateur drivers. “We experienced a difficult weekend and couldn’t achieve what we’d actually planned to do at the final round. The positive aspect, however, was that we had a lot of spectators at the racetrack. Congratulations to Mathieu and Robert on winning the championship,” declared Luhr. The famous YouTuber and TV host Jean-Pierre “JP” Kraemer supported the team at the racetrack.

Klaus Bachler had to park the race car

Luck evaded the second 911 GT3 R campaigned by KÜS Team75 Bernhard on Sunday. Klaus Bachler (Austria) took up the last race of the season from position eight. However, in the very first lap, the former Porsche Junior had to park the race car after becoming entangled in an accident caused by another competitor. “The qualifying went really well, and eighth was a promising starting position for the race. You could see how fast the car was. My start was good, but I couldn’t avoid the other car in the accident,” explained Bachler.

Jaminet and Renauer earned the decisive points for the title witnessed by Dr Frank-Steffen Walliser, Vice President Motorsport and GT Cars. “That was a very emotional finale, which we won with a one-point advantage. Precote Herberth Motorsport did a fantastic job over the entire season. The crew has definitely earned this success, which was also evident by the reaction in the paddock. Congratulations to the champions!” declared Walliser.

“That was an extremely gripping finale. Congratulations to Precote Herberth Motorsport. They worked hard for the title and did a consistently good job. The KÜS Team75 Bernhard squad continued to improve over the last weekend of the season and made an important contribution to the overall success for Porsche. I’m sorry that Klaus Bachler and Adrien de Leener had to retire in the first lap today. They performed well throughout the year. IronForce by Ring Police coped well with the difficulties of their maiden season and managed to keep battling their way forward,” said Marc Lieb, Head of Customer Racing.

The finale on the Hockenheimring Baden-Württemberg concludes the twelfth season of the ADAC GT Masters. The last race weekend of the “super sports car league” has been contested on the tradition-steeped 4.574-kilometre racetrack in Germany since 2011. Seven race weekends in Germany, the Czech Republic, Austria and the Netherlands made up the 2018 race calendar.

The Porsche customer team Precote Herberth Motorsport has taken a big step closer to claiming the title of the ADAC GT Masters. Scoring second at the penultimate race of the season, Robert Renauer and Porsche Young Professional Mathieu Jaminet have extended their lead in the championship by ten points. On the Hockenheimring Baden-Württemberg, Timo Bernhard and Kévin Estre from KÜS Team75 Bernhard finished ninth after a courageous pursuit race in their Porsche 911 GT3 R. The newcomer team IronForce by Ring Police came third in the trophy category for amateur drivers.

The seasoned Porsche specialist Robert Renauer from Germany, who won the 24H series last year, posted the best time in qualifying, making it the second pole position this season for Precote Herberth Motorsport. As the start driver, the 2016 Porsche Cup winner (an award for the world’s most successful Porsche privateer) initially pulled clear of the field, but had to relinquish his lead spot in the eighth lap. After 15 laps, Jaminet took the wheel of the No. 99 Porsche 911 GT3 R. The Porsche-supported Frenchman crossed the finish line after 36 laps in second place and thus guaranteed the championship lead in the drivers’ standings. Thanks to this result, the advantage in the championship has grown by ten points heading to the final round on Sunday. “Our start was really good, but unfortunately we only held the lead for a few laps. We’re pleased with second place and the fact that we could extend our lead in the championship. At Sunday’s qualifying, everyone is back to square one. Of course we want to start as far up the grid as possible and win the title.”

Bernhard: “Our goal on Sunday is definitely to finish on the podium”

The No. 17 customer sport racer fielded by the KÜS Team75 Bernhard squad put in a spirited charge through the field. An accident in qualifying threw the German Porsche works driver Bernhard down the grid to position 34. In the race, the two-time Le Mans overall winner resolutely worked his way up the field. By the time he handed the 911 GT3 R off to his teammate after 15 laps, he had gained 21 positions. His teammate Estre continued the hot pursuit and crossed the finish line in ninth place. “As I accelerated out of the pit lane during qualifying, I swerved to avoid a vehicle part lying on the track and lost the rear of the car with the wheelspin. The race was a good compensation for our fans and the teams. Our goal on Sunday is definitely to finish on the podium,” explained Bernhard.

The second 911 GT3 R fielded by the team from Rhineland-Palatinate narrowly missed out on scoring points. Start driver Adrien de Leener took up the penultimate race of the season from P23 after encountering two red phases and heavy traffic. In the race, the Belgian worked his way up to 16th. After 13 laps, de Leener headed into the pits and handed the car off to Klaus Bachler. The former Porsche Junior made up more positions and took the chequered flag in twelfth. “After the qualifying we knew that we’d have to take care at the start, because things get pretty tight in the back third of the field. In the first corner I had to avoid several cars. Unfortunately, another car blocked us when we pitted for the driver change and we lost time,” said de Leener.

A successful day for the Porsche customer teams

The customer team IronForce by Ring Police occupied 26th place in the overall classification. Start driver Jan-Erik Slooten took up the penultimate race from P30 and made up one position during his stint. After 13 laps, the German handed the car off to Lucas Luhr. The long-serving former Porsche works driver from Germany gained three more positions over the remaining 22 laps. The team, supported by the popular YouTuber Jean Pierre “JP” Kraemer, scored third in the trophy class for amateur drivers. “At the start there were several collisions in front of me, which cost me several places. We had a problem early on with the ABS, and that made it difficult to catch up. We were very happy with the speed of the 911 GT3 R in the race – that put us in the top ten,” said Slooten.

“That was a successful day for the Porsche customer teams. Herberth Precote Motorsport performed brilliantly in qualifying and with second place they could extend their lead in the championship. The other racing squads experienced a bit of bad luck in qualifying but did well in the race. Timo Bernhard and Kévin Estre in the No. 17 Porsche 911 GT3 R put in a strong drive. The championship is very close. We’re looking forward to the final race and we’re hoping for a good conclusion to the season for Porsche,” said Marc Lieb, Head of Customer Racing. 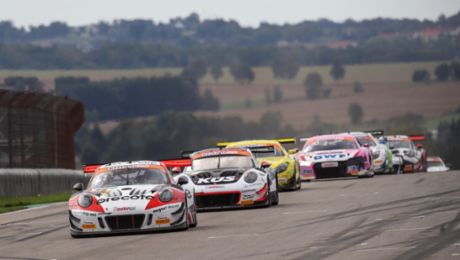 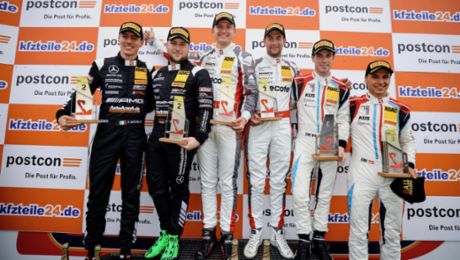 Mathieu Jaminet and Robert Renauer claimed victory with a 4.8-second advantage over their closest pursuer. 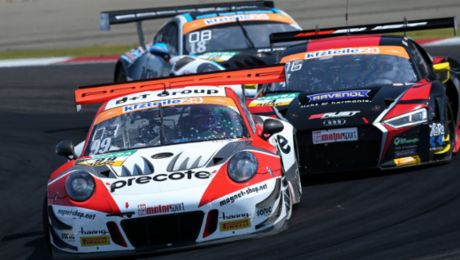