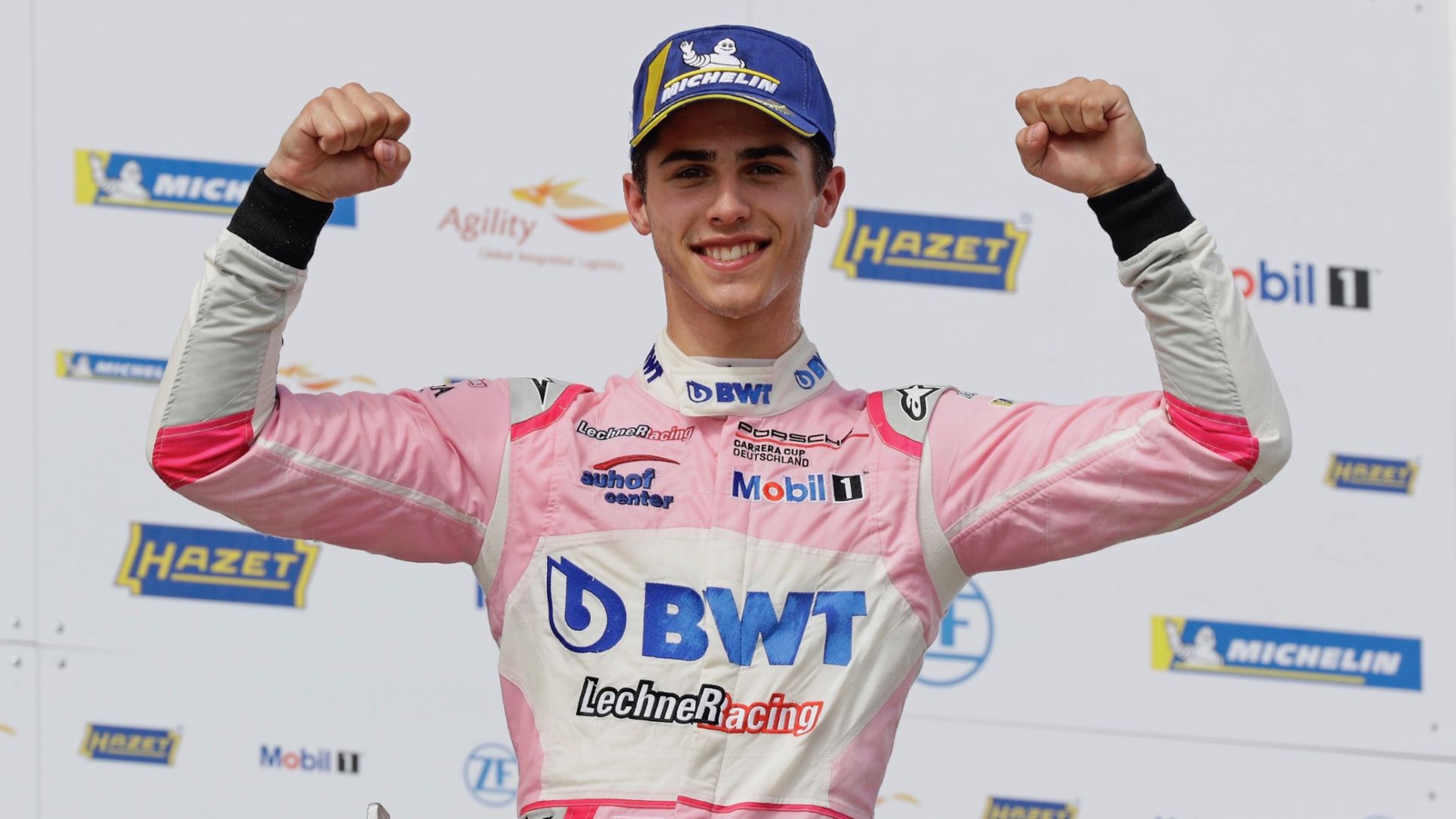 In the fight for the Porsche Carrera Cup Deutschland title, Thomas Preining is in an excellent situation heading to the season finale: After finishing Saturday’s race in first place, the Porsche Junior went on to secure his eighth win of the season at round twelve on Sunday.

“I positioned my car at a slight angle on the grid so that I could grab the inside line as fast as possible. That’s where the racetrack goes slightly steeper downhill. Michael Ammermüller attempted to attack right after the start, but I did a good job fending him off. Now I can travel to Hockenheim feeling confident,” said Preining (A/BWT Lechner Racing). Michael Ammermüller (D/BWT Lechner Racing) finished on second in his Porsche 911 GT3 Cup with Larry ten Voorde (NL/Team Deutsche Post by Project 1) completing the podium. The championship will be decided between Preining (229 points) and Ammermüller (202 points). At the final two races at the Hockenheimring Baden-Württemberg, 50 points are still up for grabs.

A total of 26 vehicles lined up on the grid for Sunday’s race in sunshine and 24-degrees Celsius. With a rocket start from pole position, Preining immediately took the lead. Starting from second on the grid, Ammermüller settled in behind Preining. The German race driver waited for the youngster to make a mistake, however Preining gradually increased the gap over the course of the race. In the 14th lap, the safety car was deployed while a vehicle was recovered from a gravel trap. At the restart two laps later, the cards had been reshuffled. 20-year-old Preining successfully defended his top spot and took the flag in first place after 19 laps. Ammermüller followed him over the line 1.2 seconds later. “I couldn’t do better than second place. Thomas Preining quickly moved to the inside at the start and left me no gap,” said Ammermüller. For the seasoned specialist, this marks the eighth podium finish this season.

Third place on the 3.645-kilometre racetrack was occupied by ten Voorde. The Project 1 driver started from third on the grid, but lost his position to Toni Wolf (D/Car Collection Motorsport) in the first lap. Ten Voorde then stuck to the bumper of the 19-year-old German. In lap 13, the driver from Boekelo in the Netherlands made his move and snatched back third place. “Unfortunately I fell back after the start but I don’t let such things worry me. I then waited for my chance and grabbed it,” said ten Voorde. Toni Wolf competed in front of home crowds this weekend. The driver from Schönbrunn in Saxony concluded the race on fourth place – and achieved his best result of the season so far.

Points standings after 12 of 14 races

Thomas Preining continues to set the benchmark in the Porsche Carrera Cup Deutschland. On the Sachsenring, the Porsche Junior turned his pole position into a victory. His record of success so far: Seven wins from eleven races. “Things got really tight in the first corner after the start. I was under pressure at first, but managed to pull clear. I now have a 22-point advantage in the championship – that’s the most important thing,” said Preining (A/BWT Lechner Racing). Second place at Saturday’s race went to Marius Nakken (MRS GT-Racing) from Norway ahead of Germany’s Tim Zimmermann (Black Falcon Team TMD Friction).

Right from the start, Preining underscored his claim to victory. As soon as the lights went off, the 20-year-old ducked to the inside line with his 485 hp Porsche 911 GT3 Cup. This closed the gap for Michael Ammermüller (D/BWT Lechner Racing) on second to overtake. While Preining proceeded to eke out an advantage lap after lap, Ammermüller – his closest rival in the championship – lost three places after the first corner: Nakken swept from fourth on the grid to second place. Behind the 24-year-old Norwegian, Zimmermann and Toni Wolf (D/Car Collection Motorsport) followed. Clinching second place, Nakken celebrated his best result in the Porsche Carrera Cup Deutschland. “I’ve been aiming for a podium since the first race. Now my dream has come true. After the start I saw a gap on the inside in the first corner and I immediately grabbed my chance,” said the Norwegian.

Scoring third place, Zimmermann also set a personal best. The rookie even managed to beat the seasoned specialist Ammermüller on the 3.645-kilometre racetrack. The Lechner driver made several attempts to get past Zimmermann, but the 22-year-old fended him off. This made the driver from Lake Constance the best rookie of the 27-strong field. “To be honest, at first I didn’t think I could defend myself from Michael Ammermüller over the whole distance. So that makes my first podium result in the Carrera Cup even better,” said Zimmermann. Ammermüller crossed the finish line in fourth place 0.253 second behind. Fifth place went to Larry ten Voorde (Team Deutsche Post by Project 1) from the Netherlands.

This weekend’s event marked a home race for Toni Wolf: The 19 year old lives around 50 kilometres away from the Sachsenring in Schönbrunn, Saxony. Wolf took up the race from the sixth grid spot and at one point had moved into fourth place. Ultimately, he crossed the finish line in sixth. Seventh place was occupied by Igor Walilko (PL/Raceunion) ahead of Glenn van Parijs (B/MRS GT-Racing). Carlos Rivas (Black Falcon Team TMD Friction) celebrated victory in the amateur class. Finishing behind the Luxembourger were the German drivers for the Cito Pretiosa squad, Stefan Rehkopf and Jörn Schmidt-Staade.

The BWT Lechner Racing team had reason to celebrate. After earning 384 points, the squad from Austria has taken home the team championship trophy early. For the established team, this is the second team title in the Porsche Carrera Cup Deutschland. In the eleven races contested so far this season, at least one of the two Lechner drivers, Preining or Ammermüller, stood on the podium.

In the championship, Preining has expanded his lead at the top of the points table: After eleven races, he leads the classification with 204 points. Ammermüller follows on second with 182 points. Ten Voorde occupies third with 133 points. Holding 169 points, Dylan Pereira (L/Lechner Racing) leads the rookie classification. Schmidt-Staade ranks first in the amateur class. The Düsseldorf racer has earned 199 points.

Races 13 and 14 make up the final weekend of this year’s Porsche Carrera Cup Deutschland. Both races will be contested on the Hockenheimring Baden-Württemberg as part of the ADAC GT Masters weekend from 21-23 September. The national one-make cup series has been contested on the tradition-steeped racetrack in Germany’s Upper Rhine Valley every year since its maiden season in 1990. 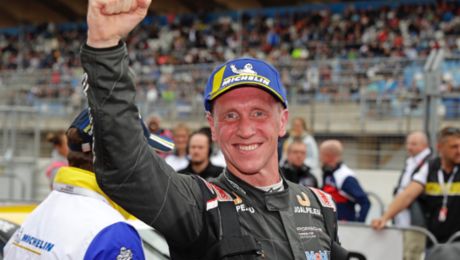 Thomas Preining has extended his lead in the championship by ten points over Michael Ammermüller.

The Porsche Carrera Cup Deutschland has a new championship leader. Race eight at a glance. 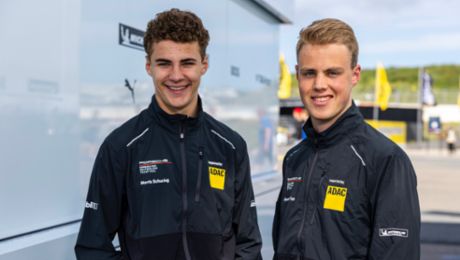 The ADAC is the new partner of the Talent Pool, the youth development initiative of the Porsche Carrera Cup.