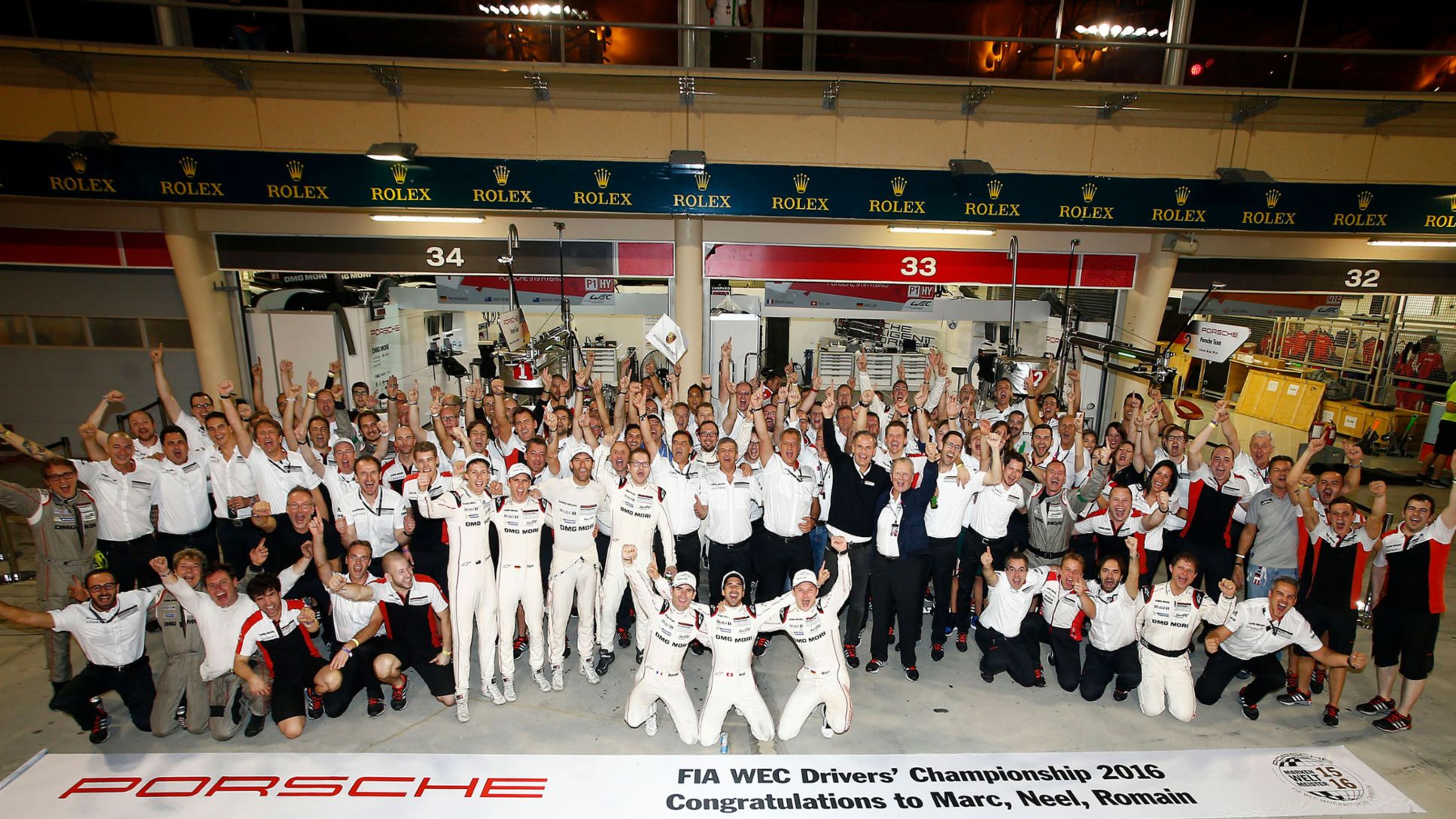 In the last of nine WEC rounds in 2016 Timo Bernhard (DE), Brendon Hartley (NZ) and Mark Webber (AU) came third, having started second on the grid with their Porsche 919 Hybrid. The new world champions, Romain Dumas (FR), Neel Jani (CH) and Marc Lieb (DE) only came sixth after contact with another car early in the race. Audi’s dominant one-two race result was an impressive farewell from the WEC.

The six-hour race started at 16:00 hrs with ambient temperatures near 30 degrees Celsius. After the sun had set at 16:45 hrs the air cooled down to 24 degrees.

How the race went for car number 1

Bernhard starts from second on the grid and lets Jani in the sister car pass him on the first lap. On lap 13 the number 7 Audi also overtakes him, Bernhard is fourth now. After 29 laps he hands over to Webber, who manages to improve to third by overtaking the number 5 Toyota on lap 43. Hartley jumps in after 59 laps, and after 89 laps Bernhard takes over until Hartley is back in the car after 120 laps. Bernhard once again jumps in after 150 laps, before finally, after 180 laps, Webber goes in to enjoy the final stint of his racing career. After a total of 201 laps he brings the 919 home in P3.

How the race went for car number 2

Jani improves on lap one from third to second. On lap 15 he is overtaken by the number 7 Toyota. Jani is third now in front of the sister Porsche. After 28 laps he has his first pit stop and continues. One lap later he has contact with a GT car and has to stop again: the damaged tyre and rear bodywork is changed. Now the number 2 Porsche is one lap down. After 60 laps Dumas takes over, after 91 laps it is Lieb’s turn, after 122 laps Jani is back behind the wheel and after 153 laps it is Dumas again. Lieb climbs into the car for the final stint to cross the line some 20 minutes later after 198 laps and becomes a world champion.

With a win and a second place at the final round of the Sports Car World Endurance Championship WEC in Bahrain, the Porsche customer teams have successfully concluded the 2016 season. At the Bahrain International Circuit on Saturday, Abu Dhabi Proton Racing celebrated its second win of the season in the GTE-Am class with the Porsche 911 RSR shared by the Porsche works driver Patrick Long (USA), Khaled Al Qubaisi (Abu Dhabi) and David Heinemeier Hansson (Denmark). In September, the team, which is managed by the long-standing Porsche partner Proton Competition, clinched victory at the inaugural race in Mexico City. Porsche factory pilot Wolf Henzler (Germany), Christian Ried (Germany) and Joel Camathias (Switzerland) took the flag in second place with the 911 RSR flying the colours of KCMG, a racing squad from Hong Kong. This marked their fifth podium result in a row.

The cornerstone to the victory for Abu Dhabi Proton Racing was laid by Patrick Long. When he took over driving duties from his teammate Khaled Al Qubaisi after the first hour of racing on the 5.407-kilometre Grand Prix circuit on the outskirts of the capital of Manama, the #88 Porsche 911 RSR was running in fifth place. Thanks to a strong performance against stiff competition from Aston Martin, Chevrolet and Ferrari, the American made up two positions in his first laps with the winning racer from Weissach, which is based on the seventh generation of the iconic 911 sports car. Shortly afterwards, he snatched the lead. With his teammates, he defended his top position to the flag in the hotly-contested class. Gulf Racing rounded off the success for Porsche customer squads at the season finale in the desert with the all-British driver line-up of Ben Barker, Adam Carroll and Michael Wainwright narrowly missing out on a podium spot in fourth place.

In the GTE-Pro class, Richard Lietz (Austria) finished seventh with his Porsche works driver colleague Michael Christensen (Denmark). A year ago at the Bahrain race, Lietz won the FIA World Endurance Cup and was honoured as the most successful GT pilot of the season. This season, their 911 RSR was campaigned by the Dempsey Proton Racing customer team.

LMP1-Klasse
Fritz Enzinger, Vice President LMP1: “Today’s race has shown what characterises the Porsche Team. It was able to handle a difficult race under huge pressure. I can only say thank you to all six drivers, every single team member and the Porsche board members, who have supported this programme right from the beginning. Also today at the track they have personally shown that they absolutely support the project. Congratulations to Audi for a well deserved victory today, and thanks for the great competition – we will miss you.”

Andreas Seidl, Team Principal: “Le Mans winners, manufacturers’ and drivers’ champions – for the second consecutive year we have achieved all our goals. That is an immense joy for us as the Porsche Team. I congratulate our three world champions Marc, Neel and Romain as well as the crew of car number 2. This car has been the only one of all LMP1 entries that hasn’t spent a single second inside the box with technical problems during the 2016 races. We are now looking forward to the celebrations. And, after a short pause for a rest, we will start flat out with the preparations for 2017.”

Drivers Porsche 919 Hybrid number 1
Timo Bernhard (35, Germany): “My start wasn’t too bad. Neel came on the inside and, of course, I left him room to overtake. We were about the same speed and neither of us was quick enough to catch the Audi, but clearly we beat Toyota. For us it was very important to hand over the car to Mark at the end and enable him to do the last laps, and we wanted to be together with him on the podium for one last time. This was a very emotional day, too much to put it into words.”

Brendon Hartley (27, New Zealand): “My first stint after Timo and Mark had been driving went pretty cleanly. I had Kazuki Nakajima behind me and it was a bit tricky with the traffic, but it came out okay. Regarding the Audi, we were hoping to get closer when it was getting cooler, but it didn’t work out today. They deserved the victory in their last race. And for Mark and us it worked out, as we got onto the podium in his last race. We did our maximum today, and it is really very sad to see him go.”

Mark Webber (40, Australia): “I was the second and the last driver in the car today, and pretty happy with both stints. Early in the race I had a nice little fight with the number 5 Toyota. I managed to get passed him and tried to pull away, but we didn’t have enough pace to fight the Audi. Then for the final stint it was pretty emotional putting my helmet on for the last time. I enjoyed the last stint and I got the chance to bring the car to the chequered flag for the top three finish, and this was the maximum we could get today. It has been such an incredible three years for me with Porsche, together with Timo and Brendon and the whole team. Nothing is forever, I’m stopping at a good time and I’m looking forward to seeing everybody again soon.”

Drivers Porsche 919 Hybrid number 2
Romain Dumas (38, France): “For us the chance for a podium was over after one hour into the race. After Neel had contact with another car our 919 felt strange. We had a little oversteer everywhere. But, because of the championship situation, we didn’t have to push. For us it was important to finish the race reliably and avoid any mistakes – I’m relieved it worked out.”

Neel Jani (32, Switzerland): “It was a promising race start. It was also hard work, because I frequently got into traffic in the worst places, but the strategy and the first pit stop went very well. Then when I was on my out lap a GT car just hit me, which caused damage to a rear tyre and bodywork. After the repairs the car wasn’t great anymore and we had no chance to close the huge gap to the front. All we could do was hope the number 6 Toyota would not win and make sure that we would not take any risks on track.”

Marc Lieb (36, Ludwigsburg): “For me it went pretty smoothly, and I was just carrying the car round the track. Since the hit when Neel was driving early in the race, the steering wheel wasn’t straight anymore. Our 919 wasn’t in the best shape in the end, but we rolled it home, and we just made it.”

GTE-Klassen
Patrick Long (Porsche 911 RSR #88): “It was a perfect race from start to finish for us. Everything ran really well, including the pit stop in the safety car phase, which definitely decided the race in our favour. My teammates again put in a strong drive and in the end it was my job to bring victory home safely.”
Khaled Al Qubaisi (Porsche 911 RSR #88): “It’s wonderful to end the season with a win. I would like to thank the whole team for their untiring efforts, not just in the race but throughout the entire year. We are now second in the championship and we’ll be back in 2017 to fight for the title.”

David Heinemeier Hansson (Porsche 911 RSR #88): “What a great way to finish the season. Not only because we won but also because Porsche occupied the first two places in the GTE-Am class. A strong performance.”
Wolf Henzler (Porsche 911 RSR #78): “We are delighted to be back on the podium, but we could have won today. The only safety car phase of the race cost us the victory. It happened one-and-a-half laps after we’d been in the pits. Our teammates used it for their pit stop and surely made up 50 seconds because of it. We simply weren’t able to make up the difference, although we pulled out all stops and tried everything.”

Christian Ried (Porsche 911 RSR #78): “After four podiums from the last four races we actually wanted to score our first victory here. Unfortunately we’ll have to postpone it until 2017. Thank you to the entire team for the great pit stops and for the excellently prepared 911 RSR.”

Joel Camathias (Porsche 911 RSR #78): “Unfortunately we experienced a little bad luck again at the season finale. We’ve never been as close to victory as we were today. It’s a shame it didn’t work out. Still, five podiums in a row are not too bad.”

Richard Lietz (Porsche 911 RSR #77): “We were actually feeling quite confident that we’d finish further up the field but unfortunately that didn’t happen. It was a tough year in the WEC. Still, we never gave up and, despite everything, we gained important experience.” 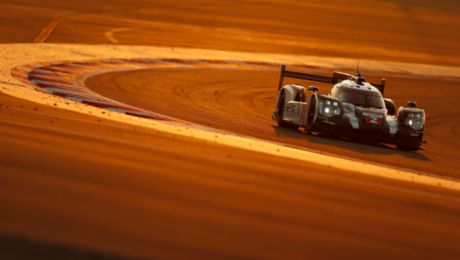 Find all information from the 6 hours of Bahrain in our news blog. 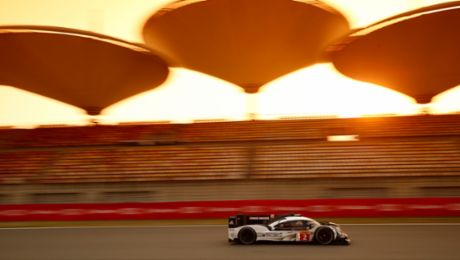 Porsche to fight for the drivers’ title

WEC: Porsche is determined to also take the drivers’ title in Bahrain.