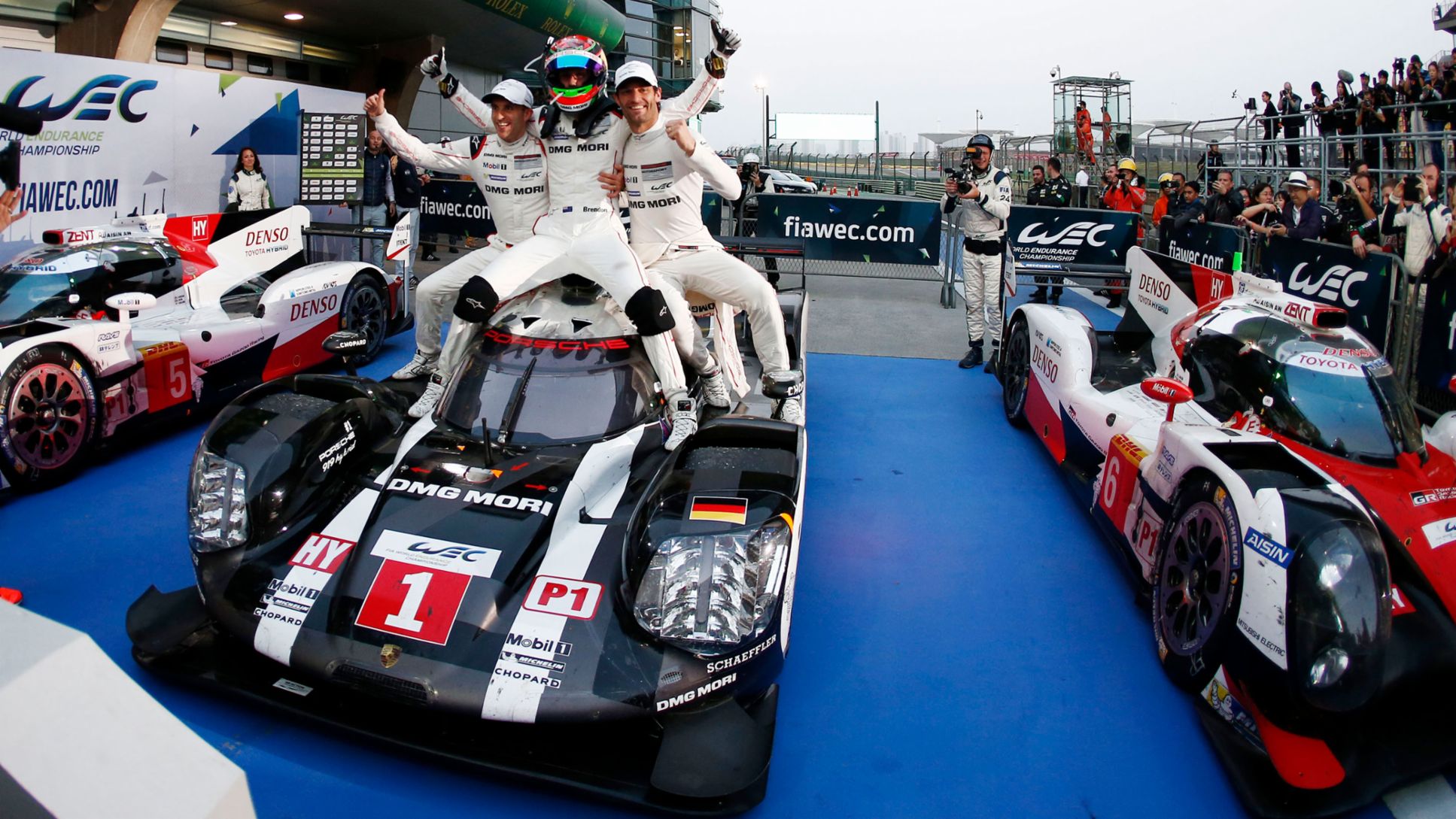 The sports car brand with the innovative Le Mans Prototype Porsche 919 Hybrid has secured the manufacturers’ title in the FIA World Endurance Championship one race before the season’s finale.

At the six-hour race in Shanghai this Sunday the driver trios of Timo Bernhard (DE)/Brendon Hartley (NZ)/Mark Webber (AU) and Romain Dumas (FR)/Neel Jani (CH)/Marc Lieb (DE) finished first and fourth to earn Porsche 38 points. Having now scored 301 points in total, Audi (222) and Toyota (207) cannot now catch Porsche at the last round in Bahrain on November 19.

Porsche celebrates its sixth race win this season and the successful defence of the manufacturers’ world championship title in Shanghai. At the penultimate of nine rounds of the FIA World Endurance Championship (WEC) the race winners were Timo Bernhard (DE), Brendon Hartley (NZ) and Mark Webber (AU), who started from pole position. The trio with the sister Porsche 919 Hybrid, Romain Dumas (FR), Neel Jani (CH) and Marc Lieb (DE), who are the championship leaders, had started from sixth and finished fourth. Hartley set the fastest race lap with at time of 1.45,935 minutes on the 5.451 kilometre long Shanghai International Circuit. The six-hour race was held in dry conditions and temperatures of around 23 degrees Celsius.

Michael Steiner, board member for research and development of Porsche AG, wit-nessed the title win on site and said: “The second manufacturers’ world champion-ship title for Porsche is another confirmation of the 919 Hybrid’s brave concept. The Weissach developed prototype joins other important Porsche race cars that were al-so ahead of their times, such as the 718 RS, 904, 917 or 956. They all wrote motor-sport history and significantly fired the road car development. This also goes for the 919 Hybrid. I’m proud on the entire team.”

Fritz Enzinger, Vice President LMP1, added: “This big success was only possible thanks to a great team effort. Mechanics, engineers and drivers and many more peo-ple behind the scenes were fighting hard for this, and have now been rewarded for the second time after 2015. This doesn’t prove only the 919 Hybrid’s potential, but also the excellence of the team. I want to thank everybody from my heart.”

For the futuristic Porsche 919 Hybrid it is another chapter in a story of success. In 2014 the class one Le Mans prototype (LMP1) debuted with a unique powertrain concept. Since then Porsche has won the Le Mans 24-hour race twice, to take over-all victory number 17 in 2015 and 18 in 2016. In 2015, which was the second season for the young team, Porsche also won the manufacturers’ world championship. Last year’s drivers’ title went to Bernhard/Hartley/Webber in a nerve wracking finale in Bahrain. With one race to go, the current championship leaders are this year’s Le Mans winners Dumas/Jani/Lieb. In total, from 24 races, the Porsche 919 Hybrid has 13 race wins and 15 pole positions to its tally.

While the Porsche Team earns laurels on race tracks, the most important successes are achieved in the Porsche Research and Development Center in Weissach near Stuttgart. There the 919 Hybrid was created in close collaboration with the road car development. It delivers a system power of over 662 kW. Its combustion engine is a ground breaking downsizing motor. The compact two-litre V4 petrol en-gine is turbocharged and powers the rear axle with almost 368 kW. Two different energy recovery systems – using brake energy from the front axle and ex-haust energy – feed a lithium ion battery storage. From there, on demand, an electro motor takes the energy to power the front axle with an additional over 294 kW.

With the design of the 919’s hybrid systems, the race department did pioneering work. Especially with regards to high voltage technology, the 919 works as an experimental laboratory for the voltage level of future electric road going sports cars. This way the knowledge gained on race tracks allowed the product cars’ developers to introduce the four-door concept study Mission E with 800 Volt technology. The first purely electric driven road going sports car from Porsche will go into production within the current decade.

The success streak for Porsche customer teams in the Sports Car World Endurance Championship WEC continues: At the six-hour race in Shanghai, Porsche works driver Wolf Henzler (Germany), Christian Ried (Germany) and Joel Camathias (Switzerland) achieved the fourth straight podium result after a spectacular pursuit with the Porsche 911 RSR. With KCMG squad’s winning racer from Weissach, which is based on the seventh generation of the iconic 911 sports car, they secured second place in the GTE-Am class on the Shanghai International Circuit. After a consistently strong performance in the second half of the season, the team finished second in Austin and third at the races in Mexico City and Fuji.

The penultimate race of the season on the 5.541 kilometre Grand Prix circuit on the outskirts of the Chinese economic metropolis remained gripping to the very end, thanks to Wolf Henzler, who put a Ferrari ahead of him in second under increasing pressure in the closing phase of the race. When both cars became embroiled in a collision involving a prototype in the last lap, the Porsche factory driver grabbed the chance to snatch second place. For Abu Dhabi Racing, which celebrated its first win of the season in Mexico City, Porsche works driver Patrick Long (USA), Khaled Al Qubaisi (Abu Dhabi) and David Heinemeier Hansson (Denmark) clinched fourth place. The 911 RSR run by Gulf Racing with the all-British driver line-up of Ben Barker, Adam Carroll and Michael Wainwright crossed the finish line as sixth. 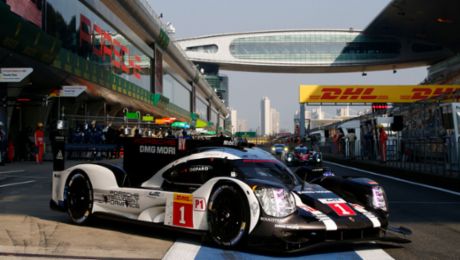 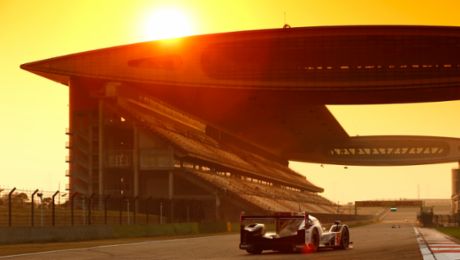 The Porsche Team had a positive first day of practice in Shanghai. 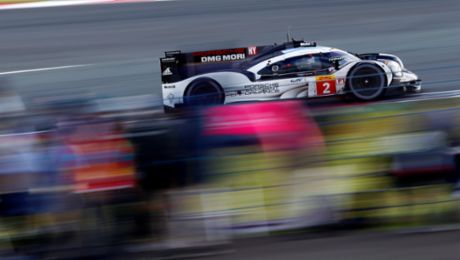 Porsche has come third and fifth with its two 919 Hybrids in Japan.