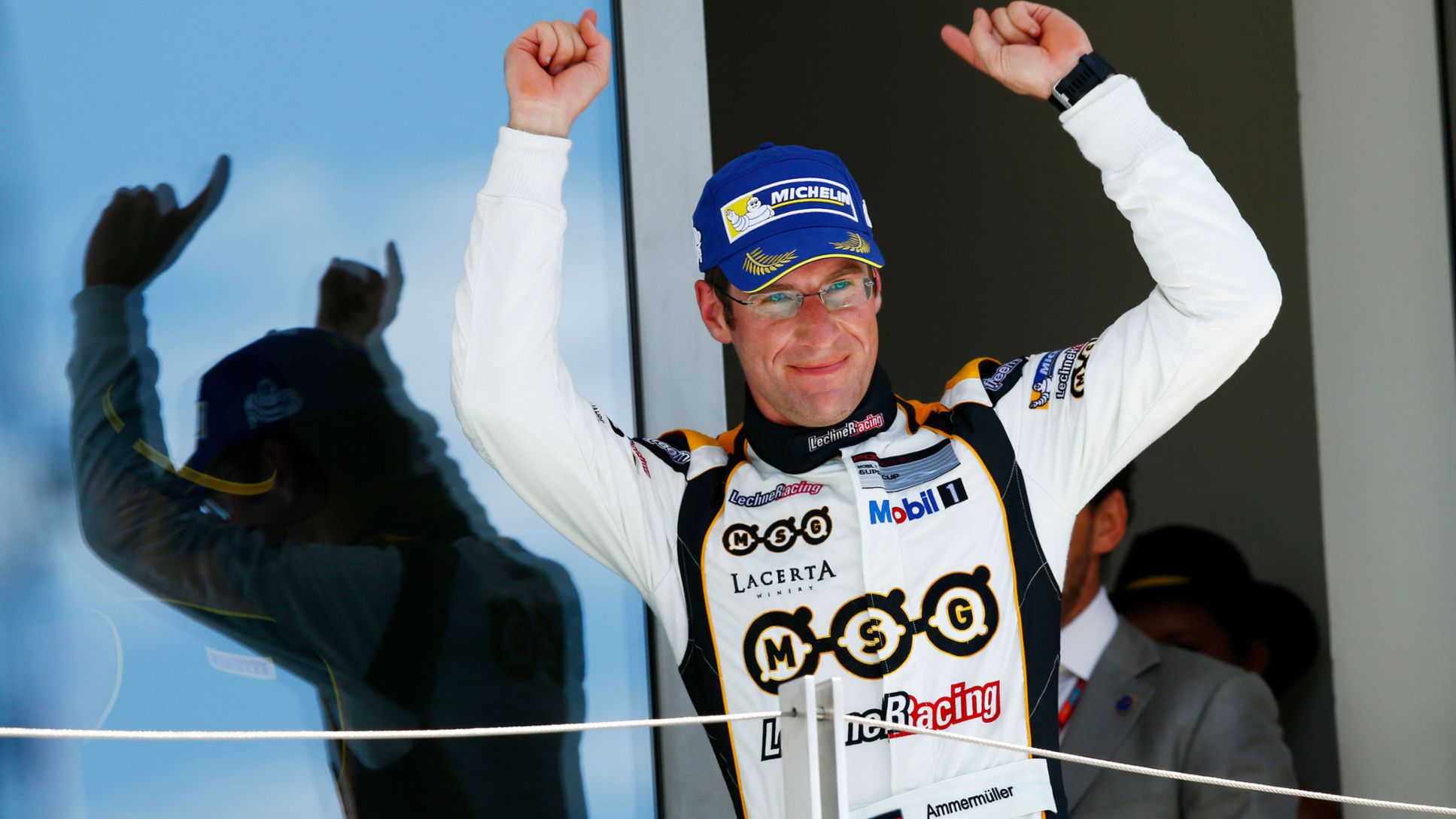 Germany’s Michael Ammermüller is the man of the moment in the Porsche Mobil 1 Supercup. The 31-year-old seasoned Porsche specialist won round six of the championship in Hungary on Sunday and leads the overall classification after four victories so far this season.

“When you start from pole position at the Hungaroring it gives you a good foundation. But at the start Dan Cammish suddenly swept past me. I eventually managed to overtake him later on. I’m happy that I was able to extend my points lead,” said the satisfied Ammermüller (Lechner MSG Racing Team). Positions two and three went to the Porsche Junior Dennis Olsen (N/Walter Lechner Racing Team) and Daniel Cammish (GB/Lechner MSG Racing Team).

Spectators on the packed grandstands witnessed plenty of gripping race action from the 30 competing Porsche 911 GT3 Cup. Overtaking manoeuvres and thrilling door-to-door duels underlined just how close the competition is in the Porsche one-make race series. When the lights went out, Cammish promptly overtook pole-sitter Ammermüller, who initially had to settle for second place. Olsen, too, had to relinquish his third position to Robert Lukas (PL/Olimp Racing) at the start. However, when Lukas lost concentration briefly in lap four, the Norwegian grabbed his chance to reclaim third. The order until lap eight was Cammish, Ammermüller and Olsen. “My start was good and I got past Michael. But after several laps his car improved and when he then launched his offensive in the eighth lap I thought: just don’t crash. We gave each other room and he then overtook me,” explained Cammish.

Position four after 61.294 kilometres went to Robert Lukas (Olimp Racing) from Poland, with Italian Mattia Drudi (Dinamic Motorsport) on fifth ahead of Dylan Pereira (Lechner Racing Middle East) from Luxembourg. Philip Morin (S/Martinet by Almeras) managed to make up the most places during the race. Starting from 20th on the grid, he ploughed through the field to take home points for seventh place. As the best B-class driver, Roar Lindland (N/MRS Cup-Racing) secured an impressive eighth in the overall classification and victory in the amateur category.

Porsche Junior Thomas Preining (A/Konrad Motorsport) celebrated his debut in the Porsche Mobil 1 Supercup, and finished 11th in the 30-strong field. “I was running on eight until lap twelve but then I had a collision with another vehicle. In the end I was eleventh. But for my first Supercup race on an unfamiliar racetrack I’m very pleased,” said the 19 year old. Luck was not on the side of Porsche Junior Matt Campbell (AUS/Fach Auto Tech) on this race Sunday: In the prestart, his clutch failed and he had to start from the pit lane. “I could drive without the clutch, but of course it was frustrating to lag behind the rest of the field,” said Campbell. After a spirited charge he ultimately finished on 17th.

A look back at the qualifying

The qualifying for round six of the Porsche Mobil 1 Supercup turned into a strategic game of poker. When the 30 pilots took off in the qualifying session on the Hungaroring not far from Budapest on Saturday, they demonstrated their different levels of willingness to take risks. In the end, the current leader of the championship, Michael Ammermüller (D/Lechner MSG Racing Team), played the best hand, securing his second pole of the season with his Porsche 911 GT3 Cup with a time of 1:46.926 minutes. Behind him on the storied 4.381-kilometre racetrack, Daniel Cammish (GB/Lechner MSG Racing Team) posted the second quickest time. Porsche Junior Dennis Olsen (N/Walter Lechner Racing Team) and Robert Lukas (PL/Olimp Racing) locked out the second grid row.

In sunshine and a track temperature of 55 degrees Celsius, Cammish immediately set the benchmark: On his first set of fresh rubber, he clocked the fastest time on the tradition-steeped Hungarian circuit after five minutes. At first, Ammermüller bided his time in the pit lane and only went out when the initial storm had subsided. On his second set of tyres and with three minutes left to the session, Ammermüller topped the time charts. “I knew that there’d be better grip conditions towards the end of the qualifying so I relied more on my second set of tyres and thought it’ll all be fine,” explained the 31-year-old Bavarian. Cammish said: “Unlike Michael, I opted for a different strategy. He’s incredibly experienced and this is only my first Supercup season. I wanted to post a good qualifying time on my first set of tyres, so that I’d have more up my sleeve later on. In the end, I managed to clock a great time and I’m very happy with position two on the grid.”

Porsche Junior Olsen takes up Sunday’s race from third and was not totally happy with his performance: “We came testing on the Hungaroring but the conditions here today weren’t comparable. I had difficulty finding my rhythm and I’m pleased that it was enough for the third quickest time. I’m aiming for a good start into the race tomorrow so that I can gain a little ground.” Last year’s polesitter, Lukas, drove the fourth fastest time. Lining up behind him on the fifth grid spot is Porsche Junior Matt Campbell (AUS/Fach Auto Tech). “The vehicle’s balance wasn’t optimal. It felt much better than in free practice, but we have to work on a few things before the race. Basically, I really like this track and I’m looking forward to the race,” said the 22-year-old Australian.

Mattia Drudi (Dinamic Motorsport) from Italy occupied position six in qualifying. Seventh went to the 19-year-old Porsche Junior Thomas Preining (A/Konrad Motorsport), who celebrates his debut this weekend in the Porsche Mobil 1 Supercup as a guest driver. “At the beginning it took some time to get used to the conditions, because I wasn’t accustomed to the rubber left on the track by the Formula 1 cars. I even made a tiny mistake during my fast lap shortly before the finish. I’ll take another good look at the data so that I know what I can improve on for the race,” said Preining. Britain’s Josh Webster (Fach Auto Tech) tackles the race from the eighth grid spot.

Next up on the Porsche Mobil 1 Supercup calendar is the double-header event in Belgium’s Spa-Francorchamps. Races seven and eight will be contested from 25-27 August on the 7.004-kilometre-long rollercoaster in the Ardennes.