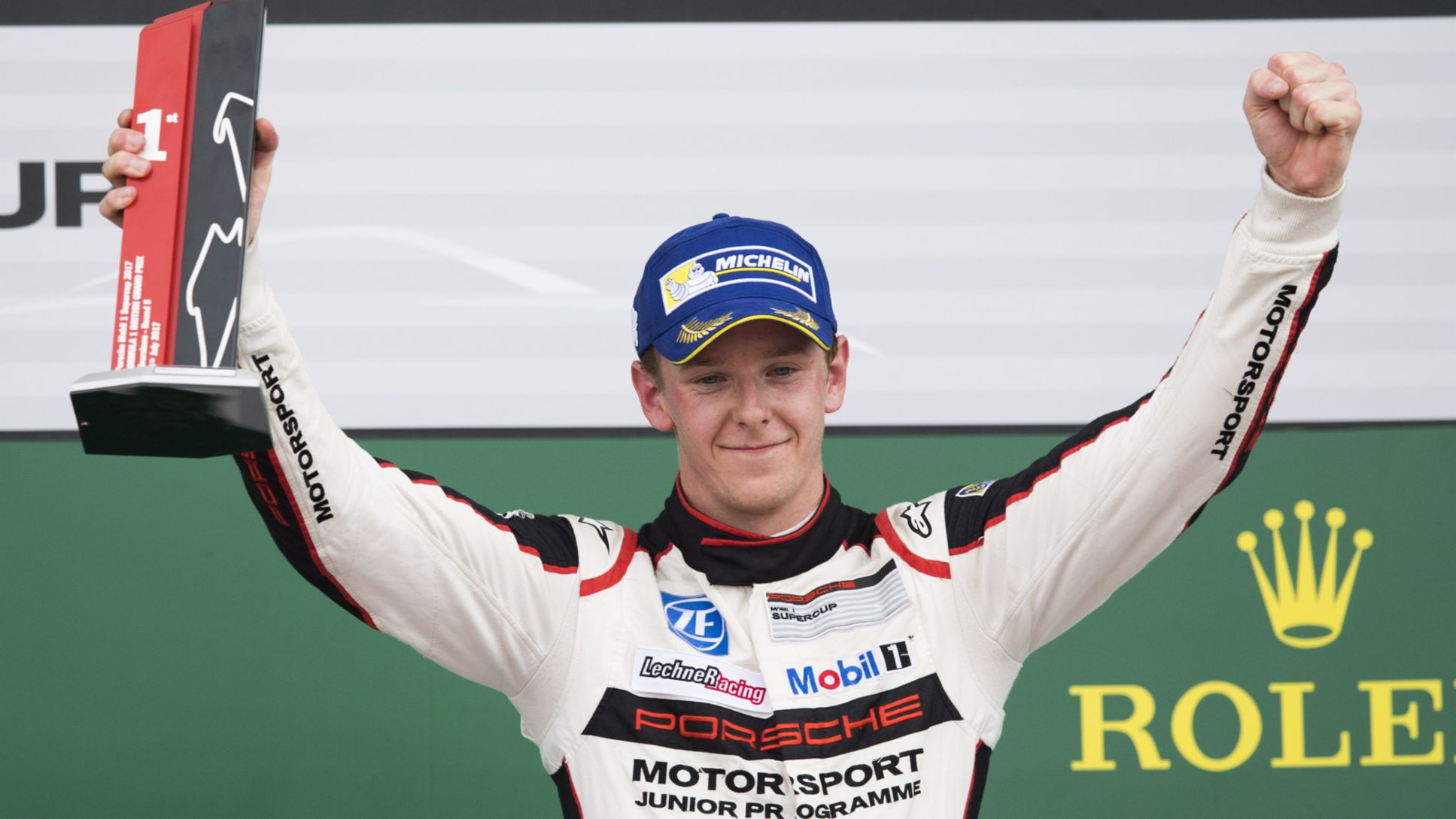 It was a perfect weekend for Porsche Junior Dennis Olsen at Silverstone in Great Britain. The 21-year-old Norwegian not only secured the fastest time in qualifying but also notched up his first victory in the Porsche Mobil 1 Supercup.

At round five of the championship, he crossed the finish line first on Sunday at the wheel of the new Porsche 911 GT3 Cup with a two-second advantage. Germany’s Michael Ammermüller (D/Lechner MSG Racing Team) and Dylan Pereira (Lechner Racing Middle East) from Luxembourg finished in positions two and three respectively. “I’m so incredibly happy to have won a Supercup race for the first time. It’s definitely a very special day for my team boss Walter Lechner, because the first four places were locked out by four Lechner pilots,” said an ecstatic Olsen (Walter Lechner Racing Team) after the award ceremony.

In the free practice on Friday, Olsen had to settle for the second quickest time, however in the qualifying on Saturday he posted pole position. When the race took off on Sunday in temperatures of 20 degrees Celsius, the youngster from the Norwegian town of Våler immediately put several metres between him and the other 32 pilots. In the race watched by large Formula 1 crowds, Olsen gradually increased the gap to his pursuers to ultimately bring home a commanding victory. Behind him a fight for positions raged: Pereira, who had taken up the race from the second grid spot, was overtaken in lap five by Ammermüller.

Pereira, who already achieved a podium result at Spielberg, took the flag in third place after 13 laps. “Michael Ammermüller is an experienced driver who immediately makes the most of any mistake and he overtook me. Still, I’m very happy to hold a trophy in my hands,” said Pereira. Daniel Cammish (GB/Lechner MSG Racing Team) from Great Britain narrowly missed out on a podium result with fourth place, but made the Lechner success perfect. Fifth place went to his compatriot Josh Webster (GB/Fach Auto Tech) ahead of Robert Lukas (Olimp Racing) from Poland.

Porsche Junior Matt Campbell (Fach Auto Tech) occupied seventh place. The 22-year-old Australian was disappointed: “That’s not the result I’d hoped for. We didn’t really have the pace today. I hope that we can follow up on my win from Spielberg at the next round in Budapest,” declared Campbell. Eighth place went to the Italian Mattia Drudi (Dinamic Motorsport). The best amateur driver was Egidio Perfetti (NL/Momo-Megatron Team Partrax), who secured the laurels ahead of Roar Lindland (N/MRS Cup-Racing) and Philipp Sager (A/MRS GT-Racing).

“I’m totally thrilled with my first pole position in the Supercup. I still had another faster time up my sleeve, but shortly before the end of the session it began to drizzle and I didn’t want to fly off the track,” explained Olsen. Taking up the race from second for the first time alongside the Norwegian is Dylan Pereira (Lechner Racing Middle East) from Luxembourg. Josh Webster (GB/Fach Auto Tech) and Michael Ammermüller (D/Lechner MSG Racing Team) occupy the second grid row in positions three and four.

With an outside temperature of 15 degrees Celsius, low clouds hung over the storied British racetrack. After the torrential downpour drama of last year, the 32 drivers went out in search of fast lap times with their new 485 hp Porsche 911 GT3 Cup racers shod with the first set of fresh tyres. Olsen clocked a top time of 2:04.842 minutes after seven minutes, which none of the other pilots managed to beat by the end of the 30-minute qualifying. Ammermüller, who set the second quickest time early in the session, made another attempt on the 5.891-kilometre circuit with nearly six minutes left to the qualifying.

However, two minutes before the end of the session, 20-year-old Pereira edged out the seasoned Porsche rival and snatched position two with a time of 2:04.951 minutes. Webster, who has a great deal of experience at Silverstone, made a successful last-ditch effort to clinch the spot directly behind in a time of 2:05.015 minutes. “I saw raindrops on my windscreen, but still I managed to get a free run at my final attempt. If I could bring home a podium result on home turf tomorrow, well that would of course be fantastic. I’ll do my very best!” Ammermüller ultimately had to settle for position four.

The fifth quickest time went to Porsche Junior Matt Campbell (Fach Auto Tech). “Starting from fifth on the grid at Silverstone makes my job somewhat harder, because overtaking is always difficult in a strong field. The circuit was a little slippery, but the conditions were the same for us all, of course. I’ve never competed here before so we’ll see how things pan out in the race,” said the 22-year-old Australian. Sweden’s Philip Morin (S/Martinet by Almeras) occupied position six. The amateur driver Roar Lindland turned heads with his result. In the 32-strong field, the 40-year-old businessman, who competes for MRS Cup Racing, qualified on seventh. “That’s the best qualifying result that I’ve achieved so far in the Supercup. Obviously I’m proud that I could produce such a good time as an amateur driver,” said Lindland.

Round six of the Porsche Mobil 1 Supercup will be contested on the Hungaroring not far from Budapest from 28 to 30 July.